Beauty and the Beast

Dave Barry in Beauty and the Beast states how women care more about their looks than men do. I can relate to this story because as a woman I know that we care more about looks than man do, we always try and look good for other people as well not only for our loved ones. For a woman our appearance is a big deal and we don’t like to get bad comments about our looks. Most men think of themselves as average-looking as Barry stresses, men never ask for others opinion of how they look while getting ready.

Turn in your highest-quality paper
Get a qualified writer to help you with
“ Beauty and the Beast ”
Get high-quality paper
NEW! AI matching with writer

Their primary form of beauty care is shaving themselves and after a while put their attention in other things, such as sports. Some theories that people believe in, that could be why women care more about their looks than men, start in childhood. Berry states examples such as when females are growing up they play with Barbie dolls. The concept of a Barbie doll is to imitate a human that has impeccable looks and it is the responsibility of the child to brush the doll and keep her looking up to professional fashion standards.

On the converse end of this situation, males go through their childhood playing with action figures.

These action figures are not designed to care about looks, but to care more about acting tough and being brave. Their names portray something that is cool and brave, such as the example that Berry gave, “Buzz-Off. ” When little boys are playing with “Buzz-Off,” little girls are play with Barbie, which is a name of something that is neat and clean.

“If you’re a man, at some point a woman will ask you how she looks. How do I look? She’ll ask. ”` Barry opens his article with this statement; this immediately informs the reader that the article is going to discuss how women care about their looks.

There is a contest here in New Mexico famous in the Hispanic culture that I have attended a few times, Miss Chiquitita were little girls between the ages of 8 to 12 compete against each other and make a runway shows with them modeling dresses, at the end the judges picks a winner, but I have notice that the judges always end up picking the thin little girls, in my point of view this is wrong because the rest of the contestants end up thinking they need to look a certain way in such a young age.

Women always likes to be told that there beautiful at every time of the day. Women’s insecurity about their appearance is driven by competition with other women. We see this quite clearly in connection with the slender standard of attractiveness where women wish to be more slender than men find attractive. The reason, of course, is that they want to beat their competitors – other women. In general, women are much more concerned about their appearance than men are. The key reason for this is that their appearance is central to how they are evaluated by others.

When women ask the men how we look we know the answer, we know that we look good but we just want to hear it from other people because we like to get complemented of our looks. In my personal experience I have the pressure to look good for other people as well because I feel that if I do not look good people will judge me for my appearance. I have noticed that when a group of girls get together they judge each other if they did not get ready, but on the other hand when men do not get ready nobody makes a big deal out of it.

In this generation I think men are starting to take care of themselves more then back in the day. For instance, I have a guy friend that when we get ready to go out he takes as long as I do just to get ready. Men this days are being metro sexual and caring about their looks now a days like women do. But I think the major cause of this is the media because they always show women that look a certain way and they are good looking and famous, so we have that idea of being the definition of good looking and same for guys. In my point of view looks are important because that’s the first impression you give to other people.

Like Dave Barry I agree that women do take much longer to get ready and care more about their looks than man do, but I think we have good reasons for this we just want to feel good about ourselves. It sheds light on a subject that people do not give much thought to, but when they stop to think about it, they do wonder why there is such a different conception of care of looking beautiful among the two genders. This article points out some reasons to why this might be, by identifying the thesis, giving examples to support the thesis, and then giving reasons to why people feel the way they do on the subject.

Beauty and the Beast. (2016, Nov 03). Retrieved from https://studymoose.com/beauty-and-the-beast-2-essay 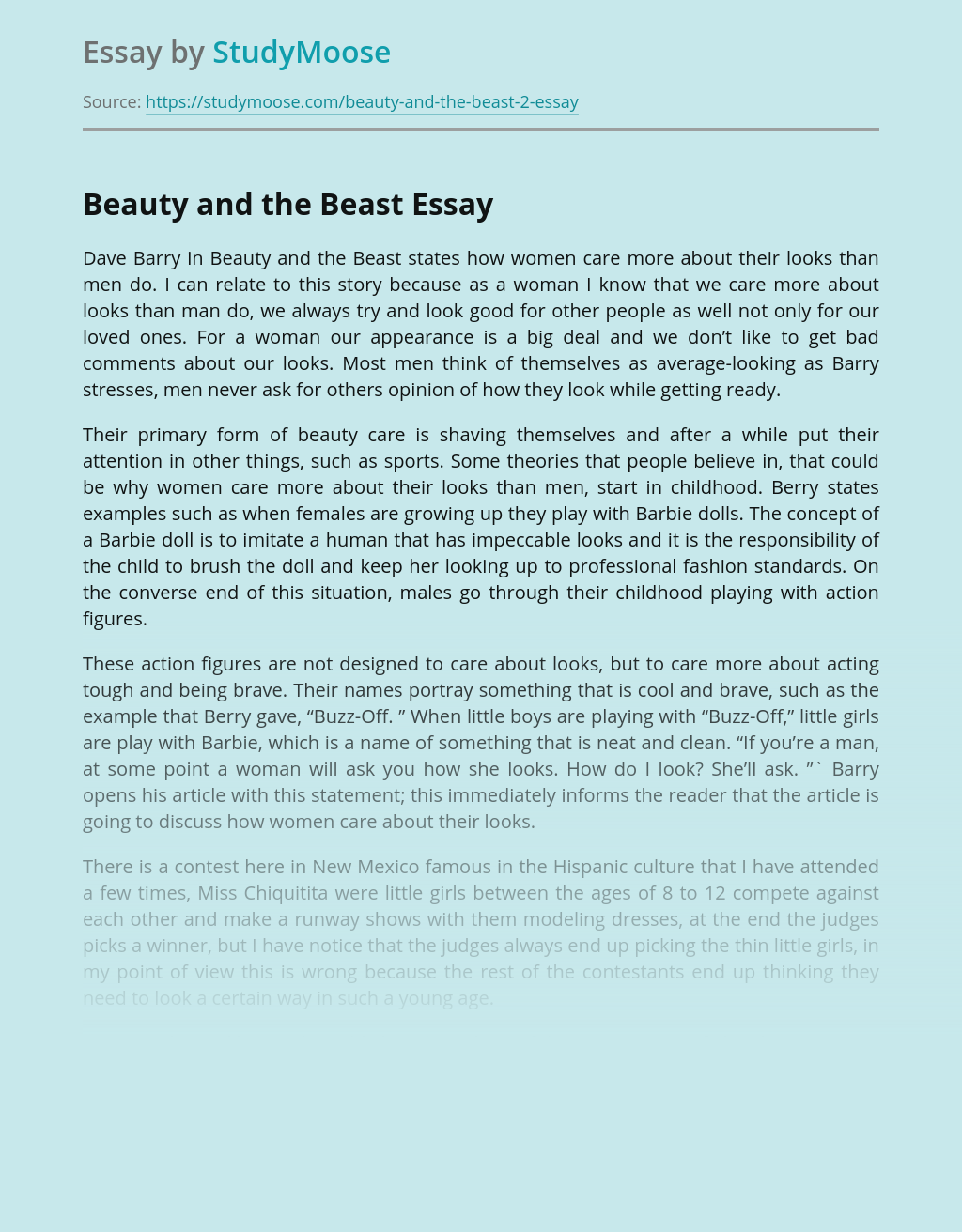 Turn in your highest-quality paper
Get a qualified writer to help you with
“ Beauty and the Beast ”
Get high-quality paper
Helping students since 2015
Stay Safe, Stay Original