The Men we carry in our minds

In Scott Russell Sanders’ essay, “The Men We Carry in Our Minds”, he indicates his perspective through discussing the issues that exist between sex and social class. Sanders’ depicts his thoughts through narration which allows him to portray his own life experiences to support his viewpoint. Sanders’ thesis is fundamentally based on the lives of men “who’ve been discredited” (Sanders 292) and how their lives have been considered easier than the lives of women.

Sanders’ first perspective of the world was on the lives of the poor, working class.

Don't use plagiarized sources. Get your custom essay on
“ The Men we carry in our minds ”
Get custom paper
NEW! smart matching with writer

In the essay he shares his memories from childhood, during which he was witness to what he believed to be the life of luxury for women, which was considered to be the typical house work of cooking, cleaning, and caring for the children. Sanders expressed the lives of men as a day in and day out job of doing the same back breaking labor so that they could support their families (293).

He portrays the graphic details, recalling from his past, of the demanding jobs men endured.

For example, Sanders talks about “the nails of their hands” being “black and split” (293) illustrating that they work tremendously hard and go through a lot of pain to fulfill their duties.

In Sanders’ final point the differences that exist between rich and poor, male and females becomes more vivid when he receives the opportunity to attend college by earning a scholarship where only the wealthy attend (295). This forces Sanders to experience a new world where the women he meets in the college make assumptions about him just because of his sex without knowing about his past (296).

These women assumed that all men were like their fathers, having women to assist them with every need and pleasure they would have (296). These men never had to worry about making the bill at the end of every month nor did they have to ask for any government help unlike the men in Sanders’ social class (296).

What Sanders learns from these women are that the men of the upper class have options that get heard and they have control in the world they live in (296). Through Sanders life experiences he illustrates that the great separation between sex and social class will continue to be a part of how the world functions.

The Men we carry in our minds. (2016, May 18). Retrieved from http://studymoose.com/the-men-we-carry-in-our-minds-essay 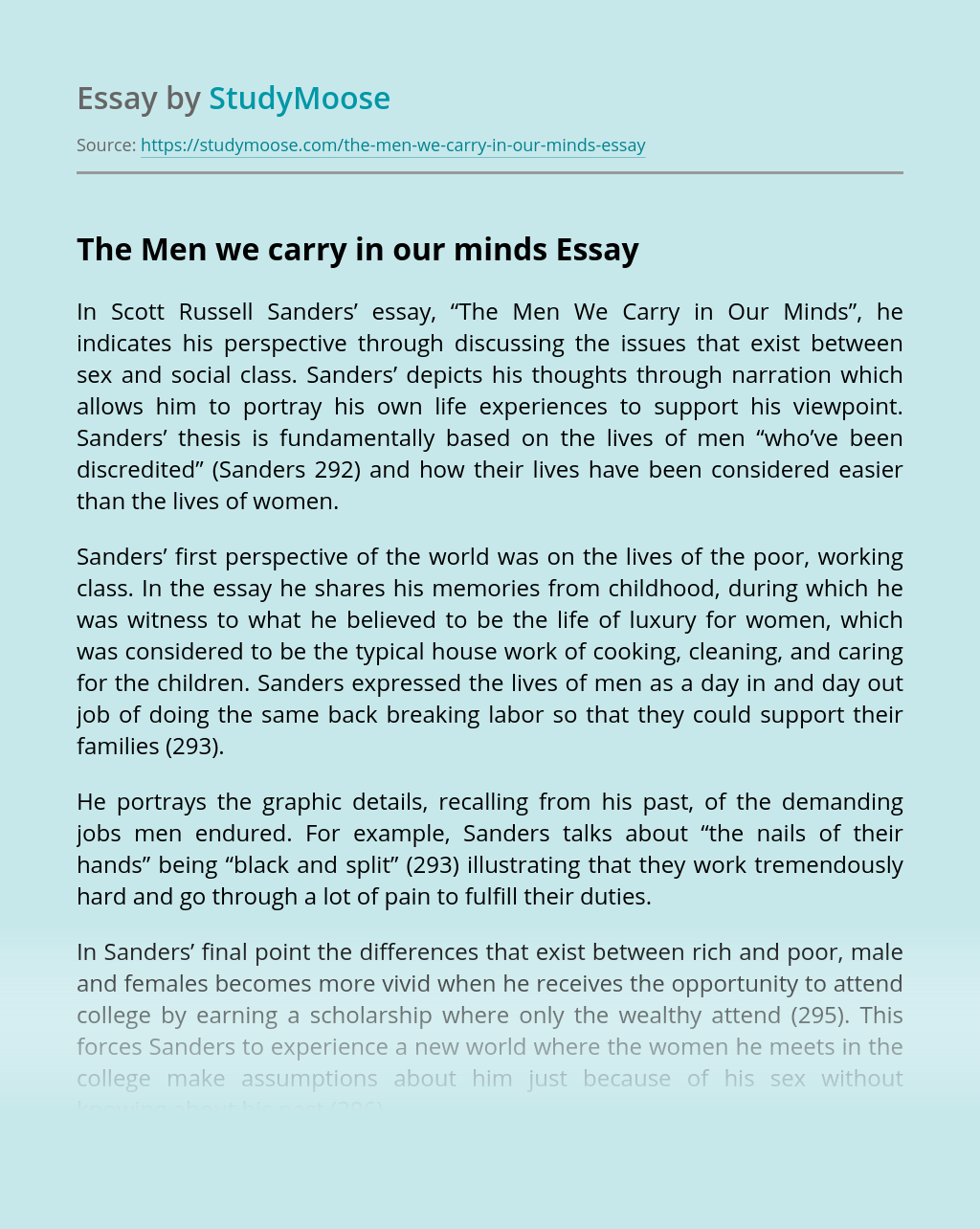