The United States before the civil war was basically split into two regions, the North and the South. These two regions had very different cultures, economics, and climates which led to different life styles and perspectives. Problems caused by the differences between the North and the South eventually led the nation into a great civil war- the bloodiest war in American history.

The North and South had diverse climates and natural features. The North had mainly rocky and infertile lands with humid summers and snowy winters, so farming was difficult.

Don't use plagiarized sources. Get your custom essay on
“ Civil War: North and South Compare and Contrast ”
Get custom paper
NEW! smart matching with writer

Fast moving rivers and waterfalls were common in the North because of the many mountains. As a result, Northerners started to use waterpower to run factories. Meanwhile, in the South, the weather was usually hot and sunny, with lots of rainfall, making the growing seasons longer. The South’s lands were flatter than the North’s, making it a more ideal place for farming.

The Northern and Southern population was very different.

The Northern population between the years 1800 and 1860 increased massively. Because of the large amounts of immigrates from Europe, the North’s population increased from five million to thirty-one million. The South’s population, on the other hand, was made up mostly of enslaved Africans. By 1860, one third, out of twelve million people in the South, was slaves.

The surroundings in the North and South led its citizens to live in contrasting places. In the North, the crowded and dirty cities along the Atlantic coast served as centers of trade and drew laborers to work in towns.

When streets were improved and police forces were created, cities became the center of art, culture, and education. In the South, however, their economy was based on agriculture. As a result, towns were developed slower and trading centers were rarer than in the North.

Because of the climates and geography in these two regions, they developed different economies. Economy in the North was based on many different industries such as shipping, textile, and mining. Because of coal and waterpower, manufacturing in the North developed quickly. Unlike the North’s, the South’s economy was based on agriculture. Crops such as cotton and tobacco made huge profits. Southern farmers had to use large amounts of slave labor for their plantations, so slavery was necessary to the prosperity of the Southern economy.

Northerners and Southerners developed individual cultures. Cities had an important role in determining the North’s culture. New businesses brought new ideas to the North. The Northern emphasis on public education led to many schools and churches. The life in the South was really different than the North’s. The South’s agricultural system was controlled by wealthy planters who lived like the country gentlemen of England. The South had few schools or churches. Rich planters would usually hire private tutors to teach their children until they were sent to private schools.

The biggest difference between the North and the South is that the South had slavery, while the North did not. Eventually, the issue of slavery and the other differences of these two regions led to the American Civil War, which lasted for four years. However, after the civil war, the North and South, like a family, unite together and became one of the most powerful nations in the world. 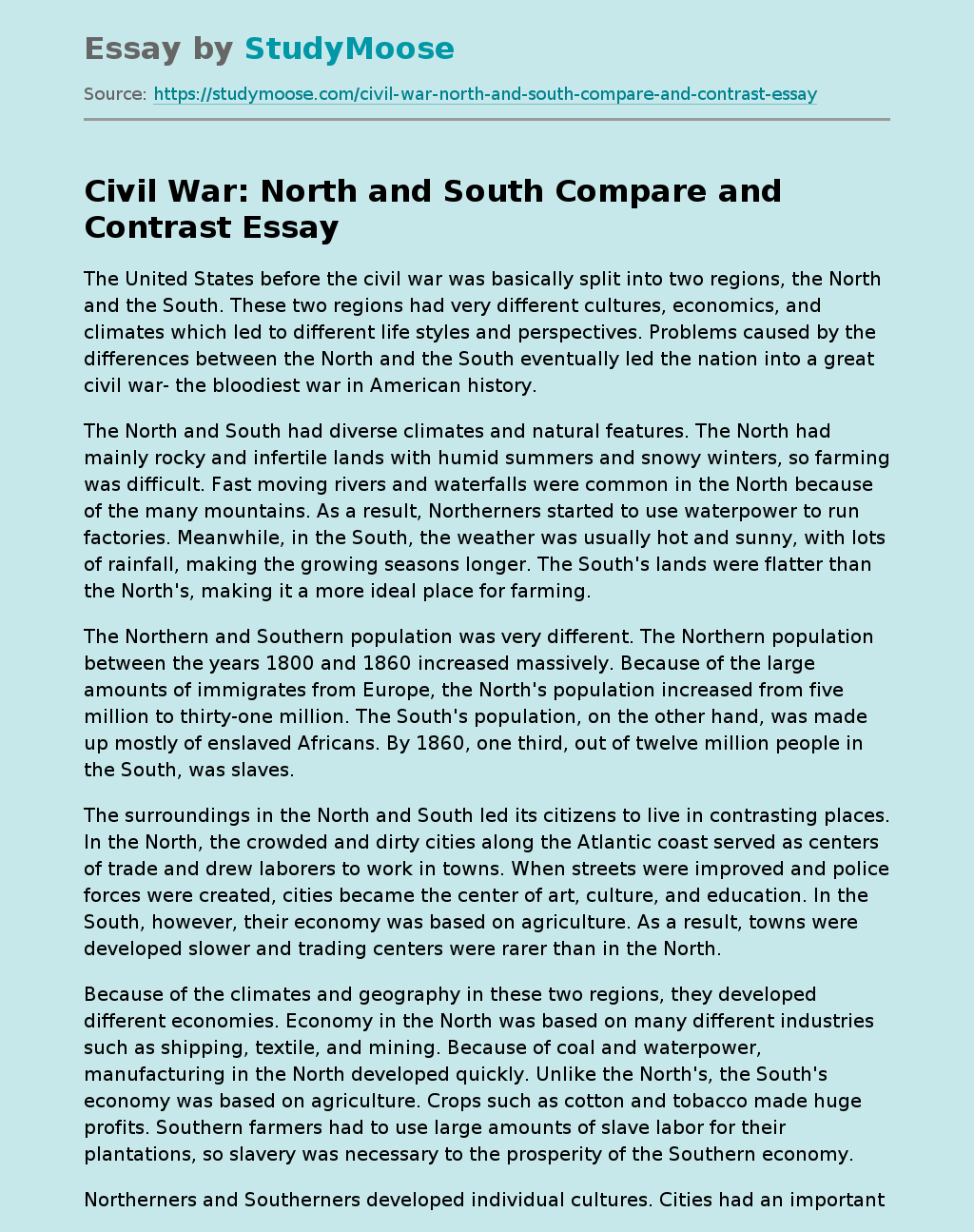