According to the dictionary of Cambridge “materialism” is the belief that having money and possessions is the most important thing in life. In today’s world this notion has a strong place among people-especially in the culture of youth- regardless their social classes.The economic system of our age relies on the customers and consumption therefore the culture of consumption pumped through by advertisements specifically take aim at the youth-which is the largest growing population-, as a result teenagers become more eager to believe in the notion of “You are what you possess”.

Don't use plagiarized sources. Get your custom essay on
“ The Impact Of Materialism in the Youth Culture ”
Get custom paper
NEW! smart matching with writer

Lack of emphasis on moral values and spiritual belief systems by parents, teachers and social establishments- deepens the magnitude of this problem.

On the other hand there is a serious youth movement across the world who opposes global capitalism, which has a huge role in pumping materialism, and state authoritarianism while proposing humanism. To summarize, majority of the youth tend to be more materialistic than to be driven by moral values however there is still a minority who actually be more involved with the ethical principles, democracy and human rights.

Bell Hooks, in an essay on materialism among the youth, points out that: “For young people, the world is their marketplace. All one’s worth, mass media advertising tells them, is determined by material things.” (81). It is true, as the author states, that through mass marketing techniques, the corporates manipulating the consumer demand to the advantage of their business interests and the youth, as a significant part of the society, is their most prominent target as potential customers.

As a part of their strategy those firms have focused on television, internet, newspapers and radio as the media to reach this broad audience. In the advertisements which take place in these mass media organs there is an unreal world demonstrated where there are no social problems, no hardships and where everyone can belong to as long as they have money (Hooks 82).

As a result of this distorted presentation of reality, an impression comes out as if the money is the only answer for seizing the true happiness. Furthermore the young people today identify themselves with their possessions, such as clothes, phones, cars and so on, instead of putting forward their personality and character. All these effects lead to an inevitable psychological concept of materialism which causes the majority of the youth to feel that as if all other values are worthless.

The establishments such as; families, schools, governments who are supposed to educate the youth and raise awareness regarding social issues not only neglecting their responsibilities, but also are sometimes the causes of increased materialism among the teenagers. At birth, a human is a plain portrait. He/she cannot have a view or an idea about the importance of anything in the world. His parents teach him to cry, laugh and smile, then help to understand the some basic values and the primitive social codes. The school and the social environment add some other values to them. A human character is a composition of all these effecting factors. As the education starts at the family, the problem also starts in the family in the first place. The parents of all classes who are themselves critical of worship of money still feel compelled to teach their children that money is the most important thing in life (Hooks 85). They often encourage materialism in their children, by saying “We want you to enjoy a better life than us.”; but implicating that a better life is a life with more money.

As the children grow older, parent involvement declines while the problem still continues to dwell in schools. The educators can not interest enough with their student’s area of interest; hence they could not reach their minds to promote pro-social thoughts, values and behaviours. What causes teaching a tough process is the variety of students. Every student separates by their own history, demands and deficiencies. As a result of this diversity teachers struggle to pay attention to their student’s character development. This challenging situation combined with the unwillingness towards to the humanitarian issues, causes teachers to concern more about exam results rather than moral values. Hereby educators, conduce to the materialistic notion albeit unintentionally. Lack of governmental support regarding teachers’ and parents’ efforts to educate teens is also contributes to this problem. Finally it can be claimed that social establishments lead the issue of materialism in young culture to worse instead of better. Despite these strong facts, we can not claim that the entire youth culture dominated by materialism, there are also considerable amount of humanitarian values which takes place.

It is agreed with Shawn Hettingh’s point that, “ Young people across the globe are starting to create another world, which is defined by its opposition to capitalism and all forms of oppression, and that is based on the respect and dignity of all people” (ilrig.org). Let start with one of the most known youth organizations: The Zapatista movement, which had drawn global support and had created many replicas all around the world. The Zapatistas had arised on when the North American Free Trade Agreement came into the force by the day 1 January 1994. While they couldn’t reach their final goal (to make a revolution throughout Mexico) they had been successful to inspire millions of people to unite in order to change the world dynamics. In recent years dozens of organizations have emerged in order to fight with global capitalism, imperialism, racism and authoritarianism while advocating democracy, human rights and environmentalism.

The main force behind these organizations was the young people. Those teenagers have chosen the path of altruism while putting their selfish interests behind the universal benefits of mankind. Importance of the youth lies within their being the most prominent hope for the future of human progress. As they will originate the next generations as well as families in charge of bringing up the further next generations, the teenagers have a great burden in their shoulders.They have to face with lots of challenges in their life which the most significant ones caused by the concept of materialism. This concept is embraced by the majority of the young people due to the consumpion culture created by the advertisements and the ignorance of social establishments. Although there are also serious youth movements holding on to bodiless values, the notion of materialism is still too strong to cope with. Consequently we can say that; on one side there are individualism and money oriented people while on the other side the humanitarian issues and value oriented people. The destiny of the world likely depends on the winner of this new form of war.

The Impact Of Materialism in the Youth Culture. (2016, May 09). Retrieved from http://studymoose.com/the-impact-of-materialism-in-the-youth-culture-essay 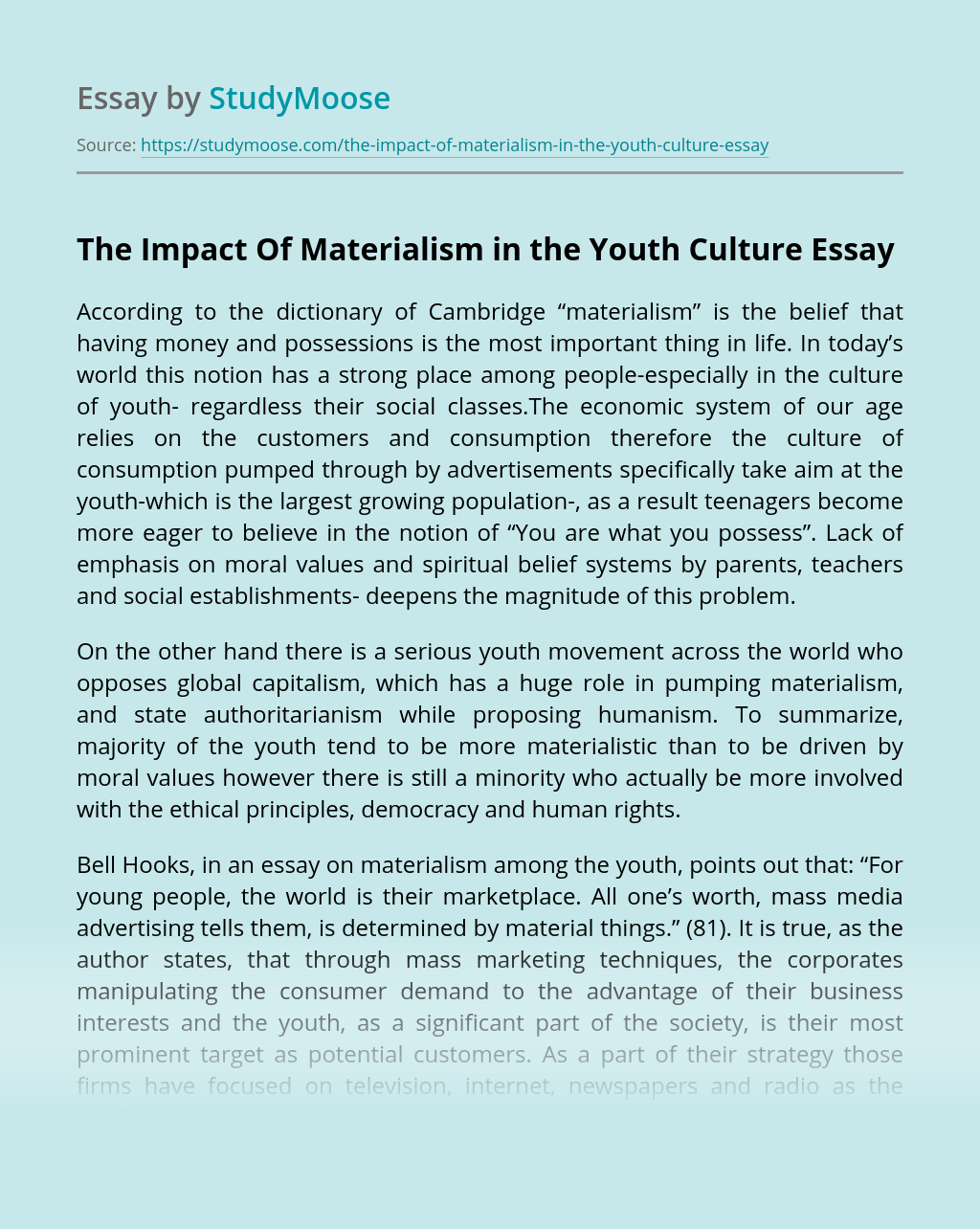