Advantages and Disadvantages of the Materialism

Materislistic Approach of the Presocratics Advantages and Disadvantages

The advantages and disadvantages of the materialistic approach of the pre Socratic philosophers. Please support your points by referring to the texts in Kirk and Raven, and discuss at least three philosophers . The pre Socratic philosophers marked an epoch in human ideas. Although it might seem stupid to suggest that everything is made of water or that the earth floats on a cushion of air, these ideas came from the people who are responsible for the way we see the world today.

Don't use plagiarized sources.
Get Your Custom Essay on Advantages and Disadvantages of the Materialism Just from $13,9/Page

But first a look at something at the cutting edge of modern science that the pre Socratics paved the way for.

At a place known as Cern in Geneva there is a machine called a large hydron collider. A machine that is expected to detect the Higgs Boson or God Particle as it is often called. This is the only standard model particle not yet to be observed and one believed to explain the origin of mass in the universe. You might wonder how this ties in with philosophy in 624 B.C., but it was here that people began their search for the Higgs Boson, although we did not know it by that name at the time. It was the pre Socratics who suggested that there was a basic substance from which all things are made and they who tried to explain what this basic substance was. Considering the lack of facility in around 500 B.C. to experiment and find what this material is made of, it is nothing short of astounding to see how close to the truth some of these philosophers got by using reason and their intellect.

“Within the space of a century Miletus produced Thales, Anaximander, and Anaximenes, each dominated by the assumption of a single primary material, the isolation of which was the most important step in any systematic account of reality”[1] The first of the Ionians was Thales of Miletus. The advantages of Thales’s materialistic approach were as follows: He revolutionised the way the ancient Greeks thought. He got them to recognize rational argument over all other sorts of authority and separated the natural world from the supernatural world.[2] Before Thales explanations of natural events were merited on aesthetic sensibility. The authorities for knowledge were poets like Homer who explained natural events with mythology.

They claimed that divine muses inspired them and people believed that divine humanoid creatures known as the gods controlled nature[3]. Thales however understood that there were laws and routines that nature abided by and that events in the natural world could be predicted by observing the nature and using the information you receive understand it. Thales’s famous prediction of a solar eclipse convinced people to believe that there were patterns in nature which came about from natural events that could be rationalised. One of Thales main philosophical concerns was to find out what the basic substance of the world was. He believed it to be water. Why he believed this can only be speculated. We might see this as naïve but

To begin the search for a rational behind the natural world as Thales did was a giant leap for man kind. His ideas were refined by another Ionian who
was probably a student of Thales. A man called Anaximander.

Anaximander took the basic frame of Thales’s thought and put his own ideas into it. By this I mean he also believed that there was a source substance. However Anaximander’s materialistic approach had an advantage over Thales’s by “separating his explanatory entity from the entities that need explaining”[5]. Anaximander’s physis did not face some of the problems that Thales’s did, such as how is fire explained if everything is water? His explanatory entity was the focal point of his thought. He called it the unbound or apeiron. We cannot observe the Unbound but its existence Anaximander infers because of its explanatory role. This idea of the Unbound had solutions to two problems faced by Thales’s physis: 1) How does the basic substance give rise to the plurality of objects we observe around us? and 2)How does the world maintain itself?.

His solution to problem 2) was: “the natural manifestation of physical law, imposing a lawfulness upon continually struggling opposites, and thereby maintaining equilibrium within the cosmos”[6]. And 1) “In Anaximander’s system the apeiron is both the source out of which everything derives and also the unifier within nature”[7]. I would like to also note startling evidence of Anaximander’s genius is his work in zoogony. “His intelligent observation that man (with nine months gestation and many years helplessness) could not have survived the primitive conditions without protection of some kind”[8] Shows for sight to Darwin’s theory of evolution.

This essay will now deal with Heraclitus as his approach to answering what the nature of the universe was slightly different. The advantage of his philosophy was that it shed light on ideas that hadn’t been considered before. Heraclitus theory was that there was a law by which all things abided which he called the logos. He believed that everything was in opposition the strife between these opposites was what kept balance making all things one. He also claimed that everything was in a constant state of change, like a river is constantly flowing or in constant flux it is always the same river but always completely different. “Heraclitus’ thought possessed a comprehensive unity which seems completely new. Practically all aspects of the world are explained systematically, in relation to a central discovery that natural changes of all kinds are regular and balanced, and that the cause of this balance is fire, the common constituent of things that was also termed their Logos.”[9] It is this idea of fire being that is the main disadvantage of Heraclitus’s approach. It is like taking a step forward with the logos and then going to steps back to the idea that one of the elements is the basis of all things. Although the idea of an all consuming fire does describe his Logos well it works better as a metaphor to describe the Logos than fire being the Logos itself.

To conclude the materialistic approach of the pre Socratics had many advantages. It was the catalyst for modern thought and it can be seen as the beginning of philosophy and science as we know it today. The use of rational argument over super-natural forms of authority showed that people’s thoughts could be progressed and altered by people to come after them. It is true that philosophy is a continuous dialogue that continues through the generations which has created a subject that can be said to define humanities search truth. The progression of thought because of this approach has lead to how we think today. The essay has outlined how Thales, Heraclitus and Anaximander made observations about the world that showed rational approaches to describe what the temporal world is. We still use this approach to find the Higgs Boson however we have the equipment to test our theories. It was a disadvantage of the pre Socratics that their theories were often far beyond their means of testing. But in conclusion the materialistic approach of the pre Socratic philosophers was a step in the right direction for philosophy.

Advantages and Disadvantages of the Materialism. (2016, Jun 06). Retrieved from https://studymoose.com/advantages-and-disadvantages-of-the-materialism-essay 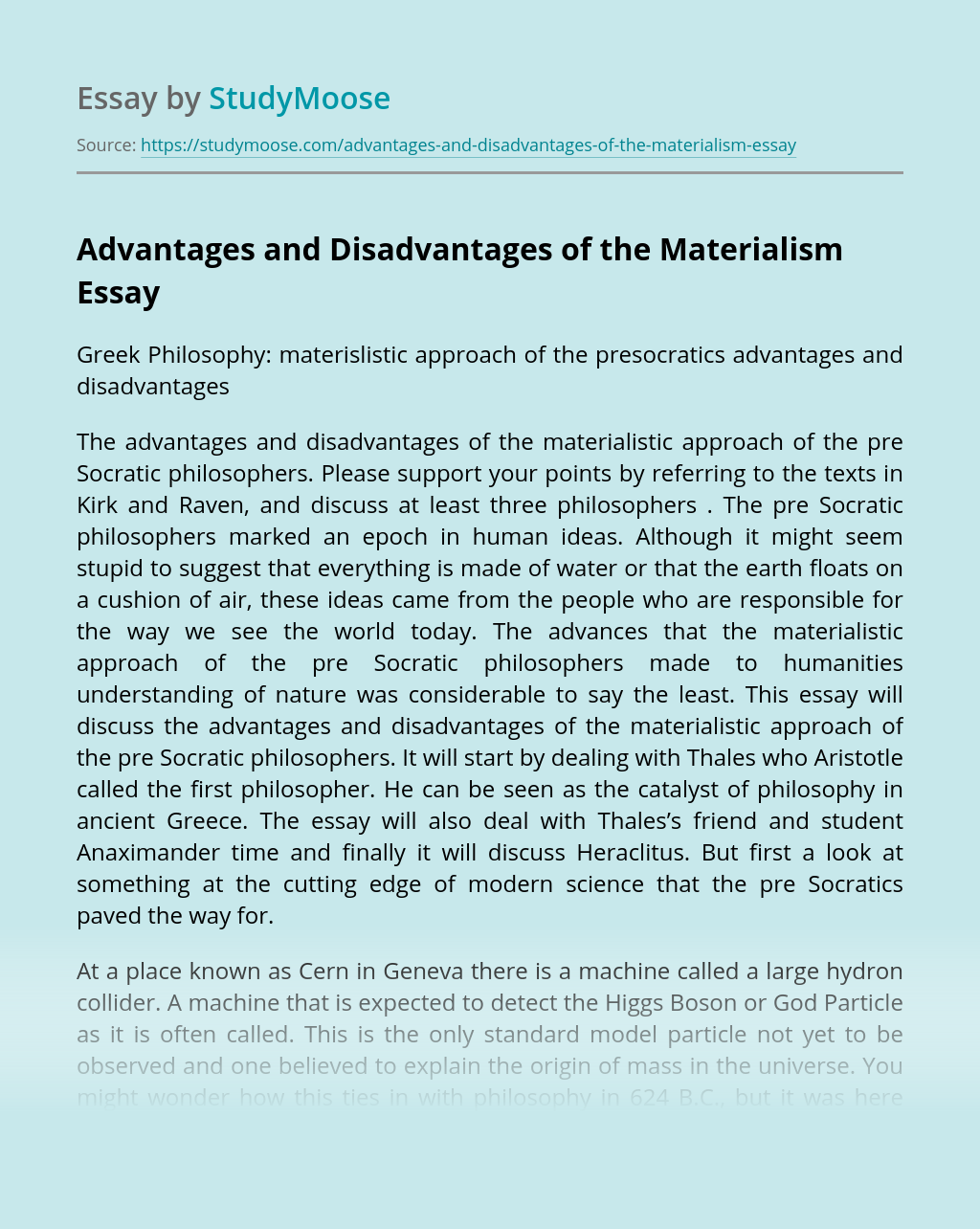 My Favourite Place in the World

I live in a place full of anguish and despair. Where the weather is never jubilant. Everyday is a constant battle against the gale forced frozen winds incoming from the Atlantic. The ceaseless ringing that overcame in every direction of everyone in a hastiness to get to where ever they need to be. There is...

Tuberculosis (TB), also known as consumption, is an infectious disease caused by the bacterium Mycobacterium tuberculosis (MTB). TB is the leading cause of death in the world among reported deaths caused by a bacterial infectious disease. The disease affects 1.8 billion people per year, which is equal to one-third of the entire world population (Todar)....

Get Essay
Foreshadowing In "The Lottery"

Shirley Jackson depicts a special day, June 27, in the lives of the inhabitants of a small, apparently serene village. The use of foreshadowing is applied extensively to hint to the reader that despite the seemingly festive occasion, there is something morbid about the lottery that causes the people of the town to be uneasy....

1. Introduction This assignment entails the details of procurement processes and the comparison of 3 various organizations that we have selected– the Minimart, Online shop and Animal product markets. Although they are all micro organisations and retailers in the supply chain, they encompass private requirements and choice requirements of their procurement procedures. In this task,...

The rattrap seller is a homeless fellow who remains in the crofter’s cottage for a night. The crofter amuses him as a guest and friend. But the rattrap seller returns later the next day, smashes the window pane and steals the cash of the crofter. The fortune nevertheless turns later when the iron master misinterpreting...