American Dream and Materialism in The Great Gatsby

Have you ever wanted a part of the American Dream so bad that materials are the things that make you happy instead of people? In “The Great Gatsby”, by F. Scott Fitzgerald, this is seen happening sometimes. “The Great Gatsby” was published on April 10, 1925. This novel is famous for capturing the theme of the 1920s. It also shows how America was obsessed with social status and wealth after the war. I think the theme of this story is the decline of the American dream in the 1920s.

Don't use plagiarized sources. Get your custom essay on
“ American Dream and Materialism in The Great Gatsby ”
Get custom paper
NEW! smart matching with writer

Materialism plays a big part in this story, especially with the American Dream. With the concept of materialism, it was clearly evident that it has played a major role in how society has been over the past century. With that in mind, the characters in “The Great Gatsby” present the concept of materialism and its connection with the American dream effectively in the sense that being successful and happy was a direct result of their wealth and social status.

Materialism is a tendency to consider material possessions and physical comfort as more important than spiritual values. Characters like Myrtle, Gatsby, and the Buchanans show this playing a big part in their lives. Myrtle Wilson was a woman who had a husband that had a failing garage business. She lived above the garage with him, and he did not have good business. Myrtle and Tom have an affair, and he buys an apartment for the two of them to go to when they meet up with each other.

It was said in the story, “… she selected a new one, lavender-colored with gray upholstery.” (Fitzgerald 27) She had let four other taxis pass by her before she saw this one, and apparently, it looked better to ride in than all the other taxis. Myrtle buys things with Tom’s money when he is with her, “… she bought a copy of Town Tattle and a moving-picture magazine, … some cold cream and a small flask of perfume.” (Fitzgerald 27) I think that it was unnecessary to buy these items, but it probably made her happy to be able to buy materialistic items. When they get to the apartment, Nick describes it as “The living-room was crowded to the doors with a set of tapestried furniture entirely too large for it…” (Fitzgerald 29) They bought fancy and extravagant items with Tom’s money for an apartment that two cheaters share together. Myrtle invites friends over to the apartment and comes out in a nice dress, and a friend compliments the dress. Myrtle says, “I’m going to give you this dress as soon as I’m through with it. I’ve got to get another one tomorrow.” (Fitzgerald 36) She acts like the dress means nothing to her when it probably does mean something to her considering that it is something very nice that she owns.

The American dream is the idea that every US citizen should have an equal opportunity to achieve prosperity and success through hard work, initiative, and determination. In the story, Gatsby works hard to achieve what he thinks will be necessary items for his future goals. Even if some of Gatsby’s jobs were probably not legal, he did work hard with determination to reach his success and happiness. “He stretched out his arms toward the dark water… I… distinguished nothing except a single green light, minute and far away… When I looked once more for Gatsby he had vanished.” (Fitzgerald 24) Gatsby had everything that he strove for in the American Dream, but he just wanted Daisy in his life than to be complete. He was looking across the water to what he thought was Daisy’s house. “Gatsby believed in the green light, the orgastic future that year by year recedes before us. It eluded us then, but that’s no matter – tomorrow we will run faster, stretch out our arms farther…” (Fitzgerald 180) This is from Nick’s perspective, and he is saying that Gatsby just had to reach a little further with a more determination to reach his success of getting Daisy back with him. “Whenever you feel like criticizing any one,”…, “just remember that all the people in this world haven’t had the advantages that you’ve ad.” (Fitzgerald 1) I feel like this made Gatsby want to work even harder for his future happiness.

Materialism has changed dramatically from the time of the 1920s to now as people are not relying on wealth and their social status in order to be happy and successful today. However, one can still argue that obtaining the American dream could only be achieved by the purchasing of materialistic items. The American dream was designed so that people could come to America, build a life here, and enjoy rich prosperity instead of focusing on the materialistic lifestyles that many wealthy people enjoyed. In principle, it matters in society today because we are trying to get away from the concept of materialism in favor of a life that is beneficial for many people who want to be successful and happy in obtaining the American dream through hard work and determination.

American Dream and Materialism in The Great Gatsby. (2021, Mar 06). Retrieved from https://studymoose.com/american-dream-and-materialism-in-the-great-gatsby-essay 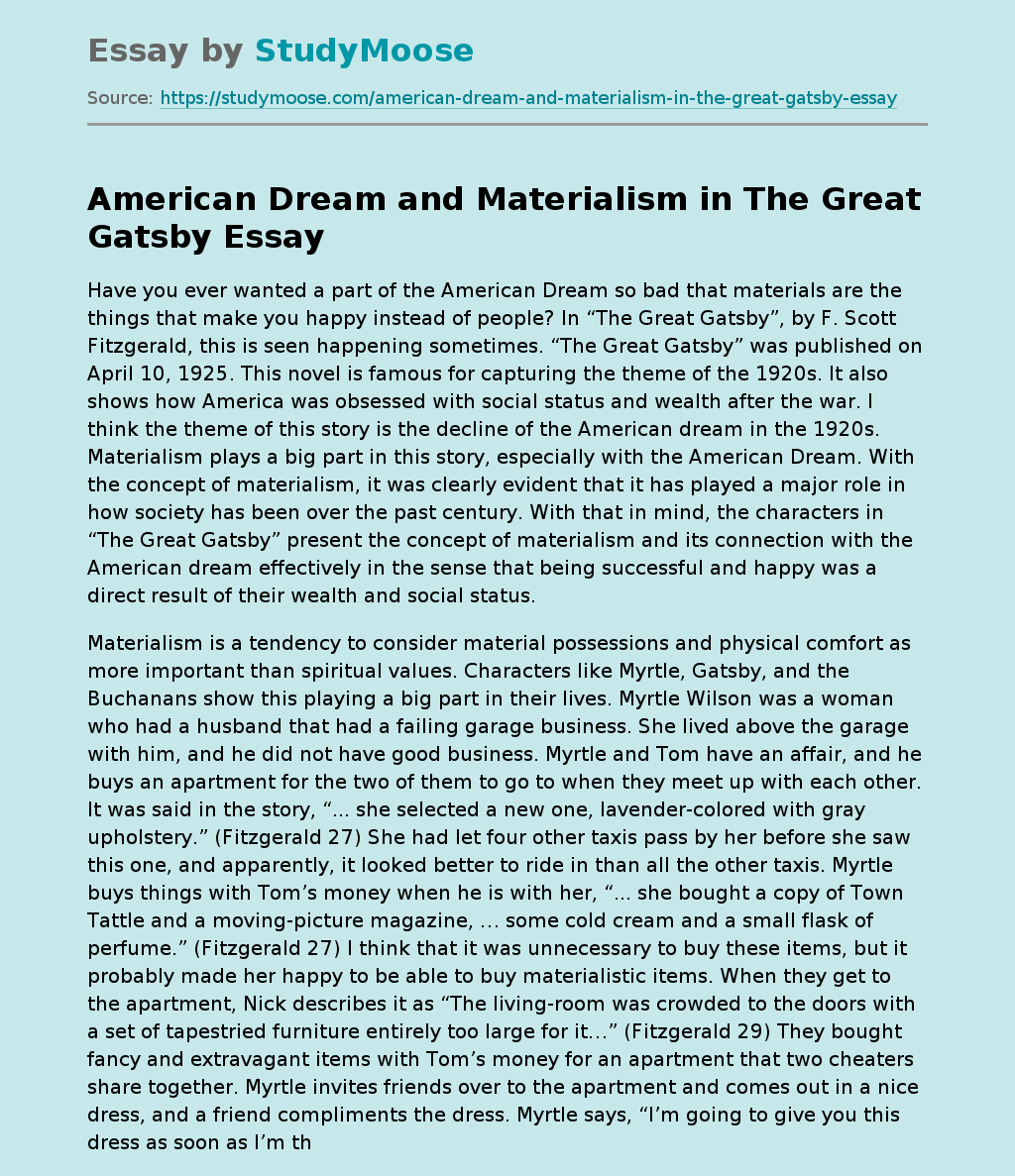