The Illusion of the American Dream in "The Great Gatsby"

Parties with hundreds of guests, a towering mansion, and a superfluous amount of luxury items seems like the definition of success, however not all desires can be fulfilled by material items. In the book The Great Gatsby, Jay Gatsby is a prime example of a young American searching for success in both money and people. With his “rags to riches” background, Jay Gatsby is set on the pursuit of happiness, looking for satisfaction in his heightened expectations of wealth and love, but eventually learns that the true “American Dream” of excessiveness and what appears to be the ideal lifestyle is actually just a false reality that mask’s the true emotion of a person’s desire or feeling.

Don't use plagiarized sources. Get your custom essay on
“ The Illusion of the American Dream in “The Great Gatsby” ”
Get custom paper
NEW! smart matching with writer

In the story, author F. Scott Fitzgerald utilizes the symbolism behind specific colors to add depth to objects in the book, which furthers connections to characters and themes in the text. In addition to colors, items such as Gatsby’s luxurious mansion are used to symbolize Gatsby’s overall feeling of emptiness.

Finally, characters like Daisy Buchanan contrast Gatsby’s elaborate expectations of success and love to realism, while also highlighting the comparison of reality and ideals in general. In The Great Gatsby, Fitzgerald uses many symbols and characters such as colors, Gatsby’s home and lifestyle, and Daisy Buchanan to convey the theme of unmet expectations and dissatisfaction regarding the American Dream throughout Gatsby’s life.

Throughout the book, Fitzgerald’s use of colors and their symbolism adds a lot of depth and meaning to the overall plot.

Detailed and specific descriptions help to effectively convey the intended theme to the reader, by creating another whole layer of interpretation. One of the most mentioned colors in the book is green, which is said to represent hope as well as Gatsby’s excessive wealth. An example of the use of green in the text is the “green light” on Daisy’s dock that can be seen from Gatsby’s house across the lake. The green light symbolizes Gatsby’s dream of rekindling his love with Daisy, as well as reminding him of his bittersweet past with Daisy years ago. Gatsby is often found standing on his own dock and gazing across the water at the green light, reflecting upon his undying love for Daisy and the small but undeniable distance between them. As the artificial and arresting green light beams back at Gatsby, it serves as another symbol of Gatsby’s artificial and fabricated fantasies that are unrealistic and contaminate his perception of reality even further. Elaborating on the use of green in the book, Nick Carraway observes that “Gatsby believed in the green light, the orgastic future that year by year recedes before us. It eluded us then, but that’s no matter—tomorrow we will run faster, stretch out our arms farther…. And then one fine morning—So we beat on, boats against the current, borne back ceaselessly into the past.” (pg. 153). Nick relates Gatsby’s deep connection between the green light and Daisy to Gatsby’s unyielding faith in true love, saying that Gatsby’s optimism and anticipation of the restoration for his and Daisy’s dream-like relationship consumes so much of Gatsby’s attention that he is unaware of the fleeting present, which eventually leaves him with nothing but the past to fill his thoughts. Another example of color symbolism in the text is Daisy’s name. A daisy is a type of flower that is typically made up of yellow center surrounded by white petals. The color white represents innocence and purity, whereas yellow commonly stands for happiness but can also represent cowardice and deceit. Interestingly, Daisy’s character in the book seems to be innocent and pure, however she is capable of corrupted and coward-like actions such as marrying Tom solely for financial purposes or having an affair with Gatsby while leading him to believe that she will eventually leave Tom.

In the book, Gatsby’s sumptuous mansion is a very common setting and point of interest for many characters throughout the text. Gatsby’s home hosts the numerous renowned parties and decadent social gatherings, while also serving as a subject of beguile and curiosity as it is home to the unknown and mysterious Jay Gatsby. His lavish mansion is obviously a large token of Gatsby’s similarly opulent lifestyle, however Gatsby’s home also helps to resemble his growing loneliness as he slowly realizes that despite having all the possessions one could possibly want, he is unable to attain what he truly desires which is Daisy’s reciprocated love, even though she was the entire reasoning behind Gatsby’s purchase of his home. In spite of his admirable economic progress in his lifetime, Gatsby continues to feel dissatisfied with his life and current state. Nick describes Gatsby’s home as a “colossal affair by any standard… a factual imitation of some Hôtel de Ville in Normandy, with a tower on one side, spanking new under a thin beard of raw ivy, and a marble swimming pool, and more than forty acres of lawn and garden.” (pg. 5) The overwhelming appearance and value of Gatsby’s home as depicted by Nick furthers the symbolism of the extravagant mansion, as it acts as a mask for Gatsby’s honest emotions by compensating for the missing feelings of Daisy’s love with the exorbitant amount of luxuries. Continuing his observation of his neighbor’s lifestyle, Nick states that there was often a tumult of lively music and cheers flowing from Gatsby’s estate, and that on weekends his Rolls-Royce could be seen bussing people in from the city from morning to even earlier the next morning creating a constant stream of new faces entering Gatsby’s front doors. He would often see adults and children alike gather in Gatsby’s well manicured lawns and florid gardens, sparsely enjoying each other’s company but more importantly basquing in Gatsby’s unimaginable lifestyle of prodigality. Gatsby’s home and Jay Gatsby himself seem to only become more palatial the more people began to take advantage of Gatsby’s generous tendencies and seemingly infinite resources. In return, Gatsby continues to feel and absence of human connection as his so called “guests” appear to only develop surface level relationships with Gatsby, if any relationship at all. Gatsby is left feeling sequestered and longing for mutual affinity, and is desperate enough to repeatedly invite Nick over for a motley of activities.

Daisy Buchanan is established as Gatsby’s truest and deepest desire, but this does not make her immune to Gatsby’s overactive imagination and consequently immense standards. As Gatsby begins to grow closer to Daisy again, he is disenchanted to find that she is not the same girl she was years ago before he left for war, let alone exactly how he envisioned her to be now. It was inevitable that Daisy would fall short of Gatsby’s hopes, not because of anything she could do or control, but because of the sheer caliber of Gatsby’s illusion. Gatsby’s expectation had become so vivid, with Nick saying that “It had gone beyond her, beyond everything. He had thrown himself into it with a creative passion, adding to it all the time, decking it out with every bright feather that drifted his way.” (pg. 95). Gatsby simply thought about Daisy to such an extent that it became inconceivable for her to satisfy his exponentially growing expectations of their relationship. Gatsby’s vision and illusion spiralled out of plausible reason over the post-war time period, affecting not only Gatsby’s perception of himself, but his perspective of his relationship with Daisy and perception of Daisy herself. Gatsby was imagining a satisfying and long awaited feeling of completion when he and Daisy were reunited at last, wanting “nothing less of Daisy than that she should go to Tom and say: “I never loved you.” (pg. 109), yet this isn’t how the events actually unfolded. Even though Gatsby appeared happy about his renewed relationship with Daisy, he couldn’t help but have a subtle feeling of disappointment due to the looming expectations he had unconsciously placed inside of his head. Gatsby’s overall struggle to revive the connection between him and Daisy further deepened the feeling of emptiness already formed by other items and thoughts, establishing a strong message of disappointment throughout his life and leaving Gatsby feeling incomplete.

Gatsby’s unfulfillable perceptions and expectations, similar to the meretricious draw of the “American Dream”, seemed ideal and desirable however were overall unrealistic. The failure to achieve such unattainable dreams creates the strong themes of disappointment and loneliness, which showed strongly in Gatsby’s developing character throughout the novel. Symbolism behind certain items, such as the “green light” and Gatsby’s echoing mansion, and their connections to Gatsby’s strongest desire, Daisy, helped to develop the theme constant dissatisfaction. The Great Gatsby utilizes the effect of symbolism by using symbols such as colors, Gatsby’s home, and Daisy Buchanan to unmask the illusion that Gatsby faces during his pursuit of the “American Dream”.

The Illusion of the American Dream in "The Great Gatsby". (2021, Mar 26). Retrieved from https://studymoose.com/the-illusion-of-the-american-dream-in-the-great-gatsby-essay 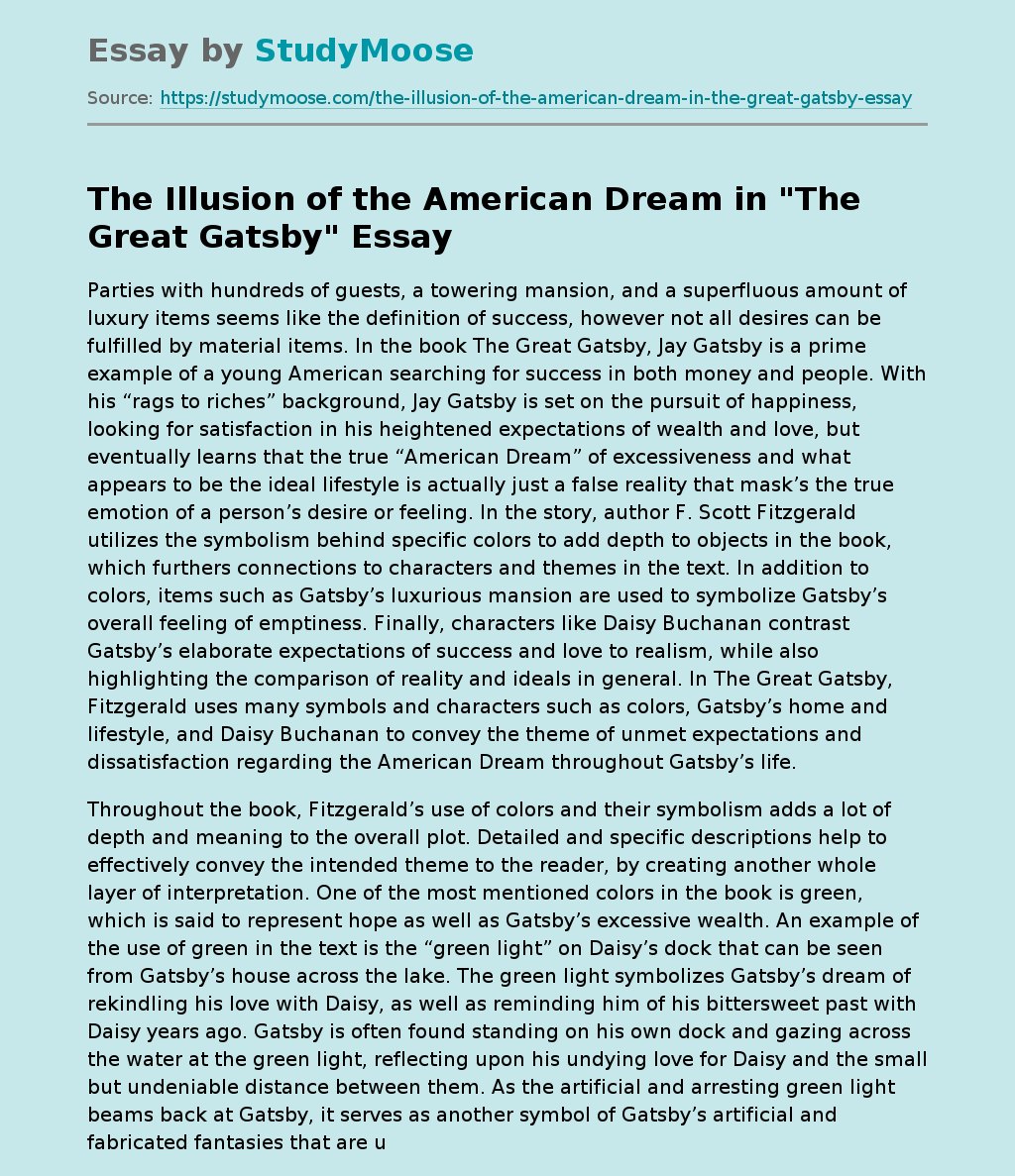