The Great Gatsby and the American Dream

As Lenny Wilkens explains, the American Dream is not an inevitable realization. There is no certainty that one can obtain their American Dream. One must work hard and be dedicated in order to achieve it. However, this dream is sometimes out of reach and impossible to obtain. For example, during the 1920’s many individuals pursued the dream of becoming rich and prosperous. Then, in the early 1930’s the Great Depression hit America and their hopes were destroyed by a dwindling economy.

Don't use plagiarized sources. Get your custom essay on
“ The Great Gatsby and the American Dream ”
Get custom paper
NEW! smart matching with writer

F. Scott Fitzgerald presents the same idea of an unattainable dream in the novel, The Great Gatsby.

One of the main characters, Jay Gatsby, falls in love with Daisy, but he is unable to stay with her because he is poor. He devotes his life to fulfilling his American Dream of marrying her and living the rest of his life with her. However, he cannot see that Daisy has moved on with her life without him. Through the use of episode, character and symbol in the novel, we can see that Gatsby pursues his American Dream, determined that he will achieve it, however, oblivious to the fact that it is unattainable.

During the episode when Nick explains Gatsby’s early encounters with Daisy, we can see that Gatsby is lured into the illusion that he can be with Daisy, but he doesn’t see that his dream is not possible.

When Gatsby first meets Daisy, he puts on a persona that allows him to temporarily be with her: “However glorious might be his future as Jay Gatsby, he was at present a penniless young man without a past, and at any moment the invisible cloak of his uniform might slip from his shoulders… eventually he took Daisy one still October night, took her because he had no real right to touch her hand” (156).

Because of Gatsby’s social status, he does not belong with Daisy. However, he is so obsessed with the idea of being with her that he lies to her and shows that he is a wealthy person. He thinks that he can become wealthy enough in the future and earn the right to marry her.

However, this accomplishment would take far too long for Daisy to wait for him. When Gatsby is a young man, he realizes that he cannot be with Daisy at the moment because of his social status: “He found that he had committed himself to the following of a grail… She vanished into her rich house, into herrich, full life, leaving Gatsby—nothing. He felt married to her, that was all” (156-157). Gatsby realizes that it is impossible to be with Daisy while he is poor, so he commits himself to obtaining material possessions to impress her and get her to love him again. What he cannot understand is that Daisy does not feel the same way about him as he does about her.

Gatsby creates an illusion that she will wait for him until he is worthy of her social status, but his illusion is misleading. Daisy cannot wait for Gatsby because she wants to move on with her life: “She wanted her life shaped now, immediately—and the decision must be made by some force—of love, of money, of unquestionable practicality—that was close at hand” (159). After Gatsby left for the war and did not see Daisy for a long time, his love for her was still strong. However, her ephemeral love for him could not last. Daisy believed that she should find someone who could love and support her. She did not wait for Gatsby because she needed to find someone and move on with her life. Gatsby cannot come to the realization that he had lost her in the gap of their social statuses. Therefore, he dedicates himself to an unattainable American dream.

Through the episode explaining Gatsby’s initial interactions with Daisy, the novel shows that a person can be lured into following the ghost of an American dream. The character Jay Gatsby is determined to achieve his dream of marrying Daisy, but he is unable to see that this dream cannot be reached. Nick, the narrator of the novel, explains that Gatsby has a significant quality of pursuing his dreams: “ If personality is an unbroken series of successful gestures, then there was something gorgeous about him, some heightened sensitivity to the promises of life, as if he were related to one of those intricate machines that register earthquakes ten thousand miles away” (6). Gatsby has the quality of determination to get what he wants. His dream of marrying Daisy seems like a promise of life to him and he expects it to come true

. Although this dream is very distant, Gatsby has no doubt that he will succeed in achieving it. When Gatsby meets up with Daisy for the first time in years, he becomes very nervous and acts in a different manner: “Gatsby, pale as death, with his hands plunged like weights in his coat pockets, was standing in a puddle of water glaring tragically into my eyes” (91). When Gatsby is finally face to face with his ultimate dream, he does not want to mess up the situation. Daisy is very important to him and he has a lot of pressure on him to impress her. He is overwhelmed by this pressure and seems to be very uncomfortable with the fact that he might lose his dream.

Nick explains that Gatsby’s dream is one built on immoral grounds: “It is what preyed on Gatsby, what foul dust floated in the wake of his dreams that temporarily closed out my interest in the abortive sorrows and short-winded elations of men” (6-7). Gatsby is so obsessed with being with Daisy that he cannot understand that what he is trying to accomplish is both immoral and selfish. By seeking Daisy’s love, he is trying to end Tom and Daisy’s marriage.

His desire to be with Daisy creates an illusion in his mind that Daisy had never loved Tom and had only loved him, but he cannot see that this is not the case. He doesn’t understand that Daisy had moved on without him and that his dream cannot come true. Through the use of the character, Jay Gatsby, the novel exemplifies the fact that the American dream is sometimes out of reach. In the novel, a green light at the end of Daisy’s dock symbolizes the unreachable dream for Jay Gatsby.

Nick sees Gatsby standing at the edge of the water, gazing toward Daisy’s house: “He gave a sudden intimation that he was content to be alone—he stretched out his arms toward the dark water in a curious way, and far as I was from him, I could have sworn he was trembling. Involuntarily, I glanced seaward—and distinguished nothing except a single green light, minute and far away” (25-26). Gatsby views this green light as a representation of Daisy and the future. Its presence alone gives Gatsby hope that one day he will achieve his dream. However, this light is far away, across an entire lake, representing Gatsby’s inability to fulfill his desired future. After Gatsby discusses the green light with Daisy, he believes that his dream is not so far after all: “Daisy put her arm through his abruptly but he seemed to absorb what he had just said.

Possibly it had occurred to him that the colossal significance of that light had now vanished forever” (98). Gatsby and Daisy meet up for the first time and tour his mansion. Daisy seems impressed, but Gatsby views her reaction as more significant than it actually is. Now that Gatsby thinks that his dream is becoming real, he views the green light differently. To Gatsby, it no longer symbolizes the fact that Daisy is far away.

In this manner, Gatsby is lured into believing that his dream is obtainable. Nick explains that the green light signified hope for Gatsby, but he didn’t realize that this hope was false: I thought of Gatsby’s wonder when he first picked out the green light at the end of Daisy’s dock. He had come a long way to this blue lawn and his dream must have seemed so close that he could hardly fail to grasp it. He did not know that it was already behind him… Gatsby believed in the green light, the orgastic future that year by year recedes before us…

So we beat on, boats against the current, borne back ceaselessly into the past (189). The green light was a guiding force for Gatsby in that it would remind him of the great future that he thought he could have. He had worked so hard to obtain his dream, but his future was not certain, like he believed it was. Nick explains that Gatsby was never moving toward the future, but he was always stuck in the dissatisfaction of the past. The green light is a symbol of Gatsby’s impractical American dream; despite his overwhelming desire to be with Daisy, Gatsby’s dream cannot be reached.

Jay Gatsby, through his obsession with Daisy, creates an illusion that Daisy had always loved him and wanted to be with him. He becomes tempted to pursue his dream of being with Daisy, but he is oblivious to the fact that she does not share the same goal. While she moves on with her life, Gatsby is stuck trying to solve the problems of his past. He follows a dream that was never possible to achieve. Although Gatsby is determined to fulfill his dream and dedicates himself to it, his dream is impossible. Gatsby is ultimately lured into pursing an unattainable American dream, one that leaves him lost in the past.

The Great Gatsby and the American Dream. (2016, Apr 29). Retrieved from https://studymoose.com/the-great-gatsby-and-the-american-dream-essay 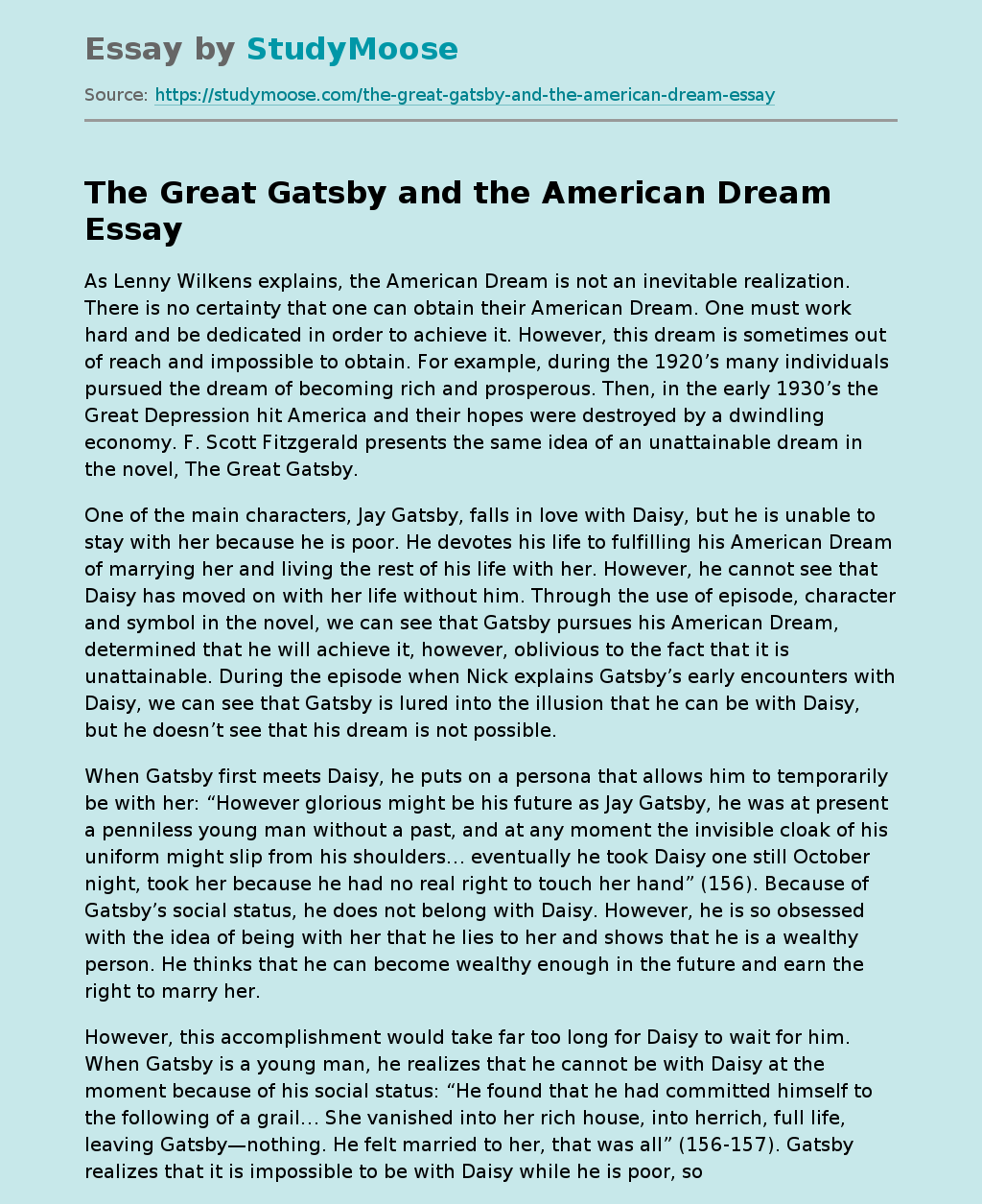