In the quest for the American Dream, numerous values can be misleading, this is reflected in the novel The Great Gatsby by F. Scott Fitzgerald and the play Death of a Salesman by Arthur Miller. Both of these works exhibit the lengths that a few people will go to as to accomplish the cliché life of a rich, fruitful, and incredible American, which is regularly alluded to as the American dream. Even though it might appear as though The Great Gatsby is depicting a sentimental American dream of love, Death of a Salesman is depicting a rich, successful American dream, which they both were aiming for happiness.

Don't use plagiarized sources. Get your custom essay on
“ The Concept of the American Dream in Great Gatsby and Death of a Salesman ”
Get custom paper
NEW! smart matching with writer

The American Dream originated when immigrants came to America searching for new opportunities and a better life than they had in their country. The dream was changed from being attained to being barely reached. A lot had to do with this because everyone’s interpretation of happiness is different from Gatsby’s and Willy’s.

They had different perspectives on what their fantasy of the American dream was. Jay Gatsby’s fantasy was to get as rich and as ground-breaking as imaginable to win over his love, Daisy Buchanan. “He talked a lot about the past, and I gathered that he wanted to recover something, some idea of himself perhaps, that had gone into loving Daisy.”( Fitzgerald 110).

On the contrary, Willy Loman’s then again, was to wind up effective from being ‘famous’ and very much properly-liked. “The man who makes an appearance in the business world, the man who creates personal interest, is the man who gets ahead.

Be liked and you will never want.” (Miller 33). The two of them take the necessary steps to have a go at achieving this fantasy although they end in a catastrophe. The frustrated vision of joy speaks to their awful defect because, in their quest for happiness, they forget about their joy, mistaking it for insatiability.

Both Willy’s and Gatsby’s defeats genuinely come about because they make basic mistakes in their lives, which they attempt to fix later on. “She’s nothing to me Biff. I was lonely, terribly lonely.” (Miller 121). “I’m going to fix everything just the way it was before” (Fitzgerald 110). They are insecure and thought that since everyone is living the “American dream” that they could live it as easily as everyone else was. Wanting to be liked or loved by other people is a huge downfall because you change your values to what other people want them to be and lose yourself along the way. That is what happened to these two characters and by doing that, they never had any real friends.

The irrelevance of Gatsby and Willy’s lives is outlined through their absence of achievement and feeling of reality in the occasions and social orders they lived in. Gatsby had advocated his requirement for riches by accepting that it would take Daisy back to him. The fact that no one went to Gatsby’s funeral after he through all those parties shows how fae people are and how other people’s lives don’t mean a thing when you have money and can get away with anything.“Gatsby’s wonder when he first picked out the green light at the end of Daisy’s dock…his dream must have seemed so close that he could hardly fail to grasp it. He did not know that it was already behind him.” (Fitzgerald 180). “You can’t eat the orange and throw the peel away – a man is not a piece of fruit.” (Miller 64).

Originating from two unmistakable different backgrounds, both Gatsby and Willy fell prey to their very own wants to accomplish something that had just been lost to the past. Their mission of living in the past can never help an individual that must live for what’s to come. However, they have attached their love for the past, they would never be happy ever again, except if they would give up on their hopes to live in the past. American Dreams are not to be something that you had in the past and want to recreate in the future.

The Concept of the American Dream in Great Gatsby and Death of a Salesman. (2020, Nov 19). Retrieved from https://studymoose.com/the-concept-of-the-american-dream-in-great-gatsby-and-death-of-a-salesman-essay 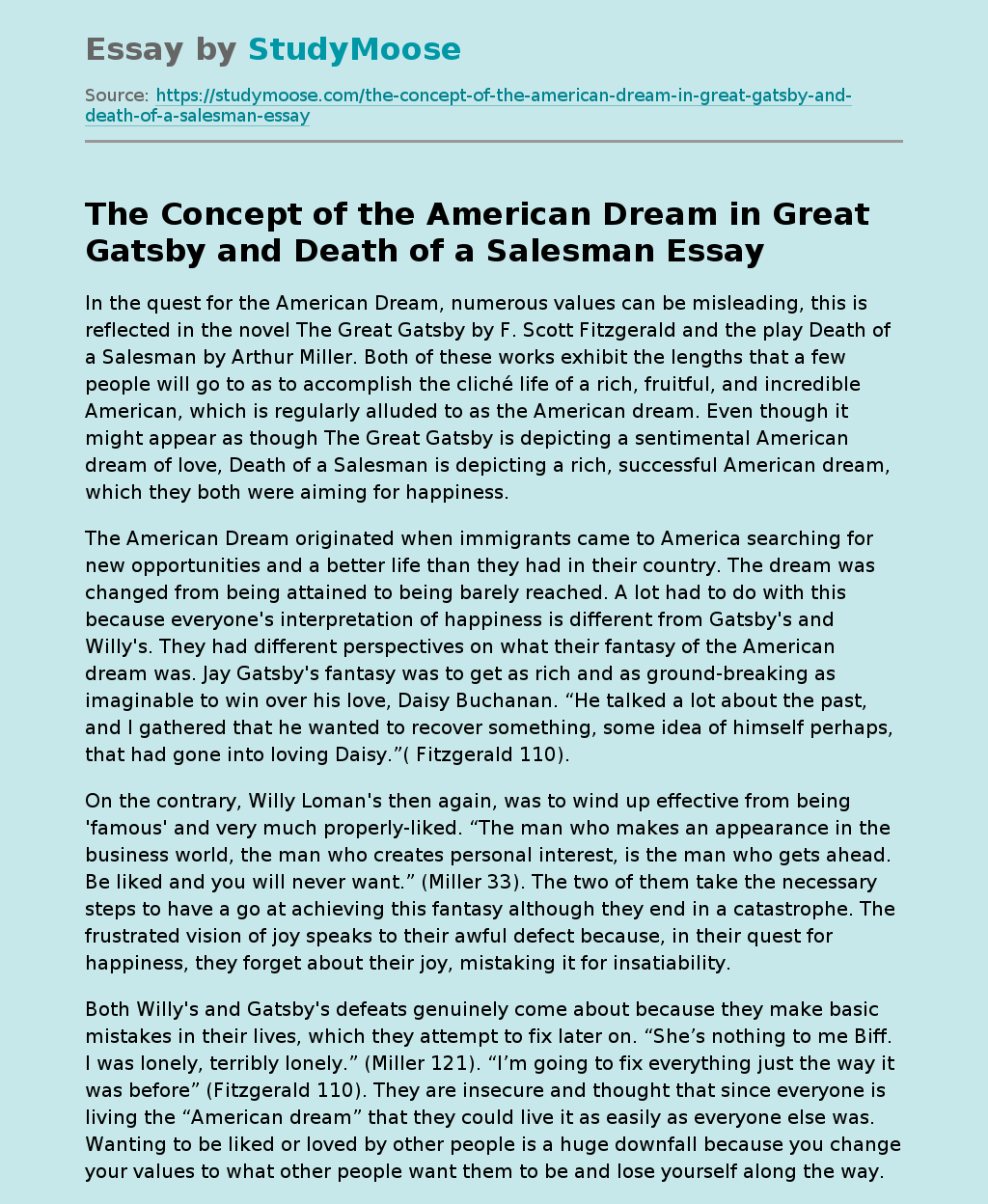