The American dream is an idea of success that many people wish to achieve in their lifetime. The stories “Death of a Salesman” and “ A Raisin in the Sun” all have similar themes but have different ways of obtaining the American dream. They both are from about the same time period but the families have different lifestyles and ideas of success. There are also a ton of difficulties in each story like losing jobs, losing lives, or just not being responsible.

Don't use plagiarized sources. Get your custom essay on
“ The American Dream In A Raisin In The Sun and Death of a Salesman ”
Get custom paper
NEW! smart matching with writer

The Romans from “Death of a Salesman” were a middle-class family. They had doors being closed on them while working for their dream while the Youngers from “ A Raisin in the Sun” were just getting a chance at their dream.

In both of the stories, the fathers can be the main characters because they are the center of attention throughout the story. Willy and Walter have an American dream and they want it to become a reality for their families.

Willy was a salesman wanting a life where his sons were as “successful” as he was and he wanted a life where he could buy new things and not have to repair old ones. While Willy was working for his company he told his sons that he was well-liked and that is “what makes a great salesman” and Willy’s idea of success is being well-liked and to have a lot of money. As for Walter, he wanted to invest in a liquor business with his friend to get his family into a new house instead of their cramped apartment.

Walter wanted the best for his family but his idea of success is to have a house of his own and to be wealthy. The two men wanted to be their own boss in some sort of way. Willy did not want to work for his neighbor’s business company because it would hurt his pride. Walter wanted to own his own liquor store and make tons of money to achieve his dreams.

Walter and Willy both have similar ideas of success but in the process of attempting to gain it, they were disloyal to their families. Willy betrayed his family by “cheating on his wife when he was supposed to be working earning money for his family”. Another way he did this is by killing himself at the end of the story. This was taking the “easy way out of his problems”. However, he also left his family to fend for themselves and struggle because his problems now became theirs. Walter was disloyal to his family. He persuaded his mother to lend him the rest of the ten thousand dollars after she put a down payment on a house. This was to help him open the liquor store that he wanted. Walter makes the mistake of giving all the money to his buddy Willy to invest in the store instead of giving three thousand of it to his sister for her college fund. Walter lost all of this money due to Willy running off with all six thousand dollars of it. This left Walter right back where he started with no money and no way of income to support his family.

The wives have another important part in comparing the stories. Linda and Lena are not the main characters but have very important supporting roles in the stories. Linda from Death of a Salesman could be called the peacekeeper throughout the story for her patience with Willy and Biff’s fighting. She did come off a little unknowing to everything that was happening with Willy’s job and with Biff and Happy, but she explained everything that was going on at the end of the story. Linda has compassion towards her kids but mostly focuses on her husband throughout the story. She was worried about Biff and Willy getting along and felt that Biff was making matters worse. Lena from A Raisin in the Sun is a woman that is dedicated to her kids but has trouble trusting them. She is worried about Walter’s money obsession and about Beneatha’s lack of religion.

The kids from the stories are Biff Loman and Happy Loman from “Death of a Salesman” and Walter and Beneatha from “A Raisin in the Sun” all have some sort of similarities between them. The characters all have their own idea of what they want in life but in different ways. Biff and Walter act the same because they do not listen to their family. This is seen through how Walter used all six thousand dollars on the liquor store but lost it all and how Biff did not want to follow his father’s footsteps. Although they do not have solid jobs, the characters felt that they were doing what they thought provided the best benefit for themselves and their families. Happy and Beneatha both are in the process of or have a solid career which puts them a step closer to their dreams.

Another note of comparison are the storylines themselves. The settings are around post world war two, which gives the reader a good understanding of what was going on around at that time. The setting from “Death of a Salesman” is mainly in New York in a middle-class townhouse home. As for the story, “A Raisin in the Sun” is set in a small run-down apartment in a black neighborhood in Chicago. The Lomans are a middle class average white family with stereotypical jobs like the working husband, stay at home wife and two kids. This setup of a white family was typical for this time period. The Youngers are a low middle-class black family. At that time they would not have had the same opportunities as what the Romans would have had. Nevertheless, they pushed through in achieving their dreams. They would not have had the same opportunities as the Lomans because of the racism that is going on around that time period. Specifically, they were not wanted in the community because of their race. Although the setbacks did not stop the Youngers from achieving their dreams, Willy Loman gave up on his dream because of all the problems that were occurring and he decided to kill himself get away from them. As a result of Willy killing himself, his family obtained twenty thousand dollars, which helped them to continue their dreams.

“Is there such a thing as a perfect family?” There is not a perfect family in either story because they both have their own flaws. In the story “Death of a Salesman”, the family is being torn apart because of Biff and Willy’s fighting about jobs and success. They are also not perfect because Willy does not fully love his wife. This is demonstrated when he cheated on her when he was supposed to be working and making money for the family. The whole family was falling apart because of the fighting between father and son. In the story “A Raisin in the Sun”, the family is closer together because of not only the small apartment but because they are a tight-knit family. Although they are in a rough state, they do their best with what they have. Walter tried to do what he thought was best for the family but in the end, it ended up putting them right where they started with no money. There is always the idea that there is this “perfect family” where nothing goes wrong and everyone gets along. However, in the long run, there is no possible way that there can be a perfect family because each one has its flaws. Every person’s idea of what a perfect family is going to be is different due to the different lifestyles that they live.

The American dream is what many people wish to achieve in their lifetime. The dream is referred to in many different ways but in this story, it is used as achieving a dream job and getting rich fast. Even though the stories are from around the same time period, they seem to have similar ideas of a perfect dream. Willy and Walter both wish to become rich and fulfill their dreams of a perfect life. The stories have different drama to them with the death of Willy and the loss of money from Walter. However, men still try to push through their struggles. Nevertheless, Willy gives up and Walter still has the hope to achieve the dream. The stories have many things to compare and contrast due to the similarities between them. They both wish to achieve the American dream and to be able to succeed in their lives regardless of the different struggles they go through.

The American Dream In A Raisin In The Sun and Death of a Salesman. (2020, Nov 19). Retrieved from https://studymoose.com/the-american-dream-in-a-raisin-in-the-sun-and-death-of-a-salesman-essay 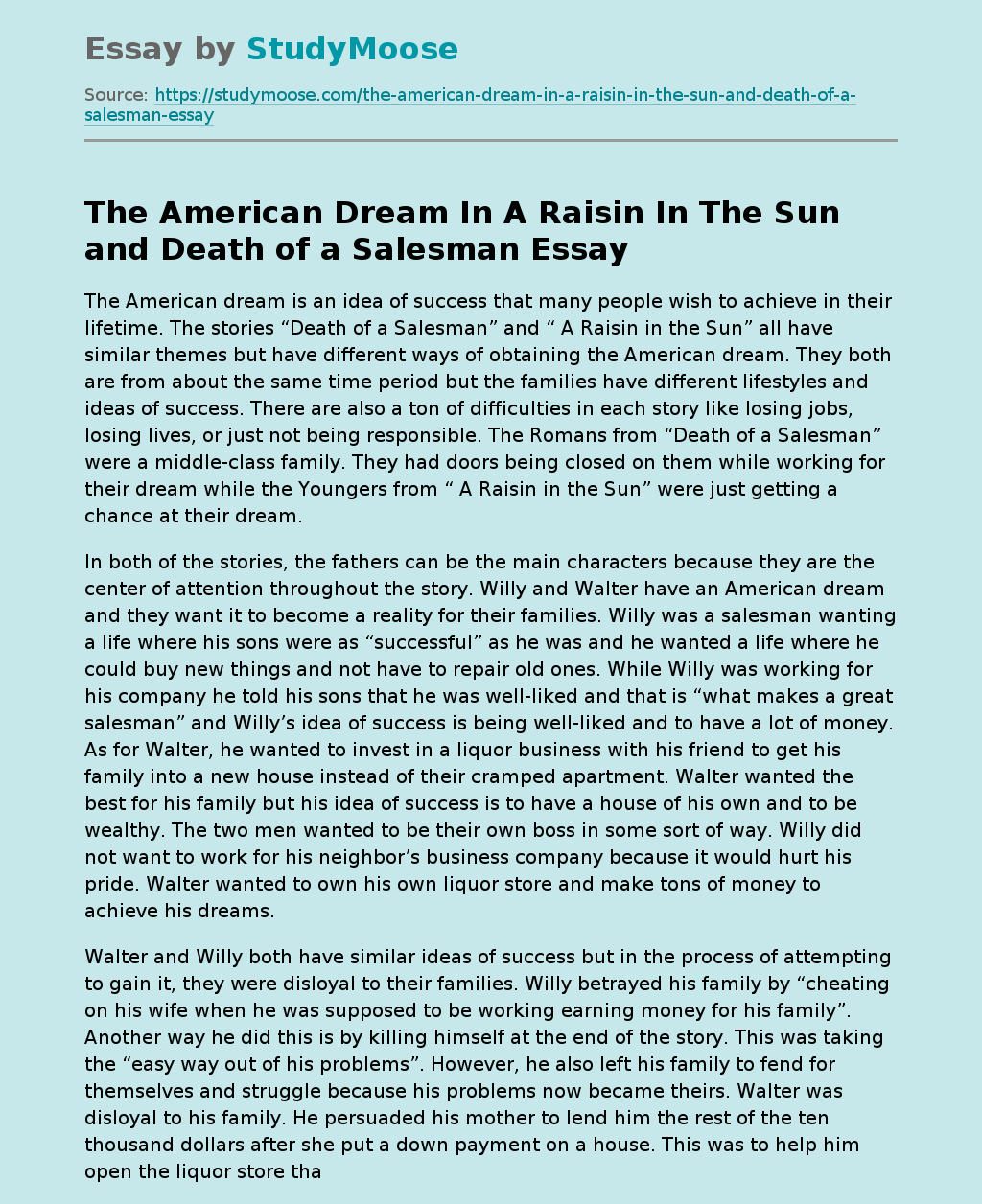