'Success' and the American Dream in Death of a Salesman?

What do you think Arthur Miller is trying to say about ‘success’ and the American Dream in Death of a Salesman? Is he using the story of Willy Loman to put across a message?

Death of a salesman was published in 1949, a few years after the end of World War two. It focuses on the achievement and belief in the American Dream. During the 1940s, society was concerned with materialism and status but the 1950s was when the American Dream was at its height.

Don't use plagiarized sources. Get your custom essay on
“ ‘Success’ and the American Dream in Death of a Salesman? ”
Get custom paper
NEW! smart matching with writer

America was founded by the pilgrims who were fleeing religious persecution. They wanted to create a nation where everyone was free and equal, and could be rewarded for their hard work. As America developed, these ideals continued and became known as the American dream. In other words, those who work hard will have great success and wealth. In America, anyone could achieve whatever they wanted, regardless of their class. However, in reality, the American Dream is not as straightforward as it sounds, as one could spend their life working hard and never amount to anything, but this depends on the choices made in life.

Success can be interpreted in different ways. In the case of this play, money, occupation and social status measures the success or failure of an individual. For example, people believe a well paying career and having material possessions represents the epitome of being successful. However, society considers a lack of money and material objects typical of an unsuccessful person – a failure. The definition of the American Dream is: ‘an American ideal of a happy and successful life to which all may aspire1: “In the deepening gloom of the Depression, the American Dream represented a reaffirmation of traditional American hopes”‘ (Anthony Brandt).

Success can be defined as “an event that accomplishes its intended purpose; the achievement of something desired, planned, or attempted; or the gaining of fame or prosperity”2. Willy Loman believes in the promise of the American Dream – that a “well liked” and “personally attractive” man in business will acquire the material comforts offered by American life. This shows Willy’s naï¿½vety and his superficial interpretation of likeability – he childishly calls Bernard an “anaemic”, disliked Bernard and considers Bernard to be a nerd because he is a hard worker. However, as a result of his hard work, Bernard has become a success, which is a contrast to Willy’s belief that looks will carry you through life.

Willy’s corrupt views of success is further emphasised when he says of his brother Ben “And that’s the wonder, the wonder of this country, that a man can end with diamonds here on the basis of being liked!”. Willy’s view here is corrupt, as the diamonds were found in Africa, not America, which shows that the American Dream is just a dream, as Ben became successful as a result of travelling to Africa. Also there is no proof that Ben was liked, nor that he ended up with diamonds as a result of him being liked. The repetition of the word ‘wonder’ emphasises Willy’s belief in the American Dream and that Ben was successful because of America, which shows Willy’s twisted views of success and the American Dream.

Willy’s corrupt views of success has rubbed off onto his sons, however, they are starting to understand that the American Dream is not what it is made out to be and is fictional:

“But then it’s what I always wanted. My own apartment, a car, and plenty of women. And still, goddammit, I’m lonely.” This illustrates that Happy has been fed Willy’s idea that material objects will make you happy and show that you are a success. However, Happy is not content. It is as though he is still missing something – perhaps a wife and children to complete the American Dream, which he believes in as a result of Willy installing this idea in his children from a young age. Happy can have all the women he wants, as he measures success on how many women he can sleep with, yet does not look for love from any of them. However, Happy suggests that he knows he needs a women as he constantly mentions that he is going to get married. Throughout the play, Biff does not know what to do in terms of his future.

He is confused due to ideas put into his head by Willy. Since high school, Willy has always suggested that success and rewards come from natural potential rather than hard work and instils the lack of success in Biff by convincing him that good things will come from something inherent rather than something that needs hard work. Willy says that “‘Bernard can get the best marks in school…but when he gets out into the business world…[Biff is] going to be five times ahead of him.” This shows the corrupt values Willy feeds his sons with. Constant repetition of saying that Biff can get anywhere in life without having to work hard leaves Biff believing that he can do anything and go anywhere and it will be easy, sets Biff up for failure.

It could be argued that Willy is not searching directly for success, but rather someone who is successful that he can follow that will lead him to success. Unfortunately, whenever Willy finds this person, they abandon Willy, leaving him, again, searching for the idealisation of success. Willy is abandoned by his father at a young age, and so looks to his brother for information about their father and his legacy. For Willy, it is important to know the legacy of his father in order to follow the same path in life. Without having his father as a role-model, Willy has to find another path to success. Willy remembers that Ben offered him a job, which he regrets not having taken.

With this job, Willy would have been following the old version of the American Dream. He would have been following Ben, the symbol of this dream who goes to exotic, far away places and returns rich. Linda reminds Willy of Dave Singleman, a successful salesman who Willy follows. Willy praises Dave Singleman highly and looks up to him, as that is who he wishes to be. Willy wonders “what could be more satisfying than to be able to go, at the age of eighty-four, into twenty or thirty different cities, and pick up a phone, and be remembered and loved and helped by so many different people?”. It could be argued that Willy’s reason for being a salesman is that he wants to be Dave Singleman – a well liked, personally attractive man who can sell things based not on product, but personal relationships.

To Willy, Dave Singleman is the American Dream. However, Dave Singleman was successful only in his career – “He died the death of a salesman, in his green velvet slippers in the smoker of the New York, New Haven and Hartford, going into Boston–when he died, hundreds of salesmen and buyers were at his funeral”. The connotations of Singleman’s surname imply that he was alone, he had no-one. Only other salesmen and buyers turned up to Dave Singleman’s funeral, illustrating that his road to success was lonely.

What Willy does not think of is that Dave Singleman had no-one else to provide for, he did not have the American family that the American Dream implies and he was not successful socially, as he had no friends to come to his funeral to say goodbye. There are parallels between Willy’s funeral and Dave Singleman’s – only Willy’s family turn up, none of the buyers he talked about, nor his business associates whereas it was only Dave Singleman’s business associates and buyers who came to pay their respects.

The play can be classed as a socialist drama. Willy lives in a capitalist society which offers success as the ultimate virtue, yet undermines its inhabitants, therefore preventing them from achieving success. These values that are imposed on Willy by society, combined by his own inadequacies lead to his death. These inadequacies interfere with reality and end up replacing it. This characteristic is passed onto Happy which in turn cripples him. Happy wants Willy to love him as much as he loves Biff and so does everything he can to get his father’s attention, including believing in the American Dream.

I think that Miller is trying to say that you should follow your own dreams and not live someone else’s. The concept of the American Dream is a good one, but in reality nothing is certain. A person, like Willy, can work so hard yet not reap the rewards they deserve, possibly due to choices they have made in life or because circumstances change. Willy believed that Biff’s popularity was the key to his success. Success does not necessarily mean that you have a high powered job, a big house and a lavish lifestyle. Success is what you make it.

'Success' and the American Dream in Death of a Salesman?. (2017, Oct 25). Retrieved from https://studymoose.com/success-and-the-american-dream-in-death-of-a-salesman-essay 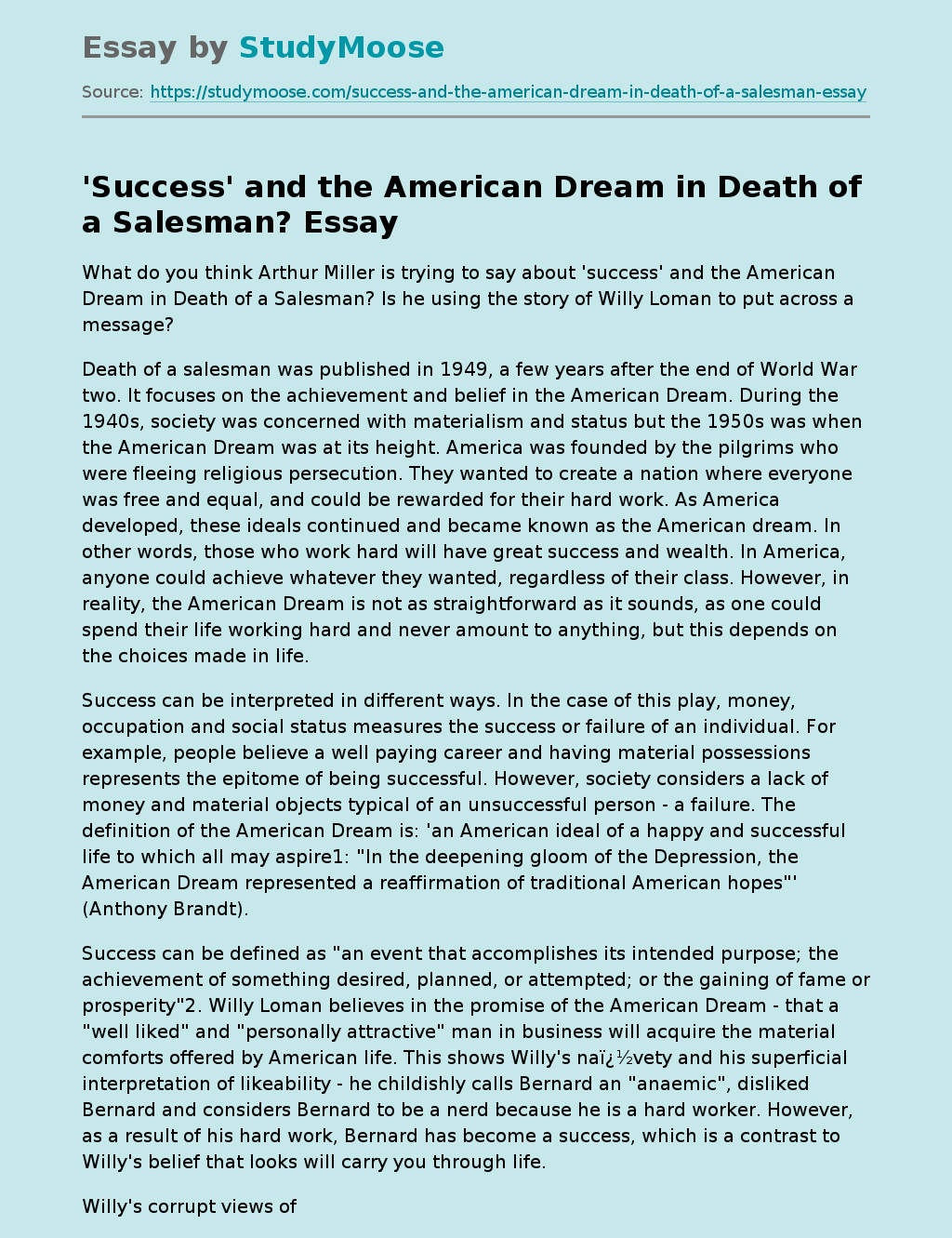