'The American Dream' - Death of a Salesman

Death of a Salesman is centred on Willy Loman who is a 63 years old salesman and has a wife named Linda and two sons, Biff and Happy.

Arthur Miller creates the Loman family so that everyone in a way could relate to someone in the family in one-way or another.

Many people in the late 1940’s and the 1950’s had lived through a very miserable depression, and it was during this time that the American Society and economy was changing as it was becoming more and more advanced technologically.

Don't use plagiarized sources. Get your custom essay on
“ ‘The American Dream’ – Death of a Salesman ”
Get custom paper
NEW! smart matching with writer

Times were changing and the ‘good old days’ such as the travelling salesman and were being withered away.

The American Society was changing in a way that people were becoming more and more competitive and people would try to get to the top by any means.

It became a desire for many Americans and was what they strived for their whole life.

The American Dream is based mainly on wealth and materialism.

The sense of freedom is what people are striving for. Freedom from bills and debt is what Willy Loman is striving for in Death of a Salesman.

The American Dream is seen as a perfect life, which consists of a house with a perfect family; a husband, wife, two children, all living happily and comfortably without any troubles.

But very few Americans achieve that goal in their lifetime, because there’s also competition if everyone’s aiming for it. Every person is competing with their friends and neighbours.

These flaws show through in ‘Death of a Salesman’ as Willy tries to get to grips with his life and trying to pay off his house.

‘Death of a Salesman’ has been used by Arthur Miller to show what the American Dream is really like.

The play is based around an average family man, Willy Loman, who has struggled all his life to make something of it; to ‘strike it lucky’. But his chance never came. He is presented as an average ‘middle American’, who wants to pay off all his debts and bills. This shows the lack of contentment in his life. He’s not content having a roof over his head, or having a job, because he wants more. Willy wants to achieve more, just like his brother, Ben, who struck it lucky, because he happened to get lost and stumble upon some diamond mines, but Willy blames himself for not going to explore the world with him.

Although he regrets not going with his brother, what he doesn’t realise is that he was too young to go with him; he was only 3 years old, when his brother left, whereas Ben was 17. But, despite this fact, he still admires him.

Willy has a very flawed way of trying to fulfil the American Dream. He does everything the wrong way and what he doesn’t realise is that it takes some hard work. This may be the reason as to why there’s a feeling of failure in the play. Both, Willy and his sons Biff and Happy are failures in achieving in what they wanted and this shows how Arthur Miller is presenting the flaws of the American Dream, because it can really take its toll on people’s lives and practically ruin their relationships with other people, such as their friends and neighbours.

Willy was constantly competing with his neighbour, Charley. However, Charley is running his own business, whereas Willy is still in the same job that he’s been in for years.

The character of Willy Loman is perfect for presenting the flaws of the American Dream, because he’s just an average man, and basically a nobody, because he hasn’t achieved the things that he wanted to achieve.

His belief that popularity provides the essential tools for success proves to be a tragic mistake.

Willy grew up believing that being “well-liked” is the secret to becoming a success. He thinks that popularity will help you charm teachers and even open doors in business.

In some ways this may be true however, one should also have real skills.

Miller shows multiple points in the story where Willy speaks of the importance of being well liked and of the importance of appearances. Willy says, “I thank the almighty God you’re both built like Adonises” to his sons. There are many other examples of this, when he is blinded by his narrow-minded views.

For instance: he taunts at the ‘nerdy’ Bernard, who is too focused on his academic success to be popular.

In a flashback Willy has a conversation with Biff: “Bernard is not well-liked, is he?… Bernard can get the best marks in school, y’understand, but when he gets out into the business world, you are going to be five times ahead of him”

But it all came crashing down soon afterwards, when he failed math. Biff never studied, or thought about the value of grades. He valued what his father instructed him to.

Willy believes that this teenage popularity will guarantee Biff’s success in his adult life. Even though Biff fails as an adult, his father still holds on to the idea that Bill Oliver, a businessman who Biff met numerous years ago will offer him a job.

He will not let himself believe that Biff stole from this man. On top of it all, after Biff confesses to stealing the pen from Oliver, Willy gives his regular old great advice. Again, his advice is to lie: “You give it to him and tell him it was an oversight! You were doing a crossword puzzle and accidentally used his pen!” Willy’s overall goals may be okay, however, his values are not. They are immoral, valuing only image, and popularity; never thinking about hard work, honesty, or skills of any sort.

Another misconception Willy has is that he believes Biff can be successful in business.

He thinks that this company will be successful because of Biff’s popularity and attractive personality alone. Willy never considers the possibility that the company may well be a failure because of Biff’s lack of experience or knowledge.

However Willy continues dreaming of making it big and he keeps on chasing this dream, because there’s a feeling of hope in him, every time his sons go for a job interview or have an appointment with their boss. He refuses to listen to what his sons have to say, because it’s not what he wants to hear. So, instead he just fills their mouth with words or keeps on interrupting them.

The lack of contentment is also shown through both sons. Happy’s name is pretty ironic, because his life doesn’t seem to be happy, even though he pretends to be. Both, Biff and Happy have a bitter streak in them as they both take revenge on their bosses in one way or another. Happy has a tendency to sleep with his boss’s girlfriends or wives, whereas Biff steals from his boss. But the reason they are like this is because their father has made them think they can do anything and get anywhere without qualifications.

However, Biff seems to go against his father, mainly due to the fact that he knows about his father’s affair.

But, Willy is still very stubborn and proud. He doesn’t realise his children are happy doing what they want. This is why his pride has got in the way of him not being able to achieve anything. He has also made his sons proud; too, by making them think that it’s their personalities that will get them a successful job. This represents another limitation of the American Dream; people have to work hard to get where they want. Bernard, Biff’s high school friend, is an example of this because he worked hard to get where he wanted and yet he never mentioned it to Willy, ‘The Supreme Court! And he didn’t even mention it!’ Willy says.

This shows that Bernard isn’t the type to boast about how well he’s doing even though he climbing the ladder towards the American Dream. He’s overtaken Biff and Willy regrets that, but isn’t quite sure who to blame. Himself or Biff?

Willy is blinded by false hope and great aspirations of striking it rich, but he’s doing all this for his children, so that they don’t have to struggle the way he did. But Bernard and Charley show that people have to do things themselves to achieve what they want to achieve, because Bernard is a top lawyer and he did this without anyone’s help. He doesn’t need Charley to provide for him, nor is he working for him either. The only things that Willy has ever been able to achieve in his life are solid material goods, such as his house, fridge, car and vacuum cleaner. But he doesn’t think that it’s enough, so he decides to go and crash the car and kill himself, just because he wants his children to lead a comfortable life. His death brings in money for his children, but it shows what lengths Willy went to just so that his children could lead the perfect life of this American Dream.

'The American Dream' - Death of a Salesman. (2020, Jun 01). Retrieved from http://studymoose.com/american-dream-death-salesman-new-essay 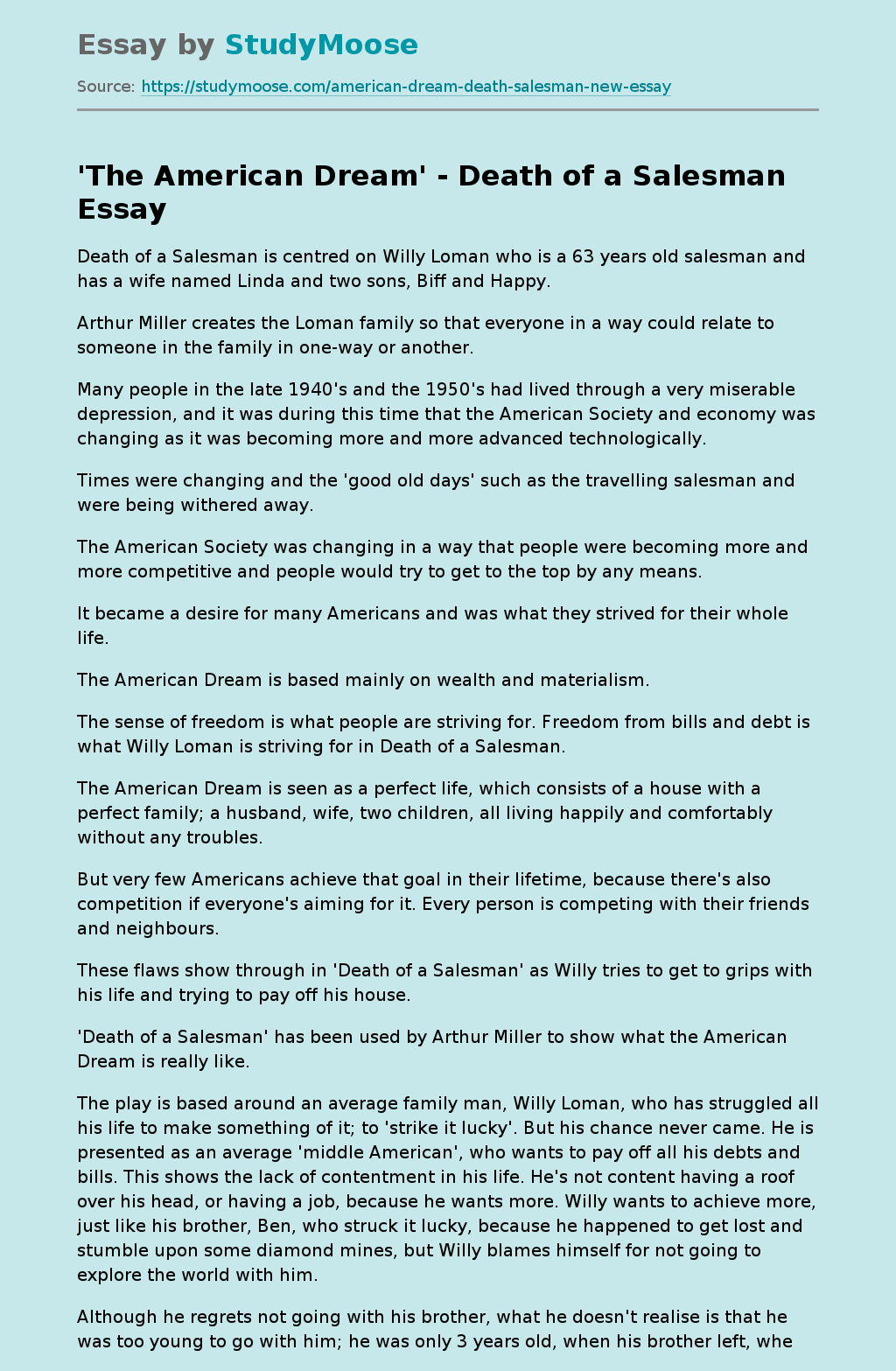