Happy Loman's Significance In Arthur Miller's "Death Of A Salesman"

The definition of the American Dream is an important theme that is woven throughout the attitudes and actions of Arthur Miller’s characters in his play The Death of A Salesman. Happy Loman, a character dominated by his material greed and desire to crush anyone standing between him and the almighty dollar, represents a skewed perspective of that Dream, a perspective shared by an increasingly large amount of Americans. Through his insatiable appetite for power, lust, and wealth, Happy Loman embodies the modern capitalist American Dream.

Don't use plagiarized sources. Get your custom essay on
“ Happy Loman’s Significance In Arthur Miller’s “Death Of A Salesman” ”
Get custom paper
NEW! smart matching with writer

And through his never-ending discontent and incessant feeling of unfulfillment, Happy also embodies the fallacy and shortcomings of that Dream.

One could consider Happy Loman to be a success. He may not be the president of his company (in fact he is one of two assistants to an assistant buyer), but at roughly thirty years of age, he has a steady job and a place of his own. And he’s moving up in the world, he’s getting somewhere.

And there’s nothing wrong with this. American society and capitalism in general is based on the Puritan individualist work ethic, which states that hard work breeds success and happiness.

But Happy isn’t succeeding because he works hard, because he’s well liked, or because he’s exceptionally good at what he does. He’s succeeding through the neo-American shortcut to happiness, the modern American Dream, which encourages cut-throat competition at every level. Happy, much like millions of other Americans, is moving up in the world by defeating his competition, by destroying all of those in his way.

On page 23 and 24, he says, “All I can do now is wait for the merchandise manager to die”¦He’s a good friend of mine.” Happy desires more money, more power, and more responsibility strongly enough that he is willing to lose a good friend of his, just to get his job.

His job. Not a job. Another reason why Happy symbolizes the new American Dream is his obsession with ruining the lives of others in order to better himself. “I don’t know what gets into me, maybe I just have an overdeveloped sense of competition or something”¦” he says on page 25. Happy can get any woman he wants. Yet he deliberately chooses to sleep with the wives and fiancÃ©es of his co-workers and bosses as a way of defeating them in some nonexistent competition for power. Therefore, despite the fact that they may be ahead of him in the business world, Happy can find solace in the fact that he “went and ruined” his bosses’ spouses. “Isn’t that a crummy characteristic?” he asks Biff. Of course it is, but it doesn’t stop Happy from doing it over and over.

Happy may represent the quintessential American in the aspects mentioned above, but what truly cements his position as the epitome of the neo-capitalist is his pervading feelings of unhappiness and discontent. When Happy speaks of possibly becoming the new merchandise manager, he says that he would do the same thing that the old merchandise manager did: build a mansion of a house for himself, then sell in in two months. He says on page 23, “It’s crazy”¦it’s what I always wanted. My own apartment, a car, and plenty of women.” Yet when Biff asks if he is content, Happy retorts, “Hell no!”. When speaking of women, whom Happy appears to be incredibly fond of, he says, “I keep knockin’ em over, and it doesn’t mean anything.” And why is Happy discontent? Because he defined the American Dream, his American Dream, in terms of money and power, instead of happiness and self-actualization. He will never be content, and neither will anyone else who shares his Dream.

When goals are determined in denominations of currency, then they can never be reached, because no one can possess all the money that exists in the world. What’s better than a Toyota? A Lexus. What’s better than a Lexus? A Ferrari. What’s better than a Ferrari? A hovercraft? A yacht? 2 yachts? A goddamn jumbo jet? It never ends. And thus, the American Dream can be crushed under the weight of a dollar bill when it is improperly defined. The Dream becomes farce, a crock, a hoax, an old wives’ tale, an urban legend, an orange that consists of nothing but the peel, a person whose soul, whose brains have been sucked out of his nose by little aliens wearing wing-tipped shoes, carrying attachÃ© cases, and driving hovercrafts with the future wives of their bosses in the passenger seat. But it doesn’t have to. 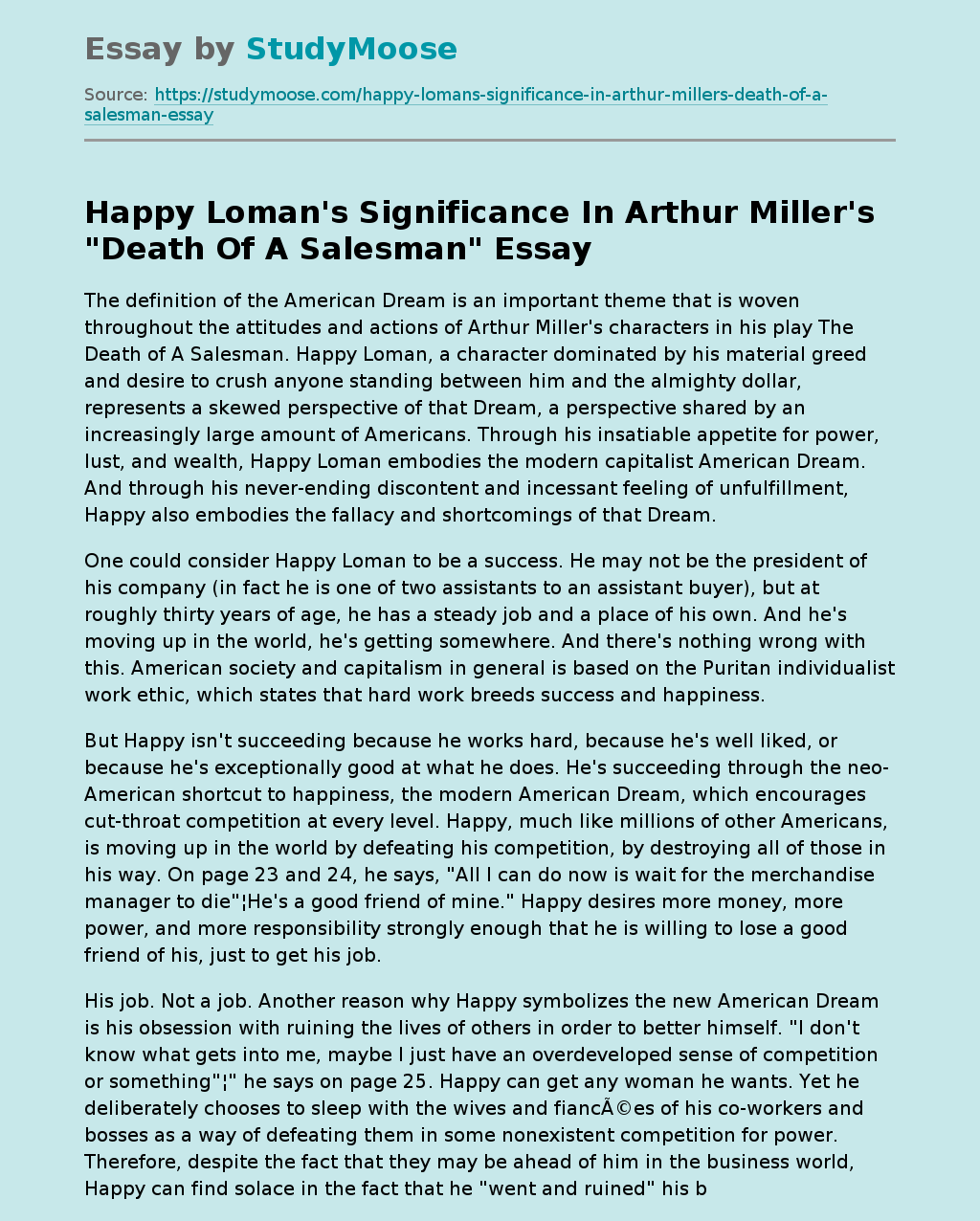