“A play that demonstrates the emptiness of the American dream”. How far do you agree with this assessment of ‘Death of a Salesman’?

It is evident from the first view of ‘death of a salesman’ that there are definite, negative realities in the American dream.

From writing this play, Miller has strongly illustrated that the American dream produces an image that human worth and values can be measured in financial terms. During 1940’s America, capitalism and consumerism was at it’s strongest with the American dream acting as a predator to the unsuspicious, determined and success-hungry businessmen of America.

Don't use plagiarized sources. Get your custom essay on
“ A play that demonstrates the emptiness of the American dream ‘Death of a Salesman’ ”
Get custom paper
NEW! smart matching with writer

Although some of these men prospered in creating a successful business and earned a lot of money, others failed and felt that their own small achievements were empty and insignificant.

In the play, Willy (like other American salesmen) has focused his life and attention on achieving the American dream and being a successful role model to his sons. Willy, however, does not accomplish success and instead falls victim to capitalism.

His main belief is that popularity leads to personal and business triumph, and materialistic items prove that he is well liked and loved by his friends and family. Even though Willy cannot afford expansive gifts, the American dream is based on materialising love and values and Willy does this when he buys Biff and Happy a punch bag branded with ‘Gene Tunney’s signature’.

Although at first this gift seems appreciated, rather than flatter and excite, materialism and brand names haunted Willy with debt and insecurity, yet he felt obliged to provide for his sons and determined to succeed in the American dream. Willy is a failure and his suicide attempts displayed an unproductive, exhausted man. He feels that what he does attain are empty achievements and his bad points and reasons for failure were obvious; such as instilling false values into his sons. It can be interpreted that, because Willy was ineffective, when he did achieve something, it was insignificant and empty; although some critics may feel that his lack of success may mean he put more pride in his minor accomplishments such as DIY around the house.

This is shown when Willy is trying to impress his neighbour Charley by saying ‘Did you see the ceiling I put in the living-room?’ Willy and Linda had only one payment left on their twenty five year mortgage before the house is their own, and Linda feels quite content and happy about this. But Willy is still unhappy, questioning the reason for owning the house in the first place: ‘What point?’. Owning the house is an empty accomplishment for Willy, even though it took so long to achieve. ‘Work a lifetime to pay off a house. You finally own it, and there’s nobody left to live in it’. this alone demonstrates the emptiness of consumerism and the American dream.

It is also illustrated that the American dream is an empty achievement when, at the beginning of the play, Happy and Biff are discussing their employment and future. At this point, Happy indicates that his manager’s success is empty, with him building a house that ‘he can’t enjoy once it’s finished’. Happy states that he is generally achieving everything that he wanted, yet they are not important to him; they are empty accomplishments. He even questions the reason why he is working just as Willy questioned the point of the house, because all he is achieving from working is pointless and empty success. It could be argued that Miller is trying to pursue the idea that it is the process of success that is more important than success itself. This strongly questions American values, as many people follow the American dream which holds the belief that material items are more important and that they represent personal and business victory.

However, Happy is successful personally to compensate for his empty achievements as a clerk. He seduces the fiancï¿½e’s of his managers because he has an ‘over-developed sense of competition’ – Happy takes what he wants even though he apparently ‘hates himself for it’, indicating the use of the bad morals taught to the boys by Willy. This again could be construed as an purposeless success in the process of achieving the American dream. Another point of perspective is that the women, like materialistic items and commercialism, may produce status in the American social system, but they also produce stress and not necessarily happiness.

Willy is in constant competition with his neighbour Charley, continuously aiming to be ‘bigger than Uncle Charley’ and promising his sons this success. This point suggests that materialism and the American dream are more important than general well-being and human worth, and some critics feel that through this neighbourly competition, Miller is questioning the values of America as a whole. Willy’s mind and psychology also breakdown because of his obsession with the American dream, and his dreams become illusions. Eventually, Willy is fighting with illusions and reality and believes all he is worth is his insurance money, stressing the idea that the American dream is empty and human values can be measured economically. The irony of Linda declaring ‘we’re free’ at the end of the play is both ironic and tragic as although she is now free of debt, the empty American dream the illuded both Willy and herself is still holding her and others ensnared.

On the other hand, in contrast to Willy, Charley is successful and has a fulfilling career and achieved the American dream. Willy is very envious of Charley, so much so that his pride, jealousy and stubbornness prevents him from accepting a job off Charley, even when he is unemployed: ‘I just can’t work for you, Charley’. Similarly, Howard, although cruel to Willy and fires him, is very successful. He has a happy, idealistic family life. He is able to afford materialistic goods, can provide for his family, is not overridden by debt and is generally fulfilled by his success and the American dream. Howard is very proud and boastful to have achieved the American dream and this is shown when he boasts his tape recorder to Willy, who is obviously resentful.

Howard’s other material possessions appear to be unimportant compared to the tape recorder and are no longer required, showing Howard to be a rather wasteful person. This again implies that, in difference to Willy, Howard is extremely successful and is relishing in consumerism, finding the American dream very rewarding. However, another point of view could be that Howard, like Willy, finds the American dream empty as he is not enjoying what he has achieved, and is just replacing everything with a more modern or expensive model.

In dissimilarity to Willy, Charley is a genuine, kind and caring neighbour, and is not at all in competition with Willy. Therefore, Charley values human worth and this suggests that American values are not concentrated mainly on accomplishment. Charley has not let the American dream influence his ideas of human worth and values, and he does not think that human life can be measured financially. He actually seems genuinely worried at Willy’s hints towards suicide and says to him ‘nobody’s worth nothing’ dead’.

Charley is realistic compared to Willy, who is idealistic and living in his own fantasy. Through his success, Charley sees Willy’s faults and reasons for his failure and tries to make Willy acknowledge this by constantly asking ‘Willy, when are you going to grow up?’. Charley recognises Willy’s fantasies are wrong and he tries to help him. This shows that the American dream has not diminished Charley’s character as it has Willy’s and Charley’s success mean she can help Willy financially. This can be interpreted as Charley using his satisfying achievements to help Willy.

For Charley, his dream has become a reality not an illusion. Charley may have also become victim to capitalism but, in comparison to Willy, he is thriving off it whereas it is destroying Willy. He is content with his success and feels fulfilled by his achievements, suggesting that the play does not entirely demonstrate the emptiness of the American dream but the fulfilments also. Miller himself argues that the play is not entirely based on the faults of the American dream although it does question American values very powerfully. He strengthens his argument because, although Willy is defeated by the American dream, Charley is entirely successful without creating personal flaws from his dreams of success. Bernard, his son, is also a genuine (as well as successful) person; a complete difference from Willy’s sons.

As a result, ‘Death of a salesman’ almost perfectly depicts aspects of the American dream today. Our twenty first century ideals, dreams and illusions echo, even more so perhaps, the prosperous America of fifty years ago. It can be related to by people of our culture today as well as those from the 1940’s, making the powerful reminders of the illusion focused on in ‘Death of a Salesman’ completely relevant to our world. It is from this that I have come to the conclusion that, although ‘Death of a Salesman’ subtly contains stories of success due to the American dream, this play is a textbook illustration of the emptiness of the American dream and consumerism; where failure and disappointment eats away at happiness and confidence, but success is, similarly, an empty accomplishment.

A play that demonstrates the emptiness of the American dream 'Death of a Salesman'. (2017, Oct 29). Retrieved from http://studymoose.com/a-play-that-demonstrates-the-emptiness-of-the-american-dream-death-of-a-salesman-essay 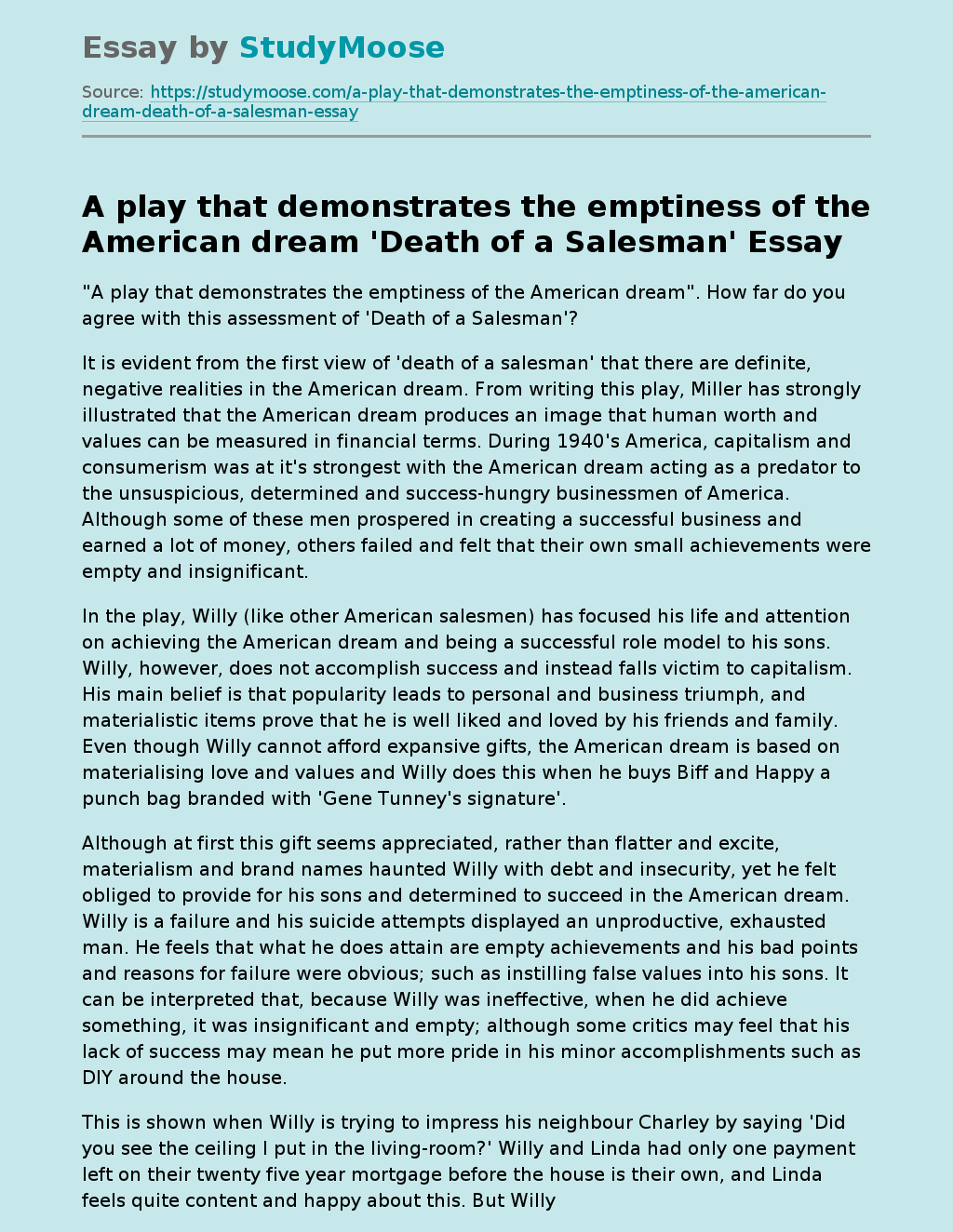