The article I chose is called “Empty Promises, Empty Cradles”. This case involves fake adoptions. A family is promised a child, and when the time comes, there is no child given to the family. Shockingly enough, there were no children to begin with. The women who promised their unborn children to the people, who were interested in adopting, were not even pregnant. At least six couples in the Midwest were victimized by this adoption fraud scheme.

For example, in a Florida case a woman contacted over a dozen victims through a forum/ Internet site for people who were looking to adopt a child, and posted that she knew a women who was about to “give birth”.

Turn in your highest-quality paper
Get a qualified writer to help you with
“ The Article “Empty Promises, Empty Cradles” ”
Get high-quality paper
NEW! AI matching with writers

All she asked of the adopting victims was either small administrative fees or for money to help with the birth mothers expenses. The victims obviously paid money for what they thought was going to go the birth mother, but in reality, there was no birth mother, and the money was pocketed.

In another case that took place in Indiana, Victoria Farahan contacted the director of a local adoption ministry and said she could provide newborns from a hospital in Moscow, Russia. She went as far as providing pictures of these babies, but it turns out that the pictures were of her own children. She eventually cheated six couples out of a total of $97,500.

The victims of this crime were all the women who thought they were going to receive a baby. Not only was it the women, but it was also their families. Some of these women took off work for maternity leave, while others moved into bigger homes in order to give, what they thought was going to be their child, a better and bigger home to live in. It really is a shame, because some of these women were not able to have children due to being infertile. To want a child your entire life, and not be able to have one is very depressing. Adopting a child was the only hope for the women in this situation. And they were let down yet again, but this time, their money was taken away from them.

This article that I found does not talk about the outcome of the case, meaning the charges are not stated. I do believe this is a severe crime. Some of the victims went as far as decorating a nursery and others even bought a new house. That money did not need to spent, so not only are they out of money from the fraud, but on top of that, they are down money for getting prepared for their child. I truly feel for all of the people who were victims of this case. Some people will do anything for money and not completely understand the consequences. I feel as though the money should be returned to every family that supplied the criminal with money, and the criminal should do jail time. 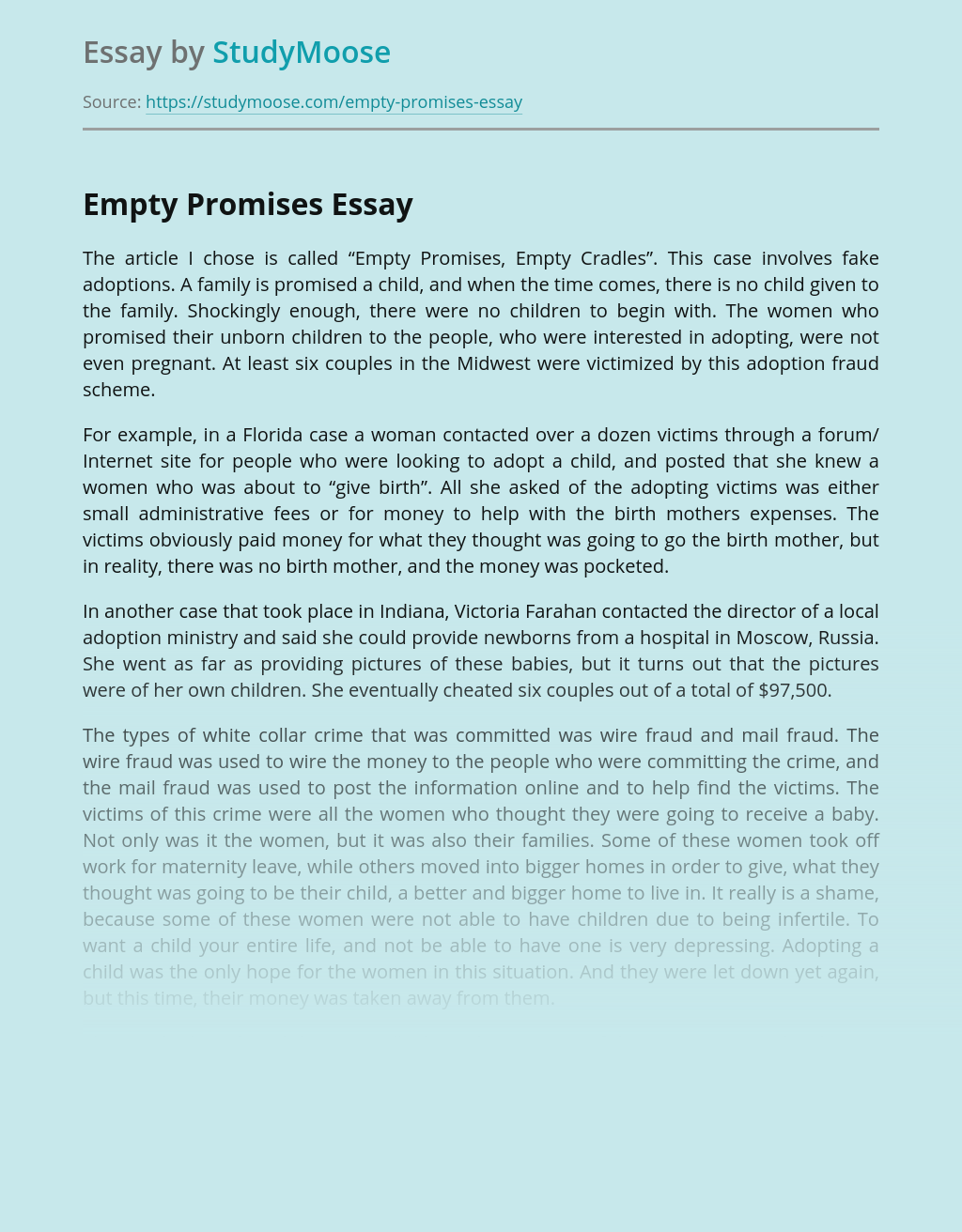 Turn in your highest-quality paper
Get a qualified writer to help you with
“ The Article “Empty Promises, Empty Cradles” ”
Get high-quality paper
Helping students since 2015
Stay Safe, Stay Original