Punitive Articles of the Ucmj Article 89

“Any person subject to this chapter who behaves with disrespect toward his superior commissioned officer shall be punished as a court-martial may direct.”

Don't use plagiarized sources. Get your custom essay on
“ Punitive Articles of the Ucmj Article 89 ”
Get custom paper
NEW! smart matching with writer

(2) Knowledge. If the accused did not know that the person against whom the acts or words were directed was the accused’s superior commissioned officer, the accused may not be convicted of a violation of this article. Knowledge may be proved by circumstantial evidence.

(3) Disrespect. Disrespectful behavior is that which detracts from the respect due the authority and person of a superior commissioned officer. It may consist of acts or language, however expressed, and it is immaterial whether they refer to the superior as an officer or as a private individual. Disrespect by words may be conveyed by abusive epithets or other contemptuous or denunciatory language. Truth is no defense. Disrespect by acts includes neglecting the customary salute, or showing a marked disdain, indifference, insolence, impertinence, undue familiarity, or other rudeness in the presence of the superior officer.

(4) Presence. It is not essential that the disrespectful behavior be in the presence of the superior, but ordinarily one should not be held accountable under this article for what was said or done in a purely private conversation.

(5) Special defense—unprotected victim. A superior commissioned officer whose conduct in relation to the accused under all the circumstances departs substantially from the required standards appropriate to that officer’s rank or position under similar circumstances loses the protection of this article. That accused may not be convicted of being disrespectful to the officer who has so lost the entitlement to respect protected by Article 89.

(a) Under such regulations as the President may prescribe, and under such additional regulations as may be prescribed by the Secretary concerned, limitations may be placed on the powers granted by this article with respect to the kind and amount of punishment authorized, the categories of commanding officers and warrant officers exercising command authorized to exercise those powers, the applicability of this article to an accused who demands trial by court-martial, and the kinds of courts-martial to which the case may be referred upon such a demand. However, except in the case of a member attached to or embarked in a vessel, punishment may not be imposed upon any member of the armed forces under this article if the member has, before the imposition of such punishment, demanded trial by court-martial in lieu of such punishment.

Under similar regulations, rules may be prescribed with respect to the suspension of punishments authorized by regulations of the Secretary concerned, a commanding officer exercising general court-martial jurisdiction or an officer of general or flag rank in command may delegate his powers under this article to a principal assistant. (b) Subject to subsection (a) any commanding officer may, in addition to or in lieu of admonition or reprimand, impose one or more of the following disciplinary punishments for minor offenses without the intervention of a court-martial— (1) Upon officers of his command—

Detention of pay shall be for a stated period of not more than one year but if the offender’s term of service expires earlier, the detention shall terminate upon that expiration. No two or more of the punishments of arrest in quarters, confinement or bread and water or diminished rations, correctional custody, extra duties, and restriction may be combined to run consecutively in the maximum amount impossible for each. Whenever any of those punishments are combined to run consecutively, there must be an apportionment. In addition, forfeiture of pay may not be combined with detention of pay without an apportionment. For the purpose of this subsection, “correctional custody” is the physical restraint of a person during duty or non-duty hours and may include extra duties, fatigue duties, or hard labor. If practicable, correctional custody will not be served in immediate association with persons awaiting trial or held in confinement pursuant to trial by court-martial. (c) An officer in charge may impose upon enlisted members assigned to the unit of which he is in charge such of the punishment authorized under subsection (b)(2)(A)-(G) as the Secretary concerned may specifically prescribe by regulation.

(e) A person punished under this article who considers his punishment unjust or disproportionate to the offense may, through proper channels, appeal to the next superior authority. The appeal shall be promptly forwarded and decided, but the person punished may in the meantime be required to undergo the punishment adjudged. The superior authority may exercise the same powers with respect to punishment imposed as may be exercised under subsection (d) by the officer who imposed the punishment. Before acting on appeal from a punishment of—

Department of Transportation for consideration and advice, and may so refer the case upon appeal from any punishment imposed under subsection (b). (f) The imposition and enforcement of disciplinary punishment under this article for any act or omission is not a bar to trial by court-martial for a serious crime or offense growing out of the same act or omission, and not properly punishable under this article; but the fact that a disciplinary punishment has been enforced may be shown by the accuse upon trial, and when so shown shall be considered in determining the measure of punishment to be adjudged in the event of a finding of guilty. (g) The Secretary concerned may, by regulation, prescribe the form of records to be kept under this article and may also prescribe that certain categories of those proceedings shall be in writing. CUSTOMS

4-1. The Army has its own customs, both official and social. Some have been handed down from the distant past while others are of comparatively recent origin. Those customs that endure stand on their own merits. As a long established social organization, the Army observes a number of customs that add to the interest, pleasure, and graciousness of Army life.

Often it is these customs and traditions, strange to the civilian eye but solemn to the soldier, that keep the man in the uniform going in the unexciting times of peace. In war they keep him fighting at the front. The fiery regimental spirit fondly polished over decades and centuries possesses him in the face of the enemy. [The soldier] fights for the regiment, his battalion, his company, his platoon, his section, his comrade.

4-2. A custom is an established practice. Customs include positive actions-things you do, and taboos-things you avoid. All established arts, trades, and professions, all races of people, all nations, and even different sections of the same nation have their own practices and customs by which they govern a part of their lives.

4-3. Many Army customs compliment procedures required by military courtesy, while others add to the graciousness of garrison life. The breach of some Army customs merely brands the offender as ignorant, careless, or ill bred. Violations of other Army customs, however, will bring official censure or disciplinary action. The customs of the Army are its common law. These are a few: * Never criticize the Army or a leader in public.

* Never go “over the heads” of superiors-don’t jump the chain of command. * Never offer excuses.
* Never “wear” a superior’s rank by saying something like, “the first sergeant wants this done now,” when in fact the first sergeant said no such thing. Speak with your own voice. * Never turn and walk away to avoid giving the hand salute. * Never run indoors or pretend you don’t hear (while driving, for example) to avoid standing reveille or retreat. * Never appear in uniform while under the influence of alcohol. * If you don’t know the answer to a superior’s question, you will never go wrong with the response, “I don’t know sir, but I’ll find out.”

4-4. Courtesy among members of the Armed Forces is vital to maintain discipline. Military courtesy means good manners and politeness in dealing with other people. Courteous behavior provides a basis for developing good human relations. The distinction between civilian and military courtesy is that military courtesy was developed in a military atmosphere and has become an integral part of serving in uniform.

4-5. most forms of military courtesy have some counterpart in civilian life. For example, we train soldiers to say sir or ma’am when talking to a higher ranking officer. Young men and women are sometimes taught to say sir to their fathers or ma’am to their mothers and likewise to other elders. It is often considered good manners for a younger person to say sir or ma’am when speaking to an older person. The use of the word sir is also common in the business world, such as in the salutation of a letter or in any well-ordered institution.

Punitive Articles of the Ucmj Article 89. (2016, Jun 07). Retrieved from http://studymoose.com/punitive-articles-of-the-ucmj-article-89-essay 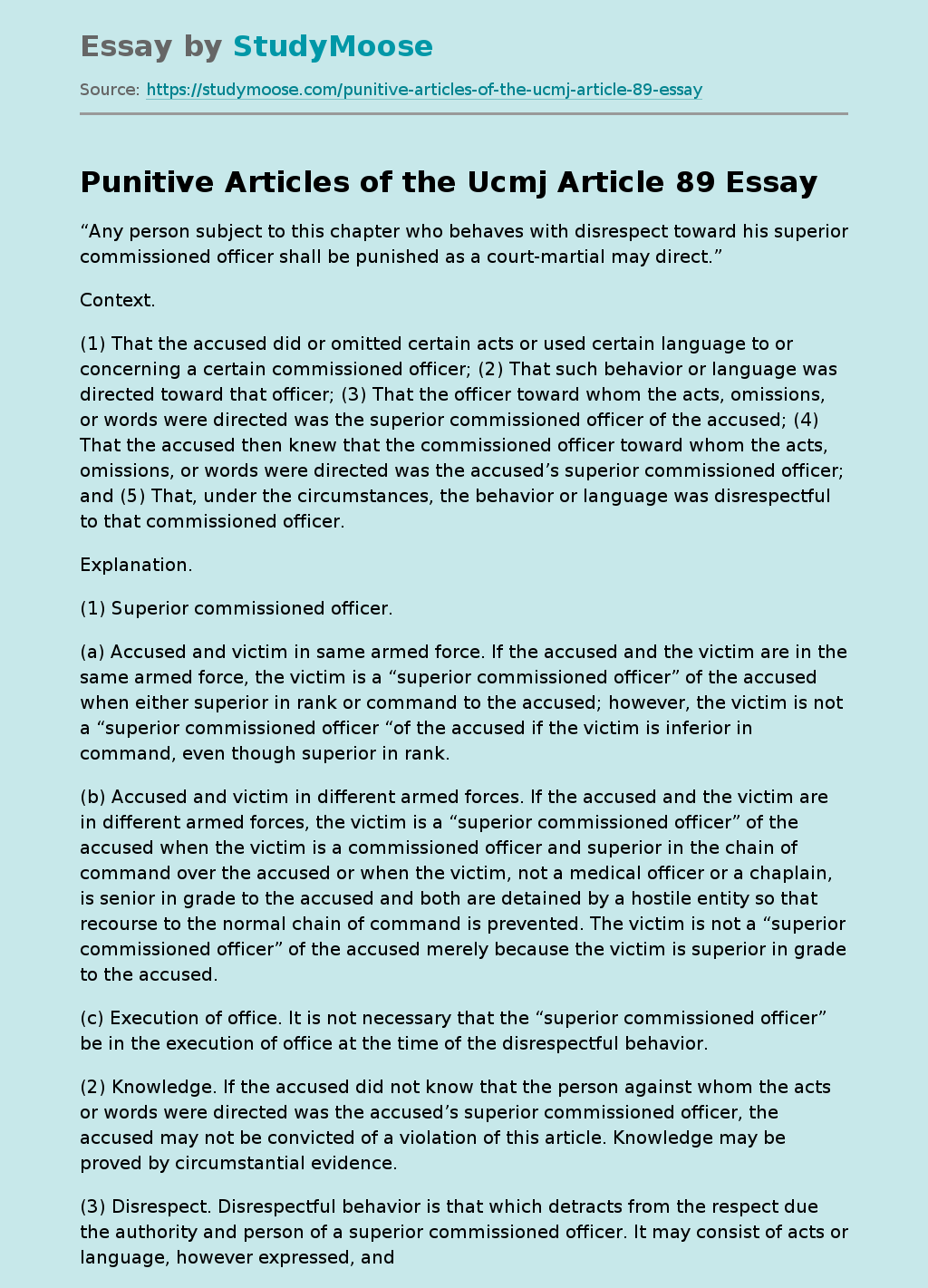