"The Standard of Living" by Dorothy Parker

What is Dorothy Parker suggesting to readers regarding the values, dreams, and aspirations in today’s materialistic society? The story “Standard of Living” makes some strong statements about the values of todays society. Annabel and Midge are obsessed with money. The girls spend countless hours fantasizing about being millionaires and trying to emulate those that are. Their love of money is not only fueled by the materialistic products they can buy with it, but by the envy they get from others that thing Annabel and Midge have money, and the power that comes with that envy.

Don't use plagiarized sources. Get your custom essay on
“ “The Standard of Living” by Dorothy Parker ”
Get custom paper
NEW! smart matching with writer

The setting of Fifth Avenue in New York, NY, is a key element in the story. Fifth Avenue is not just lined with high priced stores, it’s world famous for shopping; A perfect setting for two chauvinistic characters such as Midge and Annabel. Not only is Fifth Avenue one of the most expensive places to shop, but it has glamor and fame attached to it.

Its not just the best, it is the best of the best, which is of course what rich people expect. Despite having poverty ridden life, the girls put an astounding amount of emphasis on trying to look rich. They eat the food that a wealthy person would eat, but the cheap knock of version. With todays society valuing money above almost everything else, people who have it (or like to pretend they have it) will sometimes develop an inflated sense of entitlement.

The girls feel entitled to treat others as inferior people, whether they be walking with their noses in the air, or going through men faster than socks.

The $250 000 emerald and pearl necklace is another key element. The necklace was glamorous. It was something that would definitely lead people to believe that they were better than them. When they entered the store to investigate, they were proud, arrogant, and discerning, just like ‘rich’ people are of course. When they found out the price of the necklace, they not only just about ‘lost their cool’ but even their imaginary selves would have felt inferior in that store. Their sense of pride was battered as they walked down the road, but they quickly regained it when the million dollar game turned into the ten million dollar game. They seemed just horrified at the fact that someone could actually have more money than they imagined themselves having. Having someone being better than even imaginary them would just never do.

Annabel and Midge spent so much time in their fantasy world, that they didn’t know what to do with themselves even in a instant of being zapped back to reality. Society’s high value of money had distorted their ability to distinguish the difference between standard of living and quality of life. You would think that since both girls were from low to lower middle class families, they would better understand that money is not everything. However, no matter how much an individual does or does not value money, money equals power, and always will. People have subconscious drive to be more powerful than those around them and money allows them to do that.

Money allows people have whatever they want, whether it be a material item, or even a person. The tobacco industry is a great example. Tobacco products kill hundreds of thousands of people every year. Not only is it a repeat business to begin with, but the product itself is heavily addictive, so people give the company repeat business whether or not they really want to. The industry however maybe cares about the people they are killing on a personal level, but the money they make off of it is enough to counteract that guilt. I guess you could almost say they are selling their souls.

Our society revolves around money. Almost everyone will agree that the more money they have for their own personal use, the better. But unfortunately, because money is so highly valued, that not only is more money better, but more money makes the individual person better. The love of money is repeatedly responsible for a lot of negative things that have fallen on society, but without it, people would not have the resources to provide for themselves.

The love of money changes people, and usually in a negative manner. Money can make people happy by means of immediate gratification. It is not only affluent people that define themselves by their materialistic wealth, but simply those with an ostentatious sense of entitlement. Our society needs money for everyone to live comfortably, but sometimes we may be better off without it.

Parker, Dorothy, “The Standard of Living”

"The Standard of Living" by Dorothy Parker. (2016, Jul 20). Retrieved from http://studymoose.com/the-standard-of-living-by-dorothy-parker-essay 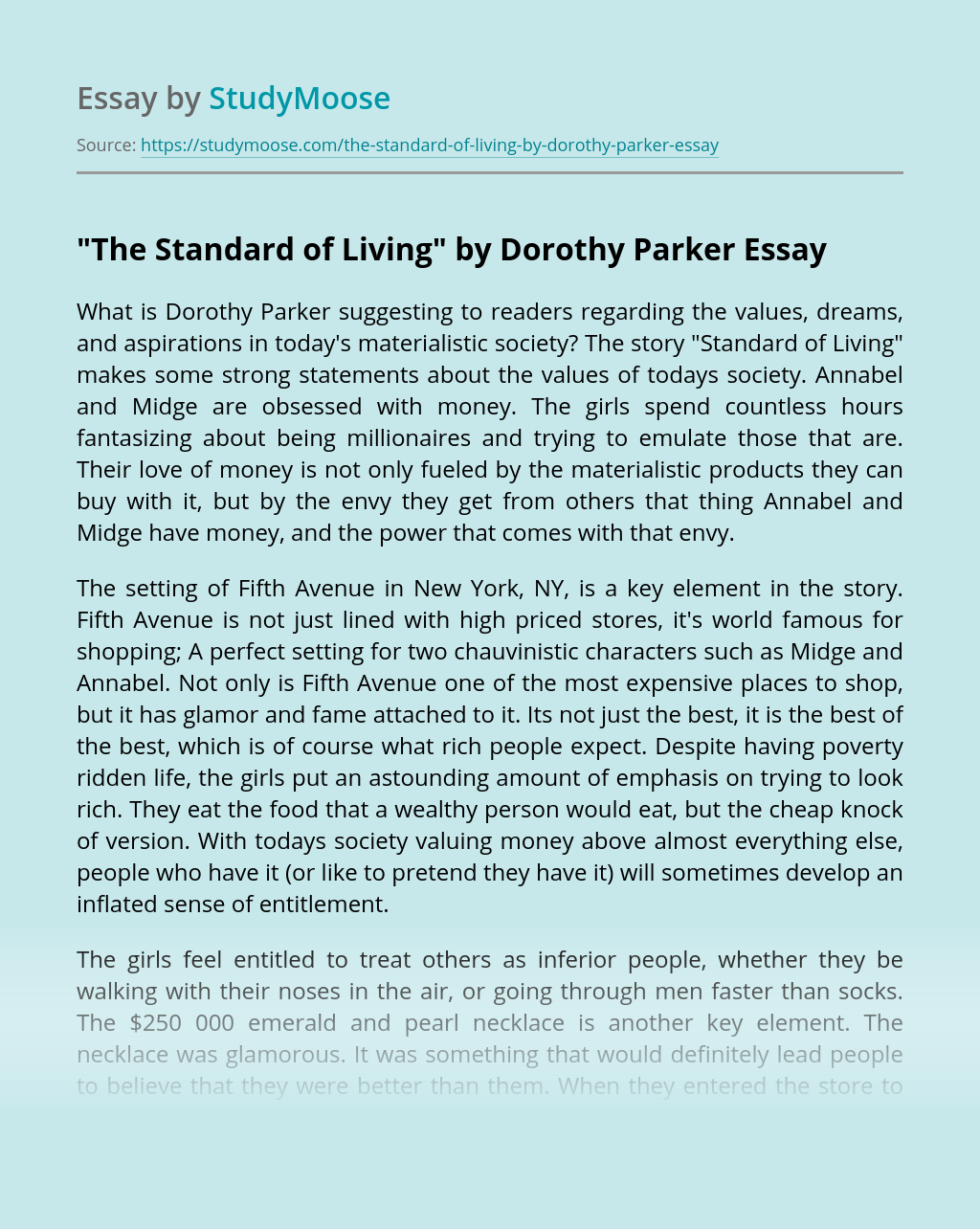