A Summer With My Aunt

I, of course, was not used to spending any amount of money because my parents were doing well enough to keep my sister and me in school, so the idea of having leisurely money was a new concept which I craved. As a child I admired this woman for many reasons and wanted to be like her. I wanted to live in a nice neighborhood with a big house, I wanted to drive a beautiful white shiny car and wear new clothes, I wanted to be strong and healthy , but most of all I wanted to be successful like she was.

Don't use plagiarized sources. Get your custom essay on
“ A Summer With My Aunt ”
Get custom paper
NEW! smart matching with writer

So I spent my days in school preparing for college so that someday I would be able to be like her.

Things changed, though, when I moved down to Texas for two months to take care of her nine month old son, Luke; as it turns out Gretchen Decker was and is not as happy with her life as I thought she was.

At the beginning of the summer I had agreed to fly out to California to take my grandma’s place as a helping hand for my aunt. Gretchen had just married her third husband, Chris, two years prior and had recently become pregnant. My whole family was rather concerned with this matter because my aunt was now in her forties; when complications started arising my grandmother put her own life on hold to focus her attention on her daughter.

When the time came, though, it was my turn to help my aunt.

I left my job, friends, summer activities, and leisurely time to fly out to California and take care of my cousin. Plans were interrupted by my aunt’s job, though, when she received recent news of a promotion that would land her in the Dallas metropolis. I, of course, did not mind because either way I would be able to finally get to know this woman I so aspired to be like, and at the same time I would be able to visit with my aunt Trudy. So at the end of the summer I packed up my bags and my dad, sister, and I drove down to Texas.

The house was gorgeous with a huge entry way and vaulted ceilings and a large open-concept kitchen and living room. The rooms were not very large but they were a decent size, close to a large bathroom. There was no furniture yet because it was still being moved from California and sadly we’d have to live without it for a couple more weeks. It was a great neighborhood, though, quiet and clean but most importantly, safe; this was the house my mother and father were working so hard for. The city was also very established with great schools and big malls, another thing I, myself, had always wanted.

The next day I met Luke and was shocked by his appearance. He was a gorgeous baby but his weight brought up a bit of a concern for me. Luke was only nine months old and weighed 30 pounds; the first though in my mind was, “why is she feeding him so much? ” but I held my tongue and asked, “So, what does he eat? ” My aunt replied saying, “well he has five bottles a day and two to three solid meals a day. ” Another thought, “holy crap,” then I said, “Wow, he’s big. ” She laughed and said, “Yeah he’s definitely not starving. She may have found it funny but I found it odd that this child was the size of a two year old and was barely able to move. I walked over to the refrigerator next and poured myself a glass of water. As I drank, I stared at a picture of my aunt and Chris. They were running side by side concentrating on the goal ahead, when suddenly Luke laughed and my attention was turned to the other side of the room. My sister, Darian, was playing with Luke and showing him how to use his toys. My aunt smiled at the sight and said, ” Darian, I love this little guy so much.

It’s amazing. I’ve never loved anyone or anything this much. ” My sister immediately asked, “Don’t you love Chris? ” The pause in-between the question surprised me, but finally she answered, “well… yes but I just love Luke so much. ” She continued to answer the question by saying that Chris was a good companion and that’s why she married him. Later I would learn my aunt “ just liked to be married” and that is what led me to believe my aunt didn’t care about love as much as she did her job, because she went into a marriage thinking like a business woman rather that a girl in love.

To me this also meant she just didn’t want to be alone. A week went by and the moving was done and I was left alone with my aunt. She was struggling to get used to things at her new job and ii could tell she was under much stress. So I did everything I could think of to take a load off her back like doing the laundry, cooking, cleaning and making sure Luke was in a good mood for her when she came home. No matter what I did though my aunt began to become increasingly frustrated with her job. She would leave the house around six-thirty every day and come back around six and continue to do work after Luke went to bed.

She would always tell me she wished she could spent more time with Luke but that wouldn’t be able to happen because Chris was playing “ peter pan” in Afghanistan. Every day it was the same thing: “Chris is peter pan,” “I wish I didn’t have to be the main provider” but the fact of the matter is that my aunt makes around 104 thousand dollars a year and Chris makes around 84 thousand. I was becoming very frustrated with my aunt’s complaints because my family of four had loved off 30 thousand for quite some time and managed to survive, so why couldn’t she live off 84?

The answer to my question was very upsetting. She said, “Well that’s Missouri and Missouri isn’t the real world. ” How dare she belittle my parents’ hard work! They both worked day and night trying to provide a better life for my sister and I and this is how she sees their work? I didn’t even get to see my parents a lot of the time because one of them was always at work, and here my aunt sat in a huge house with a nice neighborhood, with a beautiful baby and a handsome husband and money so much that she didn’t even know what to do with it, trying to tell me how terrible her life was.

I kept my mouth closed because it was not my place to tell her these thoughts but more and more I became disappointed in my aunt. Why could she not be thankful and content with what she had? Her favorite subject of complaint was her husband; mostly, because he didn’t make enough money for her to stay at home but she also accused him of trying to avoid her and Luke because he didn’t wasn’t to take any responsibility. She thought this because he was going to stay in a deployable unit but at the same time the reason he was doing that was for an education opportunity.

There was no pleasing her, though; even the fact that Chris wanted to be the provider did not appease her. She had made a comment to me about how she would “Find Luke a new daddy” if she had to. This made me sick to my stomach that she would say such a thing but I guess that is what happens when you marry someone just because you “ like to be married. ” Marriage is not like playing house it is a gift God has given us to become one with another person you love. Everything I admired my aunt for pretty much washed away because of my experience this summer and I will not go back to live with her again.

She will sit in her big house in a nice neighborhood, with a husband she dislikes, a job that makes good money, and rot because she does not know how to be content. That’s what I really want is to marry a man I love, give him beautiful children, and work at a job that I absolutely love; not a bunch of money with nothing to do with it. I can thank my aunt, though, for showing me how unhappy a person can be in their life because they focus their mind on only the negative and never any positive aspects of their lives. 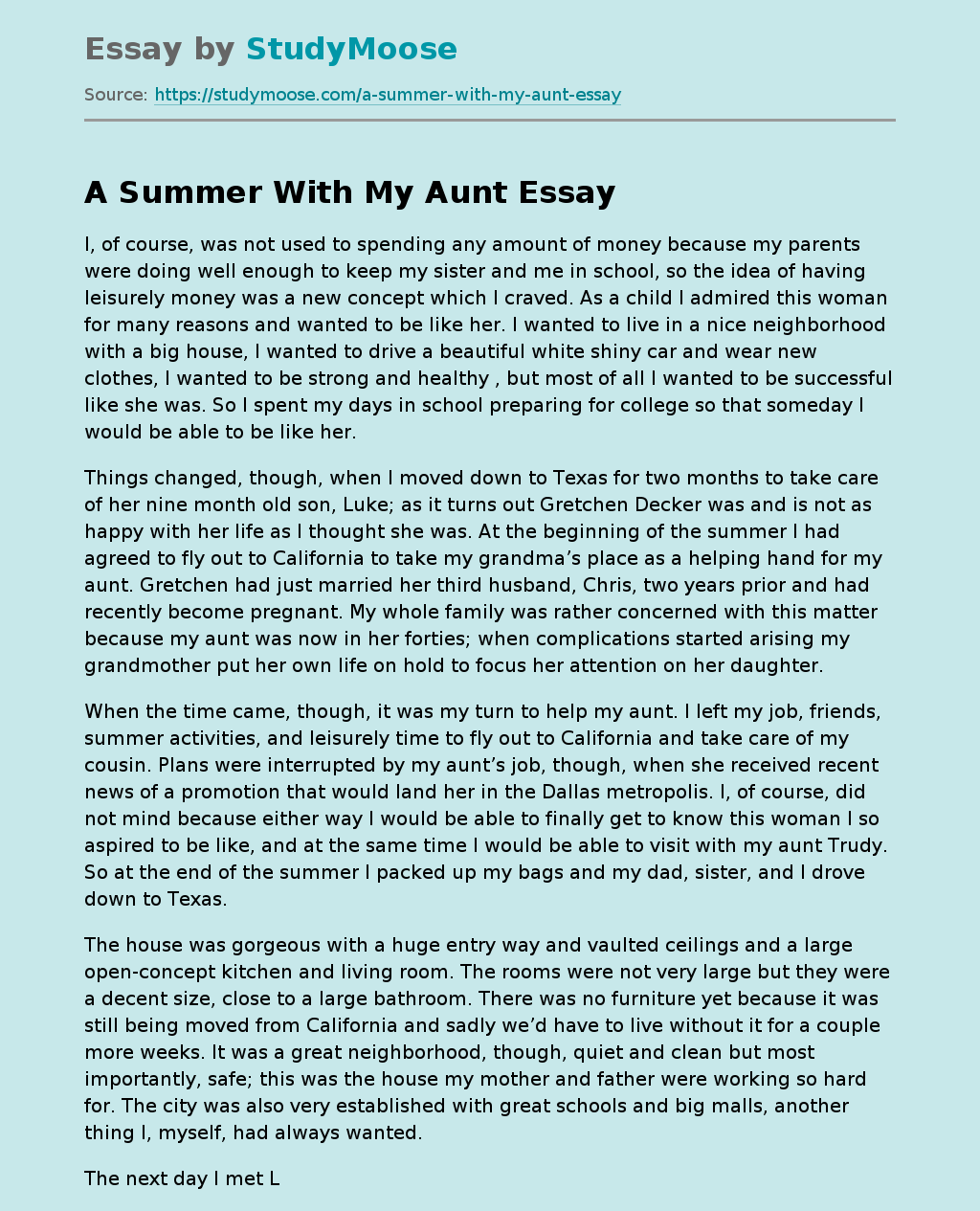