Should Handguns Be Banned?

This essay is an argument whether or not handguns should be banned. It is a pretty neat, a good persuasive essay.

The Need to Live – The Need to Ban Guns Last year, about 50,000 Americans died from gun-inflicted injuries. Guns are, non-arguably, designed to kill. Carrying of guns has been a major topic of discussion and argument over the past several years and it has gotten no where close to a solution. Guns should be banned.

The fact that the second amendment in the United State’s Constitution states that an individual has the right to bear arms, has been over-stretched and erroneously considered to comprise the right to bear guns.

Plus, the second amendment, which was written in 1791, was implemented at a different time. But, now the times have changed. Now we have a powerful police force that keeps things under control.

Ever since the first gun was invented by Samuel Colt in 1836, it has been used for destructive purposes rather than for self-defense.

Since then, senseless killings have ever been growing throughout the world. Not that other weapons are not used for the crimes, but the rate of murders using guns has increased over the past years. Last year, about 50,000 Americans died from gun-inflicted injuries. About 90% of them were committing a crime at the time.

Perhaps one of the most obvious reasons why guns should be banned is the growing rate of murders and crimes in our American society. Most of the times, these crimes are not planned and guns are used over trifle matters in routine life.

These matters, otherwise, could have been resolved amicably or by an intervention of a mediator. But, an easy access to guns could also provoke them and provide them with another reason to commit the misdeed that they were just pondering upon. These incidents are on a rise and are commonly witnessed.

Guns are capable of ending a precious life in a few minutes, thereby interrupting the natural life cycle. On the one hand, every effort is made by scientists and doctors to save and improve life expectancy. Researchers throughout the world are working to find cures for deadly diseases such as AIDS and cancer so that a human can live longer. On the other hand, guns are created to destroy the same lives that the doctors and scientists worked so hard to save. This is another reason why we just have to ban guns.

Guns should be banned. The presence of guns makes our society insecure. Guns are used every year to commit crimes and murders, all this could stop if we take action now and eradicate the selling and purchasing of guns in public. The best way to do this is by banning guns.

Should Handguns Be Banned?. (2016, Jun 28). Retrieved from http://studymoose.com/should-handguns-be-banned-essay 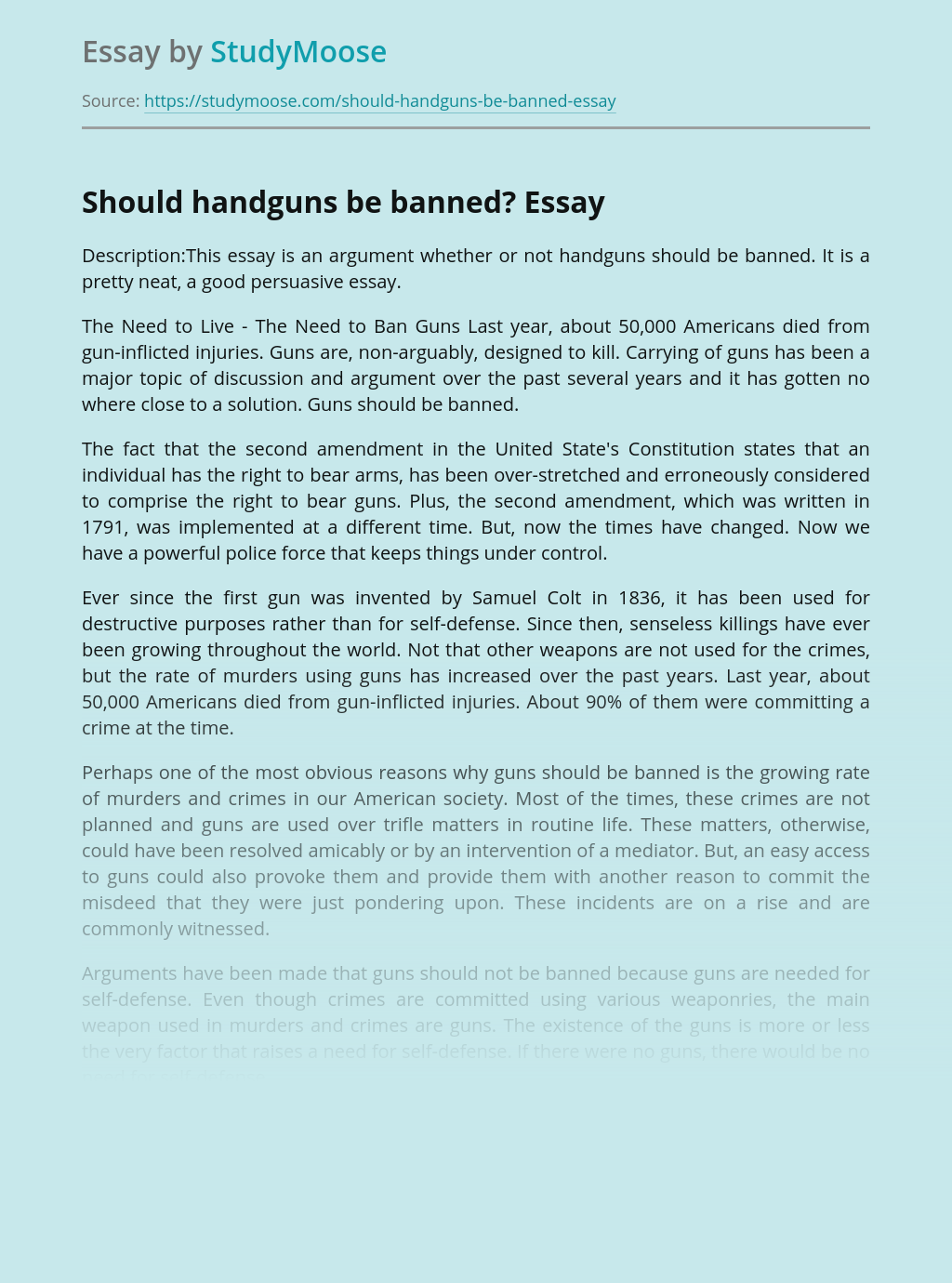 Don’t waste time
Get a verified expert to help you with Should Handguns Be Banned?
Hire verified expert
$35.80 for a 2-page paper
Stay Safe, Stay Original