The Punished and the Pardoned – Romeo & Juliet Essay

The woeful tale of Juliet and her Romeo ended with numerous casualties, casualties that could have been avoided if not for mistakes made by characters in the play. In light of Romeo and Juliet’s suicide, Prince Escalus declares, “some shall be pardoned, and some punished” for their mistakes. (V. iii. 319) Among the punished should stand those who played the largest role in the suicides, and among the pardoned should stand those who deserve absolution. Throughout the tale of the two star-crossed lovers, Romeo and Juliet rely on their closest confidant to keep their almost sacrilegious relationship a secret.

Don't use plagiarized sources.
Get Your Custom Essay on The Punished and the Pardoned – Romeo & Juliet Just from $13,9/Page

Their closest confidant, the supposedly righteous Friar Lawrence deserves a major punishment, such as death. From the start, Romeo went to the friar for guidance. In Act II, Scene iii, Romeo sees the friar for the first time in the play. In this scene, Romeo entrusts his secret love of “the fair daughter of rich Capulet” (line 62) and convinces a contradictious Friar Lawrence to marry them.

Similarly, Juliet confides in the friar as well. After finding out about her arranged marriage to County Paris, Juliet seeks help from the friar’s “wisdom” (IV. i. 3) to come up with a plan that will stop the marriage and allow her and her Romeo to live “happily ever after. ” Unfortunately, this immense trust failed the lovers when Friar Lawrence created the elaborate plan that would lead to their demise. Moreover, the friar created the plan specifically to cover his tracks, because of his cowardice and fear of the families. finding out about secretly him marrying Romeo and Juliet. Not only did the friar responsible for indirectly killing Romeo and Juliet, but he also married them without informing the Capulets or the Montagues.

He deserves a punishment as vile as execution for his actions. Also among the punished is the Nurse. The Nurse has played a big role in raising Juliet. At the time, the Nurse did what mother’s couldn’t. The Nurse’s job consists of caring for Juliet, and doing what’s right for her. In fact, the Nurse even reveals that she cares about Juliet so much that if she “might live to see thee married once,” she will have her “wish. ” (I. iii. 66-67) However, if the Nurse truly cared about Juliet she would have told Juliet’s parents about her and Romeo.

If the Nurse did the right thing for Juliet, she could have stopped any of the suicides or deaths from happening. If this were the case, the worse event to occur would have been Juliet’s parents forbidding her from seeing Romeo. If this happened, eventually Romeo and Juliet would have simply moved on, and all these deaths would have been avoided. Her carelessness and failure to adequately complete her job should bring the Nurse exile, at the least. Aside from the punished, there exist those who deserve pardoning. Both Lord and Lady Capulet deserve absolution.

Lord Capulet deserves pardoning because throughout the play he has tried to keep as much peace as he can between the families. At the Capulet ball, upon learning of Romeo’s presence, Capulet responded by allowing Romeo to stay. He even complimented Romeo, and called him “a virtuous and well-governed youth. ” (I. v. 77) In addition, Capulet has already received his own from of punishment. In Act I, Scene ii, Capulet speaks to Paris about Juliet. He tells the County that the “Earth hath swallowed all my hopes” and that Juliet is “the hopeful lady of my earth. (lines 14-15) This suggests that Capulet has had other children, but that they have all passed away, leaving Juliet as his only hope and heir. When Juliet committed suicide, Capulet had to deal with the grief of the death of his last child. Above all, Lady and Lord Capulet could not have possibly controlled everything their teenage daughter did, but what parent can? Lastly, Lady and Lord Capulet didn’t even know about their daughter’s relationship with Romeo until after she died. Lady and Lord Capulet couldn’t have done anything to stop this tragedy and therefore should be pardoned.

In a similar way to Lord Capulet, Lord Montague does not deserve punishment because he has already received his own punishment as a result of this tragedy. He not only lost his son, but he also lost his wife. In the light of Romeo’s suicide, Montague announces that “grief of my son’s exile hath stopped her [his wife] breath. ” Controlling every action and decision Romeo made would have been impossible for Montague as well, thus making the tragedy not his fault. Unlike Capulet, Montague did not directly make an effort to keep the peace. Despite this, the feud itself can be blamed on neither Capulet nor Montague.

As explained in the prologue, the rivalry is an “ancient grudge. ” (line 3) This means that both Capulet and Montague have been born into this rivalry, and that fighting between their families is all that they’ve ever known. Therefore, neither Montague nor Capulet can take the blame for letting the feud continue, hence their absolution. This leaves the benevolent Benvolio. Benvolio consistently tries to maintain peace. He tries twice to keep fights from breaking out. During the initial fight scene between the Capulet and Montague servants, Benvolio yells, “Part, fools! Put up your swords. ”

The Punished and the Pardoned – Romeo & Juliet. (2016, Oct 04). Retrieved from https://studymoose.com/the-punished-and-the-pardoned-romeo-juliet-essay 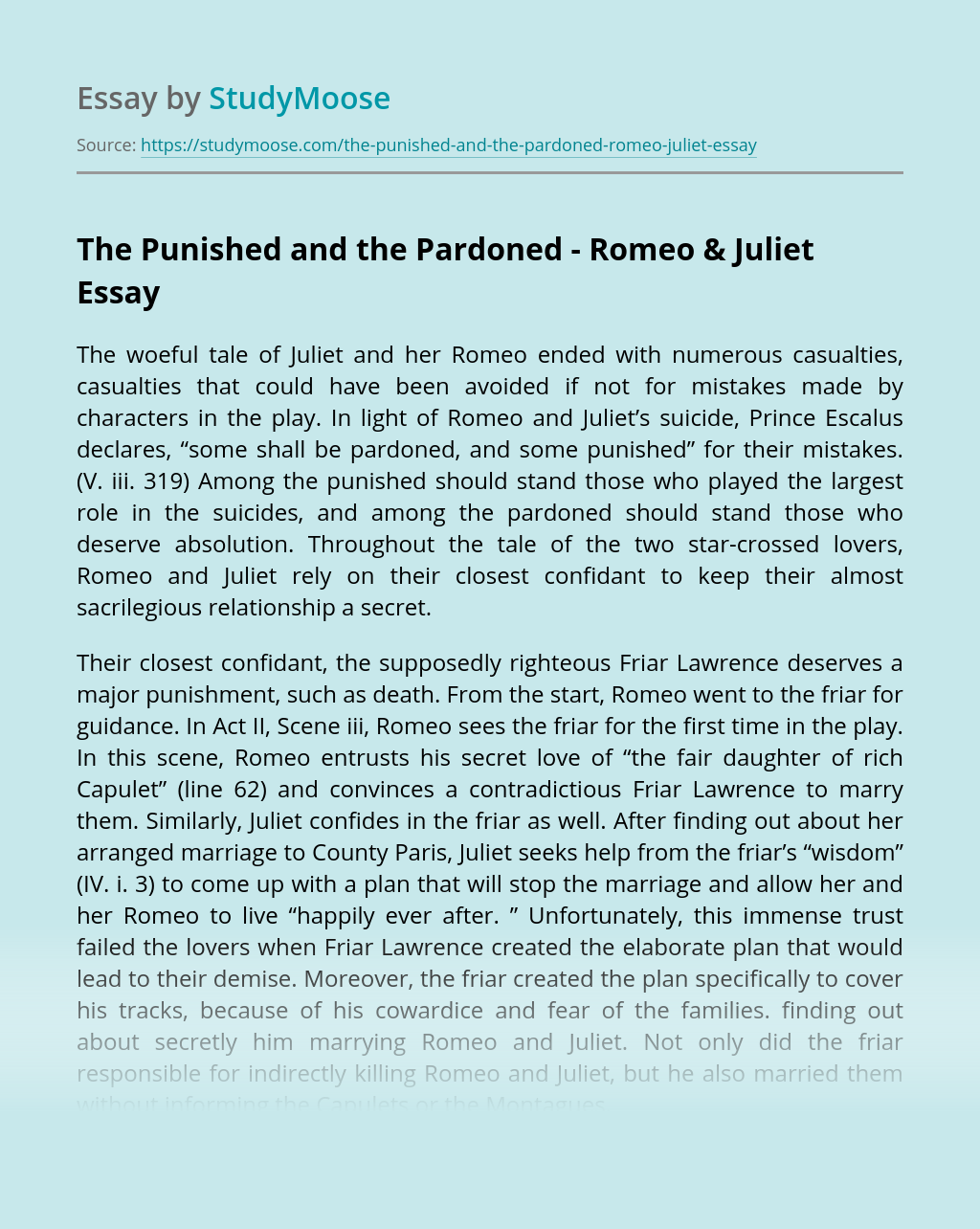 Contribution of women in the economy is very important for the growth of socio-economic environment of Bangladesh. Without a meaningful and active participation of women, half of the total population, in regular economic activities, a dynamic and sustainable economy is impossible. In view of the need to bring the rural womenfolk in the development stream... VIEW ESSAY

With Amazon’s immense reach comes responsibility, as well as opportunity. Now the largest online retailer in the U.S., with over $60 billion in sales in 2012, this e-commerce giant connects buyers and suppliers from across the world. In many ways, Amazon can be seen as a greener option than traditional storefront retailers because it does... VIEW ESSAY

View sample
Get Essay
Knowledge without application is worthless

A distinct art form like a poem, novel or play, a short story is a short piece of writing, having few characters, conflicts, a theme, a setting and a point of view, usually fewer than 10,000 words. Every detail contributes to the unity of effect. Most short stories can connect if they include similar elements,... VIEW ESSAY

A Lesson Learned The Outsiders Essay Imagine living on the streets, a brother for a parent and being torn between two deadly rival gangs. In the novel The Outsiders by S. E. Hinton, three teenage boys wander around their hometown, unaware of the dangers that lurk behind each alley. Due to their chaotic experiences in... VIEW ESSAY