Why Do Some Teens Commit Suicide

To hear news of a young individual in their teens passing away can be very devastating, and may be one of the worst tragedies to be fall fellow family members and friends. According to the Centers for Disease Control and Prevention (CDC), suicide is the third-leading cause of death for 15-24 year-olds, after accidents and homicide. The fact that some people feel they have to resort to suicide is tragic considering that it is preventable, however, often times it becomes too late to stop the situation before it occurs.

Turn in your highest-quality paper
Get a qualified writer to help you with
“ Why Do Some Teens Commit Suicide ”
Get high-quality paper
NEW! AI matching with writers

Various factors can cause an individual to believe that suicide is the only option to solve any personal problems they may be dealing with. Mental illness, substance abuse, and a history of family suicide may be leading causes of suicide in teenagers. A large majority of teenagers who are contemplating suicide often have a mental illness which can include depression, anxiety, a bipolar disorder or just a combination of all. Depression, in fact, happens to be the leading factor of suicide with teenagers who suffer from a mental illness.

Depression may be found in teenagers who have no hope for a better future, have been released from a hospital, experienced the death of a close family member, or have had previous suicide attempts.

It is estimated that a total of about 2-15% of teens that have been diagnosed with major depression, commit suicide. Seeing young individuals struggling with thoughts of suicide often brings tears to our eyes because of the bright futures they have ahead of them.

There are many indicators that a teenager may be having suicidal thoughts due to a mental disorder, however, most people often mistake these indications to be “just a phase” they may be going through. Often times when reality strikes, people start to regret that they had mistaken certain behaviours to be “just a phase” when they could have been doing something to help the situation from escalating. Regularly consuming drugs and alcohols begins to lower an individual’s self-conscious, which often results in them gambling with their life. Studies show that teenagers who drink or use drugs are much more likely to have suicidal tendencies than those who do not use substances at all. Many teenagers choose the substance abuse path because of depression, and believe it is a form of self- medication that can help treat their painful psychological symptoms in a socially acceptable manner.

Unfortunately, this is not the case because substance abuse can cause social isolation, low-self esteem and separation from family and friends all of which in turn can result in a suicide attempt. It is proven that substance abuse occurs most frequently among teenagers and adults compared to older individuals due to tough situations they may face on a regular basis. Consuming substances may allow a young individual to feel relaxed at a certain point in their life for a short period of time, however, the negative consequences out way the positive. It can be theorized that teenagers who have parents or a close family member who have committed suicide are more likely to die by committing suicide themselves. Most children view their parents as role models, and often times develop a sense of what is right and wrong based on their actions. One would often seek approval from a parent or a close family member, whether it be choosing the proper meal or what type of clothing is best. When a role model chooses to commit suicide as a solution to life’s problems, the idea of using suicide as a way out is embedded into the young individuals mind. They will tend to believe that taking one’s life away is the only solution to life problems and labelled to be acceptable.

According to study researcher Ping Qin, from Aarhus University in Denmark states, “A family history of psychiatric illness only increases suicide risk by increasing the risk of developing a mental disorder. However, by including the family history of suicide is important in allowing to help identify people vulnerable to mental disorders who are associated with suicide.” When a family member commits suicide, close relatives often place blame on themselves for letting the situation escalate. Therefore, one must think about the negative impact they may cause on his or her close family members because of the selfish suicide attempt they plan to take. In conclusion, mental illness, substance abuse, and the suicide of a family member may cause a teenager to use suicide as a way to escape their problems.

Assistance is available for individuals who suffer with suicidal thoughts, however, the individual must admit to themselves that he or she has a problem and seek help. Often times even the people closest to them do not realize what they are dealing with. There are many signs that indicate a teenager is thinking of committing suicide, such as depression, talking about suicide, having trouble concentrating or thinking, pulling away from friends or not wanting to go out, and among others. Unfortunately if no one realizes these unhealthy behaviours, a teenager may go through countless attempts trying to committing suicide until finally finding the most effective one, and by the time that occurs it is too late.

Why Do Some Teens Commit Suicide. (2016, May 13). Retrieved from http://studymoose.com/why-do-some-teens-commit-suicide-essay 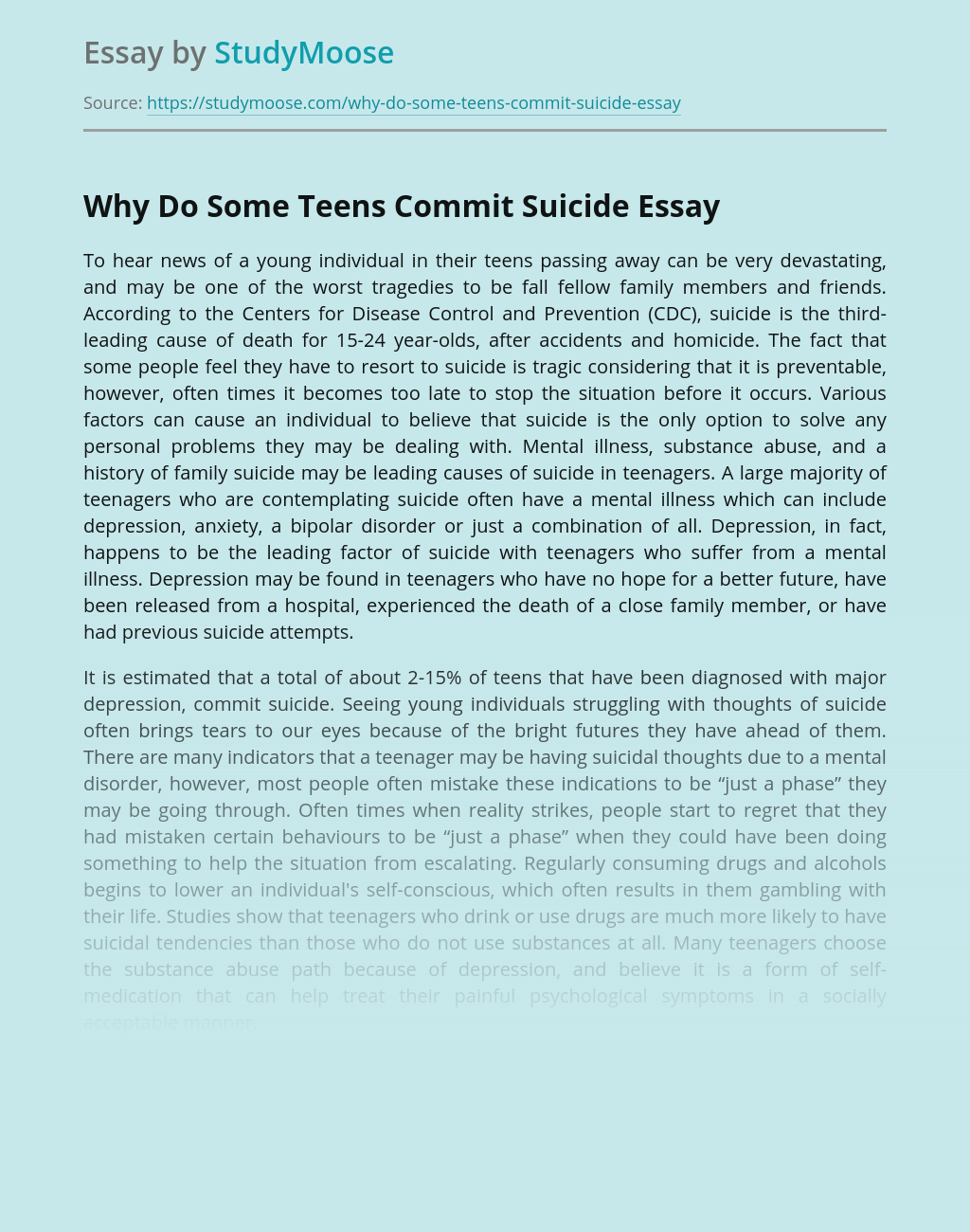 Turn in your highest-quality paper
Get a qualified writer to help you with
“ Why Do Some Teens Commit Suicide ”
Get high-quality paper
Helping students since 2015
Stay Safe, Stay Original