Kurt Vonnegut’s novel, Slaughterhouse – Five appeared on the list of Time magazine’s 100 all time best English language novels since 1923. Written in 1969, this novel is considered a classic and is also known as one of his best works. Slaughterhouse -Five spans the different time periods of the life of Billy Pilgrim, the protagonist. Vonnegut witnessed the Bombing of Dresden in World War II, and this novel portrays the aftermath of the war. Vonnegut uses time travel as the plot device to portray human conditions from an unusual perspective.

Don't use plagiarized sources. Get your custom essay on
“ Kurt Vonnegut ”
Get custom paper
NEW! smart matching with writer

He was a prisoner in the Battle of Bulge in December 1944; in Dresden, Germany as a battalion scout. In all likelihood, the bombing of Dresden saved him from being sent to the Auschwitz gas chambers. Vonnegut was among the few survivors that were taken as prisoners to a slaughterhouse during the war and he worked in a meat-locker under this slaughterhouse, making diet supplements for pregnant women . The title refers to the slaughterhouse where Billy stayed as the prisoner of war.

Vonnegut combines science fiction elements along with human conditions in the aftermath of the Dresden bombing, to drive the point.

Slaughterhouse-Five is the story of a man Billy Pilgrim who has “come unstuck in time”. This term refers to his surviving a plane crash where he suffers a minor brain damage. Vonnegut has created a satire on fatalism. He believes that no matter how distressing the situation of a man is; he has the power to create his own reality through the sheer power of imagination.

Billy Pilgrim experiences different time periods of his life especially his experiences of the World War II. The seemingly random happening of his life structures the thematic elements of the novel in an unraveling order.

The novel examines many events in Billy’s life. This includes the death of his wife, his capture by the Nazis in World War II, and the unfortunate bombing of Dresden, which also became the inspiration of this book. The major theme comprises of the narrative that depicts Billy’s difficult times in Dresden, the secondary theme that runs through is his easy and affluent life as an optometrist in the city of Illium, New York, which is a fictional stand-in for Troy, New York, the city of Schenectady, New York.

This is the place where Vonnegut has based most of his novels. The fiction runs parallel to the story of Vonnegut’s own transition from the depressing years of 1930’s, which was also the time period when ‘The Great Depression’ occurred, to a well to do existence that followed. The satirical essence of the novel is portrayed by the repetitive phrase, “so it goes” which Vonnegut uses to describe death and dying; whether it is of man, animal or the bubbles of champagne. He uses it to downplay the fact of ‘mortality’; making it sound humorous and routine.

Some would say that his writings are creepy, but the fact is that he wrote beautiful, bizarre and horrifying novels replete with dark humor, and that set him apart as a unique writer. In Slaughterhouse –Five he uses words and phrases such as, “mustard gas” and “roses” to describe the rotting smell of a corpse, and the breath of an alcoholic. This novel explores the idea of fate, freewill and illogical nature of human beings. In the first chapter the narrator apologizes about the fact that the novel is so “short and jumbled and jangled” and then goes on to explain the fact that there is nothing intelligent to say about a massacre.

The satirical tone and the dark humor is the alibi, which he uses to describe the horrific aftermath of bombings and war in general. There are three themes that he uses in Slaughterhouse –Five. The first and foremost theme is the- War. He writes about the contrasts of war; which is love, beauty, humanity, innocence, humor etc. In Slaughterhouse –Five just like his many previous novels, he says that war is bad for us and it is better to love one another and live in peace, than have wars.

However, she doesn’t use love as the contrast of war, since Billy Pilgrim was not shown as a man who is madly in love with his wife. Yet he chose to depict it in a light yet effective manner. An interesting contrast Vonnegut uses in his novels are differences between the characteristics of men and women. Men are shown as cruel and ready to he engage in war any time, and the females are the shields, playing the shock absorber’s effect capably, as they are always engaged in trying to dissuade men from getting into wars.

Women in Vonnegut’s novels are more humane, loving and have strong wills. The most compelling theme is that we as people are like bugs trapped in an amber and there are no “whys “ to it. In a sequence in the novel, when Billy is trapped in Tralfamadorin Flying Saucer he asks, “Why me? ” “…. Why you? Why us for that matter? Why anything? Because this moment simply is . Have you ever seen bugs trapped in amber? ” Billy was asked, and he recalls that he in fact had a paperweight in his office, which was a blob of polished amber with three ladybugs trapped inside it.

Billy answers in affirmation and he is told: “ Well, here we are, Mr. Pilgrim, trapped in the amber of this moment. There is no why. ” (ibid pg. 76-77). This extraterrestrial experience of Billy is symbolic of the fact that we are physically stuck in this world with no choice over our circumstances. In Vonnegut’s novels there are no set themes or plot that follows the story of heroes, heroines or villains. As Ernest W. Ranly says that all the characters in Vonnegut’s books are “comic, pathetic pieces, juggled about by some inexplicable faith, like puppets. ” (Riley, 1974, pg. 54).

Vonnegut himself says in his book Hocus Pocus that if there is no one to take the blame for the bad happenings in the book, it can only mean that the villain is God Himself; “ or Herself or Itself or Whatever” (Vonnegut, Hocus Pocus, 1990). Another significant theme is that there is no soldier, only man. Being a soldier is a myth as a soldier is just a puppet of war used to do as the war demands. He doesn’t remain a human being anymore. Vonnegut expresses this thought most noticeably in this extract from the novel from the time when Billy was imprisoned in Dresden.

When the three fools found the communal kitchen, whose main job was to make lunch for workers in the slaughterhouse, everybody had been waiting for them impatiently. She was a war widow. So it goes. She asked Gluck if he wasn’t awfully young to be in the army. He admitted he was. She asked Billy Pilgrim what he was supposed to be. Billy said he didn’t know. He was trying to keep warm. “All the real soldier are dead. ” She said. It was true. So it goes. (Vonnegut 1969. Pg. 159). Another obvious theme is that death is inevitable.

It also goes on to explain that life goes on, no matter what happens and who dies. The phrase “so it goes” occurs one hundred and six times throughout the novel; it happens every time someone dies, to take away the seriousness of death and impart a humorous quality to its inevitable graveness. This book has different meanings for different people, as everyone would be likely to interpret its subtle messages in their own way. The point that Vonnegut wanted to make was that no matter what happens , we should retain our humanity. 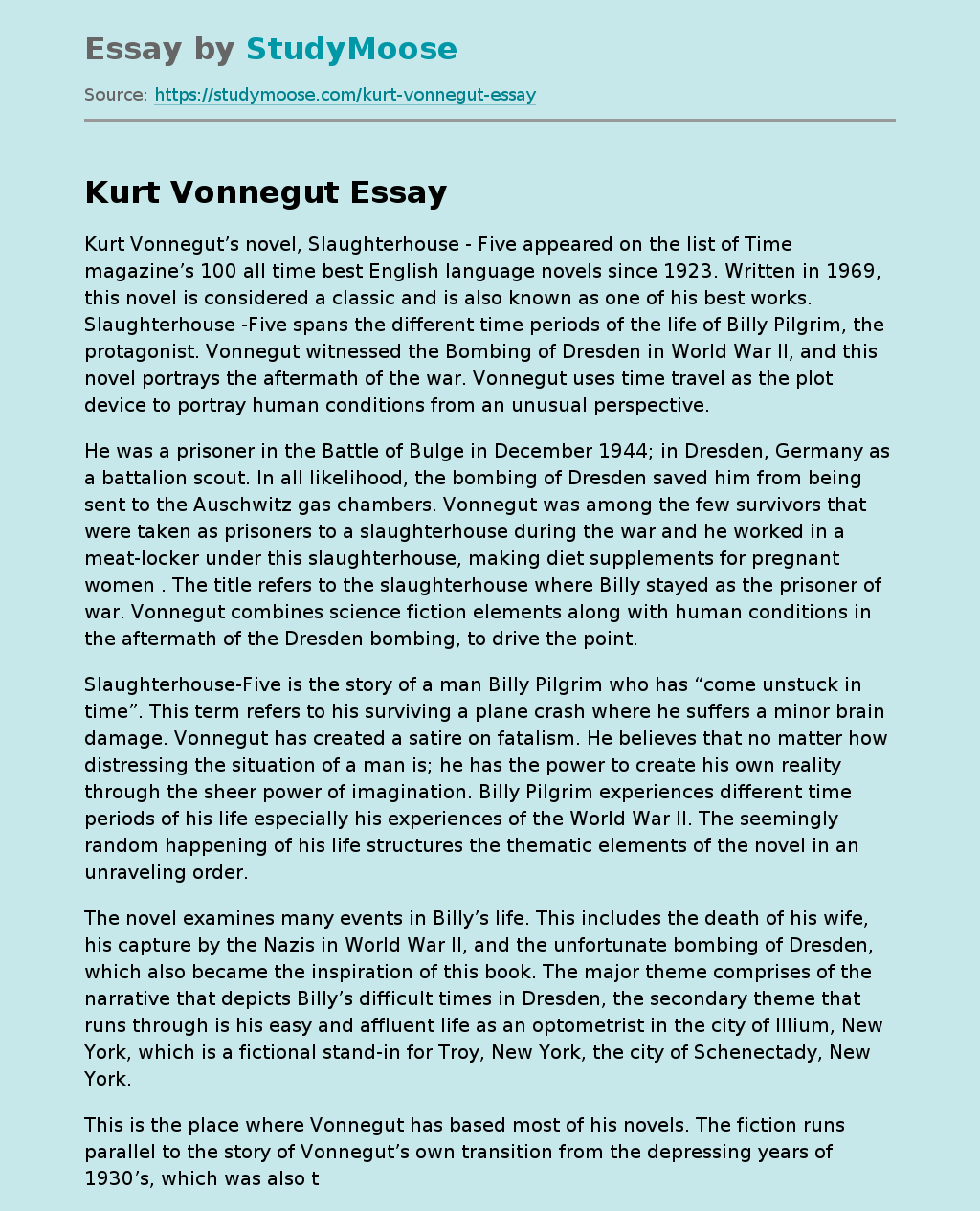