Determinism Versus Free Will in Slaughterhouse Five

Is the life of each individual already planned? Is each turn their life takes just in the path that has already been laid out for them? Or does each person have the power to choose the path in which they will follow everyday? In Slaughterhouse Five Kurt Vonnegut leads the reader to believe in determinism or fate as the essences of life. Billy Pilgrim is a veteran of World War II and of the bombing of Dresden. This experience has greatly affected who he is.

Don't use plagiarized sources. Get your custom essay on
“ Determinism Versus Free Will in Slaughterhouse Five ”
Get custom paper
NEW! smart matching with writer

After the war Billy moved back to his hometown, got married, had some kids, and had a very successful carrer as an optometrist.

Billy may sound like an ordinary guy, but there is one characteristic that Billy has that sets him apart from most other people; he can travel in time to different points in his life. He does nothing to try and change his course of action. Billy does not believe in free will. Which is why he does not try to change his paths of life.

Does each person really have complete control over the paths they will follow in life? In reading Slaughterhouse Five the reader begins to see that maybe they do not have the option of free will in their life. Their life was planned for them before they were born.

This is Billy Pilgrim’s belief and it plays a major significance in his life throughout Slaughterhouse Five. Throughout the entire novel Billy Pilgrim allows fate to control his life.

He has already seen his whole life, and continually travels in time to different points in his past, present, and future. Billy was a creation of Kurt Vonnegut, and therefore the beliefs and questions that Vonnegut has about life come through in his character of Billy Pilgrim. Vonnegut asked himself about the present: “how wide it was, how deep it was, how much was mine to keep” (page 18). This was a question about determinism; maybe he could change his life.

Maybe there was not a path in which he had to follow. We see this through Billy. There were times in which he had the opportunity to change the sequence of his life. Although he never actually did anything about it, he still had thoughts of free will and controlling his own life. Throughout Billy’s life he endured many hardships, and even knowing that they were coming, he did nothing to stop or change them. There was nothing he could do, his life was already predetermined by fate; at least that was his belief by then. The Tralfamadorians taught Billy about his belief in determinism.

The Tralfamadorians thought that humans were crazy for believing in free will. “I’ve visited thirty one inhabited planets in the Universe, and I have studied reports on one hundred more. Only on Earth is there any talk of free will” (page 86). This was the response the Tralfamadorians gave Billy when he spoke of free will. “You sound to me as though you don’t believe in free will”, said Billy Pilgrim (page 86). The Tralfamadorians had complete faith in determinism. It is the only way in which they would think. There is no way an individual could determine the course of actions in which they will take in life.

The Tralfamadorians belief is that “time simply is” (page 86). So therefore life “simply is”. Each individual shall follow the life that has already been determined for them. Spending time with the Tralfamadorians is what led Billy to have this belief about life. There is no way to avoid in life what has happened, is happening, and will happen, according to the Tralfamadorians. This is because of fate, a leading role in the life of Billy Pilgrim in Slaughterhouse Five. Billy Pilgrim was such a strong believer in determinism that even seeing his own death many times did not stop him from going to different places at a different time.

He was giving a speech and told the audience that it was “high time I was dead” (page 142). He knows that he was going to be killed by Paul Lazzaro, ” enjoy life while you can. Nothing’s going to happen for maybe five, ten, fifteen, twenty years. But lemme give you a piece of advice: Whenever the doorbell rings, have somebody else answer the door. ” (page 141) He followed through with this promise. On that fateful day, knowing well that Lazzaro would be there to kill him, Billy kept his date with death. Billy did nothing to change his situation.

He knew that this was how he was going to die, and stayed there waiting for it to happen. He could have made the choice to be in a different place, but did nothing. His belief in determinism was held strong, so therefore he would never do anything to change his life. He accepted whatever fate had to offer him without any complaints or criticism. He tried to make the best out of his situation. That is all that can be done when life is predetermined. The Tralfamadorians led Billy to believe in determination in his life.

Billy knew every twist and turn that he would experience during his time on earth, and did nothing to change it in any way. Even knowing about his own death did not lead him to change or do anything different. This was a perfect example of Billy’s complete faith in determinism. Slaughterhouse Five was a book all about determinism. Free will was not shown in the characters throughout the novel. Vonnegut must not believe that each individual can make a choice about their life. Billy Pilgrim truely did not, and he was a creation of Vonnegut’s. Why should each person believe in free will? Is it even possible?

Determinism Versus Free Will in Slaughterhouse Five. (2020, Jun 01). Retrieved from http://studymoose.com/determinism-versus-free-will-in-slaughterhouse-five-new-essay 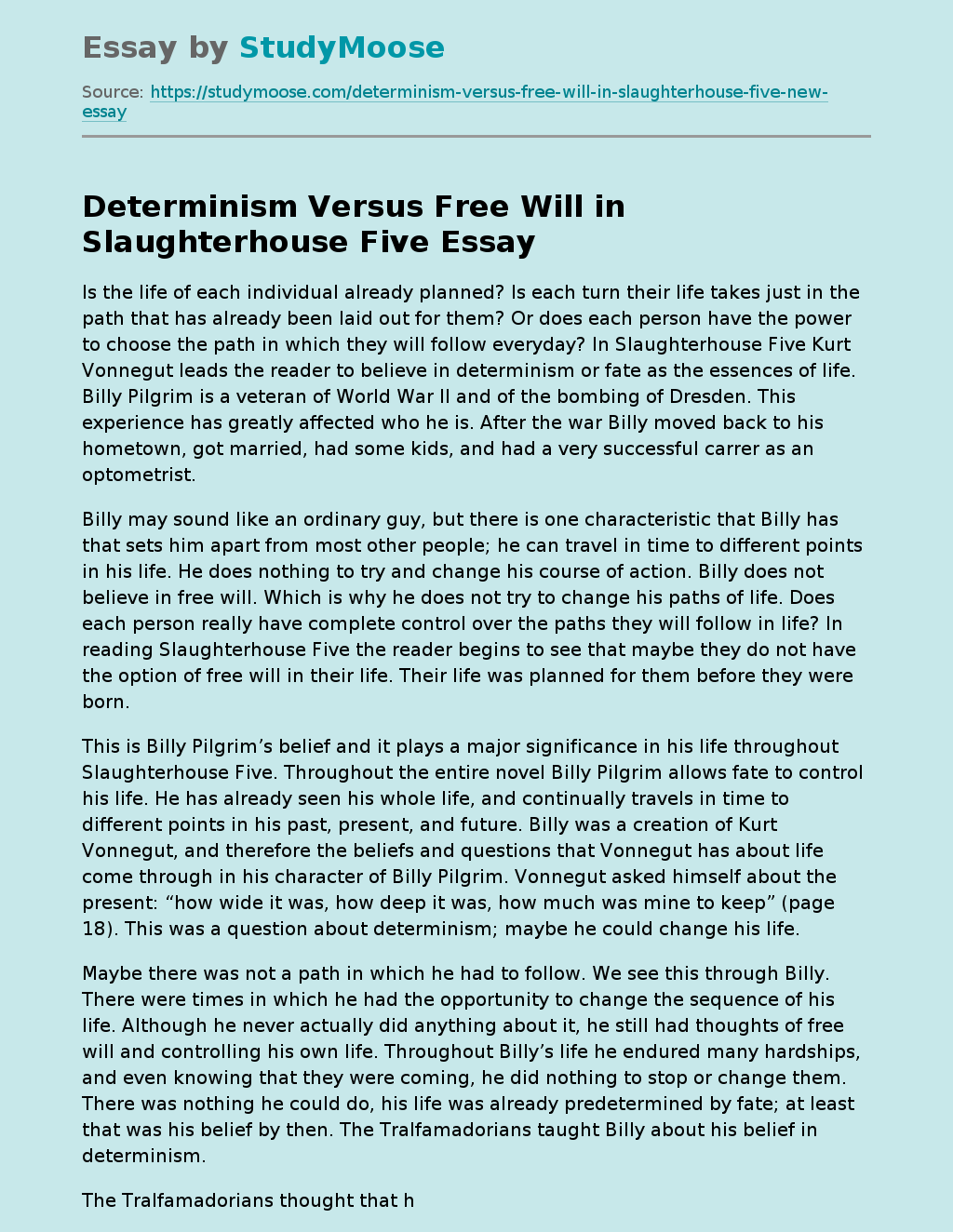