The Compatibility of Free Will and Determinism

One of the biggest issues regarding criminal activity is deciding how to assign moral responsibility to each situation. This critical question has caused the world to take a step back, ponder the origination of individual choices, and decide whether people are determined or not. Determinism supports the claim that “all events are the necessary result of previous causes” (Lawhead, 267). Therefore, a determinist would say that our choices are inevitable outcomes of the causal order.

Incompatibilism claims that determinism is not compatible with the sort of freedom required to be morally responsible for our behavior.

Don't use plagiarized sources. Get your custom essay on
“ The Compatibility of Free Will and Determinism ”
Get custom paper
NEW! smart matching with writer

On the other hand, compatibilism refers to the notion that if determinism is true, then free will can still occur. I shall argue that determinism and free will are not compatible, that people do have the freedom necessary to be held accountable for their actions, and that, therefore, compatibilism does not accurately capture the idea of philosophical freedom.

I will do this by contrasting metaphysical and circumstantial freedom, explaining why metaphysical freedom cannot co-exist with determinism, and rebutting objections to this theory.

My claim is that people do have the freedom necessary, that is, the ability to freely and consciously make a decision, and therefore, are accountable for their actions. In order to understand this claim, I must first elucidate what it means to be free. Two kinds of freedom are relevant to this issue: circumstantial freedom and metaphysical freedom. Circumstantial freedom refers to our ability to carry out any action we choose.

William Lawhead, author of The Philosophical Journey, explains that “circumstantial freedom is a negative condition, because it means we are free from external forces, obstacles, and natural limitations that restrict or compel 3 our actions” (Lawhead, 266).

In this regard, external forces such as being held hostage would cause you not to be free. While we must have circumstantial freedom in order to act, it is a minimal condition compared to metaphysical freedom. Metaphysical freedom is “the power of the self to choose among genuine alternatives” (Lawhead, 266).

Metaphysical freedom is the sort of freedom that allows the self to make free and undetermined decisions. The self, therefore, is the originating cause of a decision, rather than one’s determined history. Additionally, this freedom, which holds the self accountable for actions, is required to be morally responsible. The controversy is whether this freedom can coexist with causality. To assess the compatibilism of free will and determinism, it is important to understand the term causation. Supporters of causality believe that we are determined and argue that everything that happens in nature and in human behavior is inevitable.

In other words, we can not act otherwise, because the past shapes the future. John Stuart Mill, a 19th century philosopher, supports this idea: “given the motives which are present to an individual’s mind, and given likewise the character and disposition of the individual, the manner in which he will act might be unerringly inferred: that if we knew the person thoroughly, and knew all the inducements which are acting upon him, we could foretell his conduct with as much certainty as we can predict any physical event” (Lawhead, 267).

On the other hand, other theorists would argue that determinism would strip us of our humanity. The philosophical school of thought which maintains that free will and determinism cannot co-exist is called the incompatibilist approach. There are two categories of incompatible determinism: hard determination and libertarianism. I will explain these two theories to you, in order for you to understand why compatibilism does not accurately capture the idea of philosophical freedom. 4 Unlike compatibilists, hard determinists argue that we do not have metaphysical freedom, and that all events, which include, our choices, beliefs, and actions, are the predetermined results of previous causes.

Therefore, it is believed that we cannot be held morally accountable for our actions because we lack free will. S. Clarence Darrow, a famous defense attorney, expresses this claim in a speech to prisoners in jail: I do not believe there is any sort of distinction between the real moral conditions of the people in and out of jail. One is just as good as the other. The people here can no more help being here than the people outside can avoid being outside. I do not believe that people are in jail because they deserve to be.

They are in jail simply because they cannot avoid it on account of circumstances which are entirely beyond their control and for which they are in no way responsible. (Lawhead, 270) Hard determinists argue that the only way to prevent people from committing crime, is to eradicate the conditions in society that make people criminals. Libertarians, in contrast, argue that we do have metaphysical freedom and are not completely determined.

Unlike Darrow, the libertarian would argue that criminals have the free will to choose how to behave. Libertarians argue that people should be held accountable for their actions because they have the ability to make free choices and are not lawfully determined . The novel, Walden Two, written by B. F. Skinner, touches on this approach. Castle, a character in the novel, is told that his actions are lawful and are not driven by choice. Castle refutes this claim by saying, “it’s easy to argue lawfulness after the fact. But let’s see you predict what I will do in advance” (Lawhead, 274).

According to the libertarian approach, because all choices are not subject to causal necessity, and are often free and spontaneous, it is not possible to predict every 5 aspect of a person’s behavior. If human actions were determined, we would be able to predict a person’s daily activities as we are able to predict the weather. Since we are not able to do so, I must assume that we are not determined and therefore, do have free will. The arguments of both libertarianism and hard determinism are premises for supporting my central claim of incompatibility.

Possible objections to my central claim are evident in arguments of theorists who support soft determinism. Soft determinism is the theory that both free will and determinism are compatible, and that they can occur simultaneously. Different from the hard determinist, the soft determinist claims that although we are determined, we do have control over some of our choices. Compatibilists claim that: “if the immediate cause of your action is your own psychological states, including your will, choices, values, or desires, then it is a free or voluntary action for which you can be held responsible.

At the same time, the compatibilist insists that your personality, motives, and values are completely determined by previous causes” (Lawhead, 270). Therefore, compatibilists do not believe that we possess metaphysical freedom. They claim that circumstantial freedom is the only sort of freedom necessary for a person to be held accountable for their actions. W. T. Stace, a compatibilist, takes a unique stance: “Moral responsibility is not only consistent with determinism, but requires it. The assumption on which punishment is based is that human behavior is causally determined.

If pain could not be a cause of truth-telling, there would be no justification at all for punishing lies. If human actions and volitions were uncaused, it would be useless either to punish or reward, or indeed do anything else to correct people’s bad behavior. For nothing that you could do would in any way influence them. Thus, moral responsibilty would entirely disappear” (Lawhead, 306). 6 Although these counterarguments find flaws in my argument for incompatibilism, my objection to Stace is that the opposite is true: punishment is actually based on the concept of free will and responsibility for one’s actions.

If our actions were wholly determined, there would be no point in punishing as a deterrent, or even in the pursuit of justice, as any attempt at changing behavior would be futile. The entire concept of punishment would be moot, other than as a means of vengeance. Additionally, the notion of free will and determinism occurring simultaneously is difficult for me to comprehend as I strongly agree that one must occur without the other. Whilst determinism relates to how our actions are determined, free will, or metaphysical freedom, clarifies that we are all responsible for our actions as we have choice.

If a scientist were to bombard your brain with chips that would cause you to have particular values and beliefs, would it mean anything to say your choices, based on psychological motives and beliefs, are free (Lawhead, 311)? I don’t believe that it would and this argument poses a problem for the compatibilist claim. Circumstantial freedom does not sufficiently account for peoples’ actions, just as compatibilism does not sufficiently explain free will and determinism. Therefore, like incompatibilists, I believe that free will is a necessary condition for moral responsibility and that both conditions cannot co-exist with determinism.

Furthermore, I agree most with the libertarian approach. I believe that we possess the freedom necessary to be considered undetermined. We are certainly influenced by our upbringing and past. However, to say that our choices are inevitable and caused by previous events is unfathomable to me. To live a life determined would not be much of a life at all. 7

The Compatibility of Free Will and Determinism. (2016, Nov 10). Retrieved from http://studymoose.com/the-compatibility-of-free-will-and-determinism-essay 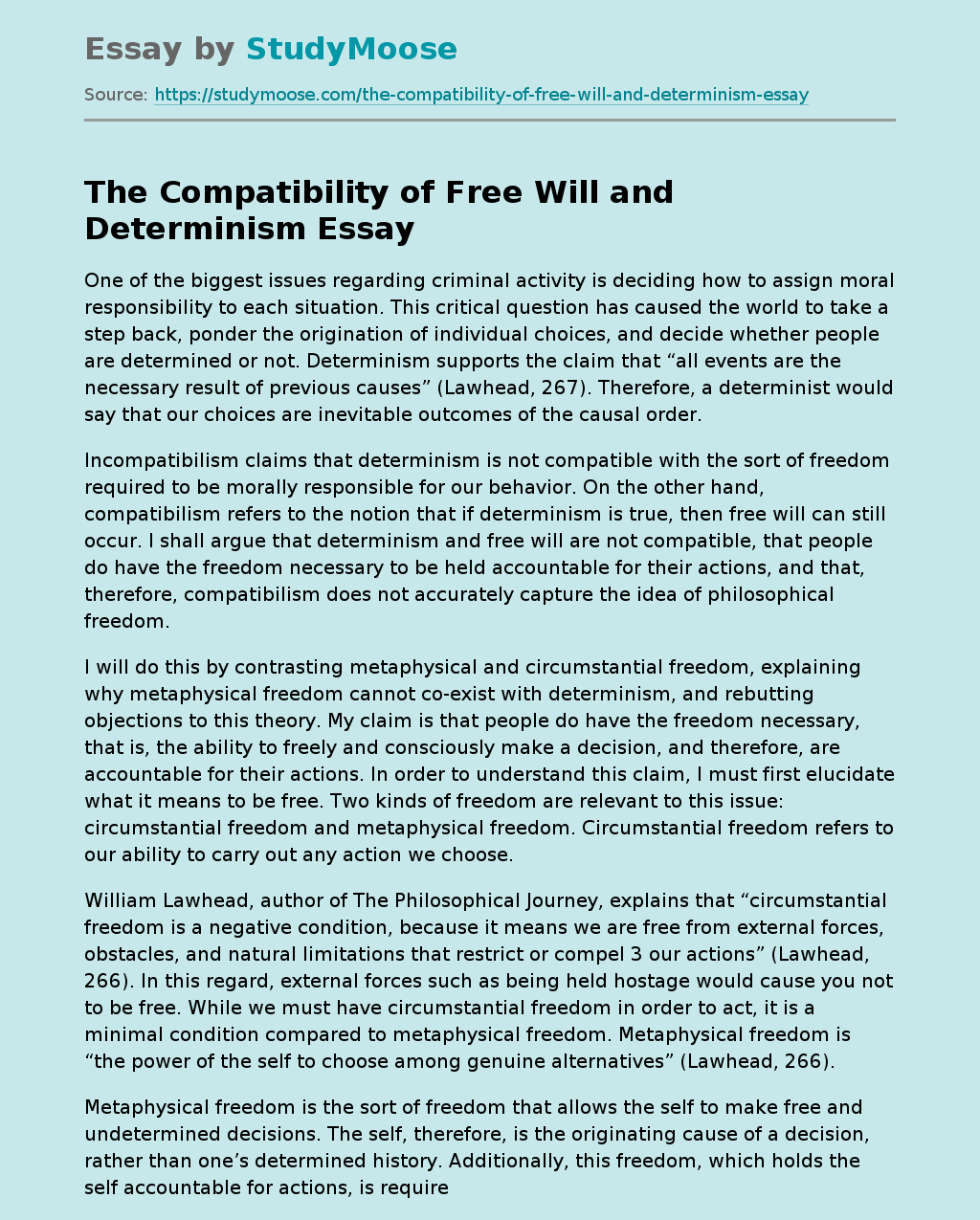