Chisholm's Human Freedom and Free Will

Before I begin it is pertinent to note the disparate positions on the problem of human freedom. In “Human Freedom and the Self”, Roderick M. Chisholm takes the libertarian stance which is contiguous with the doctrine of incompatibility. Libertarians believe in free will and recognize that freedom and determinism are incompatible. The determinist also follow the doctrine of incompatibility, and according to Chisholm’s formulation, their view is that every event involved in an act is caused by some other event.

Don't use plagiarized sources. Get your custom essay on
“ Chisholm’s Human Freedom and Free Will ”
Get custom paper
NEW! smart matching with writer

Since they adhere to this type of causality, they believe that all actions are consequential and that freedom of the will is illusory. Compatiblist deny the conflict between free will and determinism. A. J. Ayer makes a compatibilist argument in “Freedom and Necessity”. In “Human Freedom and the Self” Chisholm rejects both determinism (every event that is involved in an act is caused by some other event) and indeterminism (the view that the act, or some event that is essential to the act , is not caused at all) on the basis that they are not contingent with the view that : human beings are responsbile agents.

Also, if the act was not caused at all, the person cannot be responsible for it, that is, human responsibility and indeterminism conflict.

So if either determinism or indeterminism were true, there would be no other alternate courses of action and people would not be morally responsible because they could not have done otherwise. We’ve already established that Chisholm feels that humans can be morally praiseworthy or blameworthy only if they have free will. His example is one man shooting another man. Although the man performed the act it was also in his power not to perform the act. I know I’m starting to sound but bear with me.

Since the act which he did perform is an act that was in his power not to perform then could not have been caused or determined by any event that was not itself within his power either to bring about or not to bring about. Next, he gives another hypothetical situation in which under hypnosis a man was unable to do anything other than what it is that he did. Chisholm then asks us to use the same situation and replace hypnosis with the man’s desires and beliefs with the same consequence that he could not have done otherwise.

So since this caused him to acquire the belief he could not have done otherwise and is not responsible for his belief or desire. Later Chisholm says that if we are prime movers unmoved (a concept I will explain later) and our actions, or those for which we are responsible, are not causally determined, then they are not causally determined by our desires. The next problem Chisholm has to tackle is the question; is determinism consistent with human responsibility? If the answer is yes then this implies that that the agent could have done otherwise even though he was caused to do what he did do (compatibilist argument).

The standard objection to Chisholm’s position is to show that determinism (and Divine Providence) are consistent with human responsibility. They argue that the expression (A) He could have done otherwise is synonymous with (B) If he had chosen to do otherwise, then he would have done otherwise. Chisholm proceeds to demonstrate that this is not a sound argument. He says that from the statement (B) we cannot make an inference to (A) unless we also assert that (C) he could have chosen to do otherwise. The ascription of responsibility conflicts with a deterministic view of action.

So, Chisholm’s view is that we can’t say that every event is cased by some other event (determinism), and we can’t say that the act is something that is not called at all (indeterminism). What we should say is that at least one of the events that is involved in the act is caused, not by other events, but by something else instead. Namely, the agent. This means that there are some events that are not caused by other events. This means that we are not committed to saying that there is something in the event that is not caused at all since it was caused by the agent.

Chisholm responds by asking what is the metaphysical difference between the brain event merely happening and the event being immanently caused by man? If the brain event is immanently caused by man then it can’t be possible that another event caused it. So there is no difference. Another objection comes from the statement I just mentioned that immanent causation is faulty because whatever is caused by the agent itself is not caused by another event. If the agent were caused to make this happen, then it would not be immanent causation.

Chisholm handles this argument by saying that this represents an error in our general understanding of causality and not that of immanent causation. Chisholm does not use the word free will because he thinks that if there is a “will” as a moving faculty, the question is whether the man is free to will to do those things that he does will to do. And also whether he is free not to will any of those things he does will to do, and whether he is free to will any of those things that he doesn’t will to do.

Chisholm's Human Freedom and Free Will. (2016, Nov 09). Retrieved from http://studymoose.com/chisholms-human-freedom-and-free-will-essay 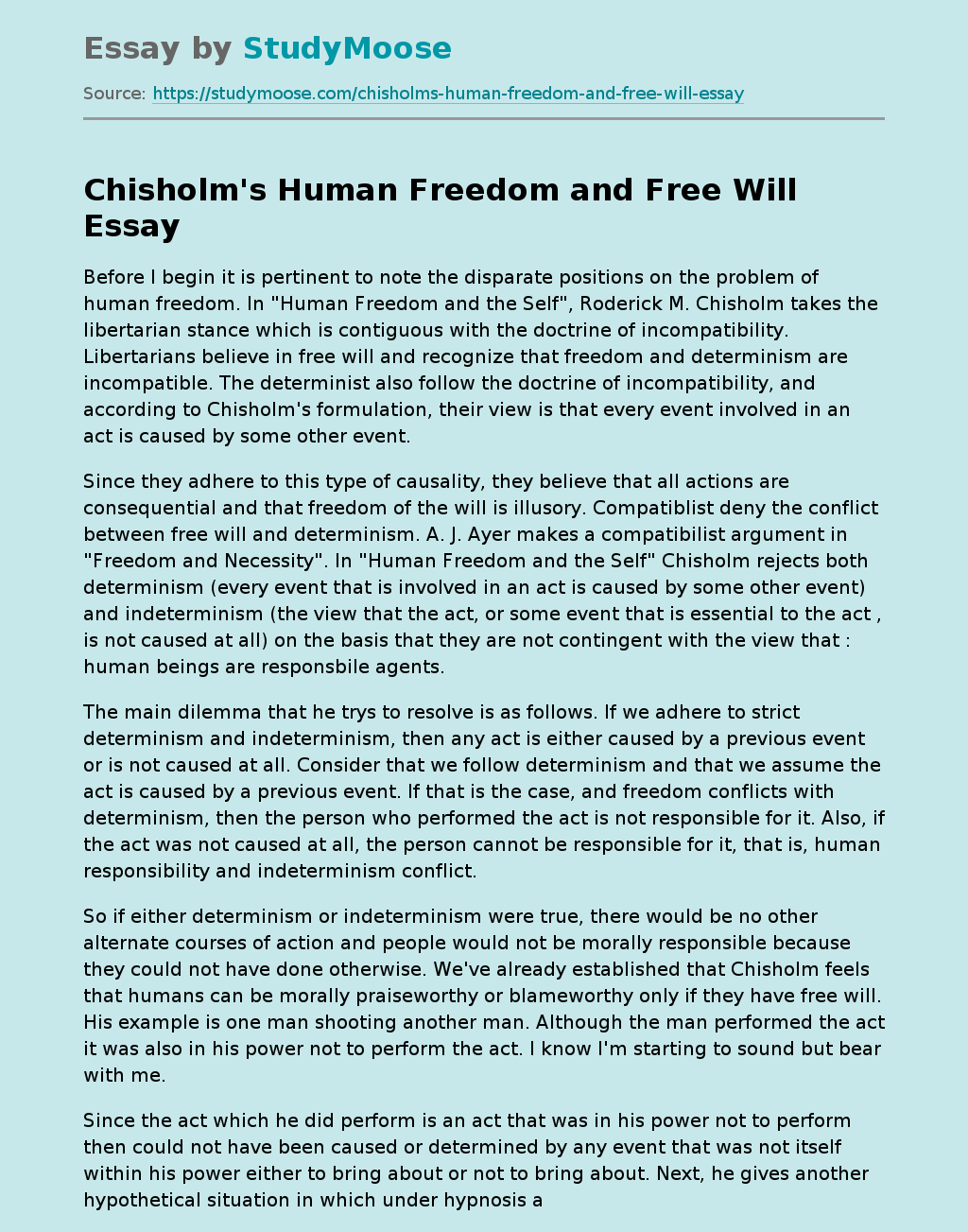