Analysis of Out, out By Robert Frost

“Out, out” by Robert Frost is a poem in which the language is matched to the subject matter in order to enhance the readers understanding of a poem. Frost has experienced the tragedy of losing a child in his life and this poem was based upon the death of a friend’s son. The poem “Out, out” by Robert Frost is a poem about a young boy who uses a buzz saw. When fate decides the boy’s time is up, the saw cuts the boy’s hand, and the boy slowly dies.

Don't use plagiarized sources. Get your custom essay on
“ Analysis of Out, out By Robert Frost ”
Get custom paper
NEW! smart matching with writer

The main theme of the poem is the fragility of life and how life is easily lost.

As the poem opens, the poet, Frost introduces a contrast of setting:

“The buzz saw snarled and rattled in the yard… Five mountain ranges one behind the other,”

The working scene in the foreground is very orderly and organised and the “stove-length sticks of wood” emphasises. This reference to “stove” also foreshadows the boy’s sister telling him to come for dinner.

The background scene is very natural and serene. At this point, it seems as if man is very much in the controlling position over nature at this point. The onomatopoeia of “snarled” makes the saw seem like a wild animal ready to attack. The brevity of human life contrasts the longevity of nature:

“Under the sunset far into Vermont”

Nature has a prolonged existence which man will never be able to obtain which, in a sense, puts nature in the controlling position.

The word “sunset” has a sense of irony as it is the end of the day but it is also the end of the boy’s life. This again shows how life can be easily ended and introduces the irony that humans think they are in control of nature.

As the poem further develops, Frost conveys the fragility of life through the characterisation of the boy and the saw:

The saw is like a wild animal; Frost uses personification of “snarled” and “rattled” to show this. The saw is clearly a very dangerous piece of equipment and is not suitable for a young boy to be operating. So far “nothing happened” and this was simply a routine day at work and nothing out of the ordinary. The poet uses informal language to mimic the other workers:

The sense of time shows that this extra half hour of work cost the boy his life. Young people do not anticipate their death and this is conveyed through the poets word choice. This is followed by “I wish they might have said” which shows that the matter was of personal relevance to Frost.

As we reach the key incident in the story Frost builds up the tension by using short sentences:

“To tell them, Supper”

The boy is easily distracted by the thought of “supper” and loses concentration and control of the saw. This re-enforces that the boy is still young and innocent and the brevity of life. The boy’s death seemed as if it was fate:

“Neither refused the meeting. But the hand!”

The word “meeting” makes it seem as if this incident was inevitable and as if it was destined to happen. The poet now portrays the boy and his and as separate and this gives the image that the boy will not get his hand back and he might even die. The hand is hanging back:

“…half in appeal, but half as if to keep the life from spilling”

The line is split by the comma which gives the image of the boys severed hand. The word “half” is repeated to emphasise that the situation is equally weighted and could go either way: he could live but there is an equal chance that he may die. The title of the poem “Out, out” is taken from Shakespeare’s play Macbeth in the final soliloquy:

“Out, out, brief candle!

Life’s but a walking shadow, a poor player,

That struts and frets his hour upon the stage,

And then is heard no more.”

Life is like a “candle” which can be easily ended at any time. This is relevant to the poem as it emphasises the brevity of life and the longevity of nature.

The boy eventually starts to realise what is going to happen to him and this traumatises his greatly:

“Then the boy saw all

since he was old enough to know, big boy

doing a man’s work, though a child at heart”

The boy has still only realised that he may lose his hand and this is ironic as he has not realise the full implications of the situation and the fact that he might die, he is only worried that he may not be able to work. The use of “big boy” here is ironic as it is a term usually used to address a small child to make them feel more important. The enjambment represents the boys line of thought and shows that he is still young. The poet introduces some dialogue:

“Don’t let him cut my hand off

the doctor, when he comes. Don’t let him, sister!”

He is still only a child and is very frightened and concerned about the situation. He is in grave danger and is losing blood very quickly at this point. There is a slight glimmer of hope that he may survive because of the fact that he has reached hospital and is under the care of doctors but the situation is still equally weighted.

Towards the end of the poem the doctor puts him in the “dark of ether” to make him unconscious. The doctors are struggling to keep him alive when:

“The watcher at his pulse took a fright”

His heart rate suddenly drops significantly and “no one believed”. This comes as an unexpected shock and the poet uses minor sentences to portray the boy’s heartbeat. The heartbeat of the boy weakens:

The pauses mimic his heartbeat and he suddenly dies. “And that ended it” links back to the beginning and the brevity of life and how it can be easily ended. After this tragic event the doctor’s attitude is portrayed:

“And they, since they

Were not the one dead, turned to their affairs.”

They reflect fleetingly on the boy’s death and then go on with their own duties. The boy’s death, an event of enormity, is juxtaposed by the casual attitude of the doctors. They represent the general flow of life and the poet emphasises that, in the world, the boy’s deaths is highly insignificant. This also links back to the title.

Robert Frost gives the poem a very irregular rhyme scheme to mimic life and the fact that life itself is not regular the uneven rhythm also emphasises this. It is Frost’s style of writing that makes his readers feel as if they are part of the poem. His writing allows him to portray the boys life as a traffic and his writing makes his poem so unique.

Analysis of Out, out By Robert Frost. (2020, Jun 02). Retrieved from https://studymoose.com/analysis-of-out-out-by-robert-frost-essay 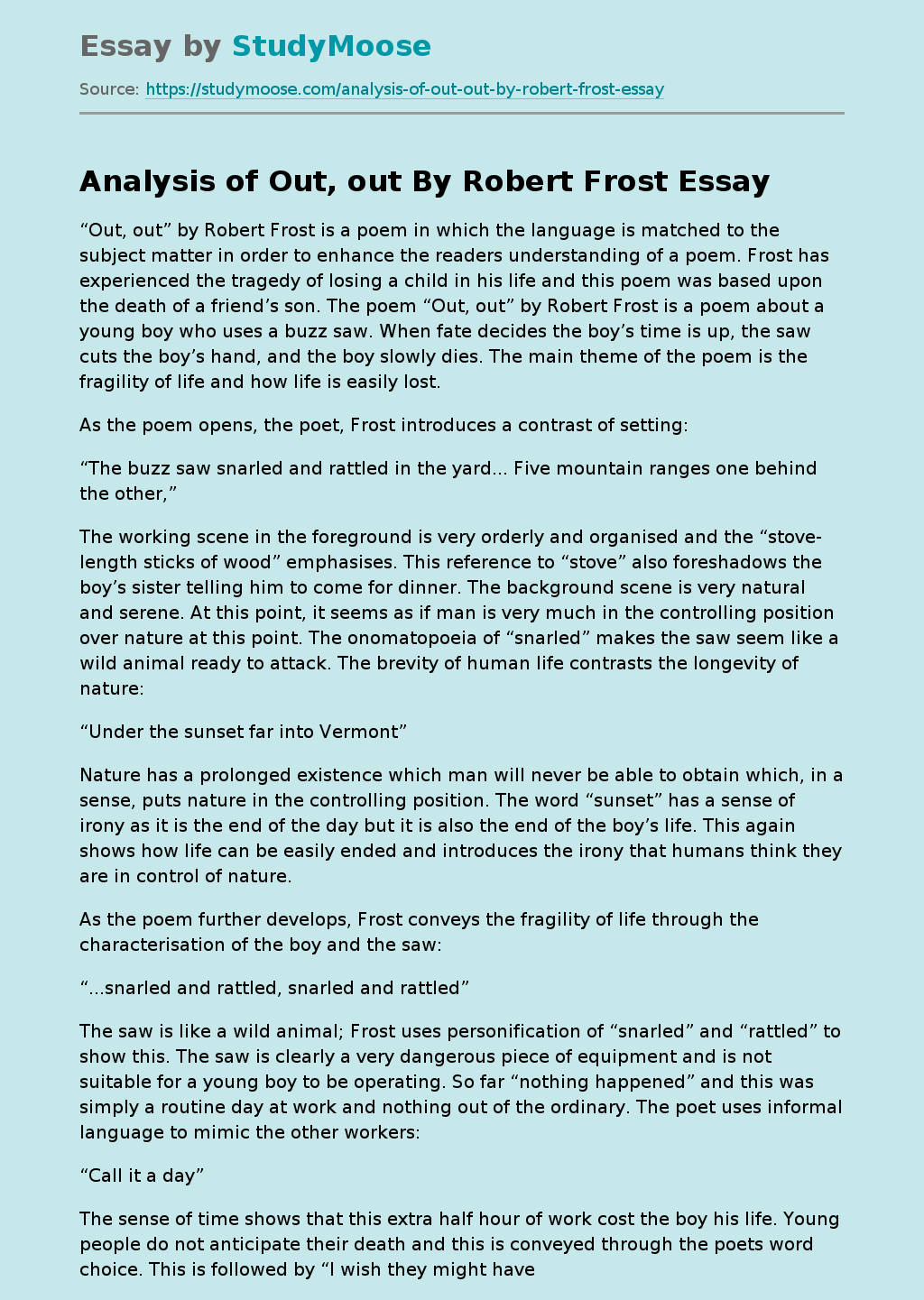