Robert Frost Poetry Out, Out and Readers Sympathies

The title of the poem alludes to Macbeth’s last soliloquy, in Act V of “Macbeth”. He has just found out that his wife is dead, and his speech includes the metaphor “out, out, brief candle”. The metaphor implies that life is short, it is only the lighting of a candle, and can be ended easily, even by just a draft of wind. Frost’s poem explores this fragility of life, how it can be over so quickly, before it has even begun.

Don't use plagiarized sources. Get your custom essay on
“ Robert Frost Poetry Out, Out and Readers Sympathies ”
Get custom paper
NEW! smart matching with writer

By doing this, he evokes sympathies in the reader for the boy, and the shortness of his life.

At the beginning of the poem, Frost presents us with a naturalistic observation of the setting, creating a calm and peaceful feeling. He describes the wood as “sweet-scented stuff”, the sibilance could reflect the gentle sound of the breeze. This makes the events of the poem more shocking to the reader, as it started with pretty images of rural America, and then leads to the death of an innocent boy.

Although the sibilance could be seen as a more disturbing sound, like a serpent hissing, which is more ominous and warns the reader that something bad will happen. This might create sympathy for the boy and his family, as he was in a seemingly calm and relatively safe environment, and so his death was unexpected.

However, the first line contradicts this safe feeling, “the buzz saw snarled and rattled in the yard”. “Snarled and rattled” sound actively aggressive, which makes the boy seem little and some what helpless in comparison, which creates sympathy for him.

The onomatopoeic sounds, and the repetition of “ed” give it a mechanical sound. Furthermore, the harsh “d” sound is repeated in the next line, “dust and dropped”, which gives it an unyielding quality, like the machine keeps working, it doesn’t stop for anyone. Therefore the reader pities the boy here, as he cannot contend with such an unyielding machine. The alliteration could also represent the wood dropping as he is cutting it, an image of life dropping to the floor, which could reflect the boys life falling down around him.

Not only is the buzz saw presented as an aggressive machine, Frost also likens it to an animal, it “leaped out at the boy’s hand”. “Leaped” sounds like a predatory animal leaping to catch prey, it hunts down the boy’s hand. Or, more disturbingly, animals are trained to leap by masters, and in this way it sounds like it has been trained or told to do it, which could suggest a higher power wanted to kill the boy. Either way, Frost intimates that the boy has no choice, the ‘animal’ just leaped at his hand. In doing this, Frost makes the read feel sorry for the helpless boy, as he had no choice, he couldn’t have done anything to stop it. As well as this, the choice of verb sounds almost joyous, “leaping” is something you would do if you are happy or excited. This is ironic, considering that it is leaping to chop off his hand.

All of this happens so quickly, the leaping out only takes a second, which suggests that human life is very fragile, and can be destroyed in a moment. This fragility is evident in the line “little – less – nothing!”, it is like he is drifting further away with every word. The structure of the sentence physically separates the words, and could give the impression of his heart beat, where every word is one beat. Also, the way it is stated so simply could reflect the simplicity of life, one moment you are chopping wood, the next there is “nothing!”. The exclamation mark at the end emphasises that it is over, he has died. It could also express that the poet thinks the situation is ridiculousness, that a boy died from chopping wood. The reader pities him, not only because his life ended so fast and so simply, but he was just doing an everyday job when it did.

The boy recognises that his life is fragile, when he holds up his hand “as if to keep the life from spilling out”. This suggests that life is a delicate balance, if it isn’t contained and carefully balanced, it will spill out over the top and you will lose it. The “as if” suggests that it is not a conscious effort, he is just holding up his arm. Perhaps this suggests that he knows he has already lost too much blood, and that he is going to die, which would explain why he doesn’t do more to save himself. If this is true, the reader would sympathise with him, as he knows he will die, and that is a very sorrowful position to be in.

Perhaps equally as sad is the fact that no one really mourns for him. As soon as he is pronounced dead,

Were not the ones dead, turned to their affairs.”

Frost was very courageous with this last line, he doesn’t play the easy card, he shocks the reader. He is saying that we all have to move on, and people didn’t have time to mourn for their children. “Turned” sounds particularly cruel, it is like they are ‘turning away from him’, and refocusing their attention on other things. It is all very ‘matter of fact’ and the tone is very detached. This all adds to the reader’s sympathy for the boy; no one truly cared for him enough to show grief and sorrow at his death, which is a sorrowful thought itself. The reader may also feel sorry for the family, and their lack of ability to show grief.

On top of this, and possibly the most regretful part is that it appears the boy never really had a proper childhood:

“To please the boy by giving him the half hour

That a boy counts so much when saved from work”

The idea that he need to be “saved” is troubling, the reader gets an image of a powerless boy being put to work by controlling adults. Frost only asks for half an hour for him, a small reward, and the fact that he’d count it so much implies that he doesn’t get much free time to be a child. It suggests that he works long hours everyday, which the reader would sympathise with him for anyway. But put on top of that his death at such a young age, and it would have been all he’d known, makes a devastating idea, one that the reader would feel greatly sorry for him for.

His premature death is symbolised in the line, “No more to build on there.” It suggest that the boy was only the foundations, he had the building of a life to come. This makes his death even more tragic, as he was only at the start of life.

Overall, the poem explores the fragility of human life. Furthermore, it doesn’t use any names, implying that the situation is universal, and can apply to anyone. Perhaps this allows the reader to feel more empathy, as they can apply the situation to their own lives, as the boy is just a boy, he has no name. Also, whilst there may be some sympathy for the family, in the fact that they lost a child/brother, I think Frost tries to divert the attention/sympathy away from them, particularly in the last line.

Robert Frost Poetry Out, Out and Readers Sympathies. (2020, Jun 01). Retrieved from https://studymoose.com/robert-frost-poetry-out-out-and-readers-sympathies-essay 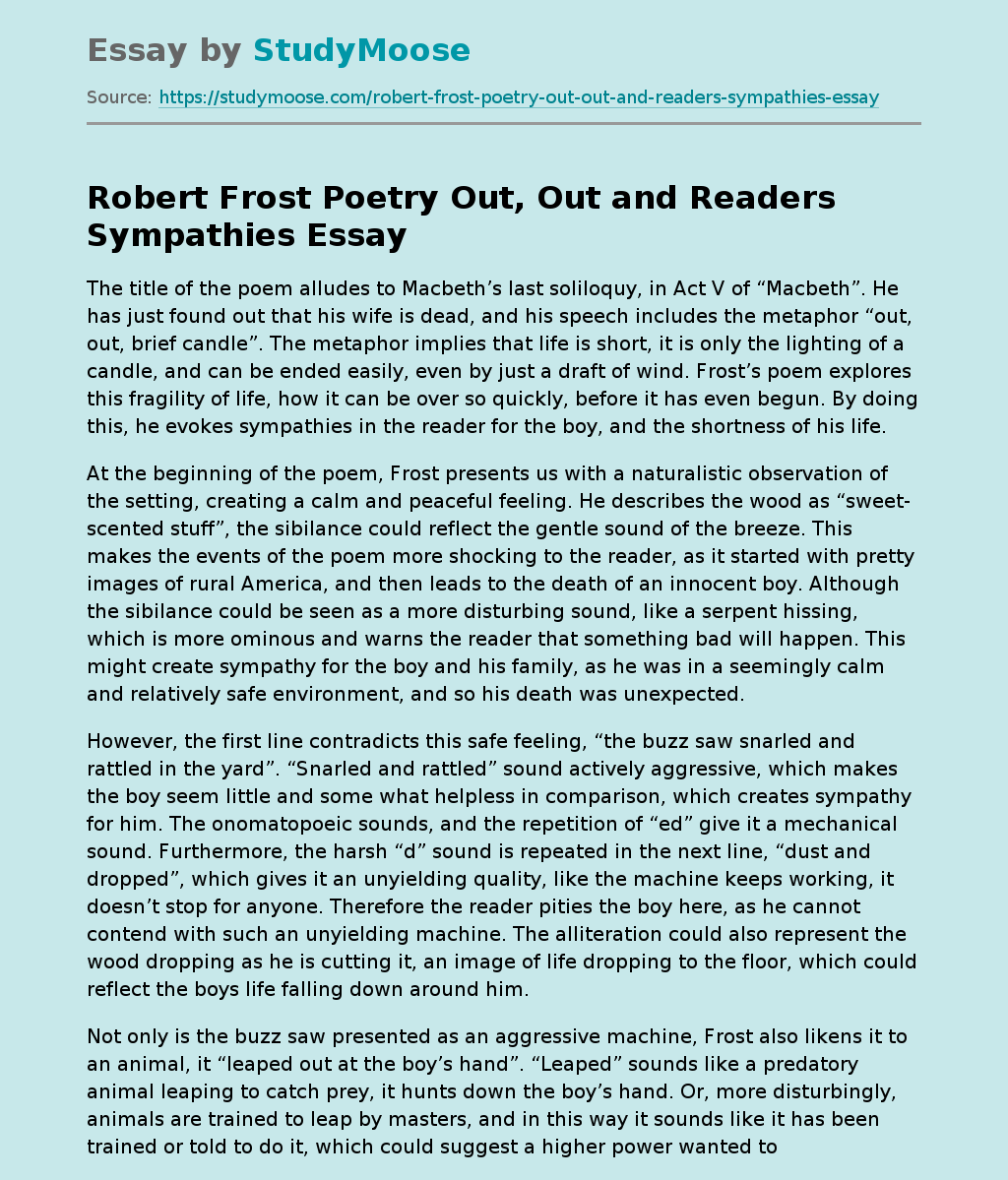