The War of 1812 and the Mexican-American War

The War of 1812, The US saw Great Britain as a major problem because of their definition of “contraband” and the impressment of American sailors into the British Navy. And around this time the “warhawks” are elected to the House of Representatives.

Don't use plagiarized sources. Get your custom essay on
“ The War of 1812 and the Mexican-American War ”
Get custom paper
NEW! smart matching with writer

They wanted war because the British were supplying the Indian with guns and ammunition and encouraging Indian trouble.

William Henry Harrison is sent west to face off against Indian warchief, Tecumseh at the Battle of Tippecanoe. After the fight the Americans find British weapons with the fallen Indians. The Warhawks are convinced that we can capture Canada, which they wanted for its fish, furs, land, and lumber. Warhawk Henry Clay is elected Speaker of the House, and appoints warhawks to the house committee on Foreign Relations.

The Mexican American War was partly began by the president and Mexico together. Polk wins the Election of 1944, and Tyler annexes Texas on March 2, 1845.

We aren’t sure on the southern boundary of Texas. Mexico claims it’s the Nueces River while the US say it’s the Rio Grande. On top of this the US wants a war with Mexico with the hope of forcing Mexico to hand over California. Polk sends an army commanded by General Zachary Taylor into the disputed territory.

So both of these wars are started with the expansion of the United States’ boarders as a main idea. The Warhawks want Canada and Polk wants California, both for reasons of commerce.

Mexico sends its own army and camps out on the opposite side of the river from Taylor’s men. On April 25, 1846 the Mexican army crosses the Rio Grande and attack’s Taylor’s army. When Polk hears of this he immediately goes to congress and asks to declare war. His reasons: The Americans have been attacked on American soil. Congress declares war.

Madison’s reason’s for war on Great Britain in 1812: Impressment of US Sailors into the British Navy, and the seizure of non-contraband cargo off American trade vessels. The house passes the declaration 79 – 49, while the Senate passes it 19 – 13. They declare war on June 18, 1812, without knowing that Britain repealed the Orders of Council on June 16, 1812.

The Americans being attacked on American soil can be counted as a similarity because the Chesapeake/Leopard Affair happened in US Territorial waters and so did this first attack in the Mexican American War.

I also think that the in 1812 the US was a little more prepared for war then they were at the start of the Mexican American war. The Mexican American War is a good deal more popular in the south than in the north because the south look at the war as a chance to defeat Mexico and gain land to grow more cotton. So the southern states send a lot more men than the north does.

And the same with all wars way back when, more men died of infection and disease than on the battlefield. Dysentery was one of the big illnesses during the Mexican American war.

The US defeats Britain several times and wins control of Lake Eerie. US makes attempts to capture Canada but fails every time because the US Generals were Veterans of the American Revolution and most were incompetent, state militias, especially New York, never left the state to fight. Early in the war the US captures Toronto and burns Canadian Parliament to the ground, which we pay for later on in the war; however, we don’t have enough forces to hold Toronto so we withdraw. At Lake Champlain, British are defeated in a naval battle at the Battle of Lake Champlain. Us Commander Thomas McDonough rigs his ships with 2 anchors enabling them to fire nonstop without pivoting, he drives the British back to Canada.

First Campaign led by General Zachary Taylor, his army moves south across the Rio Grande, winning ever battle, and by the end of 1846 controls northern Mexico. General Stephan Kearney and a force of 1700 men were ordered to capture the relatively unpopulated provinces of New Mexico and California. He captures Santa Fe without a fight, the capital of the province of New Mexico. He joins up with rebelling Americans under the command of John C Fremont and by February 1847 the US controls all of California.

On August 24, 1814 – British troops land in Maryland and attack Washington D.C. It is captured. The burn the White House and Capital Building. Next day a tornado hits D.C. British leave Washington because the spot isn’t strategic, the move and attack Baltimore; however, they are unsuccessful.

Polk feared Taylor’s increasing popularity so he told Taylor to remain in Northern Mexico until the entire area had surrendered. General Winfield Scott is appointed to capture Mexico City. Scott and 10,000 marines sail to Mexico, attack and capture Vera Cruz, and head on to Mexico City.

This time it is completely opposite, British capture our capital in the War of 1812 while we capture the Mexican Capital in the Mexican American War.
Both events are however similarly followed by peace negotiations.

In October 1847 Santa Ana is defeated and both sides wait for peace negotiations. Nicholas P Trist was sent with Winfield Scott to draft a peace treaty, but when he and Scott quarreled Polk ordered his return. Trist did not return, if he had returned all of Mexico might have been annexed into the US. Peace Treaty is signed by February 2, 1848. The treaty of Guadalupe-Hidalgo – 1848. The treaty had four terms. First, Mexico cedes the US California, New Mexico, Arizona, Utah, and Nevada. Second, The Rio Grande is set as the southern boundary of Texas. Third, The US agrees to pay Mexico 15 million dollars. Sometimes this money is referred to as “conscience money.” Finally, The US agreed to pay claims of American citizens against Mexico ($3.25 million)

Peace negotiations for the War of 1812 took place in Ghent, Belgium. It involved John Quincy Adams, Henry Clay, Albert Gallatin, Jonathan Russel, and James A Bayard. A treaty is written, which ended the war of 1812, it was signed December 24, 1814. The war is called a draw. Captured territory goes back to Status Quo Ante Bellum – The way things were before the war. Both nations get back all the land they possessed before the war began. Other questions would be negotiated by joint commissions. 5 weeks before news of the treaty reach the US the War of New Orleans is waged. 7500 British troops east of New Orleans move to capture the city and gain control of the Mississippi River. 6000 American troops await the British under the command of Colonel Andrew Jackson, whose men massacre the British. Casualties are British have 2100 dead or wounded, while the Americans have only 21 dead or wounded. This is the British’s worst defeat of the war. As a result of this battle American feel that they won the war, even though technically it was a draw.

Th biggest major difference in the two treaties was the dealing with land, in the Treaty of Ghent the land was all returned to its original owner. In the Treaty of Guadalupe-Hidalgo, they have huge amounts of land ceded to the US. There was also no dealings of money in the Treaty of Ghent. The Mexican American War eventually led to the Gadston Purchase and ultimately the fulfillment of Manifest Destiny. The War of 1812 eventually led to the Joint Occupation of America the Rush-Baggot Agreement, and the agreement of the 49th parallel from the lake of the woods to the rocky mountains as the northern border of the US. 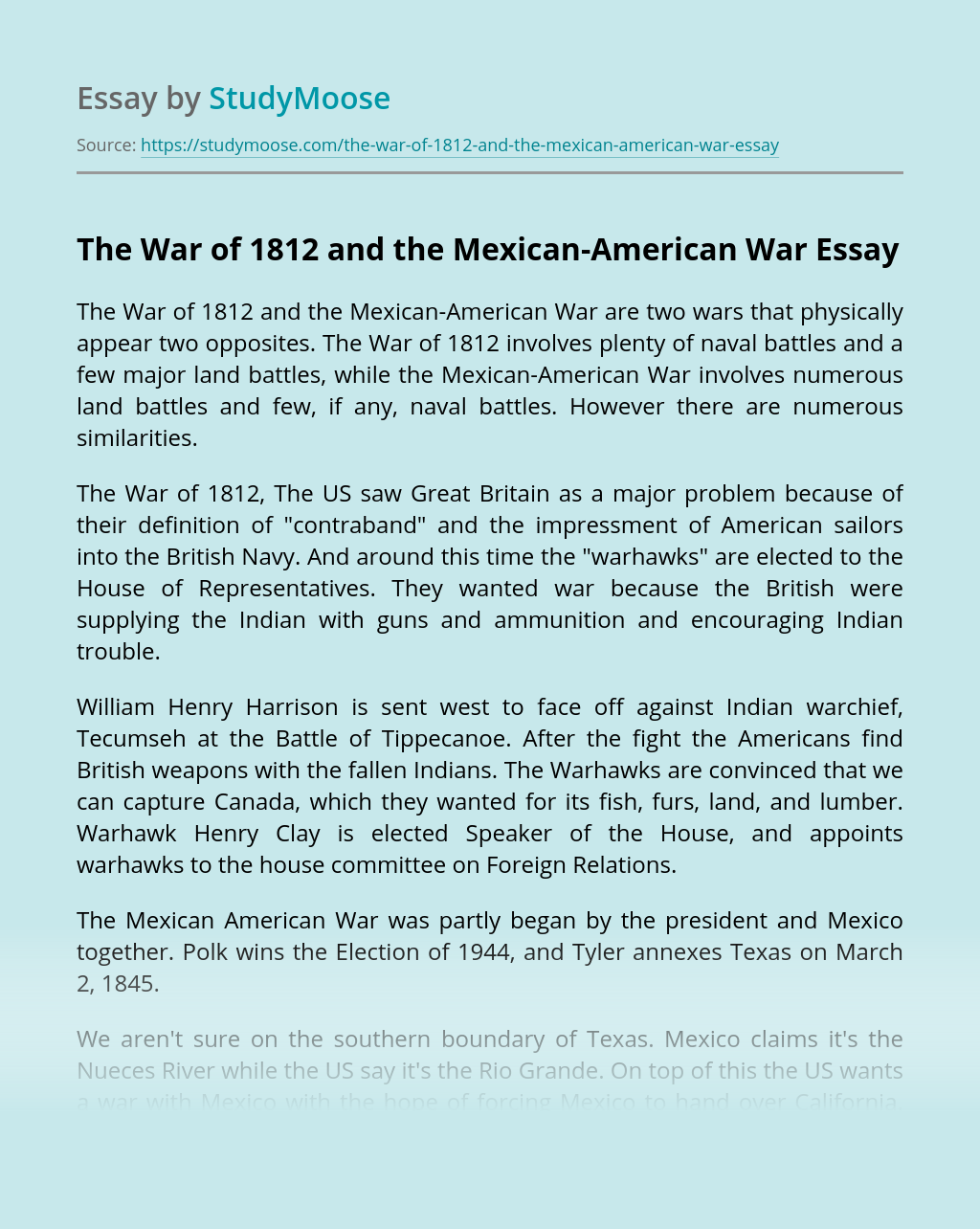