Rhetorical Analysis of "The Mexican-American and the Chruch" Speech

The impact of one single speech can essentially affect the entire world. Granted, there are different degrees of impact felt: those present at the speech, those who watched/heard the actual speech from somewhere else, those who heard some things about it from someone else, and so on and so forth. As the speaker’s message experiences a sort of ripple affect, it calms and becomes less and less dynamic. The main point, or gist, of the speech endures but potentially valuable details; those pertaining to the speaker himself, the location, the timing, current social, political, and economic climates, flake off.

Don't use plagiarized sources. Get your custom essay on
“ Rhetorical Analysis of “The Mexican-American and the Chruch” Speech ”
Get custom paper
NEW! smart matching with writer

Understanding the context is vital when one wishes to understand a speech. Therefore, using Cesar Chavez’s “The Mexican-American and the Church” speech from Sacramento, California on March 8, 1968, I will demonstrate my contextual analysis. THE 1960’S First off, I’d like to briefly describe the time in which the event took place with regards to American society and politics. The turbulent sixties varied greatly from the conservative fifties and, eventually, resulted in revolutionary ways of thinking and real change in the cultural fabric of American life.

National facets such as education, values, lifestyles, laws, and entertainment were all apart of the change. Many of the revolutionary ideas, which began in the sixties, are continuing to evolve today. (Lonestar College Library) The Civil Rights movements made great changes in society in the 1960’s. Black activists, such as Stokely Carmichael and Dr. Martin Luther King Junior lead sit-ins and peaceful protests as the philosophies of Malcolm X preached Marcus Garveyism, or Black Nationalism to African Americans.

Women’s rights activists like Betty Friedan, Pauli Murray and Gloria Steinem, contested the unequal treatment of women and began the Women’s Liberation movement. However, Women, along with African-Americans, were not the only national communities involved. American Indians, faced unemployment rates of 50% and a life expectancy two-thirds that of whites, and began to assert themselves in the courts and in violent protests. The number of Hispanic Americans tripled during the decade and became recognized as an oppressed minority.

Cesar Chavez organized Hispanics in the United Farm Workers Association. (Lonestar College Library) So, we can note that the diverse social setting in which Chavez gave this speech was turbulent, people were desperate for reform, and individuals like Dr. King, Friedan, and Chavez were the face and voice of cultural communities striving for change. WHO WAS CESAR CHAVEZ? The speaker, a second-generation American, Cesar Chavez was born on March 31, 1927, in Yuma, Arizona. His family lost their farm during the Great Depression, urging them to become migrant workers.

With an eighth-grade education, Chavez left school to work in the fields full-time to support his family. Despite his formal education ending, he still possessed an insatiable intellectual curiosity, and when he could, educated himself further. (ChavezFoundation. org) As a young and self-educated activist, Cesar wanted to create an organization to protect and serve farm workers. This desire stemmed from enduring the shared hardships of farming families like his. In 1962, he founded the National Farm Workers Association, which later became the United Farm Workers of America.

(UCLA) SPIRITUALITY Aside from all his political, social, and economic endeavors, Cesar Chavez was also a profoundly religious man. This aspect of his character is less publicized, but it played a central role in his building of a farm workers movement, as he believed that the religious community had a moral obligation to help migrant workers. Chavez had to persuade mass numbers of Catholics, as well as Protestants, who were one of the movement’s first allies. (UCLA) Chavez’s spiritual symbolism helped transform an economic justice campaign into a massive movement.

Young religious activists flocked to the UFW cause, and churches boosted support for the union’s nationwide grape boycott. Chavez always referred to his now legendary 1968 decision to refrain from eating to show the power of nonviolence as a “fast,” and not as a hunger strike. Chavez felt his movement was best communicated through universal religious/spiritual terms. (ChavezFoundation. org) It was during this spiritual fast that Chavez had prepared “The Mexican-American and the Church” speech delivered on March 8, 1968 at the Second Annual Mexican Conference in Sacramento, California.

(AmericanRhetoric. com) LOCATION The location of the speech, Sacramento was rather sacred ground (no pun intended) in terms of Chavez’s movement. The 1966 march that put Chavez on the national stage with the motto “Perigrinacion, Penitencia, and Revolucion”–“Pilgrimage, Penitence, and Revolution,” began in Delano during Lent and ended in Sacramento on Easter Sunday. Chavez mentions the small city of Delano in the speech as, where “the Church has been involved with the poor in a unique way that should stand as a symbol to other communities.

” Many of those involved in the 250-mile journey carried various religious artifacts. (UCLA) AUDIENCE At the Second Annual Mexican conference in Sacramento, Chavez delivered his speech to an audience primarily of Mexican-American migrant workers, farmers, students, religious activists, and local Church members. After reading this speech and familiarizing yourself with Chavez, you can assert that much of his tone and overall persona was impassionate and his message was well accepted by those present.

Feelings of cultural pride, purpose, and power were saturated in the speech and given the context; we can assume those same emotions spread throughout the direct and indirect audience. CONTEXT Amidst a turbulent decade chock-full of civil rights protest and reform, a Mexican-American migrant worker from Arizona became a national icon for Hispanics and laborers striving for equality in the workforce. Combining knowledge of migrant manual labor and the accompanying hardship with strong spiritual symbolism, Cesar Chavez motivated a nation through grassroots campaigning.

Rhetorical Analysis of "The Mexican-American and the Chruch" Speech. (2017, Jan 12). Retrieved from https://studymoose.com/rhetorical-analysis-of-the-mexican-american-and-the-chruch-speech-essay 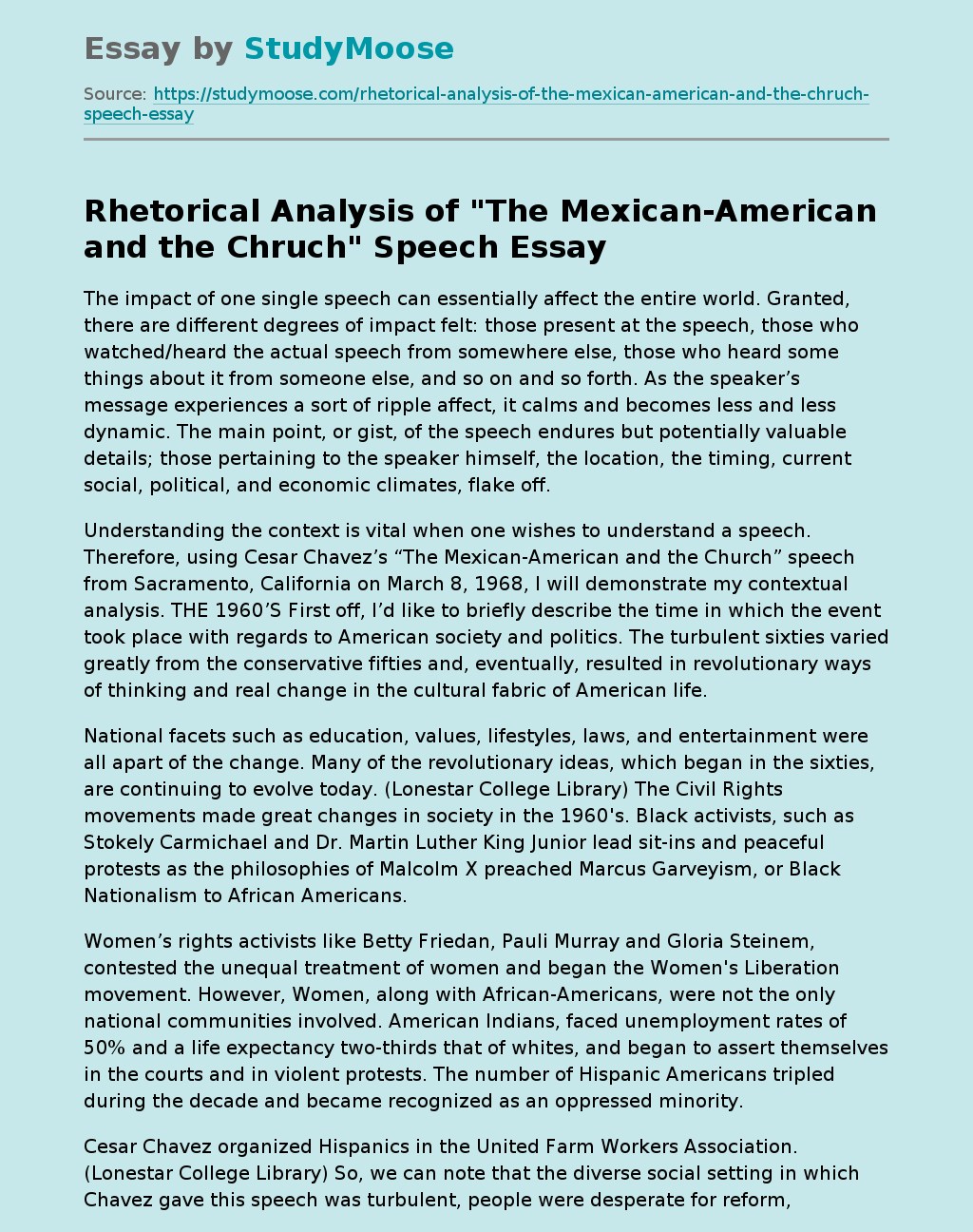