The concert that I chose to review was an online performance of Tchaikovsky’s “1812 Overture”. This overture is the finale to his Symphony No. 5. The piece that I chose was performed by the Berlin Philharmonic on October 9, 2008 and conducted by Seiji Ozawa. Ozawa has conducted orchestras in Germany, Austria, France and many other countries. He holds the distinction of being, “the first recipient of Japan’s Inouye Sho…recognizing lifetime achievement in the arts” (“Seiji Ozawa: Conductor). The “1812 Overture” has movements that have become famous and have been used in movies and on television, but the sections of it that have been used in these places don’t convey the whole feeling of the overture.

Don't use plagiarized sources. Get your custom essay on
“ Tchaikovsky’s “1812 Overture” ”
Get custom paper
NEW! smart matching with writer

The “1812 Overture” as a whole is a moving piece because it combines elements of music to uniquely convey emotion.

The overture begins adagio, with the strings playing in a very legato style. The notes are smoothly combined with a slight tremolo to them to evoke emotion.

The woodwinds enter next, with the flutes featured legato in accompaniment to the strings. Ozawa conducts with his whole body and his arms seem to move in the same way that he wants to listener to feel the music. The tone of the piece changes when the percussion enters espressivo and joins the wind instruments and the strings.

The piece begins to accelerate when the percussion instruments begin to play. An oboe solo contrasts with the percussion’s vibrato. The introduction of the percussion makes the whole orchestra play faster and more allegro.

As the brass and percussion instruments increase in speed and volume the entire orchestra plays forte and with force. At about four minutes into the overture as the overture becomes more and more allegro there is a section that echoes the drum section of the overture that has become so famous that will be played later. This opens up a section of grandioso style with all instruments playing forte and allegro, giving the overture an overall lively and quickly moving feeling.

There is an interlude that follows this quick movement of the overture. The strings are featured in this movement and the whole movement is played softer, more adagio and with several glissando sections from the stringed and wind instruments to calm the overture down. Here an oboist and flautist each perform a cavatina, a short solo that is part of the larger piece the orchestra is playing. Their solo parts echo the orchestra but also compliment it. From here the overture returns to a vivace tone and all sections play briskly, lively and fast. The timpani accompanies this fast pace with several forte, brisk notes. Ozawa moves the orchestra easily through the overture’s theme and the adagio sections seem to blend easily with the vivace movements and make the overture feel whole and vibrant.

There is a wind instrument section shortly after the timpani that leads into the forte, grande finale of the overture that has become so popular. This section features the flutes and clarinets playing a very fast and repetitive section. When I listened to this section I felt that the whole energy of the overture was accelerating. This was accompanied by timpani and percussion making the movement more forceful and forte. The overture continues to build and accelerate in volume and pace as it reaches its finale. As the strings speed up the brass section joins them to make the movement more forceful. The percussion joins in with bells that seem almost dissonant to the other instruments.

This feeling of semi-dissonance is because the other sections are all playing fast, repetitive fifth note tremolo progressions while the bells seem to be playing almost at random. The bells didn’t quite seem to fit with the rhythm of the other instruments at this point to me, but as the movement progressed towards the finale I understood how the bells fit in to the whole piece. The bells play in a similar tone as the other instruments, so even though they are playing in a completely different time signature they don’t seem completely out of place. I enjoyed watching the bells being played during this section also because the bells used are so large they were almost the size of the man playing them. This somehow made them seem even more powerful and forceful when they were being played. As the movement progresses it slows down briefly once more, becoming slightly more adagio but the bells don’t stop. The bells continue to play and act as a bridge to bring the other sections into the grande finale section.

In the final moments of the overture the percussion and brass sections seem to take over. The whole finale is played very grande, with all of the instrumental sections combining to give the overture a very big, encompassing feel. In the performance notes for a performance by the Burgess Hill Symphony Orchestra, Sonia Hill describes the overture as, “a festive and patriotic piece to immortalize Napoleon’s defeat and celebrate the liberation of the Russians” (Hill) and this final movement illustrates that inspiration. Ozawa’s body language changes during this final movement also, and he begins to move as quickly and forcefully as he wants the orchestra to play. If the other instrumental sections were not playing as forte as they are, the percussion section would probably drown them out.

The end is punctuated by many staccato sections from the brass instruments that echo the forte notes by the percussion section. This is then contrasted right afterwards by longer, smoother notes from the woodwind section. The reason the end of the overture is so memorable and powerful is because of that contrast between the forte percussion playing huge, booming notes, the brass playing staccato and vivace, and the wind sections providing tremolo sections that accompany them.

The final moments and notes of the finale feature rolling sequences by the timpani. These rolls seem to signal that the overture is ending, but they also contribute to the grande tone that is meant to leave a lasting impression on the listener. The pace of the orchestra slows down from the frantic pace a few seconds ago and here the strings play forte but smoothly, bringing all the sections of the orchestra together and also signalling the end of the overture. The overture ends with each listener remembering the power of that final movement. 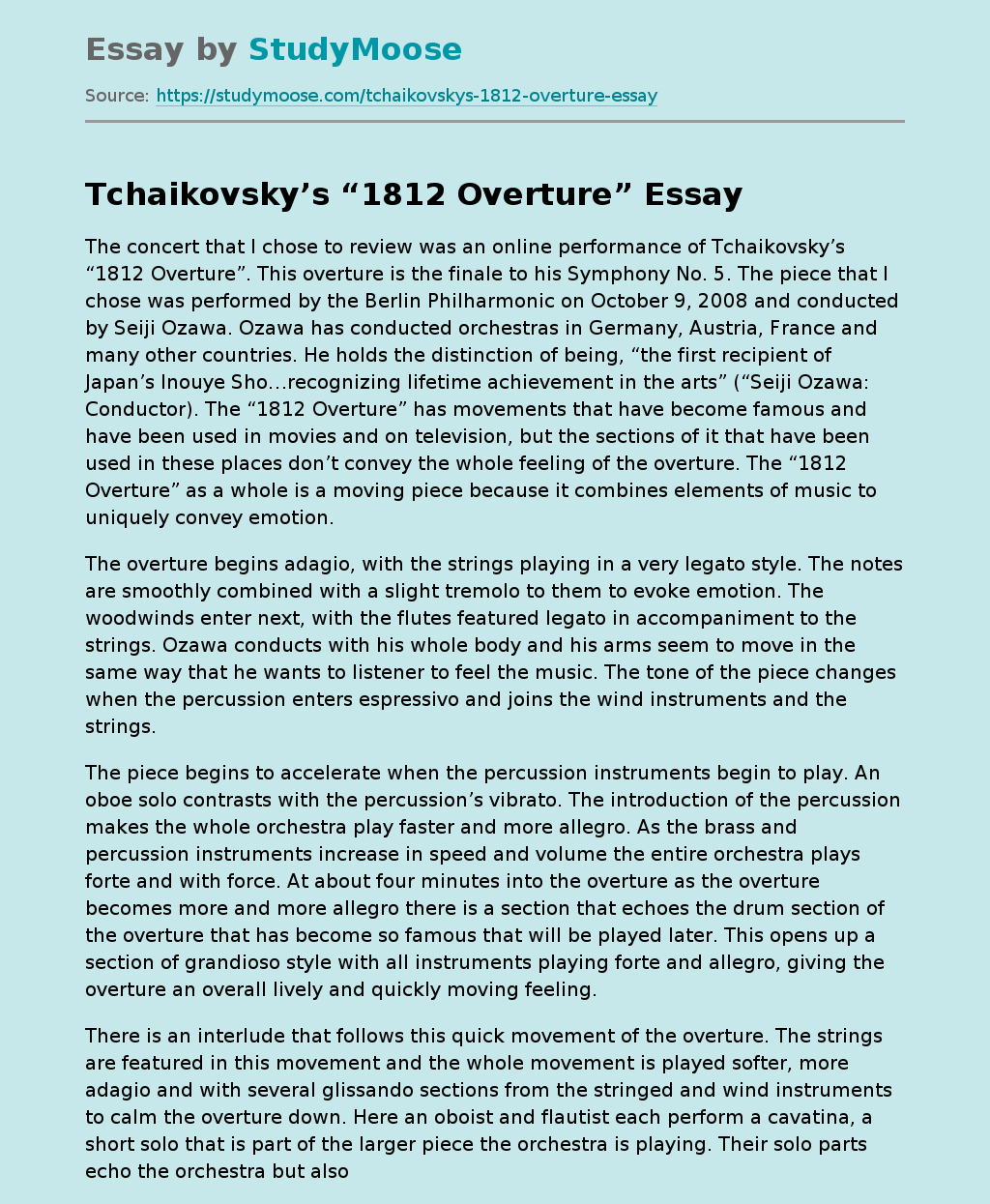