Pat Mora is an award-winning writer that bases most her poems on tough cultural challenges and life as a Mexican American. She was born in a Spanish speaking home in El Paso, Texas. Mora is proud to be a Hispanic writer and demonstrates how being culturally different in America is not easy. She explains this through her experiences and the experience other’s. In her poems “Elena”, “Sonrisas”, and “Fences”, Mora gives you a glimpse of what life as a Mexican American is; their hardships, trials, strength that make them who they are.

Don't use plagiarized sources. Get your custom essay on
“ Mexican Culture in Poetry of Pat Mora ”
Get custom paper
NEW! smart matching with writer

In the poem Elena, Mora describes a woman who is dealing with the hardships of being a Spanish speaker in an English dominant country. The structure of the poem tells three stories: the way life was in Mexico, how Elena’s feels the language barrier between her children is effecting her relationship with them, and the challenges she faces in trying to educate herself in the English language.

Mora takes you deep into a mind of a woman who is not only facing challenges in the outside world but in her home life as well.

In the stanza one Mora writes about the internal struggle of Elena, a woman who only knows how to speak in her home language, Spanish. When you read the line “My Spanish isn’t enough. ” (LI. 1), it shows that Elena feels this heavy weight on her shoulders; her knowledge of only one language isn’t enough. She looks to the past and remembers being able to enjoy listening and understanding her children.

Then the Elena gets pulled back into reality and remembers that the memories of being able to understand her children are left behind in Mexico, they live in America now. She sees how coming to America has affected her relationship with her children because of the language barrier they now face. Mora’s description of Elena give you an incite to what most non-English speakers must feel coming to an English dominant country. In second stanza Mora describes Elena’s home life, when her children are home, and the struggle she faces trying to learn the English language.

She feels ignorant in her own home because she cannot share in her children’s laughter and conversation. To try and get closer to them she buys a book to learn English but only gets ridiculed by her closed-minded husband who disapproves of her knowing anything that he doesn’t. She feels judged on her knowledge of the English language, by not only the outside world, but her family as well. Elena feels overwhelmed but knows that she needs to keep going. When Mora writes, “…if I stop trying, I will be deaf/when my children need my help. ”(LI. 1-22), she is metaphorically showing how Elena feels “deaf”, when she cannot understand what her children are saying. Mora uses “Elena” to demonstrate the hardships and cultural battle non-English speaking Americans face while raising their children.

They feel they have to compete with American customs in order to have a relationship with them. Mora gives the reader plenty of visuals and symbolic meanings that let you see into the mind of Elena and her journey on learning English. The poem “Sonrisas”, meaning smiles, tells about the many smiles that people wear in their daily lives.

Mora gives two parts of this poem that explain the cultural differences in Mexican American’s work life and home life. It gives an insight on how Mexican customs differ with American customs, and how these individuals adjust to living two separate lives while trying to hold on to their culture. Mora writes “I live in a doorway/ between two rooms” (LI. 1-2), this symbolizes how the writer feels that looking into her own life, she feels as though she is in the middle of two different worlds.

In one room she hears “quiet clicks” (LI. ) and sees “cups of black coffee” (LI. 3), that gives you a visual of workers tapping away on their keyboards with coffee in hand to get through the day. She introduces the working class individual who wears, beige suites that match their beige smiles. The first few lines of the poem are very structured and conservative compared to the second part. Mora shows that the American customs in the workplace are very reserved and straightforward. She implies there isn’t any room for a bright, vibrant culture like the one that is introduced in the second part of the poem.

The second “room” Mora describes, gives you an image of women sitting around a table wearing their smiles while embracing their Mexican Culture. In the second world Mexican American’s are allowed to be loud and charismatic. Instead of the sounds of clicks and the sight of painted smiles, Mora shows a world where Mexican American’s are free to speak out loud and feel at home with each other though laughter and conversation. Their smiles share a story, and show pride of who they are and where their from. The second part of her poem shows how bright the Mexican culture stands out though its language and customs.

Mora’s poem “Sonrisas” is a vision of how Mexican American’s are accustomed to two very different cultures. The way the poem is structured shows how enormously different each world is. In one room it shows American Customs she follows in her work life and in the other room it shows her Mexican customs through her home and family life. For her looking into both rooms is like looking at two people with the same face and same smile but having live two different lives. “Fences” is about a Mexican family that works at a hotel near the beach where they see tourist come and go.

In this poem Mora describes the working class Mexican that serves the carefree wealthy American tourists, “…the turistas come…/ with suitcases full of dollars” (LI. 2-3). Like “Elena” and Sonrisas”, “Fences” shows how Mexican American’s feel that there is no room for a cultural clash in melting pot America. Right away Mora implies that she feels there’s a hidden barrier between the servant and the tourist hence the title “Fences”. This is brought up in the second stanza when she writes about her brother who levels the beach everyday to make it look as good as new for the tourist.

The line “to make the beach new for them” implies the beach is only for those who are affluent. Mora talks about watching mothers and their children indulge in luxuries she knows she will never be able to obtain. The cactus fence that is mentioned symbolizes how she can only watch the other side but never dare to cross it. When her sister decides to take that risk she is immediately put back in her place. Mora give a visual image of her sister running across the beach as free as a bird just to get a “taste” of what the other side had. “No. No. It’s their beach. / Its their beach” (LI. 8-19), yelled her mother.

Mora describes the feelings and emotions of many Mexican workers who come to America just to work and feel that they do not have a right to indulge in luxuries for themselves. Most feel like their place is to work and that’s all they can see for their children’s future as well. The last part of the poem speaks volumes when the mother yells to her daughter “Its their beach” meaning that they have no business trying to be someone they aren’t. Pat Mora the award winning Mexican American writer, writes about hardships and trials Mexican Americans face in their daily lives.

Her poems are about her own experiences or about the experiences of other Mexican Americans. The poem’s “Elena”, “Sonrisas”, and “Fences” all give you incite of how the Mexican culture clashes with American customs. Mora shows you the battle that a mother has to keep up with her children, the conflictions and understanding of living two different lives and still keeping your cultural background, and the life of a Mexican worker who doesn’t feel worthy of the luxuries that America has to offer. These individuals have to go through hardship and trials, which makes their culture strong, and thrive within them. 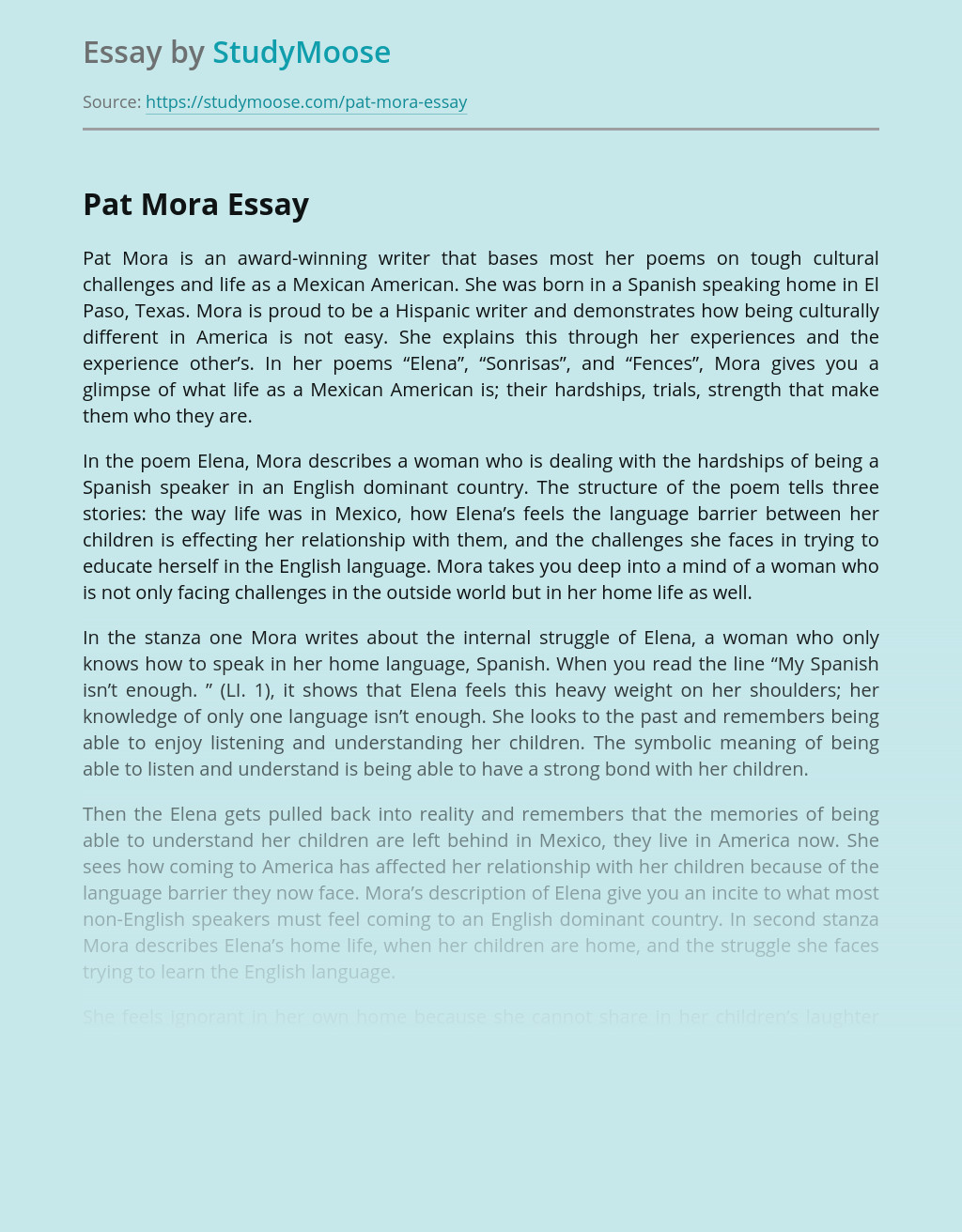