What techniques does the author of a prescribed text use to position the reader to sympathise with a character, even when that character is flawed?

When studying a novel, the reader can often share the feelings of a character and feel compassionate towards them, even when there are imperfections in that character. Pat Barker, the author of “Border Crossing” uses several techniques in her novel to arouse this compassion for one of the main characters, Danny Miller, who at the age of ten committed murder.

Don't use plagiarized sources. Get your custom essay on
“ Text response to Border Crossing by Pat Barker ”
Get custom paper
NEW! smart matching with writer

The reader experiences confusion in this sympathy because this character is immoral and did something that the reader knows is wrong. In this psychological drama, Barker invites the reader to explore the strange parallel between good and evil, and dive into the very core of human behaviour. Barker questions the truth behind morality and whether human behaviour is fate or a disturbing kind of evil. Barker’s dialogue, characterisation, narrative perspective, and character parallel techniques encourage the reader to sympathise with this “evil” character.

In a series of psychological interviews Barker uses the dialogue of her two characters Danny and the psychologist Tom to help the reader feel for Danny as he describes his grim and alarming childhood. Danny describes his years before the murder, living on a farm with his mother and father. He describes his father as “…a violent bastard…” and he says that he “…hated…” his mother for being depressed and miserable all the time. Danny was also physically abused by both of them, but mainly his father.

He defends his father even through this, by saying “He was misguided, but he did honestly think he was doing the right thing.” The reader sees that Danny is clearly a victim of trapped circumstance, and the question of who to blame for his shocking behaviour starts to brew inside the reader.

Barker not only includes the words that are said through these interviews, but the body language and pauses throughout, making the reader realise the sensitive topics, and the tone of the interviews. Tom comments that after one of the interviews that Danny “… looked drained.” Tom realises that this is hard for Danny and the reader knows that, because abuse is a confronting and horrible experience for a child to go through. The reader can think of Danny’s background as a possible excuse for his choice in murdering later in his life and questions to what extent can children be responsible for their actions. These interview techniques provoke understanding and empathy for Danny as we realise that although he has done something truly evil, the background of this character remains important, and causes the reader to feel a deep and baffled sympathy.

Characterisation is an important aspect of “Border Crossing” as the reader is often and hesitantly shown the character of Danny in an innocent and attractive light. Barker often uses her character, Tom Seymour, who was Danny’s psychologist in his trial and now conducts the interviews with him, to portray Danny’s character to the reader. Tom thinks that “That [Danny’s] smile… was enough to make an atheist believe in damnation.” which shows the reader how charming Danny is and how his physical appearance can be certainly very persuasive.

Another minor character, Bernard Greene who is the Principal at Long Garth, explains to Tom how Danny “…was one of the brightest boys I’ve ever taught…” and says “…he was rewarding.” The reader is drawn into this charm, and then the reader again questions the blame on which this murder falls upon. Danny is shown to the reader as a perfectly normal, attractive man, which makes the reader question whether it was just fate that Danny committed such a terrible crime, or whether he is truly evil. This characterisation certainly shows to the reader that Danny doesn’t seem evil, but a victim of a cruel twist of fate and therefore the reader is positioned to feel sympathy towards this character.

Barker’s use of narrative perspective gives the reader a greater grasp of Danny’s captivating character, and persuades the reader feel even more drawn to him. Danny and Tom’s interviews are very complex and intense, and although the novel is written in third person, the majority of it is from Tom’s perspective. Danny is therefore as unfathomable to Tom as he is to the reader. The reader is never sure if Danny is telling the truth, as his motives for even meeting with Tom are ambiguous. It was Tom who convinced the jury that Danny should be tried in an adult court and Danny even admits to Tom that he felt “betrayed”.

Because Danny is such an exceptional character, Tom almost becomes the “bad guy” and the blame for at least Danny going to jail is put on him. Danny’s lawyer in the case comments to Tom saying “They [the jury] believed him…they didn’t believe he’d done it. I didn’t believe it, and I knew he had.” Tom completely changed what everyone thought of Danny and feels in some way responsible, although he rather wouldn’t, for Danny landing in jail.

Now, Tom is torn between this guilt-fuelled empathy for Danny and “the clinician’s splinter of ice in the heart.” Consequently the reader reciprocates this empathy that Tom feels, because the novel is mainly written from Tom’s perspective and from his inner thoughts. Astonishingly, through this Danny again becomes the victim. This narrative perspective puts the reader in Tom’s shoes and shows us the sympathy that the reader “needs” to show Danny. The reader reciprocates Tom’s guilt, and feels they owe Danny sympathy. This is a very powerful tool Barker uses to make Danny seem like the victim and Tom the horrible person for putting such a nice boy into jail, and generate the sympathy that is required in this situation.

Another key technique Barker uses in “Border Crossing” to generate sympathy for Danny is the parallel between the antagonist; Danny and the protagonist; Tom. About a quarter of the way through the novel, Tom has a flashback to his childhood, where he was at a pond and his friend and him were playing a “cruel joke” on a boy a few years younger than them. Tom remembers that they filled his boots with frog spawn and threw stones at this little boy who was hysterical because of the revolting feeling of the spawn and felt trapped deep in the pond. Tom uses the word “because” six times in a paragraph, trying to excuse his behaviour for that incident.

Tom comments that he “was frightened” and that “three children were saved that day” meaning that not only the little boy, but Tom and his friend were saved from losing their childhood too. If the boy had died from this, Tom may have been in the position Danny is in now, which is where Barker draws the parallel. Tom says that “it was his good fortune not to know [what would’ve happened in the worse case scenario]” meaning that Tom knows it was up to fate to decide whether he had turned out to be “evil” or not. At the end of the flashback, Tom comments that this story “was something to be borne in mind… when talking to Danny” which is the major hint Barker uses to draw the parallels between Tom and Danny’s stories. Tom and Danny were both frightened, but Barker suggests it was fate which chose who was evil and who wasn’t.

This parallel between the protagonist and the antagonist make the antagonist seem not so bad. Barker persuades the reader to feel sorry for Danny, because the murder he committed was just a cruel twist of fate, according to her. She draws this parallel to show the reader that fate plays a huge role in whether a person is wicked, or has just done an evil deed. Both Tom and Danny’s actions were immoral, but Danny is shown as the “evil” one throughout the novel. This provokes more sympathy for Danny, as Barker suggests that he is only a victim of a horrible fate, and that he is not an immoral person.

Pat Barker in “Border Crossing” uses her dialogue, characterisation, narrative perspective and character parallel techniques to encourage the reader to feel sympathy towards the character Danny, even after committing murder. The novel does not allow the reader to understand him but enables the reader to see him more clearly, and to empathize with him. Barker truly questions the “evil” in which Danny has done, and whether it was up to fate or other influences to decide this, or whether Danny is a wicked person. Barker certainly generates a lot of sympathy for Danny using her techniques, even after he has done wrong. The reader feels sorry for Danny, because, as suggested throughout the novel, Danny is a victim of a cruel twist of fate, and is not in-fact evil. 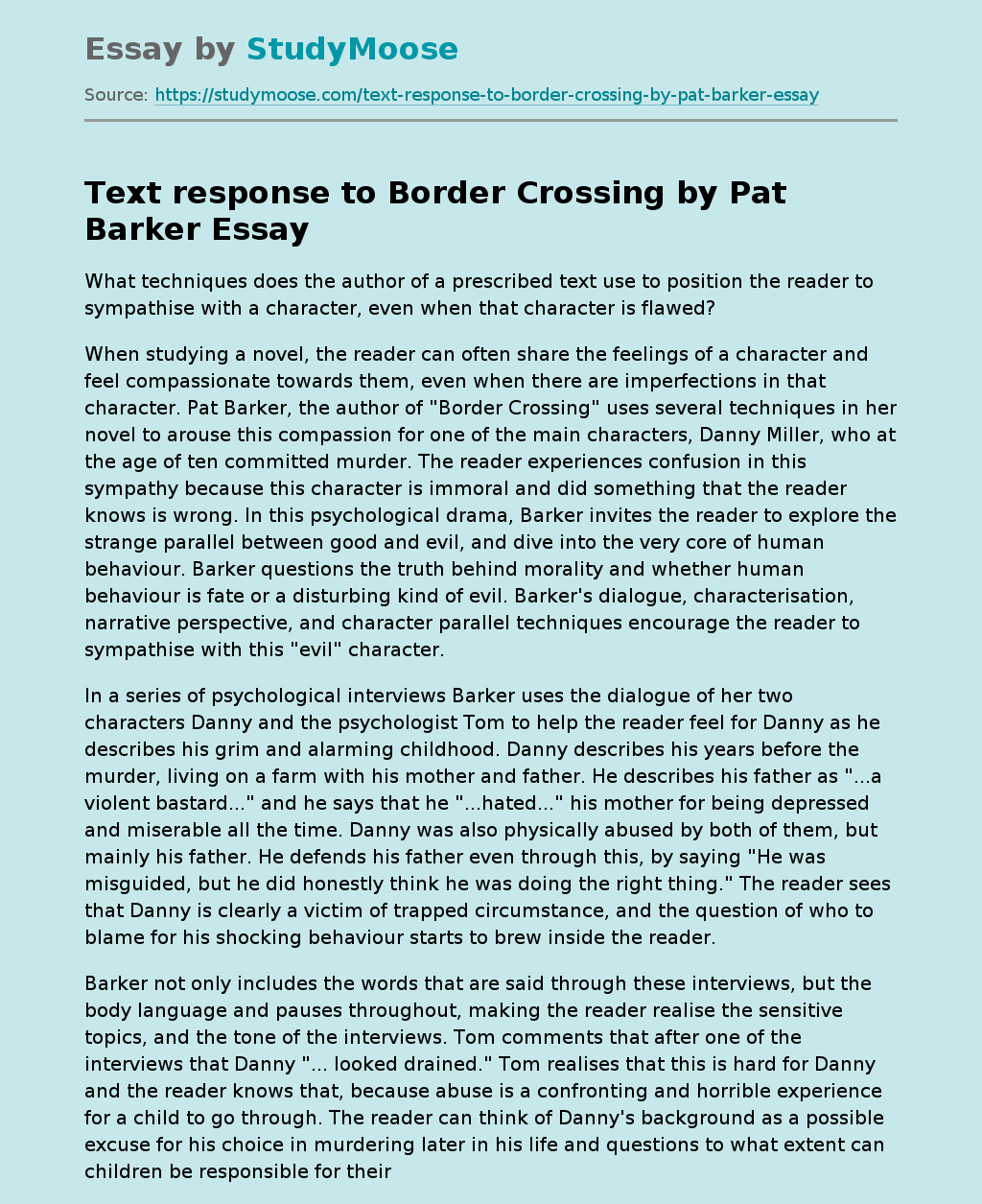