Hamlet’s and Laertes’ Revenge: Which One Seems More Justified

When one does an intentional (or even unintentional) act to the detriment of another, the aggrieved party or his or her loved ones may vow for vengeance against the perpetrator of the act. It has always been the kind of emotion that causes a person to feel hatred, show hostility, and display aggressive behavior, revealing the worst of him or her. Revenge can sometimes be bitter and relentless, but some people also call it sweet and fulfilling at times. Thus, it has been a common theme and concept in literature.

Turn in your highest-quality paper
Get a qualified writer to help you with
“ Hamlet’s and Laertes’ Revenge: Which One Seems More Justified ”
Get high-quality paper
NEW! AI matching with writers

The world of literature has been flooded with numerous tales about revenge and its consequences.

Although most of these stories are tragic and melodramatic, they have nonetheless created a remarkable impact on the readers’ consciousness about the reality and nature of revenge. Shakespeare has been proven by history itself to be a one-of-a-kind literary artist who was able to launch and create many successful tragic plays about revenge. One of his most popular plays about this emotion is that of the life of Hamlet, the prince of Denmark.

In this play, Hamlet found several reasons to kill and to make a lot of people suffer due to the death of his beloved father who was mercilessly murdered.

However, in the play, there is another character who had the same reason to of taking revenge — Laertes, whose father was killed by Prince Hamlet himself, and whose sister killed herself because of the sorrow brought by their father’s death. Considering Hamlet’s and Laertes’ vow for vengeance, it can be inferred that although they both share the same reason for being revengeful, only Hamlet’s revenge appears to be justifiable in the sense that he knew the truth behind his father’s death, whereas Laertes was blinded by Claudius’ lies and took revenge upon the wrong person.

The cause of death of Prince Hamlet’s father was actually unknown to the entire kingdom. After his father’s death, his uncle Claudius married his mother and took over the throne. It was only when the spirit of his father appeared in front of them when the real reason of his death was unfolded. The ghost revealed that it was actually the ambitious Claudius himself, the brother of Hamlet’s father, who killed him in order to put the entire kingdom as well as his wife in his possession.

Angered by the ill-fate of his father and the unforgivable, abusive, and unjust actions of his uncle Claudius, Hamlet vowed to take revenge on Claudius in order to give his father’s horrible death its due justice. The knowledge of his father’s murder and of his mother’s betrayal of her wedding vows with Hamlet’s father filled him with so much anger and vengeful spirit, as clearly reflected in the following lines:

Oh God! A beast that wants discourse of reason

Would have mourn’d longer – married with mine uncle,

My father’s brother; but no more like my father

Than I to Hercules. Within a month,

Ere yet the salt of most unrighteous tears

This was the start of his revenge. After this point, he almost went mad with all the thoughts that kept running inside his head. He was torn between morality and his revengeful feeling towards his uncle and those people who betrayed his deceased father. However, if one would look closely and analyze Hamlet’s revenge, although it may look relentless and heartless, it all boils down to the fact that Hamlet realized that his father, whom he loved so much, had been mercilessly killed for selfish reasons.

His anger as a son can completely be understandable since readers would be able to understand that a son’s love for his father will always be immeasurable. To think that Hamlet did all he could to be at the least careful of not punishing innocent people, it can be said that he never aimed to do worse things than avenging his father’s death.

Just like the reason behind Hamlet’s aggressive revenge, Laertes also lost two of his love ones. That is why, in a fit of rage, he fearlessly faced Hamlet whom he believed was the sole reason behind the loss of his family. His father, Polonius, was accidentally killed by Hamlet who mistakenly identified him as Claudius, while Opehlia, Laertes’ sister, died by drowning herself into a river due to the unbearable grief caused by his father’s death. Thus, just like Hamlet, Laertes was crushed by the incidents, and he felt the same kind of anger and pain just like what Hamlet felt.

However, recalling how Laertes got hostile towards Hamlet, it can be observed that Claudius made him believe that Hamlet was to blame for his father’s and sister’s deaths. Hence, brokenhearted at that time and naturally vulnerable and helpless in that condition, Laertes was easily convinced and moved by Claudius’ words. Thus, he started to feel that overwhelming anger and drive to kill Hamlet regardless of what ways or process he had to go through. The events which occurred next were a series conspiracies and plots that Laertes made in order to bring Hamlet down.

He also went to Claudius to seek help and advice as to how to kill his mortal enemy. His mind was then clouded by Claudius’ deceiving words which allowed evil to close Laertes’ heart to anything and made him a relentless and merciless enemy of Hamlet. He also succumbed to the evil plans of Claudius that were designed to kill Hamlet in the surest of ways. Although Hamlet succeeded in killing Laertes first, he was still wounded by the sword covered with poison which immediately cut his breath shortly after Laertes fell to the ground. Thus, it may seem that the driving force behind Laertes’ revenge was the deception of Claudius.

Unlike Hamlet, Laertes’ revengeful acts were pushed and encouraged by someone else’s motives and intentions which were that of Claudius. As it appears, while Hamlet decided on taking revenge on the people who brought upon his father’s death, Laertes, who went so weak to deception, was nothing but Claudius’ dummy who did just what the deceitful character wanted, without knowing the truth behind the deaths of his loved ones.

Upon exploring Hamlet’s and Laertes’ revenge, it appears clearly that both of them felt anguished and pained due to the death of their loved ones. The death of Hamlet’s dear father was so cruel and unjust that he himself felt that he should do what he can to make his father’s murderers pay for the crime that they committed. On the other hand, the reason behind Laertes’ revenge was merely fed by Claudius’s lies who wanted to eradicate Hamlet as his opponent from the kingdom.

It clearly implies that Laertes’ revenge was pushed through by deceitful and selfish reasons which covered his eyes from seeing the truth behind his family’s death. With this, it can be safe to say that Hamlet’s revenge is more justified in the sense that he knew the truth that his father has been murdered and therefore, justice must make the murderers pay for their crime, while in Laertes’ case, he had been so weak to deception that his anger and hostile treatment of Hamlet had no real and true basis. The tale which made him so angry had been fabricated by Claudius’ lies which made him fight for the wrong reasons and kill the wrong person.

However, in whatever ways revenge is justified by others, it is still unacceptable to me since no one must take justice in his or her own hands. To fulfill their vengeance, Hamlet and Laertes had to hold justice in their hands, but as it appears, a person can easily be deceived; therefore, one’s revenge can always be misled, just like what happened to Laertes. Hamlet’s revenge only appears justifiable as he knew the truth completely. Thus, although Hamlet and Laertes shared similar reasons behind their revenges, only Hamlet’s revenge appears to be justifiable in this context.

Hamlet’s and Laertes’ Revenge: Which One Seems More Justified. (2016, Sep 06). Retrieved from http://studymoose.com/hamlets-and-laertes-revenge-which-one-seems-more-justified-essay 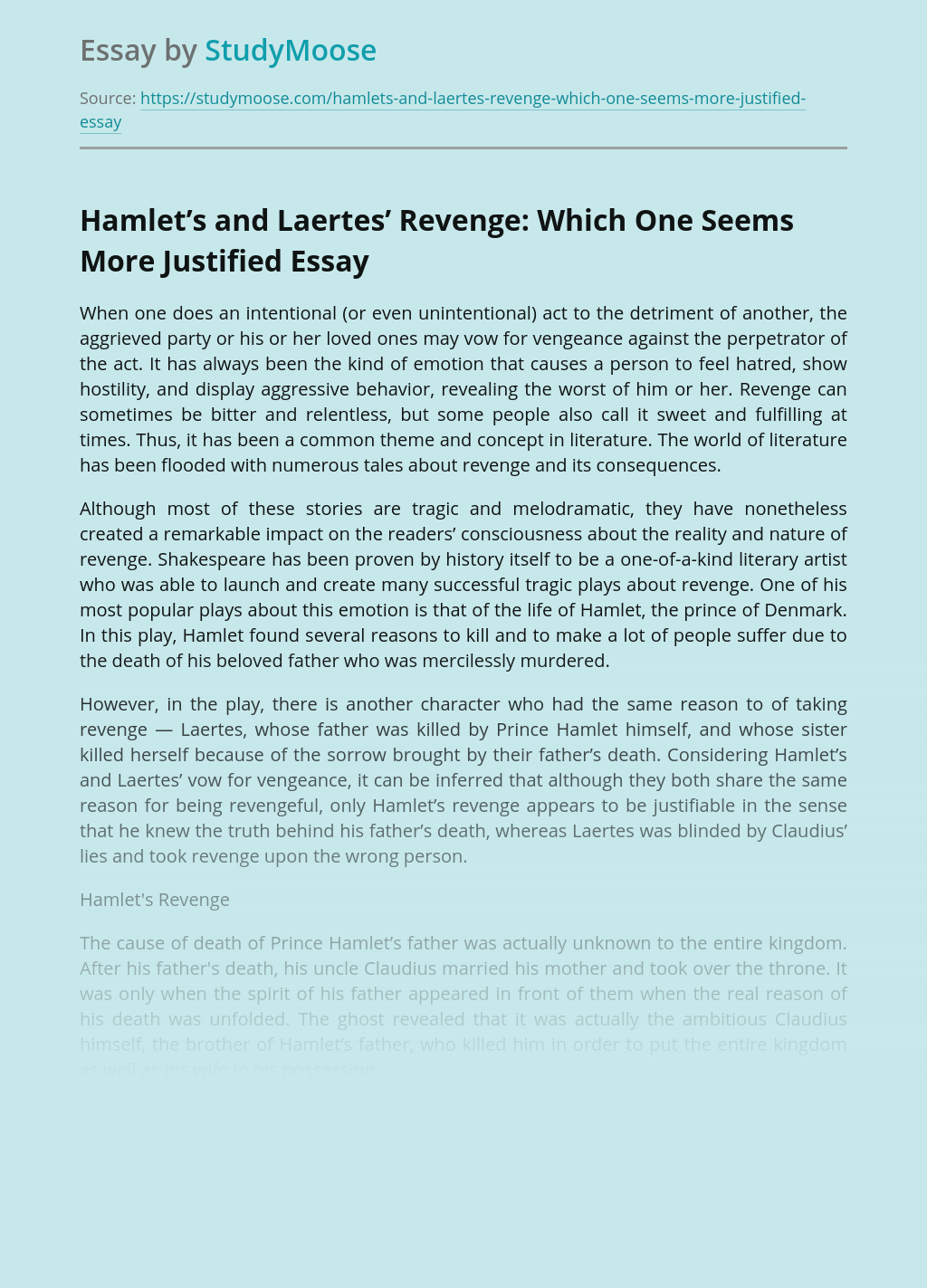 Turn in your highest-quality paper
Get a qualified writer to help you with
“ Hamlet’s and Laertes’ Revenge: Which One Seems More Justified ”
Get high-quality paper
Helping students since 2015
Stay Safe, Stay Original