No two individuals are alike, regardless of similar upbringing. It is reasonable to assume that even twins brought up in exactly the same environment, sharing the same daily activities, and living practically the same life, will act differently when faced with the same situation. Each individual evolves with his or her own uniqueness, style, and way of life. The audience witnesses this phenomenon in Shakespeare’s Hamlet. Lord Hamlet and Laertes experienced similar childhoods, and shared similar family attributes. They were both born into royalty and throughout their lives were treated as such.

Don't use plagiarized sources.
Get Your Custom Essay on Compare and contrast Hamlet vs. Laertes Just from $13,9/Page

Hamlet and Laertes were reared with the same forms of schooling, and were taught to abide by the same ethics and morals. Although Hamlet and Laertes seem to be “twined” with regard to family, royalty, and school, it is evident to the audience how such environmentally similar people can react so differently when faced with comparable situations. One such example arises when Hamlet and Laertes are consumed by a very basic human characteristic, that of revenge.

Hamlet and Laertes, although very similar in most respects, differ in that Laertes is driven by passion and Hamlet is driven by reason.

Shakespeare exposes to his audience the similarities between Hamlet and Laertes in various instances throughout the play. It is known to the reader that Hamlet and Laertes are both sons of royalty, Hamlet being the son of the former true king of Denmark, King Hamlet, and Laertes being the son of the trusted counselor to the king, Polonius. The reader is able to deduce from the manner of both families, that although they differ, they live very similar lives, and their sons Hamlet and Laertes are quite alike. For example, Hamlet and Laertes have a unique similar respect for their fathers. In one instance, in Hamlet’s first soliloquy, he proclaims respect towards his father in saying that he was an excellent king, like the glorious sun god of classical mythology, and that he is so loving to his wife, Gertrude.

“Hamlet: So excellent a king, that was to this Hyperion to a satyr, so loving to my mother that he might not beteem the winds of heaven visit her face too roughly.” (Shakespeare 14) As well, although Laertes does not know who killed his father, out of respect for him, he swears he will have his vengeance regardless of what will happen to him in this world or the next. ” Laertes: To this point I stand, that both the worlds I give to negligence, let come what comes, only I’ll be reveng’d most thoroughly for my father.” (Shakespeare 118) From here, the audience observes how similarly Hamlet and Laertes each have great respect for their fathers.

Another comparison to the seemingly similar manor of Hamlet and Laertes is that of the admirable mutual respect they have for each other, even throughout the twisted murders and losses of their loved ones. Hamlet and Laertes are on the verge of fighting a duel, a duel whose final purpose is hidden from Hamlet. Finally to Hamlets dismay he learns that the hidden purpose of the duel was for Laertes to exact revenge for the death of his father and sister. Yet, all the while Hamlet obliterates his antic disposition and publicly apologizes to Laertes for the deaths of Polonius and his sister, Ophelia. With that Laertes replies he has forgiven Hamlet but in order to save his honor and the honor of his house he must continue with the duel. Hamlet accepts graciously:

…Sir, in this audience,

Let my disclaiming from a purpos’d evil

Free me so far in your most generous thoughts

That I have shot my arrow o’er the house

And hurt my brother.

I am satisfied in nature,

Whose motive in this case should stir me most

To my revenge; but in my terms of honour

I stand aloof, and will no reconcilement

Till by some elder masters of known honour

I have a voice and precedent of peace

To keep my name ungo’d. But till that time

And will not wrong it.

I embrace it freely,

And will this brothers’ wager frankly play.-

Give us the foils.

With all the similarities between Hamlet and Laertes displayed throughout the play there is an obvious dissimilarity between them; the way they react when they are faced with the uneasy task of revenge. It is evident that Hamlet’s character and nature, which leads to his action of revenge, is that based on reason, while Laertes’s form of revenge is that based on passion and impulse.

When Hamlet’s father appeared to him in the form of a ghost claiming the current king, Claudius, Hamlets uncle, had murdered him; Hamlet did not heed the information and obtain his revenge right away. Hamlet’s reaction was that of a wise methodical individual. It took Hamlet some time to convince himself that the ghost truly was a good spirit of his father, relaying truthful words in order that his soul may rest in peace, and even then Hamlet still wanted more proof. Only until Hamlet was certain and had confirmation of Claudius’s guilt was he ready to take action. The reader sees how Hamlet finds his final convincing piece of verification through a conversation Hamlet has with his good friend Horatio:

…There is a play tonight before the king:

One scene of it comes near the circumstance

Which I have told thee of my father’s death.

I prithee, when thou seest that act afoot,

Observe my uncle. If his occulted guilt

Do not itself unkennel in one speech,

It is a dambed ghost that we have seen,

And my imaginations are as foul

As Vulcan’s stithy, give him heedful note;

For I mine eyes will rivet to his face,

And after we will both our judgements join

In censure of his seeming.

Throughout the scene Hamlet added in the play, which was re-enacting the death of his father, Hamlet and Horatio were able to confirm the truth relayed by ghost of his father and reveal the guilt of Claudius. Up until this point Hamlet was experiencing moral struggles and doubts. Hamlet wanted to be absolutely certain Claudius was the murderer of his dear father before any more blood was spilt. In order for Hamlet to be absolutely certain it took reason and evidence of Claudius’s guilt to allow himself to avenge his father.

Conversely, Laertes did not need the degree of evidence in order to avenge his father and sisters death. Even without knowing the one responsible for either, Laertes is quick to promise revenge. “Laertes: And so have I a noble father lost, a sister driven into desp’rate terms, whose worth, if praises may go back again, stood challenger on mount of all the age for her perfections. But my revenge will come.” (Shakespeare 123) Despite Laertes limited knowledge of what truly happened to his father and sister, he, passionately, is quick to swear revenge regardless of the consequences.

Shakespeare has revealed to the audience that the revenge they wish to exact is driven by passion in the case of Laertes and reason in the case of Hamlet. Shakespeare’s approach to this was to reveal to the audience how Hamlet and Laertes were similar. He accomplished this through discussing and illustrating the similarities between family, childhood, and royalty as well as showing the similar admiration and respect they had towards their fathers, seen through Hamlets kind admirable words towards the late King Hamlet, and Laertes’s hastiness to avenge his fathers death and sisters madness regardless of what he may suffer.

Furthermore, Shakespeare expresses the mutual respect between Hamlet and Laertes as seen in the opening of the duel and the exchange of sincere heartfelt words. While Shakespeare made Hamlet and Laertes’s similarities known to the reader he also illustrated their differences when faced with a difficult situation. Shakespeare was able to do this through expressing to the reader how Hamlet was able to control his primal urge of revenge through rational, and Laertes’s uncontrollable desire to avenge motivated by passion and love.

With life comes experience. Every moment one lives, is a lesson, a lesson on how to act and react in every situation. Individuals can be reared with similar parenting, family and school environment, and still react quite differently under the same set of circumstances. When one is faced with a situation so extreme as avenging a loved ones death, it is impossible and wrong to say that another would have done the same in that situation. The challenges of life are what guide one to the next level; no two challenges are ever the same, no matter how similar they may be.

Compare and contrast Hamlet vs. Laertes. (2016, Jun 22). Retrieved from https://studymoose.com/compare-and-contrast-hamlet-vs-laertes-essay 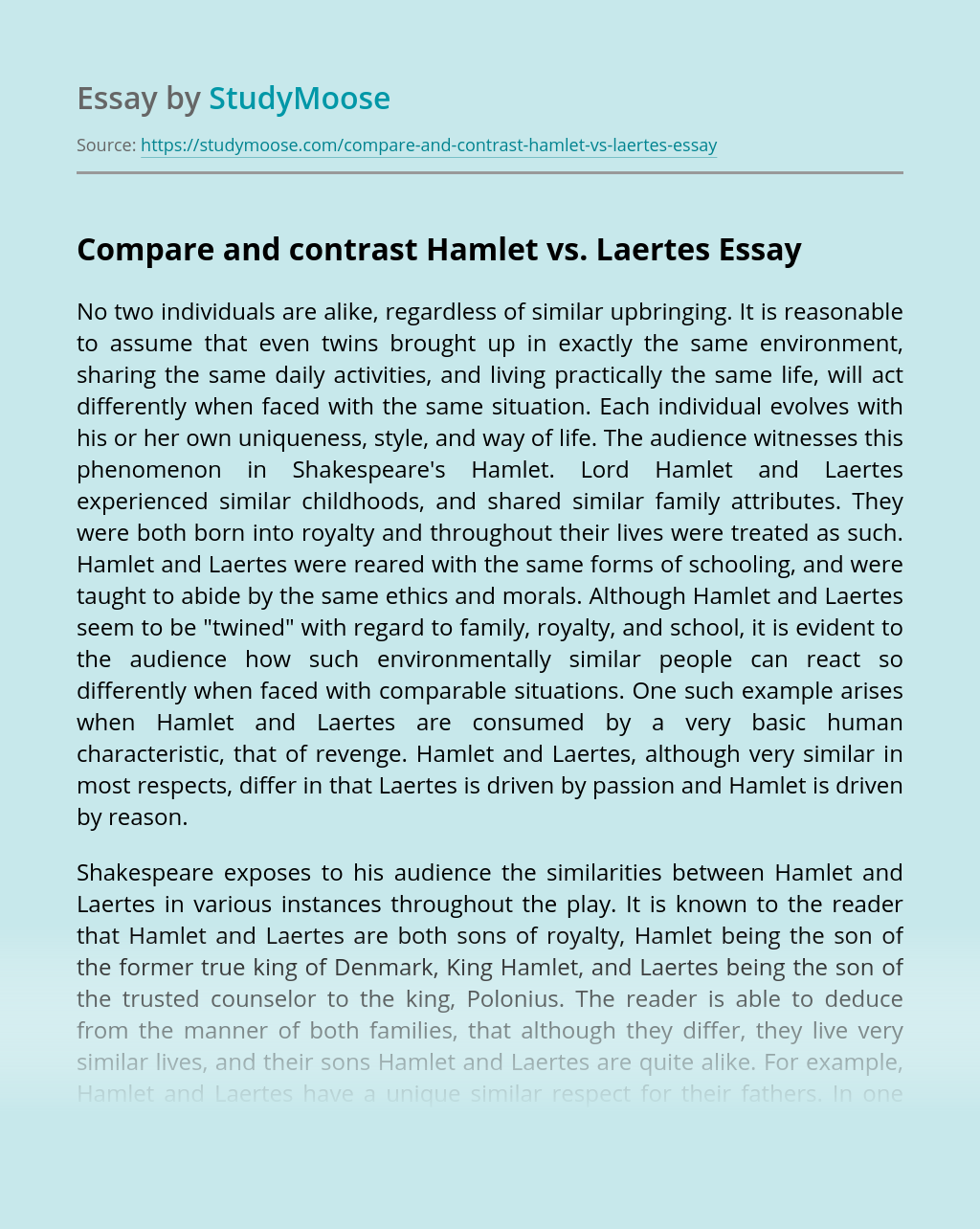