Windows Are the Eyes to the Soul: Functioning Window Motif in Shelley’s Frankenstein

Throughout Frankenstein, Mary Shelley uses various reoccurring images. Motifs such as the moon, eyes, and fire are seen many times throughout and add a stronger sense of understanding to the novel. Although windows do not appear nearly as many times as these other images, their consistent placement in important scenes makes them notable in the text. By further examining the placement and context of window references, the reader can use this symbol as a tool to deepen the understanding of the relationship between Victor Frankenstein and the creature.

Don't use plagiarized sources.
Get Your Custom Essay on Windows Are the Eyes to the Soul: Functioning Window Motif in Shelley’s Frankenstein Just from $13,9/Page

One of the reasons that windows are such a useful literary device in this novel is because they set up a physical barrier between Victor Frankenstein and his creation. The first appearance of a window takes place when the creature comes to Frankenstein’s apartment during the first time Victor sees the creature since the night of its awakening. The extreme horror that Victor felt was palpable: “I started from my sleep with horror; a cold dew covered my forehead, my teeth chattered, and every limb became convulsed; when, by the dim and yellow light of the moon, as it forced its way through the window shutters, I beheld the wretch… (Shelley, 57).

Because the creature decided to enter the room through the window, Victor was not able to observe him with the barrier of the window between them. Later in the novel, Victor gets a chance to look upon the monster with the aid of a window: “I trembled and my heart failed within me, when, on looking up, I saw by the light of the moon the demon at the casement” (159). While Victor is clearly still uneasy at the sight of the creature, it seems that the physicality of the window between them separates them to the point that the monster seems like scary.

The observation taking place on either side of the window is important, by placing a physical barrier between the two, they can each without the greater danger that would exist if the window was not there. Another important characteristic of windows is the fact that both parties on either side of the barrier are able to see each other. For example, in the scene that the creature reappears at window, lingering before entering, not only does Frankenstein have the ability to view the creature, but the creature also has the ability to look at his creator.

This reenforces one of the most endearing aspects of the character of the creature; although the creature is responsible for the crimes he committed, he was failed by Victor who had a responsibility toward the monster as its creator. Of the nine scenes in which windows are present, three of them are examples of the creature being outside in the darkness and Victor being inside in a lighted area.

Although Mary Shelley never explicitly stated that Victor sees a reflection of himself, the contextual clues surrounding these instances lead the reader to realize that when Victor looks through the window at the creature, he is also able to see a reflection of himself superimposed upon his view of the creature. The effect of this unique perspective through the window is one of the ways that Shelley shows her readers how similar both Frankenstein and his creation are. Although he shuns his creature as it gains life, its return gives Victor a clear visual on how alike they really are.

Victor outwardly fears and chastises the creature, but in reality he needs to be looking upon himself first. Taking the windows motif a step further, one calls to mind the common expression ‘the eyes are the windows to the soul’. It is not far fetched to assume that Shelley had this concept in mind as she was using both eyes and windows in her story. By giving Victor the ability to see a reflection of himself over the image of the creature, it seems that the phrase is given a reversal: ‘the windows are the eyes to the soul’.

In this sense, when Victor looks out his window at night to view the grinning face of the creature, he sees himself in the window as well. By looking at the window he is looking at himself, his soul, the creature. Windows in Frankenstein illustrate the similarities between Victor and the creature in more than just the physical sense. Both Frankenstein and the monster use windows to observe. Windows allow viewing subjects at a distance. It seems that throughout the novel, both Victor and the creature are more comfortable in the observer role more than a participant role.

When the creature arrives at his dwelling in the woods, he finds a window “through which the eye could just penetrate” (103). He uses this window to observe the De Lacey’s for many months, learning from them about humanity. Victor also displays a propensity to observe, rather than participate. When he arrives at Chamounix, a place that he seeks out for its “magnificence” and the “eternity of such scenes”, Victor decides to remain at the window “watching the pallid lightnings that played above Mont Blanc” (90-91).

Although he could have gone outside to experience these natural scenes in a more participatory way, Victor proves to the reader that he is more content remaining inside observing the outside. Victor Frankenstein’s creature is also an outsider in the untraditional way in which he uses windows. When entering indoors, the creature invariably uses windows as a means of access even though there is no explicit reason that he should not use the door.

An example of the creature using the door is as Victor is working on a female for him. after Victor finds the corpse of Elizabeth after the creature kills her. Although the creature first appears at the window as per usual, he instead uses the door to gain access to the room. It is important to note that upon his entrance, instead of calling Victor his “creator” as he usually does he calls him “slave”(96, 160) This change in address demonstrates the monster reversing his established role with Victor.

Doors seem to give the creature a sense of entitlement, but when the creature uses windows to enter a room, he is the outsider. The final paragraph of the novel leaves the reader with an image of the creature leaping out of the window of the room in Walton’s ship in which the dead Victor lies, ultimately leaving the reader with a sense of the creature remaining outside of society. He explains to Walton his plans to burn himself, and then “he sprang from the cabin window [… he was soon borne away by the waves and lost in darkness and distance” (211). Because Shelley consistently uses entering and leaving via windows throughout the novel as a way to highlight the creature’s isolation from normal society, the image that ends the novel leaves the reader with a stronger understanding of its significance. In Frankenstein, Mary Shelley employs windows as a symbolic tool in order to deepen the reader’s understanding of the complex relationship between Victor Frankenstein and the creature.

Windows function as a way to demonstrate the similarities between the creature and the creator is the way in which they interact with the world and also in a physical, reflective sense. Windows also expose each to the other while setting up a physical barrier between them. Additionally, windows help the reader understand the extent to which the creature remains an outsider, despite his efforts to join society. Windows add another layer of significance to the complex interactions between Victor and his creature.

Windows Are the Eyes to the Soul: Functioning Window Motif in Shelley’s Frankenstein. (2017, Feb 10). Retrieved from https://studymoose.com/windows-are-the-eyes-to-the-soul-functioning-window-motif-in-shelleys-frankenstein-essay 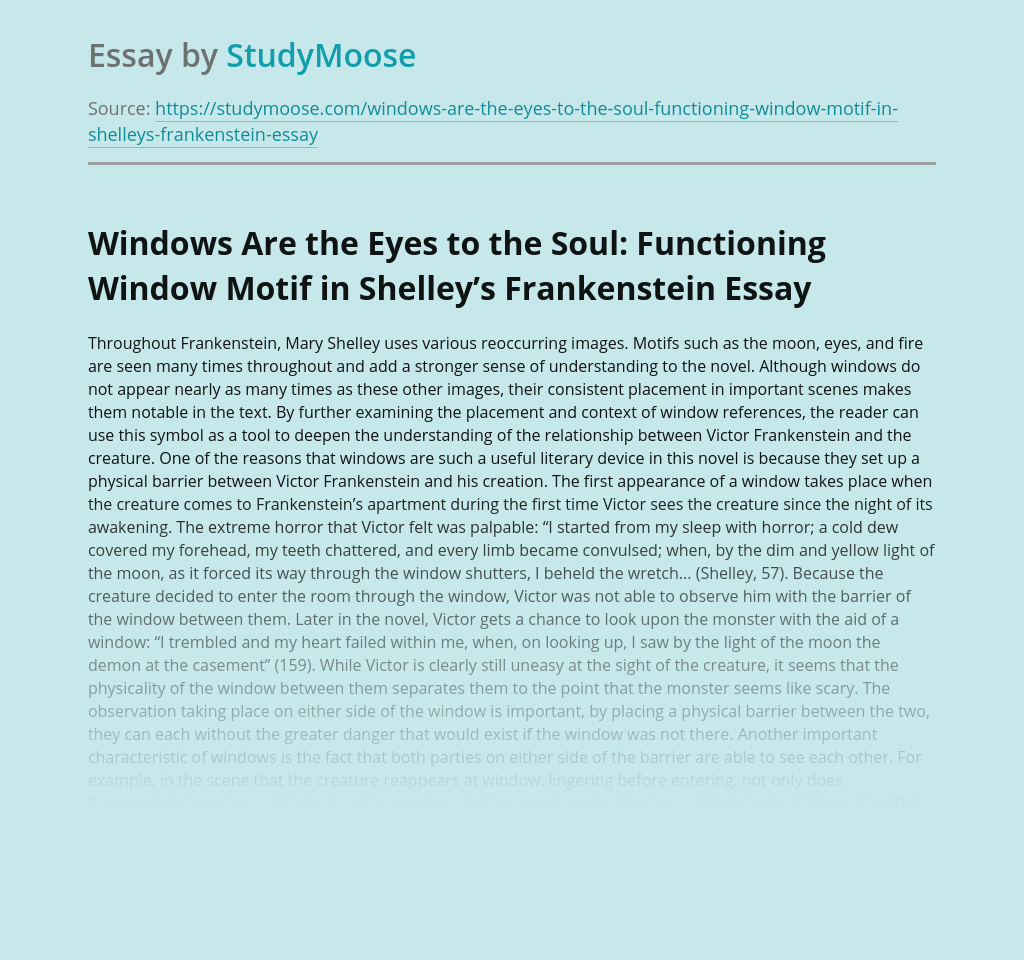 Look Before You Leap

Frankenstein is not a literary island, isolated and alone. It is connected to a great many literary works by some common themes. One such theme is the idea of experimentation. Mythology in particular and history in general, has shown us that the right to experiment comes with an equal responsibility to stop and think about...

Family in Mary Shelley’s Frankenstein demonstrates a myriad of roles, influencing Victor Frankenstein and his creation. Victor’s childhood establishes a connection between the reader and Victor, building his character. The monster is influenced by the various episodes with the family of cottagers The recounting of Victor’s childhood coalesce the reader to Victor, conveying his affection...

View sample
Get Essay
In Gothic texts, women are either hopelessly submissive or significantly absent

Mary Shelley and Samuel Taylor Coleridge are two recognized writers of the Romantic era. Works by both authors are special in numerous methods. The profound influence of Coleridge’s” The Rime of the Ancyent Marinere” is shown in Shelly’s “Frankenstein” in regards to narrative structure, themes and literary strategies. This essay will compare and contrast the...