The Lord of Savagery

“There are too many people, and too few human beings.” (Robert Zend). Despite having a lot of people existing on this planet, just a few are ordained and civilized. The corruption that lay innately within humans has taken the best of them.

In the book Lord of the Flies, by William Golding, a group of boys are stranded on an island far away, with no connections to the adult world. These children, having no rules or civilization, have had their true brutal nature exposed, thus released.

Don't use plagiarized sources. Get your custom essay on
“ The Lord of Savagery ”
Get custom paper
NEW! smart matching with writer

The savagery depicted in Lord of the Flies symbolizes the boys’ ferocity due to their quest for ascendancy, their loss of identity, and the evil that lies inherently within the heart of a man.

The main way in which the abandoned boys seek authority and respect is by appearing strong and powerful. In order to appear strong and powerful, the boys give in to the savage instincts to ignore, pick on, mock, or even physically abuse boys who are weaker than them.

Jack represents this power-thirsty dictator who strives recognition as a powerful leader. “Jack, painted and garlanded, sat there like an idol.” (Golding 164). In Christian theology, worshipping idols is considered sacrilegious for turning away from the authentic deity. By idolizing Jack, the boys now worship the brutality within themselves. One of Jack’s tactics for luring in the boys into following him is by instilling fear in them.

Jack refuses to admit to the murder of Simon that he helped commit alongside Piggy and Samneric.

He enjoys implanting the constant fear within the boys to ensure his authority and power on the island. He has become the epitome of a bloodthirsty, in-human villain. The boys’ starvation for dominance, specifically Jack, has taken them into a never-ending frenzy that resulted in horrific, remorseless consequences.

The novel portrays a world of rampage and moral bleakness which is accompanied by the main characters’ loss of identity. The boys go through gradual degradation into the abyss of bestial behaviour. For instance, Jack’s mask conceals him from the conducts of a civilization: “The forest near them burst into uproar.

Demoniac figures with faces of white and red and green rushed out howling…stark naked save for the paint and a belt was Jack” (Golding 154). Jack’s mask is used to delineate the unleashing malevolent nature that an ethical society would keep constrained. The mask encourages the barbaric behaviour of the boys and provides them with the new identity of shameless killers.

Moreover, Simon’s death had great symbolism in various aspects, but mainly the boys’ uncontained barbarity, “At once the crowd surged after it, poured down the rock, leapt on to the beast, screamed, struck, bit, tore. There were no words, and no movements but the tearing of teeth and claws.” (Golding 168). Simon has always embodied the goodness on the island.

As evil has possessed the other boys, the goodness has been abolished from the island. Simon’s death highlights the violent savagery and the boys’ loss of identity during the dance. In abbreviation, the boys go through transmogrifications as they progressively embark on a new ferocious life free from social confinements and ramifications.

The Lord of Savagery. (2019, Nov 14). Retrieved from https://studymoose.com/the-lord-of-savagery-essay 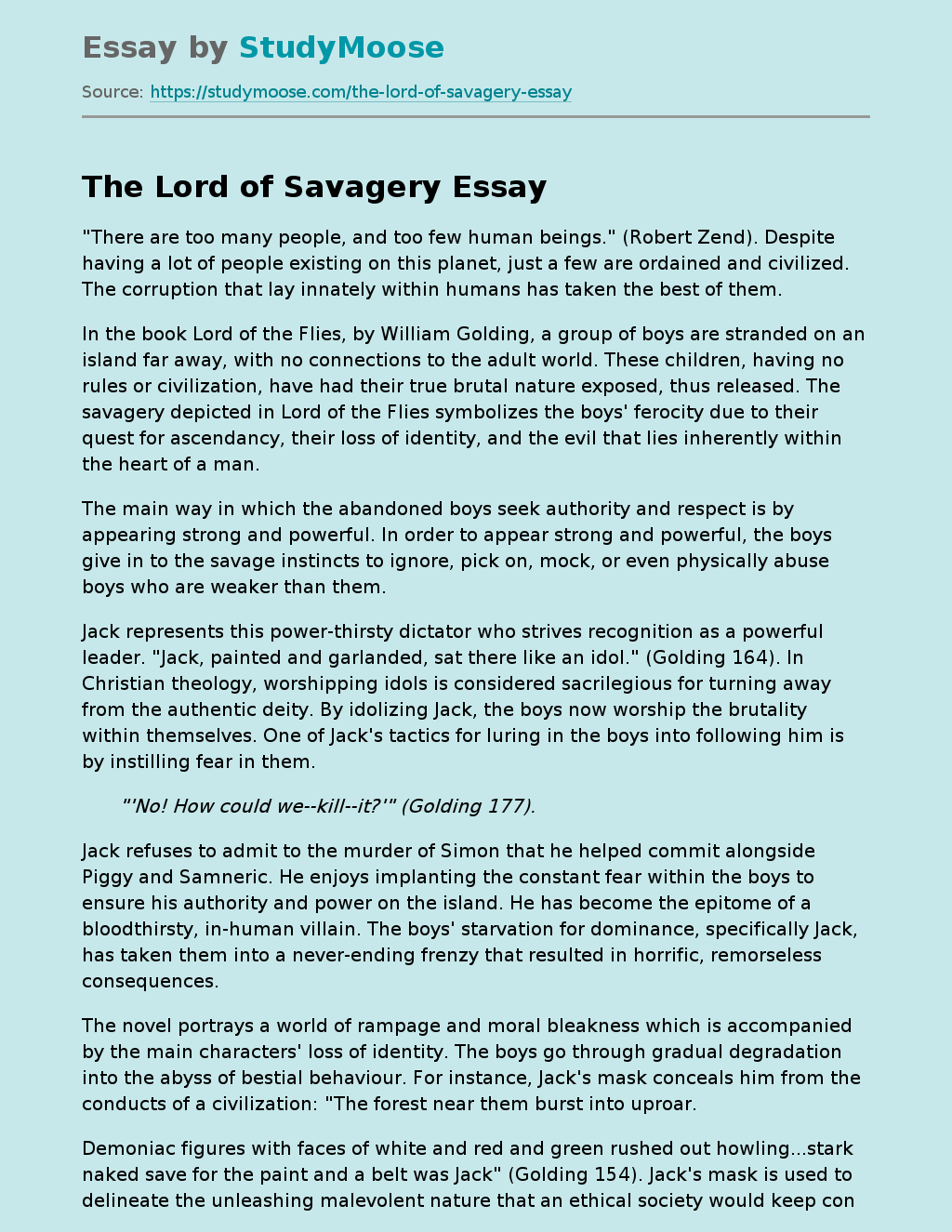