“The theme is an attempt to trace the defects of society back to the defects of human nature. The moral is that the shape of society must depend on the ethical nature of the individual and not on any political system however apparently logical or respectable. The whole book is symbolic in nature.” — William Golding

In lord of the flies, Golding expresses elements of multiple defects in society that can be traced to be defects in human nature. Whether it’s lack of self-control, violence, savagery, authority, common stereotypes, etc.

Get a verified writer to help you with Defects in Society

, we’re all accountable for our defects as people. I believe the characters portrayed within the book also give us a good sense of what our society is like in present day.

Characters such as Ralph demonstrate a good, authoritative, head-on-shoulders kind of person, a person wanting to be in charge to keep order, their interest being for the betterment of the people, a positive side for society. While characters such a Jack show a selfish, power hungry, discriminatory side of society, which leads to all things negative.

Both characters are very much alike in a sense though. As people, we strive to be the best we can and if getting there means we have to incorporate both sides, then we’ll do it.

Components of society such as lack of self-control, violence, savagery, authority, societal stereotypes, etc., are demonstrated immensely throughout the book. Golding expresses this with examples such as the boys jumping to conclusions about Simon and putting him to his death with the threat of him being the ‘beast’, the superiority vs.

inferiority expressed with the dividing of the two groups; the “Biguns” and the Littluns”, then you have Jack as a prime example of lack of self-control where he becomes power hungry in the sense of an authority leader, removing ralph from his position and gaining the respect of the tribe just as Ralph had once did.

A societal stereotype demonstrated within lord of the flies is the fact that throughout the whole novel, Piggy was unnamed, no one even bothered to know his name, and he died nameless. The boys had placed an initial view on him and proceeded to not inquire about him any longer. This happens in our society on a daily basis. We place a label on someone, push them away, humiliating those who differ, and making them outcasts. I believe this was a strong statement from Golding’s perspective.

As a society, I believe Golding was trying to communicate that essentially, when the going gets tough, we just give up. When we’re faced with difficult situations or put in a predicament we’re not exactly comfortable with or is not considered our norm, we turn the other cheek and shy away from what’s in front of us. This was demonstrated within the novel as the boys we’re getting too in over their heads about their horrid fears of the beast. Not actually knowing what is was, they let their fears get the better of them without investigating, only to find out that it was the farthest thing from a beast; a simple parachutist. Obviously, their situation was different to today’s standards, but the idea’s similar.

As stated previously as a societal component, savagery played a large part throughout Lord of the Flies. This was communicated between aspects of civilization also. Both were demonstrated by Golding with a few major symbols within the novel; those being the conch shell, as well as the Lord of the flies, which both are represented by Ralph and Jack. Throughout the chapters, you see the aspects of savagery come out more with jacks’ person. From the times of leaving the signal fire in times of hunting, he has lost his sense of innocence. It became a situation of food over thought. With the conch, it was solely the deciding factor of who had authority within the group or whose turn it was to speak essentially. This still conducted order and made things run smoothly. Everyone had adapted to it for the time being until savagery took over and the killing of piggy ended the custom of the conch as well.

In conclusion, despite the various aspects William Golding has incorporated into Lord of the Flies to demonstrate the defects in society being traced to the defects in human nature, everything within the book still remains true today and I definitely believe that’s what he was going for. He wanted something for civilization to read and reflect upon and that’s exactly what I’ve done. How he’s incorporated societal views, perspectives and problems and found a way to relate it back to a group of young boys stranded on an island fighting for survival is intriguing.

Get a verified writer to help you with Defects in Society 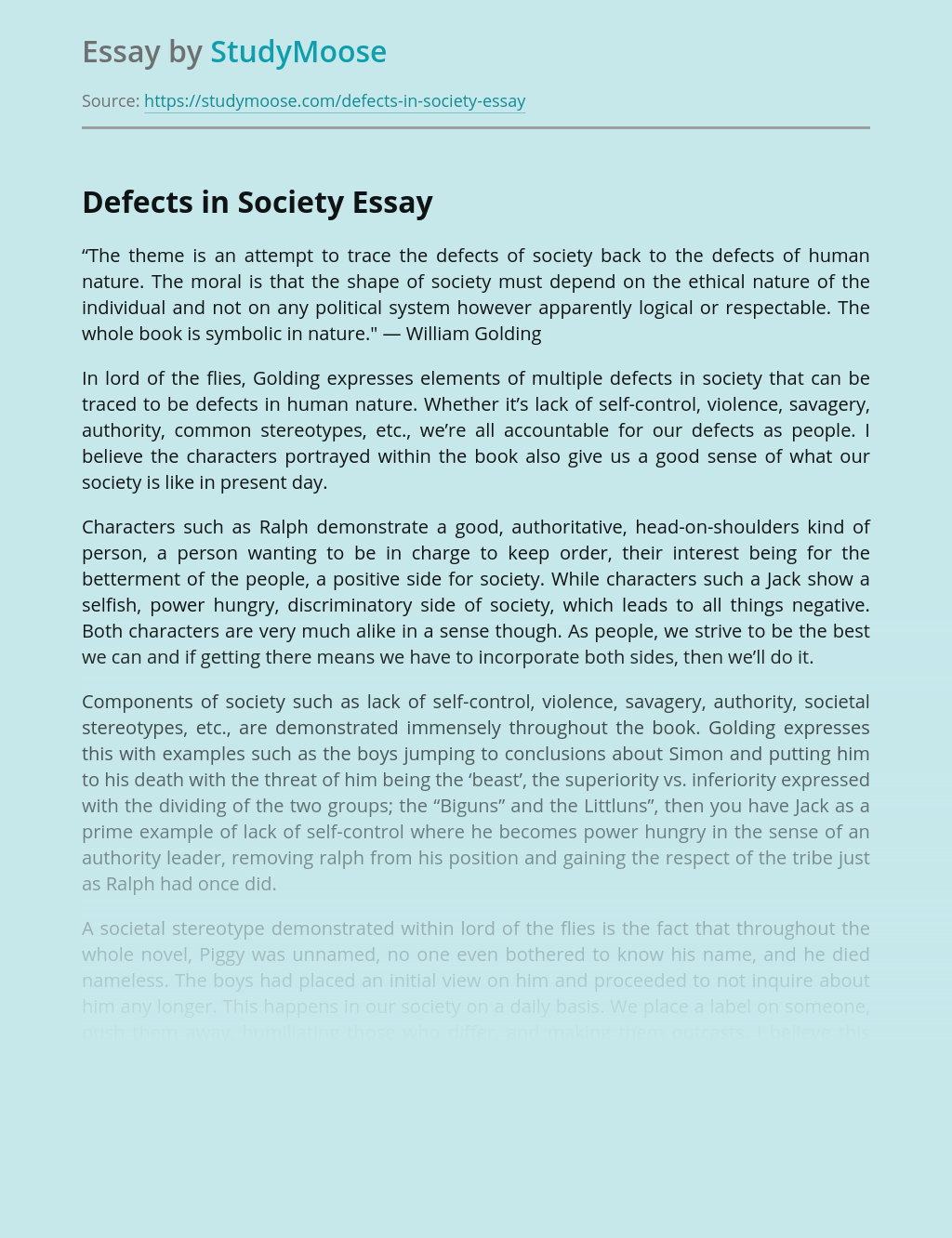 The establishment of a single, comprehensive definition of myth has proved unmanageable to attain. No one definition can satisfactorily embrace all the various kinds of stories that can legitimately be classed as myths on the basis of one criterion or another. The attempt to define myth in itself, serves to highlight the very qualities of...

Religon in Pompeii and Herculaneum

“The study of Pompeii and Herculaneum provides us with a wealth of sources – However we are faced with issues regarding their limitations, reliability and evaluation.” This report will assess the truth of the above statement referring to religious practices in Pompeii and Herculeuim such as local, state, household and foreign religion. Though the abundance...

Get Essay
The Crucible By Arthur Miller - religion and puritan belief

“The Crucible” by Arthur Miller is set in the seventeenth century and involves the Puritan beliefs and religion. The characters in the play are very religious. Anyone who was considered to be a witch was condemned to death. This was because any sort of witchcraft was considered as worshiping the devil, which is totally against...

In the first two books, Aslan is a clear-cut figure. Aslan is what Jesus would be like in Narnia. He acts as a parallel and inspires fear in his enemies and love and devotion in his friends. He makes the four children high kings and queens, and banishes evil from his kingdom. It is like...

The main character in this story is a Jewish girl named Alicia. When the book starts she is ten years old, she lives in the Polish town of Buczacz with her four brothers, Moshe, Zachary, Bunio, and Herzl, and her mother and father . The holocaust experience began subtly at first when the Russians began...

Key part in seeing how the court really works in Salem is after Giles submits an accusation against Putnam that he made his daughter cry witch against his wife because he wants Giles’ land. When Danforth asks for the name of the supposedly honest man who heard Putnam talk to his daughter about accusing Martha...

Tess, a wronged maiden troubled by her past, suppressed by the society, ultimately loses her life destroying her seducer. Hardy’s genius is reflected in the presentation of Tess and her experiences against the historical framework of nineteenth century England with its agricultural decadence, economic instability, religious and moral beliefs. She bears the responsibility of her...