Lord of the Flies (Men are inherently evil)

“Man produces evil as a bee produces honey” was a remark that was made by William Golding after his experience serving in the second world war. Lord of the Flies is a symbolic novel of his experience and this quote was his way of showing that all men were evil; it was as natural for a human to be evil as it was for a bee to produce honey. However, despite being within a bee’s natural instinct to produce honey, it isn’t within a human’s natural instinct to be evil.

Don't use plagiarized sources. Get your custom essay on
“ Lord of the Flies (Men are inherently evil) ”
Get custom paper
NEW! smart matching with writer

It is shown in Golding’s novel that society influences one’s morality. Lord of the Flies also shows that humans are self-serving, looking out for themselves and that sometimes it is necessary to be corrupt to survive. We also see that it is within a humans’ instinct to follow a leader whether they are moral or immoral.

Lord of the Flies demonstrates that one’s morality is influenced by the society they are in.

John Locke, an English philosopher, believed that humans were born clean and pure, but it was society that influenced the evil inside them. This is evident in Golding’s novel as even the most ‘evil’ character, Jack, has shown signs of being moral. In the second chapter, when he comes back from discovering that they were on an island, he states, “‘We’ve got to have rules and obey them.”’ The author uses irony to compare the difference of Jack’s behaviour from the start of the novel to the end.

However, perhaps we see Jack as the most corrupt character because he was the first to realise that in order to survive, he would need to be more sadistic, more savage. It is obvious from then on that he tries not to show compassion, innocence or kindness. At times, he does not succeed. An example of this is on page fifty-five when Jack says, “You can feel…you’re not hunting, but- being hunted.” This quote shows Jack’s uncertainty, and he explains that you have to be animal-like to survive and live as long as you can in a society without rules and laws, something Locke thought was absolutely necessary to sustain happiness. Here, Jack seems to relate to himself as an animal, which shows that he only acts the way he does because he saw the circumstances they were in, and decided that the only way to get off the island alive was to be beast-like.

Humans are self-serving which is why they may be perceived as evil. In order to fit in and feel safe, sometimes selfish acts will be pursued. Golding writes for the characters to become more savage. This attribute even reaches the symbol of goodness and order, Ralph. He realises that in order to survive, he could not always do the correct thing. On page one hundred and thirty-eight, Golding uses personification twice to create the drama in his message. “Piggy and Ralph, under the threat of the sky found themselves eager to take a place in this demented but partly secure society”. He is trying to dramatise the evilness that Piggy and Ralph have succumbed to, melding with the others, however, all this quote proves is their common longing for a place with others and not any depth of evilness. We see that people who starting in the were following Ralph ‘the good side’ joined.

It is within our human instincts to follow a leader, whether they are moral or immoral. Having a powerful leader gives the ‘weaker’ ones a sense of safety, and in Lord of the Flies, the two main leaders were Ralph and Jack. Ralph was the leader of the ‘good’ side, while Jack was the chief of the ‘evil’ side. The members of Jack’s tribe are not evil in nature, but are merely forced to follow his orders as he believes this is crucial for them to subsist. “With dreary obedience the choir raised their hands.” The use of imagery in this quote (shows) that when Ralph asks the young children who they would vote for for chief, the choir-boys felt obliged to vote for Jack. Jack can be compared to Adolf Hitler, a dictator in World War II. Hitler manipulated his soldiers, and alters their thinking. Similarly, Jack is doing the same thing. Leading the ‘evil’ side, he adjusts the minds of the choir-boys. The people who are following Jack are doing so for a sense of protection as he is powerful.

Despite being first published fifty years ago, Lord of the Flies is still studied and read to this day as it shows that it is brutality of the second world war. Golding subtly passes through his message that what happened in Germany could occur anywhere and that sometimes, it is necessary to be evil. Throughout the novel, we see the lengths some of them, in particular Jack, go to for survival. We are shown that it is necessary to pursue evil acts in ‘life or death’ situations and that it is of human nature to choose a leader and follow his actions, even if they are immoral.

Lord of the Flies (Men are inherently evil). (2016, Feb 26). Retrieved from https://studymoose.com/lord-of-the-flies-men-are-inherently-evil-essay 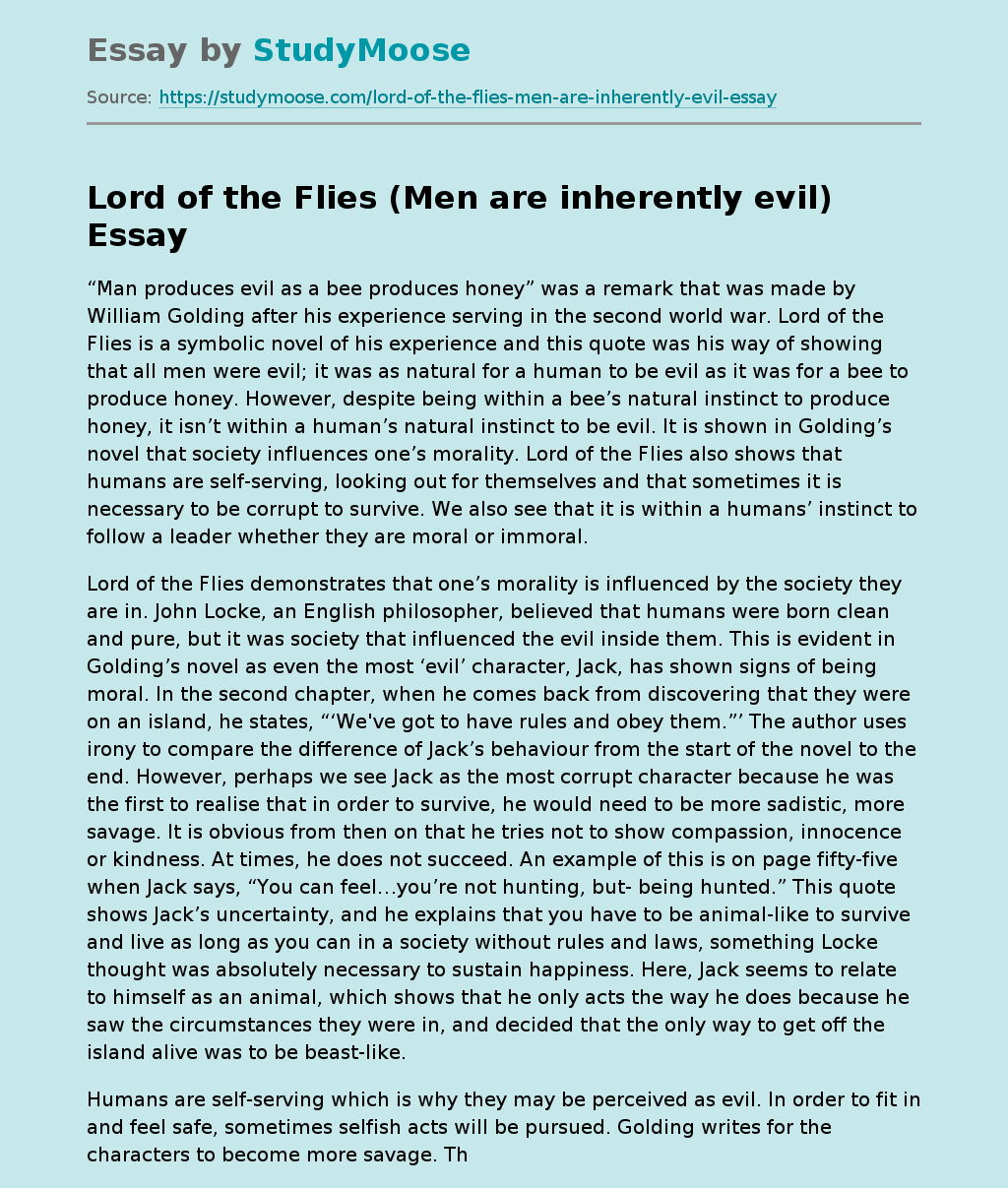