Lord of The Flies: Is The Human Nature Good or Evil?

The novel Lord of the flies is a book written by William Golding in 1954. This novel places its focus on a group of British boys stranded on a deserted island and their ineffective attempt at governing themselves. The prominent theme of this novel is that all people are born with a dark/evil side. The darkness within every soul uncovers whenever people are unsupervised and uncivilized. Golding uses three main characters, Jack, Ralph, and Simon to illustrate the theme of the story.

Don't use plagiarized sources. Get your custom essay on
“ Lord of The Flies: Is The Human Nature Good or Evil? ”
Get custom paper
NEW! smart matching with writer

A thorough analysis of the book Lord of the Flies demonstrates that human nature is evil.

The first glimpse of Jacks’s inner evil can be seen after the killing of his first victim, a pig.

“His mind was crowded with memories; memories of the knowledge that had come to them when they closed in on the struggling pig, the knowledge that they had outwitted a living thing, imposed their will upon it, taken away its life like a long satisfying drink.

” (page 81)
As the character that opposes the protagonist, Jack finds excitement from having outwitted a living thing and imposing his will upon it by taking the pigs life. Driven by the thirst of power, Jack is throughout the book, willing to do anything to get what he wants. The thrill of killing makes Jack move on from killing pigs to later on killing Simon and Piggy. The lack of remorse and guilt shown after killing Simon and Piggy clearly shows Jack starting to lose his conscience and by that way letting his inner evil act out.

In the case of Jack, a decent English schoolboy becomes a cold blooded murderer, showing that he already conceals an inner evil, hence, illustrating the theme of the novel.
The charismatic, athletically built and good-looking protagonist of Lord of the flies, Ralph, shortly illustrates the theme of the book. Ralph took upon him the responsibility to rescue the other boys by proving himself to be the leader they need. Still, during the book Ralph at some points sense himself falling for the same evilness as the other boys. When Ralph joins the hunt, his inner evil has one of few brief moments to expose itself, “Ralph was too fighting to get near, to get a handful of that brown, vulnerable flesh” (page 164). This shows that even Ralph, the good leader who struggles for order, democracy and civilization on the deserted island, harbors an inner evil, waiting to be released. To some degree, Ralph contributes to the increasing evilness on the island.

At the end of the novel, Ralph is being hunted by the “hunters” throughout the deserted island. He stumbles and descends at the legs of a military officer, and starts to weep, ”Ralph wept for the end of innocence, the darkness of man’s heart, and the fall through the air of a true, wise friend called Piggy” (page 290). Ralph weep because of all that he lost, he comes to realize that nothing will ever be the same for him, knowing the evil that inhabits every human, hence, illustrating the theme of the novel.

The first to acknowledge the evil that inhabits every single human being is Simon, one of the boys named in the book Lord of the Flies. When the boys in the book

Lord of The Flies: Is The Human Nature Good or Evil?. (2020, Jul 12). Retrieved from https://studymoose.com/lord-of-the-flies-is-the-human-nature-good-or-evil-essay 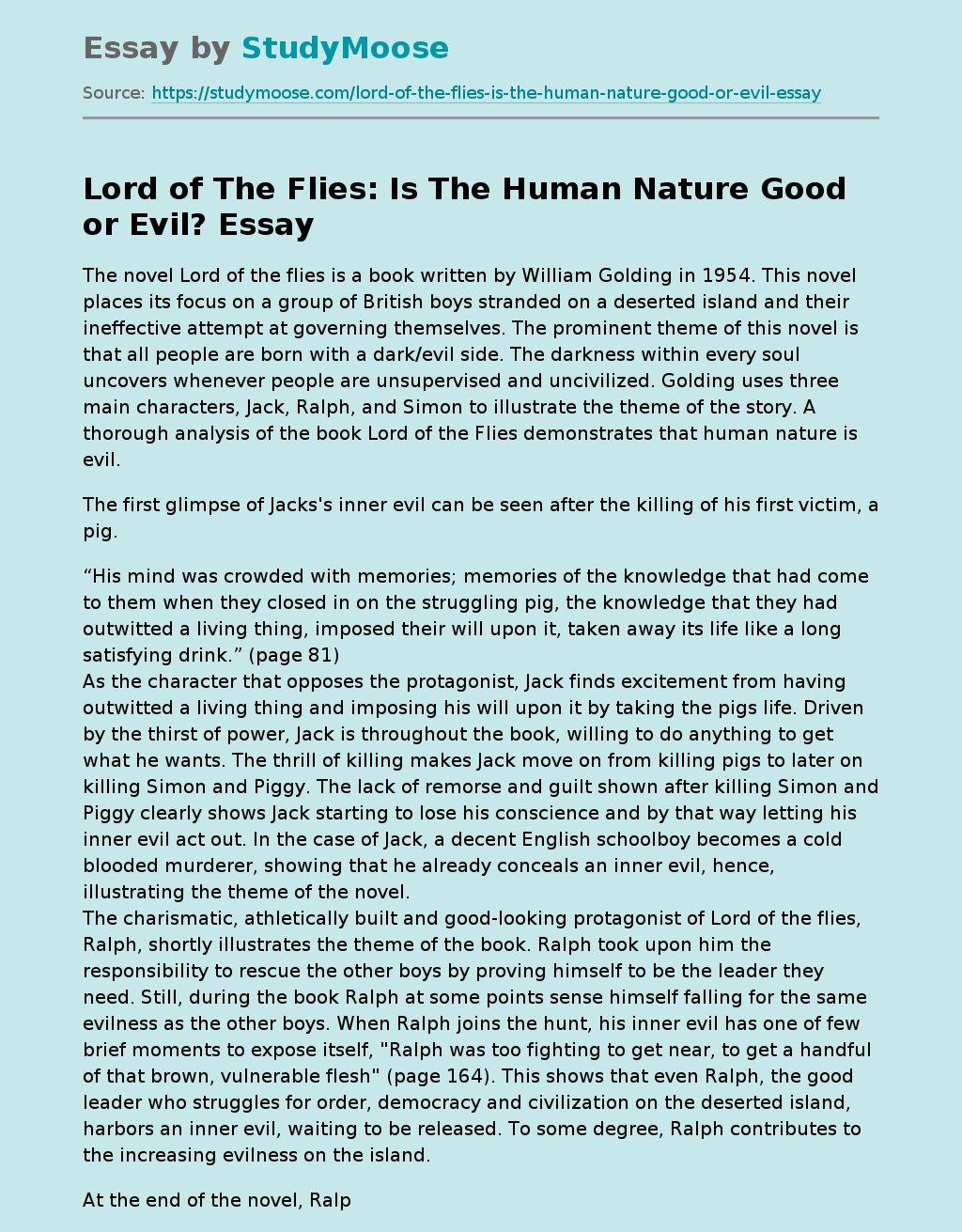