Good vs. Evil - Lord of the Flies

Star Wars, Superman, James Bond—all of these are stories which chronicle the ever-present warfare between good and evil. What exactly is good? How does one describe evil? The answers to these questions are highly subjective, and could be debated for years on end without ever reaching a final conclusion. However, it is widely agreed that each person is inherently born with two sides; one of which is good, the other evil. It is this sense of inherent good and evil in all of us that William Golding tried to warn and protect society against in his classic, The Lord of the Flies.

Don't use plagiarized sources. Get your custom essay on
“ Good vs. Evil – Lord of the Flies ”
Get custom paper
NEW! smart matching with writer

It is clear to anyone who reads this book that Golding is trying to exaggerate the inherent good and evil in the boys on the island. The boys are all well-raised, British prep school boys. They have grown up in a dignified and sophisticated society, and are by no means savage before they crash on the island. However, in a very short period of time, the boys lose the intelligence and sophistication they had been raised with, and become wild and crazy and almost completely devoid of any signs of civilization.

The boys come to the island controlled by their inherent good, but the longer they stay, the more the inherent evil begins to take over. Inherent good and evil are also represented in the book through different characters. For example, Simon seems to be the most sensitive and civilized boy on the island. He is also the only one who recognizes that the true beast on the island is inside the boys themselves.

Simon represents the inherent good in human beings. However, Roger is clearly bloodthirsty with little or no concern for those he hurts when while he is trying to accomplish a task.

In fact, Roger enjoys deliberately hurting other boys on the island. Roger is representative of the inherent evil in man-kind. Through these examples and many more, Golding clearly warns us against the good and evil inside all of us. One may wonder, however, what society can do in order to help prevent catastrophe. After all, if good and evil are truly inherent—what can be done to fix the problem? Golding shows us the answer to this problem through certain events in his book. One of the most obvious examples of this is in the chapter “Huts on the Beach.

” This chapter describes the process which the boys go through to build their shelters on the beach. When they begin the first hut, all of the boys are working together. The final result it strong and of high quality. However, as work continues on the second and third huts, the boys begin to leave for an assortment of reasons—and discontinue their work on the huts. The second hut, with only a few boys working on it, does not end up as strong as the first one. Predictably, the third hut, with even less boys working on it, is of the worst quality out of the three huts.

The building of the huts shows that when the boys work together, the end product is much higher quality than when only a few boys are working to create the shelter. Symbolically, Golding is trying to tell society that if we work together, we can ultimately saves society from ourselves, and the inherent evil in all of us. Another example of this message is in an example of what will happen if society instead, continues on the path it is currently on, and people continue to right against each other rather than working together. Toward the end of the story, Jack creates his own group on the island.

This divides the island in two—Jacks’ group on Castle rock, and Ralph’s group which remains on the beach. At the time of this separation, the already lacking democracy on the island weakens drastically, and everything falls apart. Simon is killed, Piggy’s glasses are stolen, SamnEric are tortured and manipulated, Piggy is murdered, and Ralph’s life almost comes to a dramatic end. These events represent the obvious truth that when the people fight against each other, the result is extremely counter-productive, and will eventually corrupt society.

Inherent good and evil, and the qualification of each, is a topic that has been debated for centuries, and is sure to be debated in the future. We may never all agree on one true definition for good and evil. We may never even agree on whether good and evil both truly exist. However, the important thing is to realize that what Golding was trying to warn us against is a real problem. Society is heading in a negative direction, and if we don’t do something soon, it may be too late to turn back. 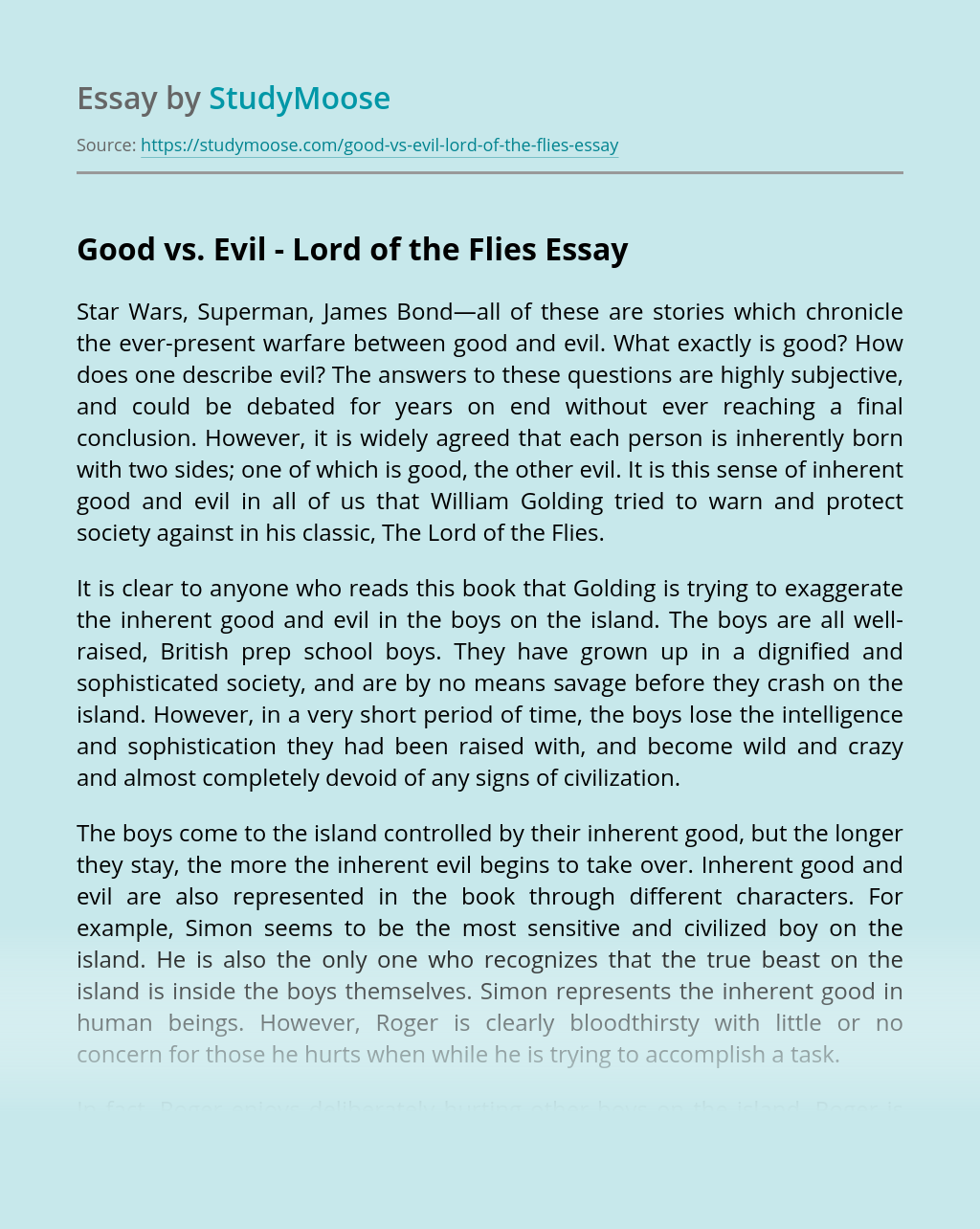