After the publication of Noli, Rizal planned to visit the important places in Europe. Dr.Maximo Viola agreed to be his traveling companion. Rizal received Pacianos remittance of P1000 which forward by Juan Luna from Paris and immediately paid his debt to Viola which he loaned so that the Noli could be printed. First, he and Viola visited Potsdam, a city near Berlin.

At the dawn of May 11, 1887, Rizal and Viola, two browned-skinned doctors on aroaming spree, left Berlin by train.

Don't use plagiarized sources. Get your custom essay on
“ Rizals Grand Tour of Europe with Maximo Viola ”
Get custom paper
NEW! smart matching with writer

Spring was an ideal season for travel. Their destination was in Dresden, one of the best cities in Germany?.

Their visit coincided with the regional floral exposition which Rizal was interested in Botany.

They visited Dr. Adolph Meyer, who was overjoyed to see them. Rizal was deeply impressed by painting of “Pro metheus Bound” at the museum of the art. They met Dr. Jagor at the scene of the floral exposition. They planned to visit Leitmeritz (now Litomerice, Czechoslovakia) and Dr.

Jagor heard them. The doctor advised them to wire Blumentritt of their coming because the old professor might suffer a shock at their sudden visit.

Rizal and Viola sent a wire to Blumentritt after leaving Dresden where Treschen (Decin) was their next stopover.

At 1:30 pm on May 15, 1887, the train arrived at the railroad station of Leitmeritz. Professor Blumentritt was at the station carrying a pencil sketch of Rizal which he sent to identify his friend. Blumentritt get a room at Hotel Krebs, after which he bought them to his house and stayed Leitmeritz May 13 to 14 1887.

They enjoyed hospitality of Blumentritt family. The professors wife, Rosa, was a good cook. She prepared Austrian dishes which Rizals liked very much. Rizal and Viola’s tourist guide is the professor. One afternoon, they were invited to a beer garden. They met the burgomaster of that town and they were proudly introduced by Blumentritt.

Another one afternoon, Rizal and Viola were invited to a meeting of the Tourist’s Club of Leitmeritz. Praising Austria’s idyllic scenes and its hospitable, nature-loving, and noble people. Rizal met Dr. Carlos Czepelack, the renowned scientist of Europe and he was introduced to Professor Robert Klutschak, an eminent naturalist.

Rizal and Viola visited the historic city of Prague. They carried letters of recommendation from Blumentritt to Dr. Wilkom, professor in University of Prague. Rizal and Viola visited the Tomb of Copernicus the famous astronomer,the museum of natural history,the bacteriological laboratories,the famous cave where san juan nepomuceno imprisoned,and the bridge from which this saint was hurled into the river.

May 20 they arrived at Vienna capital of Austria-Hungary. They met Norfenfals, one of the greatest novelist in that time. They stayed at Hotel Metropole. They also meet two good friends of Blumentritt.Masner and Nordman,Austrian scholars.

May 24, Rizal and Viola left Vienna on a riverboat to see beautiful sights of Danube River. As they traveled along the famous river, Rizal observed keenly river sights.

The river voyage ended in Lintz. They traveled overland to Salzburg, and from there to Munich where the sojourned for a short time to savor the famous Munich Beer. Crossing the Frontier to Switzerland

They stayed from June 2 to 3 1887 and continued the tour to Basel (Bale), Bern, and Laussane

Rizal and Viola left Laussane in a little boat crossing the foggy Leman Lake to Geneva.On June 19, 1887, his 26th birthday, Rizal treated Viola to a blow-out. Rizal and Viola spent fifteen days in Geneva. On June 23, they parted ways. Viola decided to return to Barcelona while Rizal continued his tour to Italy. Rizal Resents Exhibition of Igorots in 1887 Madrid Exposition Rizal received sad news from his friends in Madrid of the deplorable conditions of the primitive Igorots who were exhibited in this exposition. Some of these Igorots died. Rizal was outraged by the degradation of his fellow countrymen.

He visited Turin, Milan, Venice and Florence. On June 27, 1887, he reached Rome. He was thrilled by the sights and memories of the Eternal City? Rome. On June 29th, Rizal visitedfor the first time the Vatican, the ? City of the Popes? and the capital of Christendom. After a week of staying in Rome, he prepared to return to the Philippines. He had already written to hisfather that he was coming home. 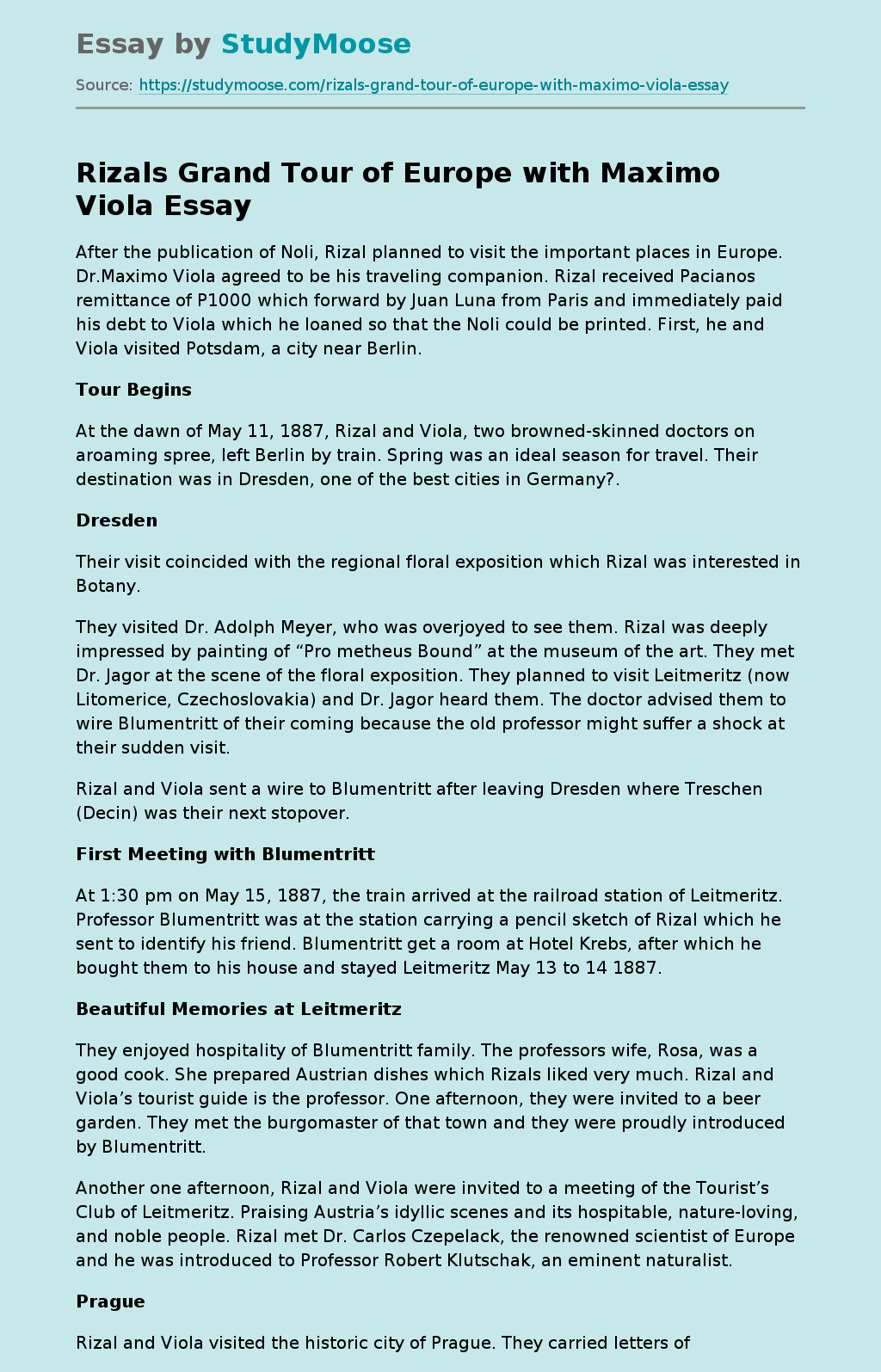