Shylock is a Villain

A person’s belief in religion does not necessarily mean that he or she is a kind and loving person. In the Merchant of Venice by William Shakespeare, this is shown through a character named Shylock. Due to his evil qualities, many people do not take an interest in him and dislike him. Additionally, his mental outlook and devilish purposes throughout the play are plainly destructive. In a similar manner, when Shylock takes an enjoyment in tormenting other people, this clearly shows that he is a crooked person.

Don't use plagiarized sources. Get your custom essay on
“ Shylock is a Villain ”
Get custom paper
NEW! smart matching with writer

All in all, Shylock’s thirst for revenge and desire for wickedness indicate that he is a villain.

Many people despise him due to his evil nature. During the event where Antonio is making a 3000 ducat loan from Shylock, Antonio says that Shylock is “an evil soul producing holy witness is like a villain with a smiling cheek./A goodly apple rotten at heart” (Shakespeare 1.3.97-99). Antonio is stating that even though Shylock is stating some passages from the Bible and acting like he is a good person, he really is a terrible person.

Essentially, Shylock is a person that looks good on the outside but is truly mischievous in the inside. This is also proven through Launcelot. During the period when Launcelot is working under Shylock, Shylock gives him a small amount of food to eat causing him to starve. As a result, when Launcelot is talking about Shylock and Gobbo says to give him a present, Launcelot becomes furious. Launcelot would rather “give him a halter” because Shylock has starved him (2.

In a similar manner, Shylock’s daughter, Jessica, thoroughly dislikes her father because of the way he treats other people. As a result, Jessica is “ashamed to be [her] father’s child” (2.3.17). Later on in the play, she plans to run away and steal from him because she cannot stand living in the house with him. After all, the suffering that Shylock encounters later on root from the rude actions he displays. Shylock’s spiteful attitude and wicked intentions are villainous. This attitude of his is clearly shown against Christians. During one side scene, Shylock says he hates Antonio “for he is a Christian’ (1.3.39).

Since many people can clearly see Shylock’s hatred against Christians, Bassanio does not want to make any deal with him. When Shylock agrees to loan Antonio 3000 ducats, Bassanio does not “like fair terms and a villain’s mind” because he knows that this is too good to be true (1.3.179). While the deal may seem pleasant, Bassanio knows that that there is an evil purpose tied into this deal. Unsurprisingly, Bassanio is correct. Bassanio finds out that Shylock wants to take Antonio’s life when Shylock states the punishment if they do not pay him back.

Correspondingly, Shylock’s intention in this agreement is admitted. Shylock says that if this bond does succeed and does not feed nothing else, “it will feed [his] revenge” (3.1.50-51). With this statement, Shylock really does intend to take Antonio’s life. Ultimately, with Shylock continuing his disapproving behavior and desires, he continues to grow as a villain. His enjoyment of torture and death are the signs of a criminal. At the time when Shylock is creating a bond with Antonio, Shylock says “let the forfeit be nominated for an equal pound of your fair flesh, to be cut off and taken in what part your body pleaseth me” (1.3.147-150). Even though Antonio knows that Shylock is aiming to kill him, Antonio takes the deal because he is confident that he will be able to pay back the debt with twice the sum. Surprisingly, his confidence gets shattered when he finds out he is unable to pay it back because all of his ships have gone missing.

When Shylock hears news about this event, he is “glad of it. [He’ll] plague him, she’ll] torture him. [he] [is] glad of it” (3.2.109-110). This comment shows that he is a broken person finding happiness in torturing a person. Not only that, but because of his daughter stealing money from him and running away he gets angry to the point where he wouldn’t mind if his daughter is dead; no, he would be glad if his daughter is dead. Shylock expresses his anger by saying “I would my daughter dead at my foot and the jewels in her ear” (3.1.83 84). This reveals that Shylock cares more about his money than his daughter. Obviously, Shylock is a corrupted father who takes enjoyment in making people suffer.

Overall, Shylock’s evil choices and behaviour define him as a wretched evildoer. As an evildoer, many people dislike him when he carries out his twisted actions and comments. Likewise, with his hateful objectives and unpleasant personality, he continues to look like a villain. Lastly, he enjoys villainous obsessions: revenge, torture and death. While some people may have a positive appearance, the Merchant of Venice secretly states that people may be completely opposite from what is in the inside.

Shylock is a Villain. (2021, Dec 07). Retrieved from http://studymoose.com/shylock-is-a-villain-essay 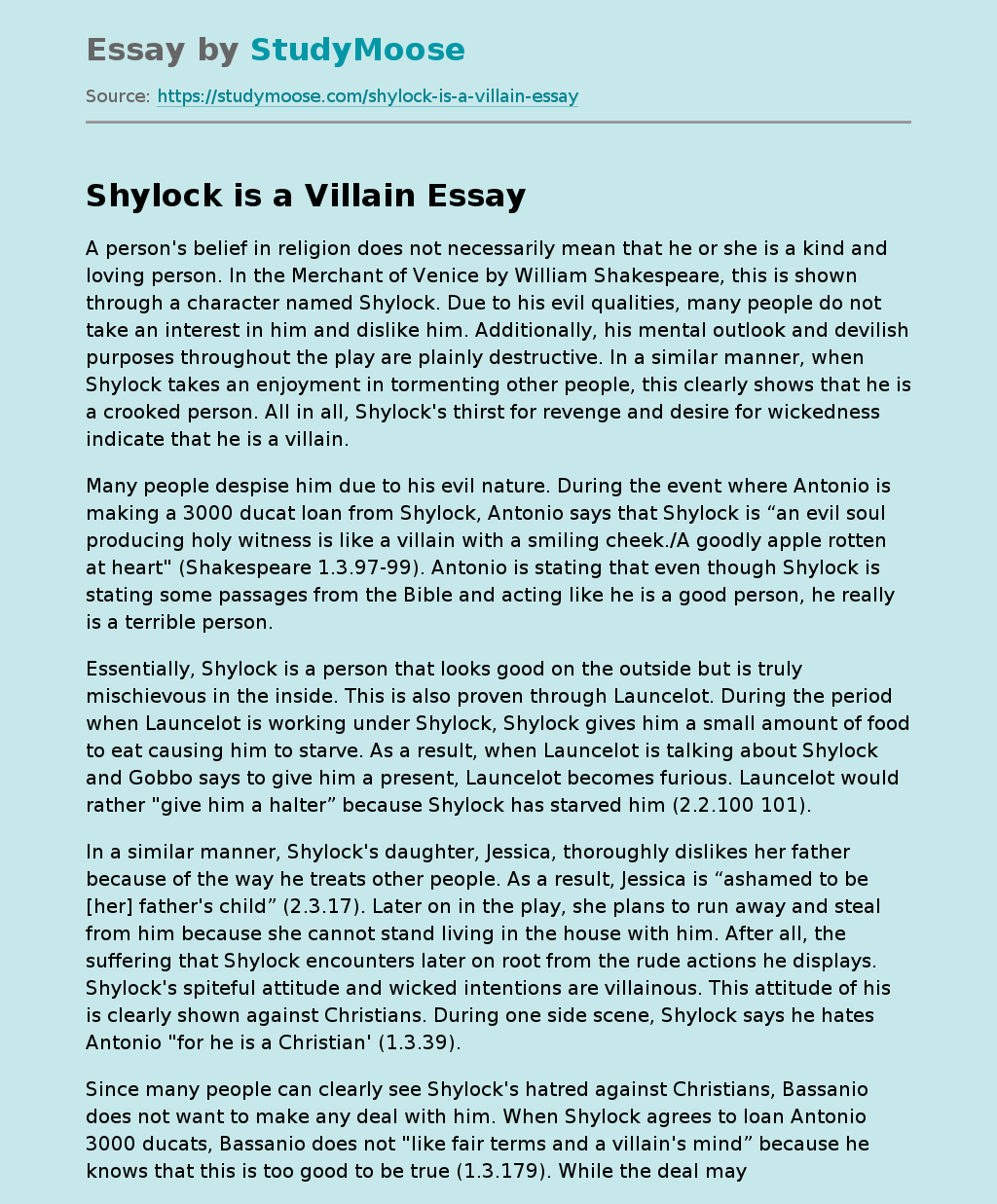