Lady Macbeth Is the Real Villain of Macbeth

Shakespeare’s Macbeth explores the notion of villains through its key characters and throughout the play the audience is left wondering who is actually the ‘real’ villain. Lady Macbeth seems to portray certain characteristics of a villain and appears to have evil intentions and Macbeth is also perceived as a villain due to his violent rampage. Nevertheless, both Macbeth and his wife have a conscience and they realize what they’ve done wrong.

With this considered, it is ultimately the witches who are the true villains as they continue to encourage Macbeth on his murderous journey and they are soulless as they have a sense of what is right and wrong, however they find pleasure in disrupting the natural order.

Turn in your highest-quality paper
Get a qualified writer to help you with
“ Lady Macbeth Is the Real Villain of Macbeth ”
Get high-quality paper
NEW! AI matching with writer

During the exposition act, Lady Macbeth immediately displays certain characteristics similar to a villain, and she appears to have evil intentions.

Since she fears that Macbeth is too full of “th’ milk of human kindness” to take the steps necessary to make himself king, her attitude becomes very strong and forceful and she states “unsex me here, and fill me, from the crown to the toe, top-full of direst cruelty! Make thick my blood” which presents her evil intentions as she desperately wants the crown for her husband, and does so in a dark way to emphasize the supernatural world as she would put aside her natural femininity so that she can do the bloody deeds in order to seize the crown.

It also seems to be Lady Macbeth that is the “spur to prick the sides of [Macbeth’s] intent”, as she is adding to his “vaulting ambition”.

Moreover, she belittles her husband, as she believes he needs to be “more the man”, and portrays herself as a woman who is capable of doing something unthinkable. At the beginning of the play, Macbeth is introduced as a “brave” and “worthy gentleman”, as he fought bravely and was loyal to his king. However, the witch’s prophecies affect his ultimate desire to become “king hereafter”, and he begins to display certain characteristics associated with a tragic hero, thus being a fatal flaw.

In Macbeth’s situation, his fatal flaw is his “vaulting ambition” for power. This is the point in the play when he is viewed as a villainous character, as he sets out on his violent rampage and commits murder, therefore putting the entire kingdom in danger. Furthermore, Macbeth has the opportunity to decline his wife’s temptations, however his hunger for power takes its toll on him and he continues on his murderous journey. As the play progresses, the audience is able to see Macbeth’s and Lady Macbeth’s decline. Another thing that they also notice is that Macbeth and his wife have a conscience; more specifically a guilty conscience.

They actually realize what they’ve done wrong, and a terrible amount of guilt washes over them. Lady Macbeth’s guilty conscience was evident when she began getting flooded with nightmares and she would sleep walk as well as always talk about the stained blood on her hands, and how she is trying to wash it off. This idea of blood refers to guilt. “Out, damned spot! ” shows that she is struggling to remove the guilt from her hind. She also emphasizes that it’s impossible to remove the blood as she states “all the perfumes of Arabia will not sweeten this little hand”.

Towards the end of the play, Macbeth realizes the evil he has committed and he is portrayed as a victim to his own ambitious and greedy actions. Due to this realization, Macbeth is viewed as a tragic hero, and at the end of the play the audience notice his emptiness – “I have lived long enough: my way of life is fallen into the sear, the yellow leaf, and that which should accompany old age as honour, love, obedience, troops of friends.. ”. Seeing as Lady Macbeth or Macbeth weren’t the ‘real’ villains of the play, it makes way to present that the witches were the real villains.

The witches were the ones who ultimately manipulated and tricked Macbeth to kill King Duncan, Banquo, the Guards and many other people. Everything the witches do eventually lead to Macbeth’s downfall and therefore they are responsible for his demise. They continue to encourage Macbeth on his murderous journey and are displayed as soulless characters, as they have a sense of what is right and wrong, however they choose to find pleasure in disrupting the natural order as they believe that “fair is foul and foul is fair”. Therefore, Lady Macbeth isn’t the real villain of the play.

Although she has evil intentions and holds villainous characteristics, she has a conscience and becomes extremely guilty of her actions. The audience is left wondering who the ‘real’ villain is, and some may think it’s Macbeth, however Macbeth is a tragic hero as he realizes the crime he has committed, yet he still fights until his very last moment. The witches are certainly the real villains of this play as play upon the motives of Macbeth, therefore being responsible for his downfall, and they enjoy disrupting the natural order. With this said, it is quite evident that Lady Macbeth is not the real villain of the play.

Lady Macbeth Is the Real Villain of Macbeth. (2016, Sep 20). Retrieved from https://studymoose.com/lady-macbeth-is-the-real-villain-of-macbeth-essay 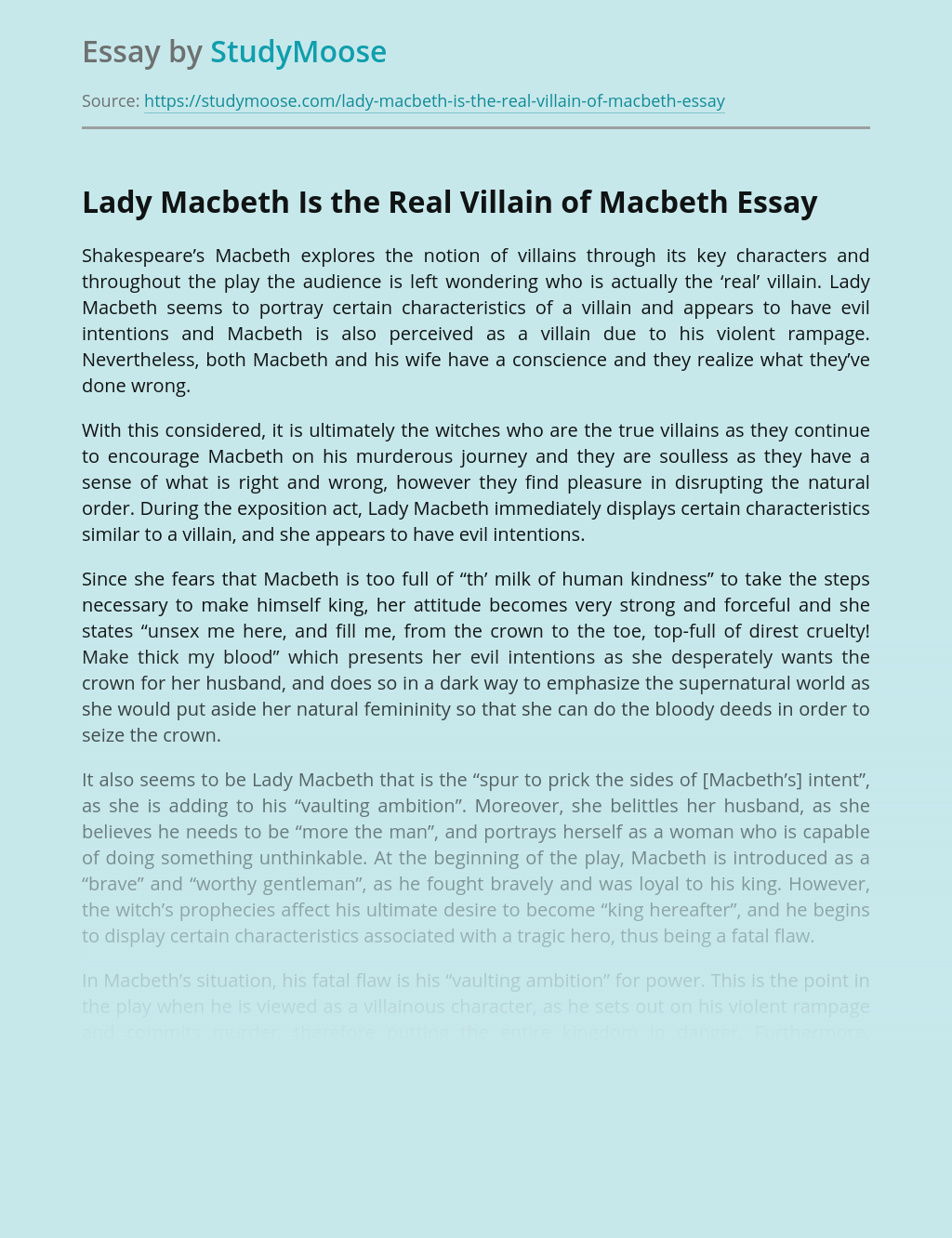 Turn in your highest-quality paper
Get a qualified writer to help you with
“ Lady Macbeth Is the Real Villain of Macbeth ”
Get high-quality paper
Helping students since 2015
Stay Safe, Stay Original