Christopher Columbus was one of the greatest sailors and explores of all time. In 1492 he discovered a “new world” and linked Europe to the Americas. His discoveries enlarged the world and began a new age of exploration, therefore changing the history of the world. His Columbian Exchange was the foundation of the future world economy.

[1] “Christopher Columbus can be considered a hero for his work on Christianity,” says John Kimble. Columbus has spread Christianity throughout the world and advanced trade with many new discoveries, thus, finding the “new world” he then discovered the first European colonies, and through those colonies he then spread the religion of Christianity.

Don't use plagiarized sources. Get your custom essay on
“ Christopher Columbus good or evil ”
Get custom paper
NEW! smart matching with writer

Columbus then brought spices and riches to all of Europe. [2] “After his return to Europe, many people were lead to believe they could explore and sail.” [3] “Only Columbus set off directly across a board, unknown sea with no specific knowledge of how far it extended or what lay on the other side.” Columbus encouraged everyone to take a risk and make their own discoveries.

Yes, Christopher Columbus was flawed but all men are. Columbus put Christianity out on a rage on all different part of the world and had those places endured in trading. With all of his achievements, he then bettered the world to be melting pot that it is to this day. Assertion 2:

Christopher Columbus was greedy, shellfish, racist and a bigot. He was responsible for the loss of life of thousands, destroyed culture and exploited those he came in contact with.

Columbus did not even find what he set out for, the East Indies, and for that alone, should not be glorified in history.

He was a robber of land, and some people think he also robbed the lives of many. [1] Christopher Columbus was found to be a cruel man who enjoys seeing the natives and suffer. [2] “They should be good servants…. I, our Lord being pleased, will take hence, at time of my departure, six natives for your Highness,” was the first thing written in Columbus’ journal according to Bourne, p.111-112; page 18 of Hanke, L. (1949).

The Spanish struggle for justice in the conquest of America. Philadelphia, PA: University of Pennsylvania. Christopher Columbus may not have killed that native people but hand he was in charge of murder’s and allowed all the killings to go on, so in those words that is just as bad, he also enslaved native people himself. All he was power and he had huge desire to rule over the land that was not his.

Margolis goes on to say the Columbus did not prevent his crewmen from raping the innocent natives, and even that he himself raped and native woman, after beating her with a piece of rope. Columbus was nowhere near a hero; he founded land that had ownership already and then took the land away viciously.

Christopher Columbus good or evil. (2016, May 25). Retrieved from https://studymoose.com/christopher-columbus-good-or-evil-essay 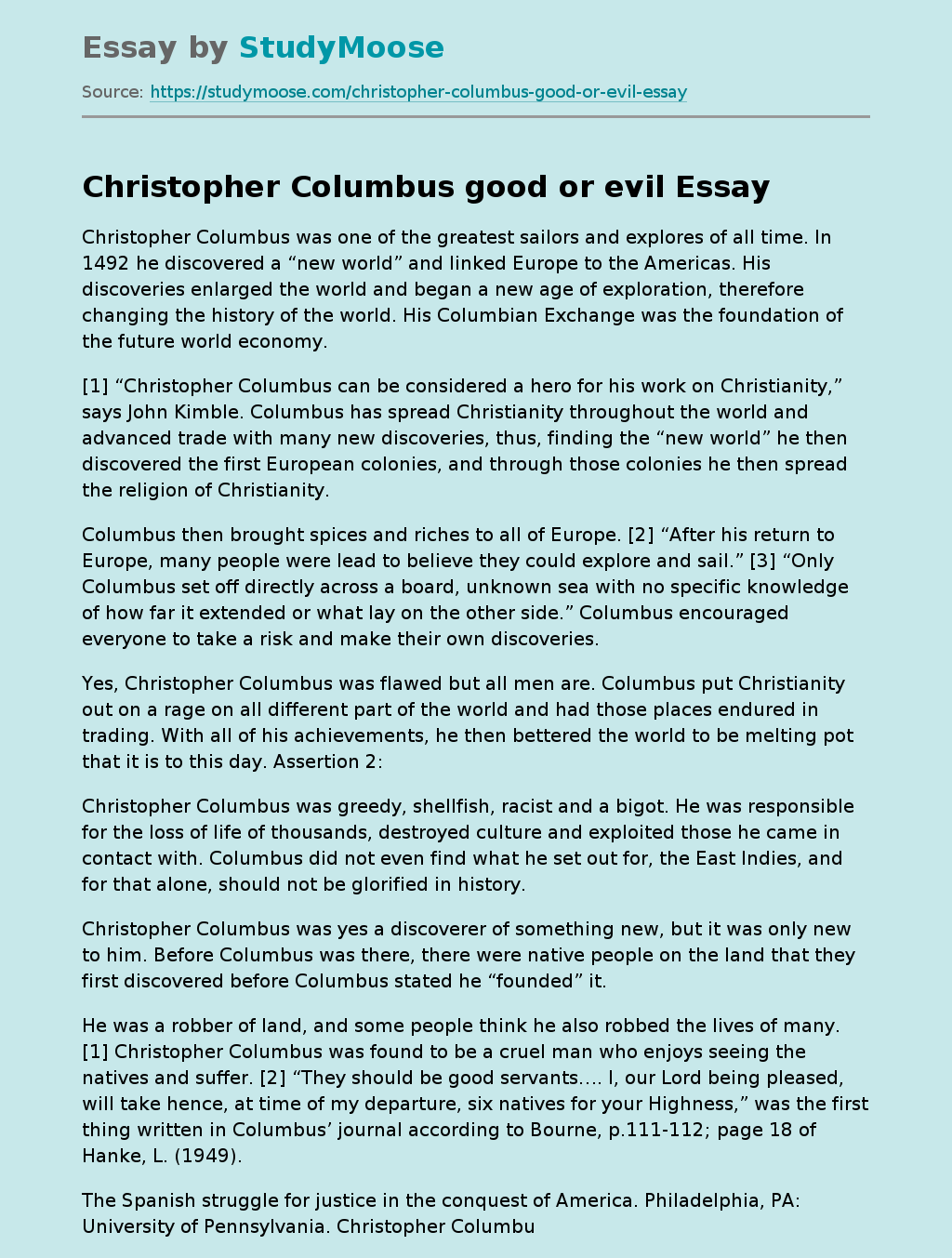