Christopher Columbus: The Most Overrated Person in History

When it comes to the most overrated person in history between the years 1492 and 1877, lately, people have been pointing their fingers at Christopher Columbus. He has an entire federally-recognized holiday named after him and his accomplishments. The day is named after him because he is known to have discovered and help settle European people into the New World, previously inhabited by Native American people. On the other hand, historical texts in this day and age fail to recognize the true authority he had over the native people, in addition to how brutal he was towards these individuals, examining far too deeply into his “accomplishments.

Don't use plagiarized sources. Get your custom essay on
“ Christopher Columbus: The Most Overrated Person in History ”
Get custom paper
NEW! smart matching with writer

Christopher Columbus made four trips across the Atlantic Ocean from Spain. He did these trips in the years 1492, then the following year, then in 1498, and finally in 1502. He wanted to locate a direct water route from Europe to Asia. Rather than doing so, however, he accidentally found himself in the American region. In the past, when Christopher Columbus came and took over the Native American’s land, Caucasian Europeans began populating the land and soon became the biggest population of race in the country.

One of the most important moments in history is when Christopher Columbus reached the United States and helped established the idea to colonize it, despite the fact that it was done in a destructive manner. This is because it contributed to European expansion. With large sums of money fueling their efforts, the European people quickly went to America. The Native Americans got in their way and were quickly eradicated, but not after leaving behind a substantial amount of contributions.

Much of the narrative for Columbus sailing to the New World included welcoming Native Americans, a gratified European group of settlers, and general peace. However, that is far from what truly happened. Many textbooks, particularly those detailing preliminary aspects of the history, provoke the myth that Christopher Columbus discovered America and worked side by side with Native Americans to help settle this newly found land. This is not the case, however. This is an unfortunate myth that has been spread throughout history textbooks, inappropriately creating a false understanding of the true history behind this event.

For one, Columbus didn’t “discover” the United States. In fact, he never actually walked on North American soil. He actually explored much of the Caribbean and Bahamas, and the United States had been inhabited by Native American people. With that being said, when he did land in this new territory, he committed severe atrocities against those who were already living there. Where he did land, he destroyed populations and took advantage of the colonists already there. The narrative that Christopher Columbus came to the United States to work with the Native people and set up a “New World” is completely false because it fails to illustrate the turmoil and horrific experiences that the native people endured during this time.

Imperialism is defined as empire building, essentially. Expansion takes place when a single region holds more power than there exist challenges to that expansion. With that being said, European civilization endured an era of rapid expansion during the end of the nineteenth century. This was the result of industrialization, and due to the organizational effectiveness of the region. At first, the Europeans colonized Latin America, as well as some parts of Africa. The Native American people were among the first group of people to be removed as a result of these European empires. When they entered this new land, they forced these people to abide by European rule.

The European people initially came to the United States with a desire for discovery, as well as money and riches. Rulers needed to locate new water passages to various parts of the world, primarily due to the fact that Italian people had authority over all of the Mediterranean routes. The search for these new passages, also fueled by a desire for discovery and wealth, is what ultimately led Christopher Columbus to come across the North American area. This “discovery” of a new land resulted in Europe quickly colonizing and expanding. The Spaniards had founded the initial European colonies in the North American region. When Columbus went back to Spain, he stated that he had located a western route to the West. Several Spanish explorers went west trying to find the exquisite spices and other desirables of Asia. Rather, they located a new type of wealth in this new region.

David Campbell discusses Christopher Columbus and how he believed that he had gotten to Asia, but instead reached what was then known as “The New World.” What is interesting is how Campbell refused to give Columbus the recognition of discovering America. Of course, Columbus did not actually “discover” America, as Campbell outlined, he simply sailed to the country that he thought was Asia. He thought this for a long time, even claiming that he had clearly gotten to the Asian peninsulas. It is quite interesting how America seemed to have been sought out as a mistake, rather than as a conquest, to which they eventually acted as the foundation for European expansion and empire development.

Despite the powerful evidence to suggest the contrary, the story of the discovery of the “New World” by the Europeans stretches on in history textbooks and society as a whole. The primary reason for this is likely because various secondary sources continue to support or illustrate this myth. To provide an example of this, in Daniel Boorstin’s A History of the United States, specifically the 2005 version, the author discusses several pages worth of the history of Columbus’ voyage to the New World. Despite this long explanation, Native Americans are only provided with a single mention, which states “The natives called it Guanahani, and Columbus named it San Salvador.”

These different sources are not offering accurate information regarding the voyage of Christopher Columbus. One can evaluate a more historically-based source that documents more accurate illustrations of what took place during this time. An example of this can be garnered from the Gilder Lehrman Collection, where Columbus wrote a pamphlet in Rome regarding his discovery of the Caribbean Islands of Juana and Hispaniola. This excerpt provides more detailed illustrations of what took place, also outlining that he actually did land in the Caribbean, rather than somewhere in the original thirteen colonies, which is likely assumed by many people.

To conclude, Christopher Columbus did contribute to the expansion of European empires. However, he did not do much of what modern history books state he did. For instance, he did not peacefully discover the New World, nor did he initially step foot on the Americas, specifically the initial thirteen colonies, in his voyage. Rather, he was a distinctively murderous man who took out Native American people in an effort to establish a new colony. With that being said, Christopher Columbus’ efforts helped result in further European expansion, but history fails to demonstrate the degree to which he made this happen.

Christopher Columbus: The Most Overrated Person in History. (2019, Dec 03). Retrieved from https://studymoose.com/christopher-columbus-the-most-overrated-person-in-history-essay 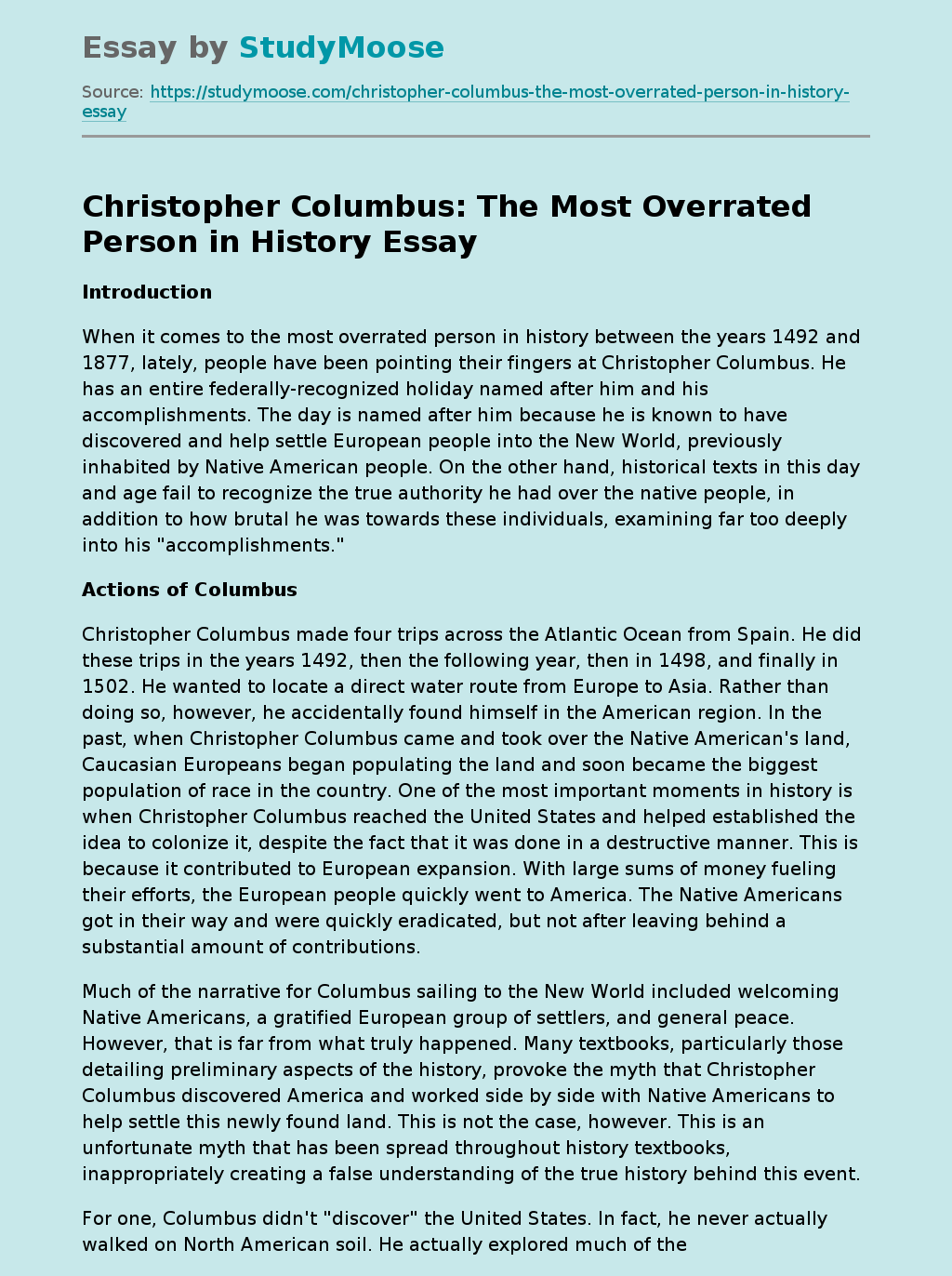