They Came Before Columbus by Ivan Van Sertima

History, as taught in the Western and Western-dominated world, provides a thesis, that America has been definitely discovered by Europeans, and the first people to reach it since the ancestries of Indians settled there were Spanish under Columbus in 1492, or at least Vikings about 1000 A.D. This paradigm dominates in science and public opinion ever since. Evidence about expeditions of ancient Egyptians to America remains unproved and belongs more to historical myths.

In his “They Came Before Columbus”, Professor Ivan Van Sertima of Rutgers University stated an impressive thesis to challenge one of the most persistent of these historical beliefs.

Don't use plagiarized sources. Get your custom essay on
“ They Came Before Columbus by Ivan Van Sertima ”
Get custom paper
NEW! smart matching with writer

His main idea is simple, but it may seem mad, because he asserts, that they were African peoples, who first reached America. Moreover, they established standing relations and trade roots with the local inhabitants. The style of the book is very engaging, almost novel-like—this makes a very good reading.

The essence of the book may be summarized in a quotation from Sertima’s book: “It would be an irony, indeed, to find that Americans ‘discovered’ Europe many centuries before Europeans ‘discovered‘ America.

But the whole notion of any race (European, African or American) discovering a full-blown civilization is absurd. They presume some innate superiority in the ‘discoverer’ and something inferior and barbaric in the people ‘discovered.’… What I have sought to prove is not that Africans ‘discovered’ America, but that they made contact on at least half a dozen occasions, two of which were culturally significant for Americans.”

Examining navigation and shipbuilding; cultural analogies between Native Americans and Africans; the transportation of plants, animals, and textiles between the continents; and the diaries, journals, and oral accounts of the explorers themselves, Ivan Van Sertima builds a pyramid of evidence to support his claim of an African presence in the New World centuries before Columbus.

Combining impressive scholarship with a novelist’s gift for storytelling, Van Sertima re-creates some of the most powerful scenes of human history: the launching of the great ships of Mali in 1310 (two hundred master boats and two hundred supply boats), the sea expedition of the Mandingo king in 1311, and many others.

The first evidence of a black presence in the America, quoted by the author, was given to Columbus by the Indians themselves. “The Indians of this Espanola said there had come to Espanola a black people who have the tops of their spears made of a metal which they called gua-nin, of which he [Columbus] had sent samples to the Sovereigns to have them assayed, when it was found that of 32 parts, 18 were of gold, 6 of silver and 8 of copper”.

Avn Sertima studies the origin “guanine” may which he tracks down in the Mande languages of West Africa, through Mandigo, Kabunga, Toronka, Kankanka, Banbara, Mande and Vei. In Vei, there is a form of the word ka-ni which, transliterated into native phonetics, would give us gua-nin[1]. This is just one of numerous examples, cited by Sertima, where the names, cultures and rituals of the Mandigos confluenced with those of the ancient Americans.

Another Spanish, quoted by Sertima is Vasco Nunez de Balboa, who in 1513 came upon a group of African war captives in an Indian settlement. He was told that the blacks lived nearby and were constantly waging wars. A priest, Fray Gregoria Garcia wrote an account of another encounter in a book that was silenced by the inquisition: “Here we found slaves of the lord – Negroes- who were the first our people saw in the Indies.[2]”

The second piece of evidence, included in the book concerns comparison of religious customs of Africans and Americans. In Africa there exist a Bambara werewolf cult whose head is known as amantigi (heads of faith) appeared in Mexican rituals as amanteca. Van Sertima considers the ceremonies accompanying these rituals to be too identical to have been independently evolved among peoples who have had no previous encounter. Talking devil is called Hore in Mandigo, and Haure in Carib. In the American language of Nahuatl a waistcloth is called maxtli, in Malinke it’s masiti. The female loincloth is nagua in Mexico, it is nagba in Mande.

The third proof of the book are archeological evidences of African presence in America in pre-Colombian times. These were in the form of realistic portraitures of Negro-Africans in clay, gold, and stone unearthed in pre-Colombian strata in Central and South America[3].

After that, the author analyzes oral history of the two peoples. The Griots—traditional historians and masters of oral literature in Mali, have stories about their King, Abubakari the second, grandson of Sundiata, the founder of the Mali Empire, who set out on a great expedition of large boats in 1311. None of the boats returned to Mali, but curiously around this time evidence of contact between West Africans and Mexicans appear in America in an overwhelming combination of artifacts and cultural parallels.

A black-haired, black-bearded figure in white robes, one of the representations of Quetzalcoatl, modeled on a dark-skinned outsider, appears in paintings in the valley of Mexico, while the Aztecs begin to worship a Negroid figure mistaken for their god Tezcatlipoca because he had the right ceremonial color. Negroid skeletons are found in this time stratum in the Caribbean. “A notable tale is recorded in the Peruvian traditions … of how black men coming from the east had been able to penetrate the Andes Mountains.[4]”

Principle possibility of trans-Atlantic voyage is studied by Sertima in view of ocean currents. He points out that these currents, which traverse the World’s oceans, serve as natural marine conveyor belts. “Once you enter them you are transported (even against your will, even with no navigational skill) from one bank of the ocean to the other.”  Several successful attempts have been made to demonstrate that it was possible to cross the Atlantic from the Equator to South America, even in small boat[5].

Even such tradition as pipe smoking is used by Sertima to prove his thesis. “The Malinke words meaning to smoke are dyamba and dyemba. These can account for South American smoke words such as the Guipinavi, dema; Traiana, iema; Maypures, jema; Guahiba, sema; Caberi, scema; Baniva, djeema; and so on. The Mandigo word duli (to smoke) which also occurs in the same form in Toma and Bambara, and in its variant forms nduli and luli in Mende, can be found among the American languages Carb, Arawak, Chavantes, Baniva, Acroamirin, and Goajira.[6]”  He also gives several citations of ethnic American names duplicated only among the Berbers, and nowhere else in the world.

In total one can observe, that professor Sertima gathered magnificent evidence to prove his thesis, which seems to be very convincing, or at least worthy of attention. His point of view is not firmly established in historical science, so Sertima invites us to learning new facts and discussing them in order to depict a true picture of intercontinental relations before and after Columbus.

They Came Before Columbus by Ivan Van Sertima. (2017, Mar 16). Retrieved from https://studymoose.com/they-came-before-columbus-by-ivan-van-sertima-essay 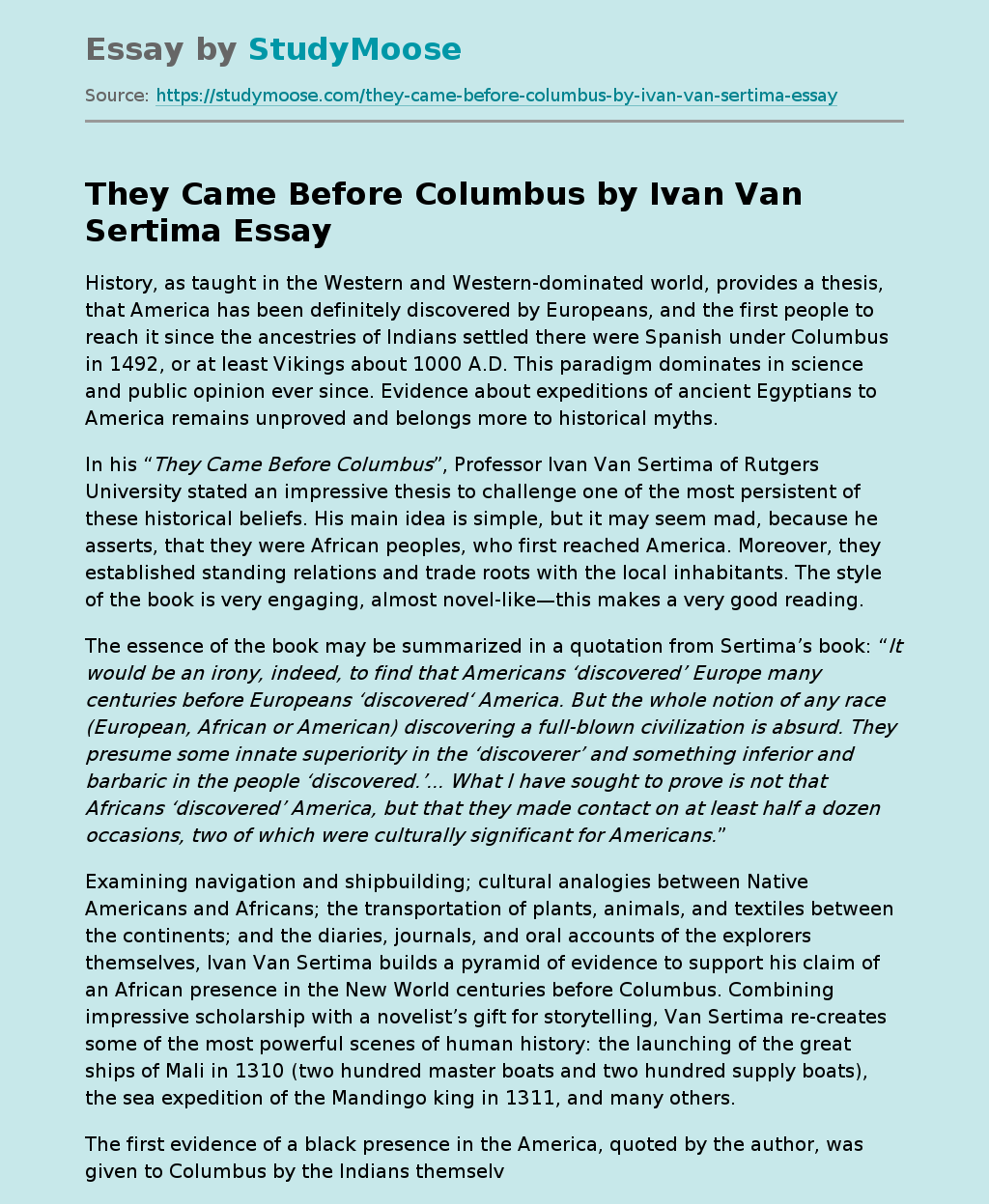