The Death of Ivan Ilyich is the novella written by Leo Tolstoy. The novella was published for the first time in 1886. It reflects the life of a conformist namely Ivan Ilyich who spends a major part of his life following the traditions set by the Bourgeois Society. Ivan’s whole life goes waste in the quest for happiness. On the deathbed, he gains the true enlightenment but the time has passed never to return. In the novella, Leo Tolstoy exposes various facts of Bourgeois society in a logical fashion.

Don't use plagiarized sources. Get your custom essay on
“ The Death of Ivan Ilyich is the novella written by Leo Tolstoy ”
Get custom paper
NEW! smart matching with writer

The novella starts when the main character of the novella is on the deathbed. After his death, the past life of Ivan is described in a highly interesting way. Tolstoy highlights different phases of Ivan’s life; from his childhood to the time when he becomes completely helpless. Reading through the novella of Tolstoy, a reader comes to know about the true feelings of Ivan when he is on his deathbed. Alienation is the major theme of the novella along with various other minor themes.

Leo Tolstoy tries to describe the relationships existing between the aristocrats and the poor peasants of the society. The main character of novella falls prey to physical degradation while making progress in the society.

The use of irony in the novella reflects great intellect of the author.

Undoubtedly, Ivan leads the life of a selfish man following the traditions of the Bourgeois Society; he does not have an independent thought to bring about a change in the society. In other words, he acts like a machine that operates under the built-in functions; similar to a robot. Ivan does not compromise with those people who do not agree with him. He disconnects himself with those people. Ivan pays more attention to his work; instead of paying attention to his wife and children. Despite being present at home; Ivan does not spend his time among his family members; he spends most of his time among his visitors.

With the passage of time, his family members lose their interest in Ivan. They start keeping a distance from him indeed. Similar to his professional life his personal life is dissatisfied and formal; he does not get Frank to the others beyond a certain limit. In fact, he serves his vested interests by and large. By virtue of staying away from his wife and children, he falls prey to alienation. Ivan says that he thinks he is climbing up the hill; in fact, he is going downward; in other words, he is making worldly progress in the eyes of the society; in fact, he is going away from the real peace of mind and contentment of heart.

Alienation is the major theme of the novella. Of course, the alienation does not descend upon Ivan; instead, he himself rises to it. Ivan needs worldly progress living in the society of aristocrats. Most of the people living in that society serve their vested interests; in other words, they are selfish to the extent that they maintain good relationship only with those who provide them with any convenience in the form money or support. When Ivan does not find his desired position in the University he shifts to St. Petersburg in order to find a better job than the previous one.

Ivan confines himself to his certain limits that result in alienation. Ivan’s sickness adds fuel to the fire; he falls prey to alienation more than ever before. Only, one of the servants namely Gerasim looks after him till the time of his death. Running after wealth and worldly happiness, Ivan behaves with other in extremely selfish manner; the result comes in the form of alienation because the true happiness exists in the selfless relationships; the man is a social animal indeed. Despite getting a lot of things in life, Ivan cannot be able to get true peace of mind and contentment of heart for which he has been craving for till the time of his death. For a short time, he gets enlightened but life does not let him do anything worthwhile.

The novella has been written in the context of Bourgeois society. Right from the beginning, Tolstoy informs us of the selfishness and baseness of the society. Instead of showing any interest in serving humanity, the majority of the people looks involved in serving its vested interest; one person takes advantage of others’ money or position for the sake of gaining worldly comfort and ease; once the motives or desires are fulfilled the loving and warm relations turn cool and dead. In fact, the people in the Bourgeois society live an artificial life deprived of compassion, love, sympathy, and emotions.

Reading through the novella, we come to know that true pleasure and joy lies in the selfless relationships. A man has to maintain good relations with others in order to gain true satisfaction in life. When Ivan gets seriously sick and confines to the bed; he comes close to a servant namely Gerasim; she serves him seriously. Here, Ivan realizes the true meaning of life. Gerasim feels the pain and restlessness of Ivan. This is how Tolstoy makes an effort to realize us of the importance of a selfless service. Also, Tolstoy wants to teach us that every human needs a sympathetic shoulder to lean on.

For the true peace of mind and contentment of heart, the people have to come close to one another. They are supposed to realize the pain and problems of others putting aside their vested interests. Gerasim’s character is a foil to the other selfish characters of the novella; for example, Ivan’s family members turn deaf ears and blind eyes to Ivan’s sufferings. Ivan, who during his whole life never comes close to a poor person, has to be dependent on a petty servant wholly and solely; it is the irony of the situation. Also, it is ironic that Ivan’s family members leave him to his fate instead of looking after him properly. Also, we can say that Ivan himself is responsible for his helplessness because he has never tried to maintain good relations with his family members. The role of fate cannot be put aside either.

A minor accident of Ivan’s life turns him into a permanent patient. Ivan doesn’t know that his all efforts for the worldly comfort and easement will go waste on account of sickness. The fate puts him at the mercy of those persons who cloud never dare to touch his hand when he was enjoying a sound health. Ivan is the true representative of the Bourgeois society; selfish, mean, and materialist. Ivan’s perspective changes in the ending days of life when he totally depends on others. Despite attaining enlightenment, he cannot do any good deed in the ending days of his life. Tolstoy has beautifully tried to show that people realize the true meaning of life reaching their ending days; in other words, the truth gives them nothing but repentance.

Reading through the novella, a reader comes to know of Ivan’s inner as well as outer life. Of course, Tolstoy is a great philosopher who points out different issues of life that are generally ignored by a common man. Not only the issues are pointed out but also their solution is devised by Tolstoy in a highly logical and convincing fashion. To the chapter number IX; Ivan’s outer life is exposed to us. He has been making efforts to gain worldly comfort. Ivan, being a materialist maintains good relationship only with those who serve his vested interests. Ivan keeps a distance from those persons who provide him with no benefit. This is how he disconnects himself with his family members and social circles.

There is no sign of spirituality in Ivan’s life until he falls prey to serious sickness and confines to the bed. Ivan is mistaken being considering the worldly progress as a spiritual progress. Moreover, he believes in the proverb that everything is fair in war and love. For money and position, he wants to cross all limits as per the tradition of the Bourgeois society. Putting aside the importance of spirituality, Ivan totally depends on materialism. As a result, he remainsdepressed, tensed and tired but he never tries to find out the solution to his inner discomfort by exploring the spiritual world. After spending a major part of his life, Ivan turns to spirituality on account of a disease.

The disease occurs to him by virtue of a very minor accident. With the passage of time, the intensity of disease confines him to the bed. This is the time when Ivan realizes the true meaning of life. Being under the fear of death, he falls prey to Alienation in the beginning. Gerasim is the only servant who stands by him at the time of trouble. Gerasim realizes Ivan’s feelings and discomfort of his soul. Tolstoy knows human nature very well; he has beautifully depicted the picture of human nature through the character of Ivan. In the beginning, Ivan fears of death and falls prey to loneliness; after some days, he begins to gain spiritual strength. His journey kicks off from physical to the spiritual progress. With the passage of time, he becomes fearless. The mental depression no longer exists since he has stepped in the spiritual world. Tolstoy has beautifully conveyed his message that the real joy and pleasure exist in spirituality.

The novella written by Tolstoy in the second half of the 19th century beautifully depicts the picture of Bourgeois society. The society is fallen into materialism. No person helps other without any interest. Everyone is making effort to gain maximum benefits at the expense of the others without spending anything. Ivan, the main character of the novella truly represents the characteristics of the society. In the novella, we observe the irony of situation at various points. Also, Ivan’s spiritual transformation is worth mentioning here.

The selfish materialist and reserved Ivan explores the spiritual world on account of his extreme sickness. Tolstoy has also tried to teach us that spirituality lies in the selfless service. The family relations also assume great importance in life. In the quest for happiness, man disconnects himself with the society; eventually, he falls prey to alienation. Alienation and Spirituality are the two major themes of the novella. Undoubtedly, the novella is the description of a person who enters the spiritual world after experiencing the hardships of life.

Essay on Contentment • Essay about Mind

The Death of Ivan Ilyich is the novella written by Leo Tolstoy. (2019, Dec 18). Retrieved from https://studymoose.com/the-death-of-ivan-ilyich-is-the-novella-written-by-leo-tolstoy-example-essay 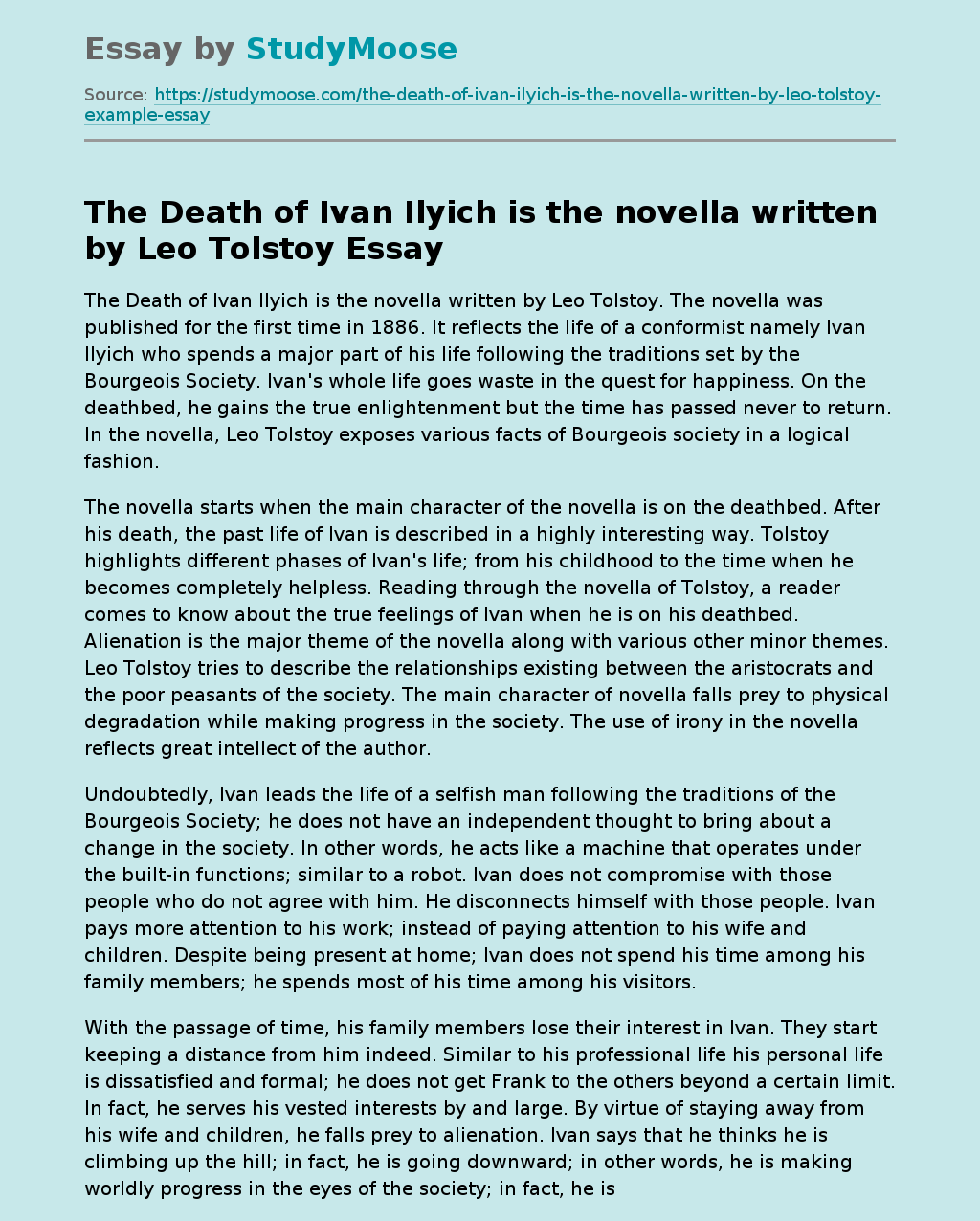