Analysis: “How much Land does a Man need” by Leo Tolstoy

As Humans, we have desires that make us take possession on something more than what we have to benefit us. In this short story, Leo Tolstoy delivers the message that greed, in the end brings us nothing but death itself. This story tells us that even if we have enough that we can get by the odds of becoming wealthier is so seductive to us that we are ready to loose everything we love.

Tolstoy starts his story with two women and their argument in whose life is better.

Don’t waste time
Get a verified writer to help you with Analysis: “How much Land does a Man need” by Leo Tolstoy
Hire verified writer
$35.80 for a 2-page paper

Is is a life with or without ownership? As they continue, the owner of the house, Pahom, joins and agrees that life without possessions is better hence the fact that they will have no temptations towards wealth and not fear the devil. In this story, devil is greed. But he, himself thinks about having land of his own so he wouldn’t fear the devil. From the beginning, Pahom is a hardworking man, but he makes the mistake in thinking that more land would give him a better life.

He says it himself: “If I had plenty of land, I shouldn’t fear the devil himself!” When he gets the shot at buying his own land, he jumps into the chance with the mentally prepared mind that will be happy with more land. Even if he had a lot or fertile land to grow crops on and not pay fines for his animals, he was not satisfied. “Pahom was well-content and everything would have been right if the neighboring peasants would not have trespassed on his cornfields and meadows”, so even if had more than enough land, he looked up fo more land.

This reflects the characters greed. Pahom would be fine and happy with the extended land but the human instincts made him get greedier and greedier as time went by.

As the story progresses, Pahom’s behavior reflects the message that greed has no line. As Pahom’s land expanded, he got into many riots with his neighbors which led him to move to different and larger land. Whenever he got into riots like this with his new neighbors, he moves into new land to satisfy himself; reflecting the greed in him growing.

Once, a tradesman passing by told him about a lot of land sold for less money. “If I take it out there, I can get more than ten times as much for the money” so, he abandoned everything that he worked so hard on and left for inspection on that land. The land was obviously just the way the tradesman described. His greed just got out of control and it took over him. He was exhausted walking all day and he tried making it back to his meeting place before the day was over. But, due to his weak body, he was defeated, and made one last battle wondering, “there is plenty of land but, will God let me live on it”. He had taken this journey too much and died in the process.

Throughout this story, Tolstoy was trying to tell us that human nature pushes us for more than what we need. Many of us think that having ownership makes us happy, in fact it does, but we need to understand that once the process starts, there is no end until the death. That was Tolstoy was reflecting, in the end all he needed was a piece of land.

Analysis: “How much Land does a Man need” by Leo Tolstoy. (2016, Apr 18). Retrieved from http://studymoose.com/analysis-how-much-land-does-a-man-need-by-leo-tolstoy-essay 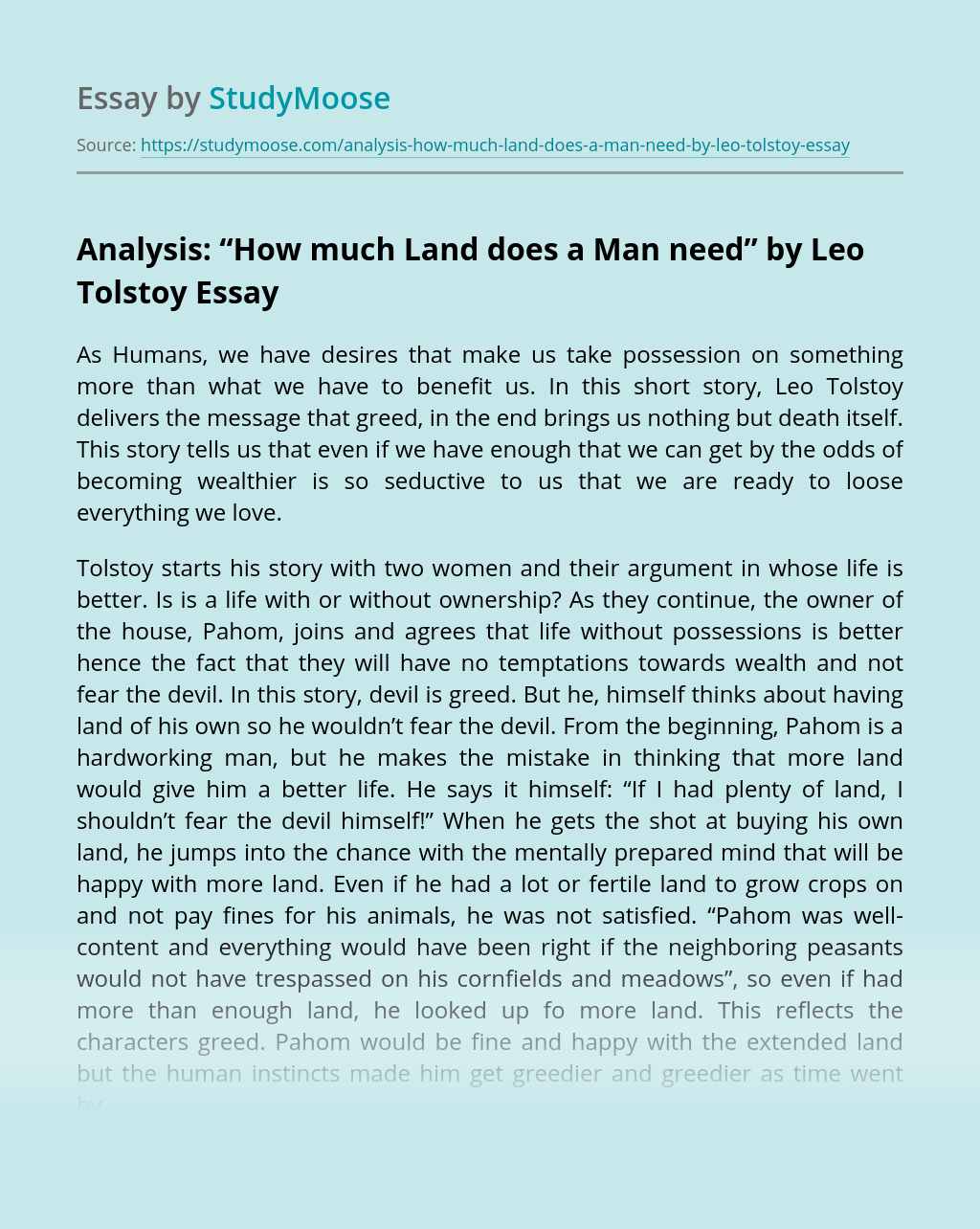 Don’t waste time
Get a verified writer to help you with Analysis: “How much Land does a Man need” by Leo Tolstoy
Hire verified writer
$35.80 for a 2-page paper
Stay Safe, Stay Original