One Day in the Life of Ivan Denisovich Analysis

Joseph Stalin strategically came into power in communist Russia in the 1930’s. Within just a few years, he turned Russia from a communist state into a totalitarian dictatorship. Few people chose to speak out against Stalin, but those who did were put into Siberian work camps or gulags. Alexander Solzhenitsyn was one of the few that chose to speak out against Stalin and his totalitarian regime. He used his years in the work camps to illustrate a vivid portrayal of what camp life was like in his book, One Day in the Life of Ivan Denisovich.

Don't use plagiarized sources. Get your custom essay on
“ One Day in the Life of Ivan Denisovich Analysis ”
Get custom paper
NEW! smart matching with writer

The novel is a criticism against Stalin’s communism, and is a commentary on why a communistic system will never work. Three of the biggest ways the novel critiques communism are: by attempting to dehumanize Russian society, displaying forms of unjust punishment, and arguing the importance of faith.

Solzhenitsyn propagates the radical idea that communism doesn’t work. Communism is the idea that everyone in society receives equal shares of the benefits resulting from labor.

It teaches the poor to rise up and attain financial and social status equal to that of the middle-class. In order for everyone to be on the same level, wealth is redistributed so the members of the upper class are brought down to the same financial and social level as the middle class (Coffin 660-665). In theory, communism is presented as to be a utopia where everyone has adequate food and shelter but in the novel One Day in the Life of Ivan Denisovich, it is clear communism in practice is very different from communism in ideology.

The communism Solzhenitsyn presents in this novel actually tries to take away any form of human dignity. The story takes place in a Russian prison camp after World War II. The protagonist is a man named Ivan Denisovich Shukhov, but referred to as Shukhov for most of the novel.

The author refers to Ivan as Shukhov to emphasize the how the camp sets him at a cold, official distance. “Ivan” is Shukhov’s first name and Denisovich is his patronymic, a name that is derived from one’s father’s name. In Russian society, addressing someone by his or her first name and patronymic is cordial but respectful. The early Soviet Communist regime tried to eradicate this form of address because the respect it entails suggested class differences among people, something communism seeks to destroy. On the other hand, addressing someone by his or her last name has an official meaning. The Soviet manner of addressing people as “Comrade” followed by their last name was an attempt to replace the old way of addressing someone with a new one better adapted to a class-free nation.

“Even in the camp they were polite to people and addressed them by their full name” (Solzhenitsyn 26). The prison camp workers always addressed each other with the same degree of respect in order to preserve each other’s dignity. The labor camp in which Ivan is imprisoned is designed to oppress and dehumanize its prisoners. The living conditions are simply unbearable. The mattresses do not have sheets, prisoners share tiny portions of bread and porridge per meal, and the guards force the prisoners to undress in sub zero temperatures for body searches.

The camp replaces the prisoner’s names with letter and number to erase all hints of individuality, “S 854…three days penalty work,” says the new warden to, Ivan as punishment for not getting up on time (Solzhenitsyn 7-8). The camp gives everyone numbers and makes them all dress identically take away their identities, “from the outside, everyone in the squad looked the same- their black coats were identical-but within the squad there were great distinctions” (Solzhenitsyn 15).

However, Denisovich does not accept the camps attempts to dehumanize him. He shows maintaining human dignity does not have to be achieved through violent rebellion but rather, through developing a system of personal rules. For example, at meal time, no matter the conditions, he always removes his cap before eating, “then he removed his hat from his clean-shaven head- however cold it might be, he could never bring himself to eat with his hat on” (Solzhenitsyn 16). From his childhood, this practice gives Ivan a sense that he is behaving in a civilized manner.

No matter how famished he becomes, he never stoops to Fetyukov’s level, begging for scraps. He scorns Fetyukov’s behavior, which he believes is inhuman. Ivan may be treated like an animal by the Soviet camp system, but he subtly fights back and refuses to submit. In one instance, Shukhov is tempted to ask a fellow prisoner for a cigarette which the other man has already half smoked but, “but he would never lower himself… he would never look at a man’s mouth” (Solzhenitsyn 27).

Ivan never allows the labor camp to get the best of him but gets punished for things one in his control on top of being imprisoned. Another criticism of communism throughout the novel is the description of unjust punishment upon the prisoners. In the beginning of the novel, Shukhov does not get up on time because he is sick and is then threatened with three days in the hole. Similarly, Buynovsky receives ten days in the hole for trying to bundle up against the cold with a flannel vest. Neither Shukhov’s illness nor Buynovsky’s attempt to stay warm harm anyone, but the camp treats both as strict violations of the law, worthy of severe punishment. Such harsh punishment for such petty offenses is absurd. These men are already locked into arduous prison sentences, heaping on unfair and illogical punishment upon them is just a brutal exercise of power by the guards. Through this unjust treatment one thing that help the prisoners survive was having faith in something whether it is a strict moral code or faith in god.

One of the main goals of communism was to eradicate religion from society. According to the founders of communism religion hinders societal progress; it was Marx who said “religion is the opium of people.” Solzhenitsyn implies it is much easier to get through hardships with faith in something rather than without. During a march, Shukhov thinks of Alyosha, the devout Baptist, he wonders, “What had he to be happy about? His cheeks were sunken, he lived strictly on his rations, and he earned nothing. He spent all his Sundays with the other Baptists. They shed the hardships of camp like water” (Solzhenitsyn 38). Shukhov is making the point when you believe in something, like religion, it is much easier to keep a positive attitude and survive a terrible situation.

Although Ivan does not mention religion for most of the novel, his final conversation with Alyoshka, reveals faith can be a means of survival in the oppressive camp system. Ivan adheres to a strict set of rules, like always taking off his hat before eating or trying to waste as little as possible. Alyoshka, has faith in god and the human spirit “for my part I am not ready merely to be bound but even to die for the name of the Lord Jesus” (Solzhenitsyn 163), this comment really affects Shukhov to a point where he begins to reflect on his own philosophy. Shukhov’s s sense of inner peace in the novel’s last paragraph, which resembles Alyoshka’s sense of inner peace throughout the novel, demonstrates that religious faith offers strength in the face of difficulty.

Having any type of faith can carry someone through hardship, religious faith is simply one type of such a faith. Though the labor camps were filled with suffering and misery, the men continued to exhibit acts of humanity in their day to day lives. The only way these men could have survived this inhuman treatment was by subtly fighting the system in their own personal way. Solzhenitsyn uses three simple yet powerful ideas: the dehumanization of the human society, displays of unjust punishment, and the importance of having faith in no matter how awful the situation is, to speak out against Stalin and the terrible consequences of Russian communism.

One Day in the Life of Ivan Denisovich Analysis. (2017, Jan 10). Retrieved from http://studymoose.com/one-day-in-the-life-of-ivan-denisovich-analysis-essay 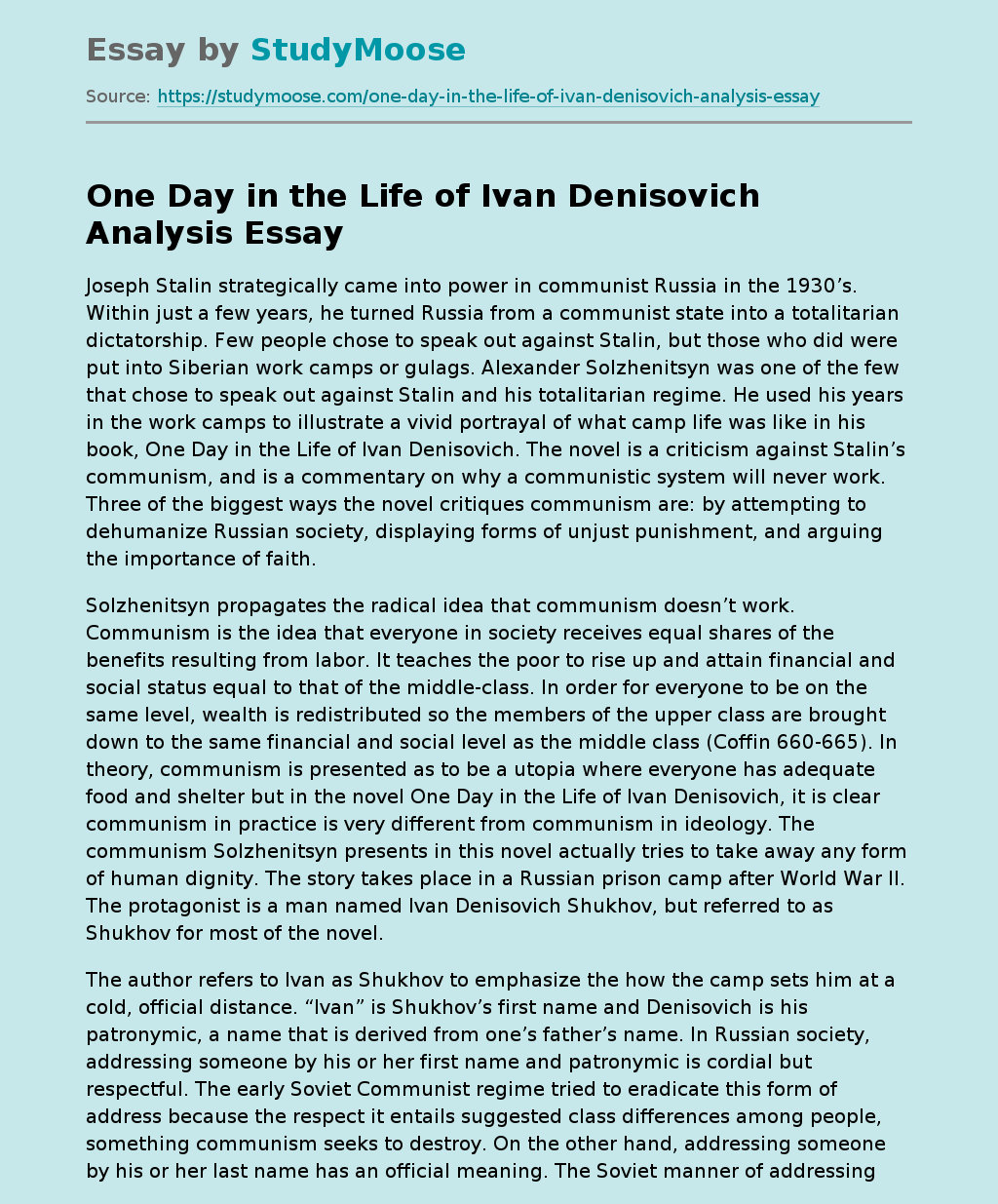