One Day in the Life of Ivan Denisovich Dehumanization

Don't use plagiarized sources. Get your custom essay on
“ One Day in the Life of Ivan Denisovich Dehumanization ”
Get custom paper
NEW! smart matching with writer

He is given instructions every second of the day, and has no say in how to live his life. Dehumanization occurs when people view others as less than human, therefore not giving them the moral respect they deserve as humans. In this particular Stalinist labor camp, in which the main character Ivan Denisovich Shukhov is imprisoned, the officers are instructed to attack the prisoner’s dignity, therefore they are taking away their humanity, treating them like they would treat a cattle, not people.

Proficient in: One Day in the Life of Ivan Denisovich

As soon as the novel begins, so does Shukhov’s day.

When he opens his eyes, he already knows how the day will proceed, because all days are the same. He must go for breakfast at the same time every other prisoner does. This shows that he doesn’t have a say in when to do things, even such a basic need that many take for granted. Yet he does not complain, this is due to the fact that food is valuable to him and he has limited access to it.

The prisoners are not only instructed when to eat, but they also have to compete for food, the same way a group of chickens would fight for some grain.

This fact is clearly shown when the narrator describes the scene shortly before Shukhov receives his meal, “the cook shouted through the hatch, and people were shoving at him from the other side ” (86). This shows how the workers have to fight to their food, as if they were savages. The cooks treat the men like one would treat a dog; throwing food among a large crowd, thus making the “dogs” fight for their food. This is inhumane and takes away the prisoner’s dignity.

It is just one of the many meals that Shukhov will have during his stay in the labor camp that represent the motif of dehumanization, and not only that, also humiliation. As humiliating as it is, the prisoners are grateful for any type of meal they get, “A bowl of thin cabbage soup, half burned, was as welcome to them as rain to parched earth. They’d swallow it in one gulp. That bowl of soup—it was dearer than freedom, dearer than life itself, past, present, and future ” (126). The prisoner’s minds are set the way an animals mind is, they only think about food, and it is their main reason for living.

They have stepped to the level of an animal and lost their humanity and any hope in achieving anything else in their life. Another way in which the prisoners in this novel were dehumanized was the fact that they could not own anything that the officers found too dangerous. However, the officers took advantage of this and would not give the laborers any freedom. For example, Shukhov had to hide a loaf of bread in his mattress so he doesn’t get punished in one of the daily searches, “Stich, stich, stich, and the little tear in the mattress was ended, with the bread concealed under it” (25).

This proves that the prisoners feared the officers, and the consequences that would come with not following the directions. Another way that the prisoner’s identity was taken away from them was that they were assigned numbers for easy identification, in an effort to dehumanize them. By numbering them they were once again treated like animals, a way that cows are labeled on a farm, and not like individual humans. To continue, officers in the camp play a big role in the dehumanization process of the prisoners. The officers are in charge and treat the workers without any respect.

The guards use forced labor and cruelty to dehumanize the workers. This is shown when the narrator himself compares the workers to animals, “…the fellows bringing the mortar were winded like horses” (124). The prisoners were not only compared to horses, but also mules, hawks, and wolves. The officers treated the workers as if they were animals, therefore, they did not see them as human beings. This is shows when the narrators says, “ He wouldn’t treat us like human beings; now let him burst himself shouting” (118).

The officers looked at the prisoners as less than humans. The officers were the ones that took away the prisoner’s identity and humanity In conclusion, a key motif in the novel, “One Day in the Life of Ivan Denisovich” written by Alexander Solzhenitsyn is dehumanization. Prisoners in this novel are treated not as humans should be treated but as animals. They are gathered in crowds to be fed and counted. In this way the officers strip them of their identity and their humanity. Leaving behind only humiliation and disrespect.

One Day in the Life of Ivan Denisovich Dehumanization. (2016, Sep 10). Retrieved from http://studymoose.com/one-day-in-the-life-of-ivan-denisovich-dehumanization-essay 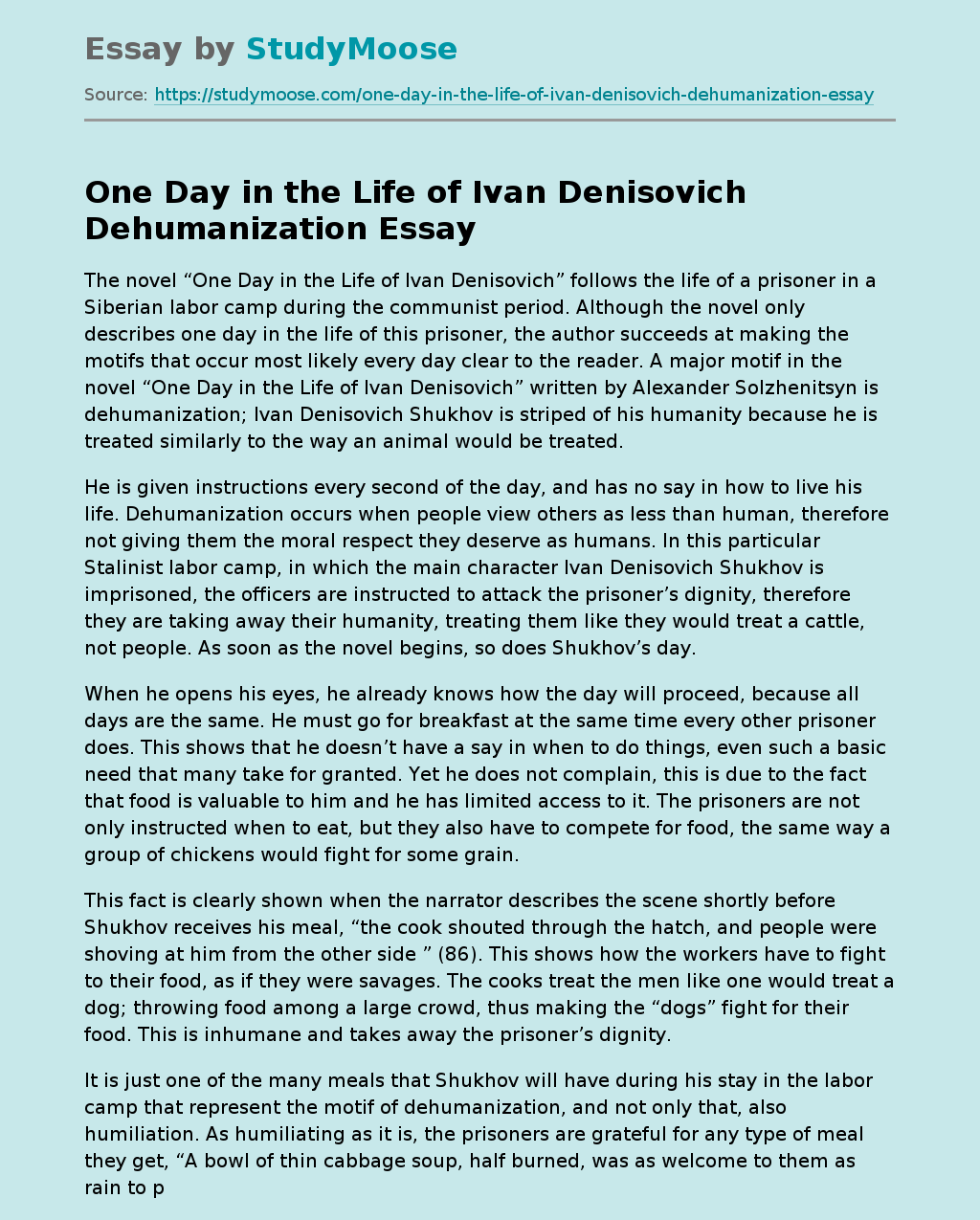